Having spent all NXNE-weekend in full-on alt country mode, I knew that Monday night's Mod Club set by UK ghouls The Horrors would be a shock to the system. But that's exactly the challenge I wanted, and why I accepted the offer from the fine folks at Musebox to attend. I knew of The Horrors' reputation for mayhem getting them banned from venues, and while I may not exactly have a steady diet of spooky distorted ear-splitting screamo goth, in my youth I experienced enough pit-induced broken bones and bloodied noses to prepare me for anything, right?

First off, I'd be remiss if I did not give a hearty high-five to opener 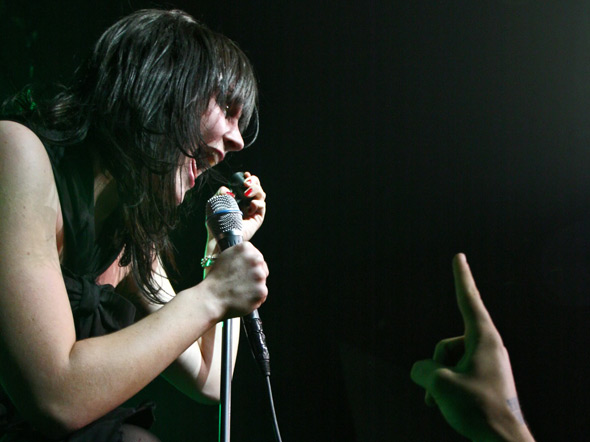 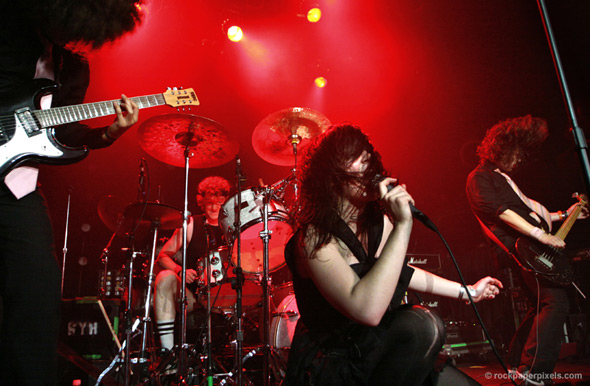 . Front gal Ryann Donnelly has quite a set of lungs, and is apparantly operatically trained. Her wide-eyed wails have hints of Nina Hagen and Siouxsie Sioux, and with hands firmly on her hips and hair tossed from side to side, she commanded the crowd like a little perky goth Emily Haines.

By about 10:45 the crowd was getting restless, chanting and pounding anything they could get their hands on. Finally, the Horrors took the stage in grand style, throwing themselves up there like boney carcasses. Rather than use the Mod Club's usual bright professional stage lighting, the Horrors chose tones much more... well, horrifying. Stark white backlighting or dim red and blue gels specifically designed to accent cadaverous skin tones AND foil photographers, of this I am certain. 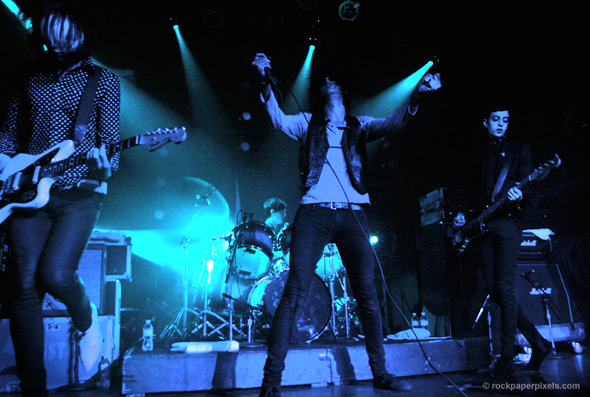 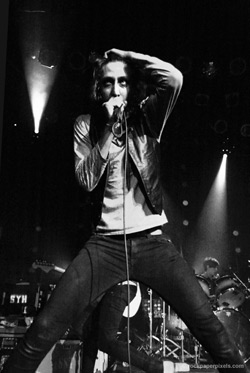 I really can't in good conscience review their songwriting or lyrical quality (who could hear the lyrics anyway?) because in all honesty I'm pretty unintiated to this band, so to judge that would be unfair. But I can say that their stage drama and theatrics were top notch. Lead Horror Faris Badwan likes to continuously pull people up on stage and then fling them back into the crowd, and he had no shortage of enthusiastic participants. When I wasn't dodging fists and flailing legs, I was totally transfixed by his stylistic marriage of Sid Vicious and Stooges-era Iggy Pop. Alternatively pacing in tight circles, clutching at his electrocuted hair, and crumpling to the floor, Badwan's antics seemed too genuinely spazzed-out to be just a pretense. One wonders what goes on in this man's head.

Badwan was backed by a surprisingly solid rhythm guitar and drum duo, and a keyboardist who plays the perfect Brit-rock Igor to his Dr. Frankenstein. The Horrors finished their frenzied set in just under 45 minutes by crowd-surfing Badwan out over the length of the audience and onto the bar at the far side of the room. He then flung himself off the bar and disappeared into the crowd - 10 songs, no encore, and then they crawled back into the hole from whenst they came.