Under the category of bands that kicked my ass at NXNE '06, the Hot Springs got things going in the murky bowels of the infamous Comfort Zone last night... de-sketching things a bit from the usual CoZo tip with their "first sober show ever!".

Their sound is a collection of different things that I like about Canadian indie music: pop, rock, loud, quiet, fast and slow. The songs are not all of these things at once, but arranged in a way that it all comes across at some point. The Hot Springs are fronted by the fiery Giselle Webber, with her signature cowgirl boots and oft-possessed by some foot-stomping poltergeist.

They played songs from their upcoming album, including "Phantome Dinosaur", "Head Rush", "Tiny Islands", "38th Adventure", and "Fog & Horn". It's been over a year since I started the wait for a full-length release. Unfortunately, they didn't announce anything about the album... but when it finally hits the streets, expect that "bong-load of riffs" to be an instant indie classic. 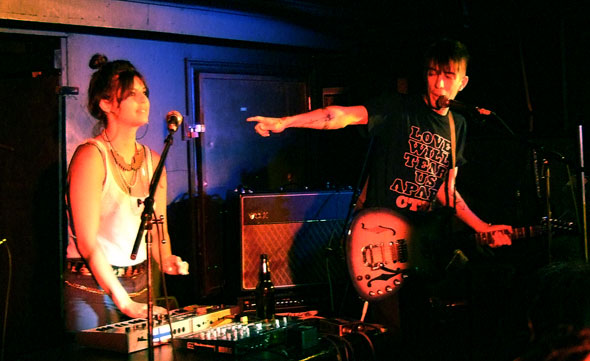 The Handsome Furs arrived 20 minutes before their set, just in time to receive the Galaxie Rising Stars award. While it wasn't in the form of an oversized novelty cheque, as Dan Boeckner joked, he did promise to the crowd that he would not spend the $3000 on cocaine (note to Dan: promises made at the Zone do not have to be kept). 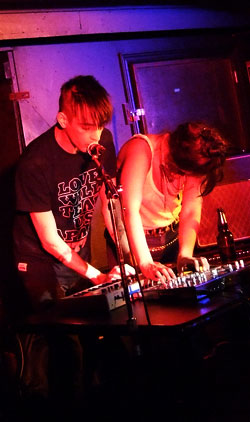 Their live act consists of Dan on guitar/vocals, and his fiancĂŠe Alexei Perry (decked out in fantastic trailer park chic) on the drum machine and keys. They opened with "What we have," which is also the opening track on their album (Plague Park, on Sub-Pop). The Handsome Furs' style is dark and brooding, with drum/bass loops that have an 8-bit Nintendo flavour (repetitive, yet entrancing). For two people and a reportedly minimalist bent, they filled the space with plenty of sound. Dan's haunting vocals explore a variety of subjects from his past, including songs about Vancouver ("The Handsome Furs Hate This City") and his hometown with the world's largest hockey stick. They also threw in a great cover of Tom Petty's "You Got Lucky" as the finale.

Listening to their music, you can see how Dan's style has influenced the sound of his past projects, much in the same way that Andrew Whiteman's contributions to Broken Social Scene are evident in his solo work as the Apostle of Hustle.

What can I say about the Handsome Furs? I was a bit skeptical at first, convinced that the hype was solely based on Dan's involvement with Wolf Parade. I had listened to Plague Park many times in anticipation of attending this show, but it hadn't grown on me yet. After seeing them perform live, I'm convinced it's more than just hype. This duo has a something unique to contribute to the Canadian indie soundscape, and I hope they continue to develop their style in subsequent releases.