Toronto's once-vibrant and once-massive rave culture has seemed to many to have been dead for a while now. It certainly isn't discussed in the media much any more, and the most I hear these days is either "Raves still exist? What??" or rambling about the Klaxons and the "Nu Rave" title they apparently loathe so much.

As someone who is more deeply engrossed in electronic music than analog, I'd have to say that underground electronic music culture is most certainly not dead in this city. I will admit, though, that if you don't know what it looks, feels and sounds like these days, you may not always realize what it's evolved into... and if you're just looking for what it used to be ten years ago, you're not going to find much but dying remains.

To the average hipster, dance music and rave culture are things that lost their coolness factors quite some time ago, and in a time when Toronto's once-massive party scene has been reduced to clubbers at the Guv and sweaty minors at the Big Bop, I really must concede that things have gotten pretty lame.

Nowadays, for me to go out to an electronic music event, I have to be pretty impressed by who's organizing it, who's playing it and where/how it's going to take place. Putting these things together, I was immediately excited when I heard about Robotpilot and Airhead's Temple of Dreams, and in the end was even more impressed than I'd anticipated.

Organized by some of the most authentically cool people in Toronto's independent electronic scenes and with one of the freshest lineups in quite a long time, this event was built out of both the older party scene and the newer experimental one, and most definitely managed to be both cool and a rave. It's about time!

It's also about time that Robotpilot threw their own party. The crew has been involved in Toronto's underground dance music culture for some time, running an independent clothing company through their website and booths at parties, and being an endless help to many an organizer in the local rave scene. This event was something perpetually anticipated by many people, and well worth the wait. 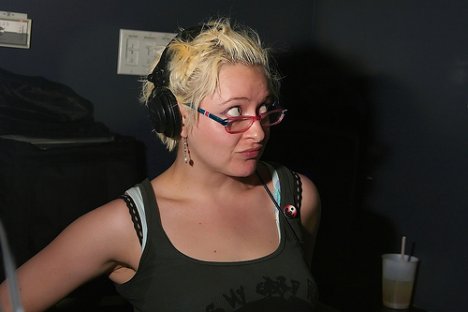 Part of the confusion regarding the state of local independent electronic culture is that independent electronic music (let's leave super-commercial and super-underground events aside) split in two directions, and it's the less interesting of the two - the older commercial rave scene that has been sitting around shrinking and going stale for the past few years - that seems to get the most recognition.

One part, consisting of parties based around high ticket prices, lots of advertising, and sure-thing commercial acts playing sure-thing commercial tracks, devolved into clubbing (such as in the case of trance and drum'n'bass) or collapsed into totally uncreative events that, to be brutally honest, few cool people really want to spend their time at (such as in the case of UK hardcore, which now exists almost exclusively inside The Big Bop and seems to survive primarily because the right drugs will let people enjoy just about anything). 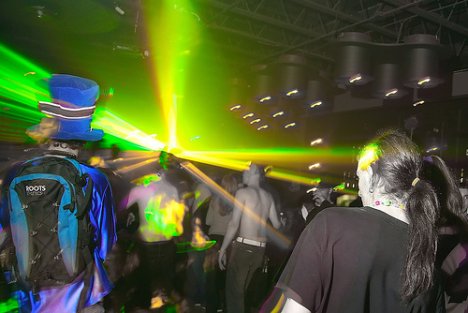 The other part, based on experimental styles, pay-what-you-can door fees, cynically low amounts of advertising and a "let's enjoy this whether anyone wants to show up or not" attitude, actually managed to pull off some accidental reverse psychology and gradually built up a pretty hopping experimental electronic scene for this city... and one which wasn't dependent on those in attendance being so high that they don't realize they'd rather be somewhere else.

The combination of the two in this two-room party made for a mix that was bound to please a healthy range of people, and I was surprised at some of the folks who wound up showing up - people who would never be caught dead at a happy hardcore party at the Reverb. 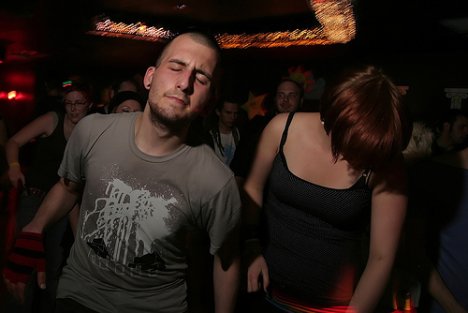 One room consisted mainly of oldschool UK hardcore along with a touch of oldschool house and trance, and was headlined by the oldest-school the UK can offer, DJ Luna-C. If you don't know, Luna-C is one of the most consistently creative producers and DJs in the history of UK hardcore, and has been for over 15 years - from before jungle's birth to after it's shift into drum'n'bass.

While most other people seemed focussed on how to most easily sell out and cash in, Luna-C has always been an important driving force in keeping the music alive and kicking. In my opinion, today he's one of the only people left standing in hardcore that are worthy of being called artists.

The second room, the one that really made my hair stand up when I saw the flyer, was split evenly between glitchy experimental breakcore and grime. The primary headliner was Chicago's Saskrotch (pictured rocking out at the top), specializing in Nintendo breakcore and other forms of glitchy 8-bit chiptunes. (Visit his site for MP3s.)

Normally, glitch and breakcore is a tough sell to a commercial rave crowd, but the room was full for his set and loving it. Something as simple as combining NES music with harsh, abrasive noise suddenly makes that noise extremely accessible to anyone under the age of 30, and people hardly seemed to notice what was happening to their ears.

Well, some candykids did complain on their way from the first room to the bathrooms and back, but frankly the happy hardcore crowd has become pretty stylistically elitist and the bulk of today's candykids don't seem genuinely interested in music, preferring instead to be interested in being interested in what they perceive as cool and unwilling to give anything else even two open-minded seconds. Their loss. I mean, c'mon, Nintendo breaks!

As for the grime, I'd been a little worried about Sean C's set, him being the biggest grime DJ on the lineup and given top billing (below Saskrotch) in the second room. Hailing from Hamilton and hosting Hostile Airwaves, Canada's first grime radio show, Sean C has definitely been an important force in spreading the sound on this side of the pond and deserves a lot of respect for that.

Unfortunately, lately he seems stuck on this "Grunk" idea, combining grime and crunk, and crunk... I don't think I even need to explain what's wrong with crunk. When Sean put out his True Grime Vol. 2 grunk mix CD, I found the crunk half totally ruined the grime half, and this was including grime tracks that are among my absolute favourites.

So, I wasn't totally looking forward to that, but any grime at a party sounds like a good thing to me, and the fact that this party was sporting more grime DJs than any local rave had dared thus far had me pretty excited. I figured I'd probably like part of Sean's set, and even if I didn't, I knew I'd like others on the bill.

Just a few hours before the party, though, I got word that Arcane (the MC who was to be accompanying Sean C) couldn't make it, and was going to be replaced with The UK Connection's MC Plain English and MC Alki Riddimz. 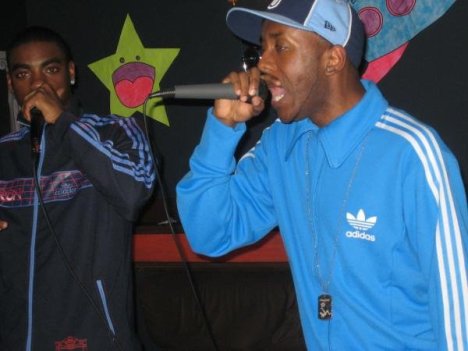 Depending on whether you pay attention to what's been happening in Toronto's growing grime scene, you might not've heard of these boys... but if you're into grime at all, you definitely should have. When people were saying "biggest grime lineup ever" (as far as raves go), the fact that the UKC was nowhere to be found was a glaring omission to those in the know.

The last-minute addition got me even more excited for the party, and the presence of these two on the mics turned a set that I'd expected to be my least favourite grime set of the night into my definite favourite.

I mean, DJs spinning grime is all well and good, but proper grime MCs coming out between the booth and crowd and throwing down in an intimate setting makes it feel like everyone is a part of something a lot more real... not just kids in Toronto getting drunk to British records, but like it's the early '80s and we're in some little place watching some little piece of hip hop be invented in front of us.

On top of this, the whole night of wicked music in the second room was accompanied by great visual projection mixing by my favourite local VJ, diss0nance. 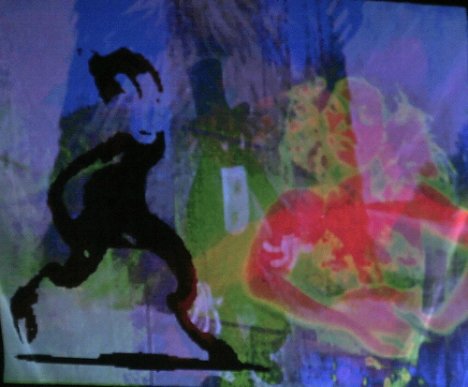 She did a variety of different things throughout the night, but my favourite was probably all the mashed-up graffiti documentary footage, complete with subtitles conveying solid things about underground art and culture.

Everyone in the first room was happy to relive the oldschool rave idea one more time, but those of us who stuck mainly to the second room got to take part in an event that, well not 100% innovative, was groundbreaking and unprecedented nonetheless.

No one was sweating on me, no one waved anything glowy at me, and - while it all just adds up to being my own opinion - the whole thing seemed pretty darn cool to me.