Delta Hotel in Toronto has nothing to do with Delta Airlines . Not the same company. Never was. In fact, what is known today as Delta Hotels and Resorts is actually a Canadian success story. The 40 plus location chain was founded in Delta, BC back in 1962 and has won numerous awards over the years.

The same cannot be said for Delta Airlines, arguably the more widely known Delta brand and one that doesn't have the most pristine reputation . Why do I even mention this? If you're like me, your brain likes to create associations that simply don't exist. Before I arrived for my one night stay at Toronto's newest downtown hotel I was fearing Delta Airlines quality but what I experienced instead was four star hospitality.

There was also this Toronto Star article . With that as a potential preview of things to come I was bracing for facilities at the hotel not to be open. I was prepared for weird smells. I was ready to pen my own woes of disaster but my experience could not have been more night and day.

Simply put, Delta Toronto is a hotel worth staying at. From its modern design to magnificent views there's a lot to like here.

Located on lower Simcoe about equidistant between Ripley's Aquarium and the ACC it's probably the ideal venue if your itinerary centres around a visit to either place. It's cheaper than the nearby Le Germain but has more to offer.

There's a nice pool (with views of the train tracks), hot tub and steam room, a decent enough fitness centre (mostly cardio but with some free weights and machines), meeting rooms named after local neighbourhoods (Hello Kensington!) and a connection to the PATH so you could plan a winter staycation here while minimizing exposure to the elements.

It's also a short walk to Harbourfront , nearby Steam Whistle Brewery , Amsterdam Brewhouse and the Rogers Centre, a Longos and steps from the York St. location of IQ Food Co. which has the best espresso (and healthy lunches) in the area. Oh, and there are these places too . 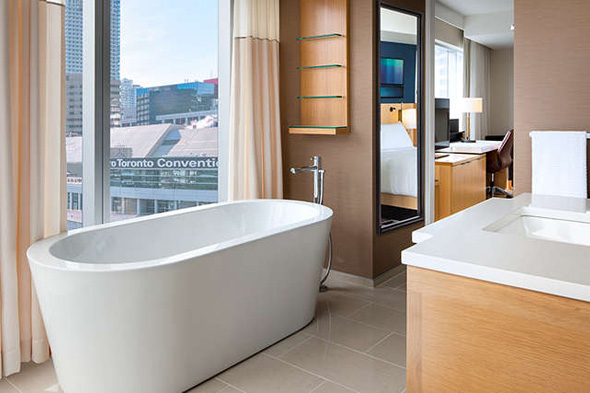 But what about the hotel? Let's start with the room. I stayed in a southwest facing corner unit on the 37th floor that is referred to as a Corner Deluxe ModeRoom ($199 per night). The view (from the bathroom) was stunning. From the larger soaker tub (don't worry, there are blinds) I could see a large expanse of the lakeshore, the area near the CN Tower, the downtown core around the CBC building and beyond.

The King sized bed was the scene to one of the more comfortable sleeps I've had this year. The toiletry products are by Apothia and when I asked the front reception for extra supplies they gladly handed over even more than what I thought I needed.

The room also came with a desk, various cords for electronic devices, an iHome speaker and alarm clock and, surprisingly, no mini-bar. 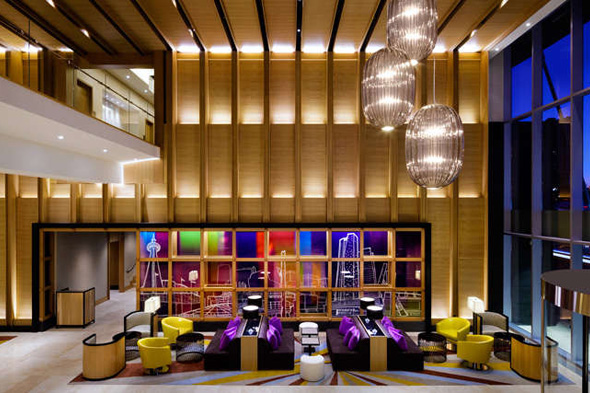 For many, the lobby is likely the showcase of the hotel with its bold colourful furniture, dramatic light installations and massive ceilings but I actually found myself more taken with the mezzanine where nooks and crannies offered refuge but still a vantage point to spy on the action below.

Off the lobby there's the new SOCO Kitchen + Bar . It wasn't that busy, but neither was Aria down the street. The Leafs were playing and everyone seemed to be at e11even and Real Sports Bar .

There's also a narrow cocktail lounge, Char No. 5 , where well dressed bartenders are trying their hardest. They make drinks like the Blackberry Smash but they probably served about 10 customers the night I was there.

Room service? Yes, they do that. And breakfast too. But these are all available at typical hotel prices so couldn't convince myself to pony up for either given all the options in the area, including a more affordable takeout counter and cafe that is part of SOCO. But maybe you will? Let me know how the $19 egg white omelette was in the comments.

A couple of final notes. WiFi. They have a free option (sites load kinda slow almost like retro AOL dial-up days) and a premium option ($15.95 plus tax for 24 hours) which is probably necessary if your plans includes watching YouTube videos or doing any sort of streaming.

There's also the matter of parking. Just don't do it. Your options are $42 (before tip) for valet or $35 for an underground parking lot with no in and out privileges. If you have a car, just park it further north and PATH it.

Checkout? A breeze. They even gave me a 4 hour extension beyond the regular noon checkout time. I'd come back. Not with a car and not without my bathing suit but the Delta is definitely in the mix for where I'd recommend someone stay when visiting Toronto. 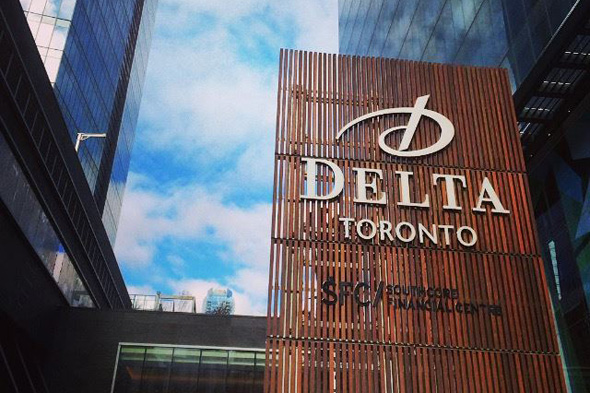