XPACE is one of the more recent victims of Ossington's rapid gentrification, having closed its doors at the end of last year due to rent increases. Thankfully, it did, however, reopen again this February in new digs near Dundas and Landsdowne. Previously the home of Vinh Hoa Bakery and Restaurant, XPACE's current location promises lower rents, a larger space and a much longer lease to ensure that its innovative programming can continue for years to come.

Founded in 2004, XPACE was originally located in Kensington Market before it made its way to Ossington. Over its numerous relocations, it's remained a non-profit, non-commercial gallery, funded entirely by the OCADU Student Union and programmed by its alumni. Typically, XPACE's exhibitions highlight local, emerging artists who are making waves within the larger artistic community, while maintaining short exhibitions runs allow it to "respond to contemporary issues in theory and aesthetics, keeping an up to the minute response to what is going on directly in our community," as reads its mandate. 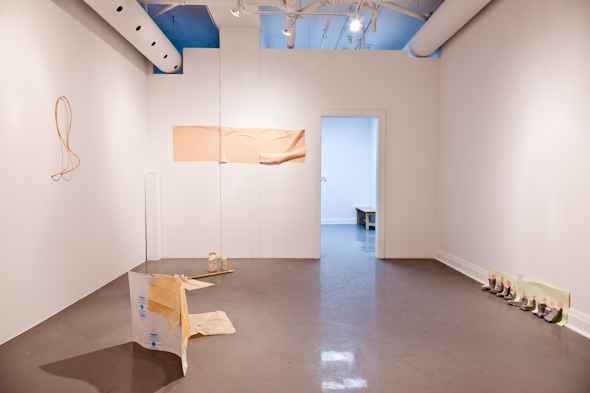 Of course, current students are a major presence within the centre. When artist students from OCADU display at XPACE, they're provided with support system that follows them throughout the exhibition process. Ultimately, their work is displayed alongside those of more established and international artists, placing their work in a professional context that goes far beyond the typical student gallery experience. Volunteers from the student body staff the centre, ensuring that even students in the curatorial programs get valuable hands-on experience. 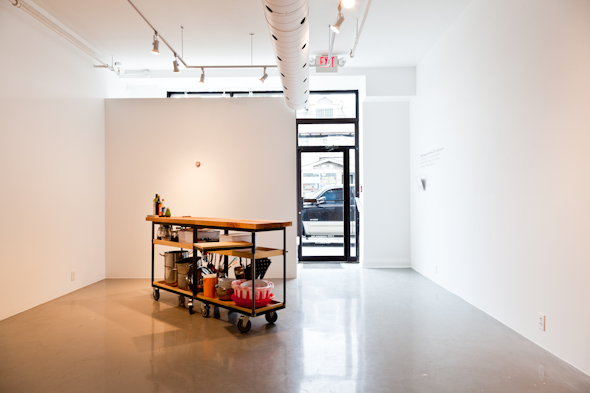 When I first paid a visit to XPACE two weeks ago, I arrived just in time to catch the end of the centre's spring programming. Though it had to jockey for attention on a strip blazoned with amateur graffiti tags and massive Tim Horton's billboards, Ella Dawn McGeough's stunning window display "Blinded By the Light" commanded attention. Formed by a collage of seemingly endless layers of holographic patterns, its kaleidoscopic effects were altered by how the viewer moved to catch the light. Inside, Laura McCoy's sculptures reworked mundane materials into a compelling challenge to traditional gallery displays and aesthetics.

Of course, XPACE's rapid exhibition lengths mean that they're now already well on to the next batch of shows. When I paid my visit, XPACE hosted work from local darlings VSVSVS , a film from Videofag founders Jordan Tannahill and William Christopher Ellis, and a group show curated by David Hanes on cultural identity and individuality in an increasingly digitalised world. As always, it looks to be a diverse lineup that shows the full breadth of Toronto's artistic output. 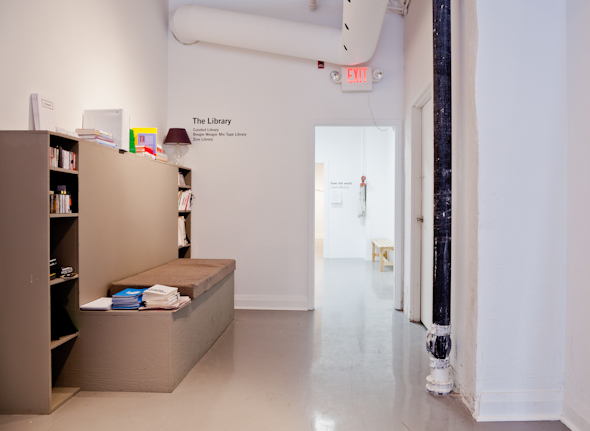 Of anything that survived the move, I'm most happy to see the Zine Library alive and thriving. The brainchild of artist and illustrator Alicia Nauta (who's also responsible for founding the OCAD Zine Library), XPACE's collection of literary miscellany now can now be found embedded within the custom-built bookshelf/couch hybrid that resides against a wall in the gallery's main space. It's cozy enough that one easily spend an hour or two perusing the work, all the while listening to selections from the Boogie Woogie Mix Tape Library, a curated sound project in which themed mix tapes are provided alongside the requisite Walkmans.

Though the new location is certainly spacious, I've got to admit that the basement of the Ossington place was a major loss. Its eerie vibe contributed a lot to the works displayed, and it was a great venue to catch a play. Most memorably (though Google is failing me right now), I caught a fantastically immersive installation that transformed the entire downstairs into a veritable forest, complete with artificial trees, bonfire, and woodland creatures. 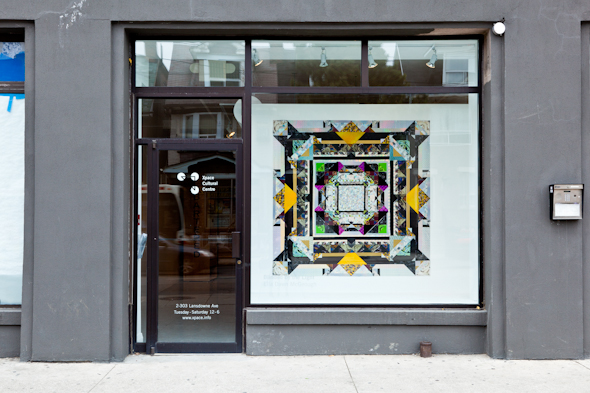 Now that XPACE has joined fellow Ossington expats TPW, MKG127, and Art Metropole, its clear that Toronto's traditional art crawl has found a totally new path. One can only hope that with the establishment of this "new Ossington," the condos take a little longer to roll in.