VSVSVS Gallery is currently open but their offerings and services may be affected due to the pandemic. Please contact the business directly for more information about any changes. Is this your business? Please contact us if you would like to update this message.

VSVSVS is a gallery in Toronto that doesn't rely on foot traffic or a board of directors to get things done. Instead it's an artist collective in the old school sense, seven University of Guelph graduates (amongst them Stephen McLeod, Wallis Cheung, Miles Stemp, Lora Kreviazuk, Ryan Clayton, James Gardner and newcomer Anthony Cooper) wanted to own their own gallery, so they made one themselves - building walls, hammering together their own ladders and making sacrifices, including sharing one bathroom and two hot plates amongst them.

So far they've curated seven shows since obtaining the space via Craigslist in May 2010, and organized a series of events, including a wedding between members Wallis Cheung and Ryan Clayton. Their expansive industrial warehouse is deceptively compact, loft spaces and secret storage units peek out behind holes cut out in the walls and self-made second stories. 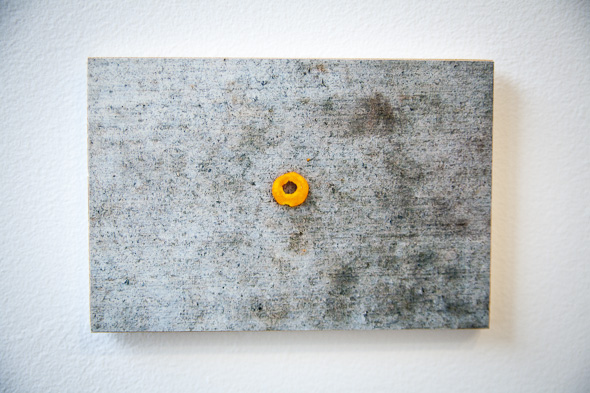 When they aren't curating shows (their current exhibit, The Space Between Here and There features the geometric shapes and found material of international artist in residence Jemma Egan), the collective is busy in their studios. With practices split between photography, visual art, sculpture, electronic music and woodworking (the gallery is also equipped with a full woodshop), viewing VSVSVS is like entering a funhouse. 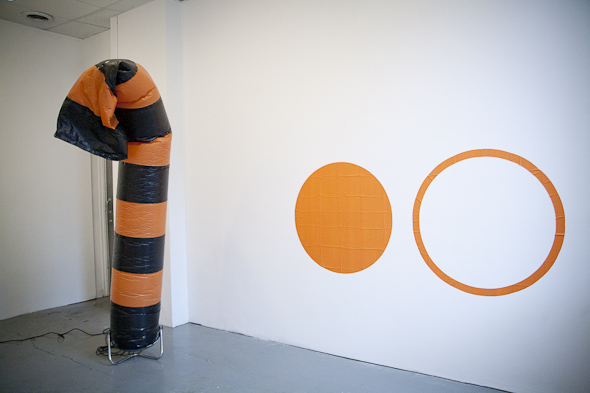 When VSVSVS take me on a tour, Wallis Cheung shows me the crystals she is growing from scratch for her delicate sculptures, Lora Kreviazuk presents her dramatic oil paintings reminiscent of a greyscale Kandinsky, and James Gardner points out their cat sleeping in a crate full of balloons - his medium of choice. Despite admitting that they are all "too old to be living in a warehouse," (their ages range from 24 to 28), VSVSVS call each other family. I cannot imagine how seven people get along this well and still manage to share one shower. 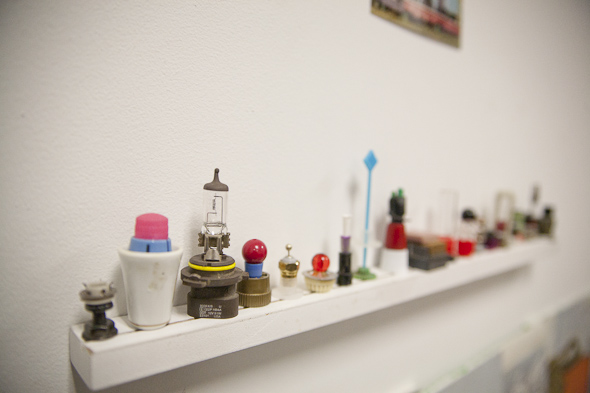 Another twist is that VSVSVS is possibly in the most remote location any aspiring artistic collective could be situated. At 25 Polson Street it's steps away from Polson Pier (a.k.a. The Docks concert venue) in the isolated Port Lands Area. All seven members bike to their part time jobs across the city throughout the year, but admit that the harsh winter winds that whip across Lake Ontario puts a damper on their spirits. 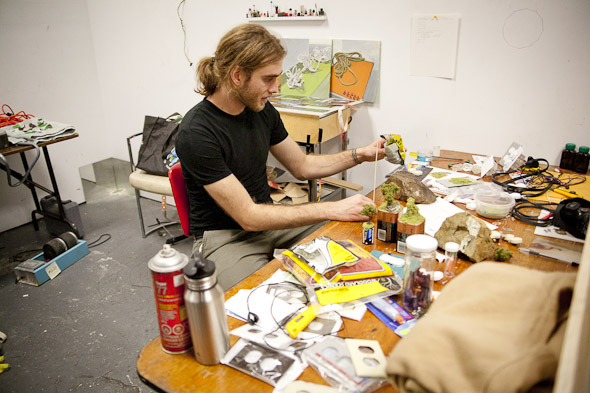 "This winter is going to be just as hard," admits James Gardner. "But I'm a strong supporter because it isolates us a little bit more. I probably don't go out as much, so I spend more time in the studio getting shit done. And that's what we all came here to do." 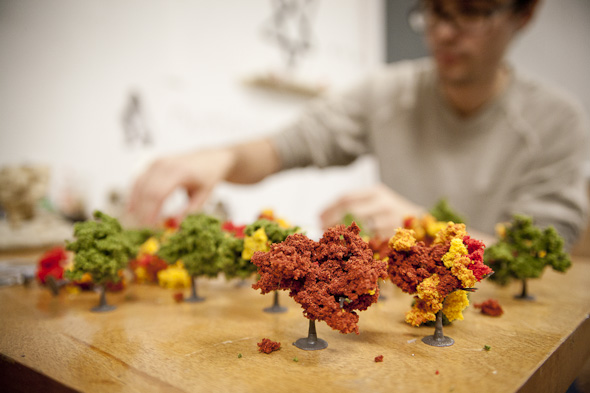 It's naturally tough organizing an opening that's a $30 cab ride away, so VSVSVS intentionally plan events that are epic by design. They've hosted dance parties that last all night so people can crash on their couches. And now they are teaming up with other upstart galleries like Toronto's Whippersnapper and Kensington collective The White House to spurn each other on. This combative yet collaborative mentality is echoed in their name. 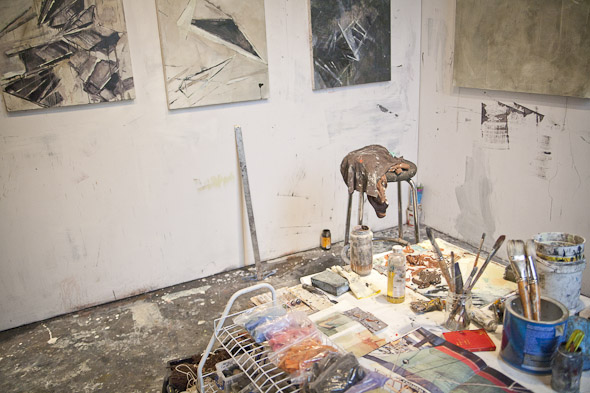 "The reason we're called VSVSVS is the idea that everyone in the art world is working together, and against each other," says Miles Stemp. "Everyone's supporting everyone else and they're all kind of fighting against everyone else at the same time."

But now that they've obtained the Toronto gallery of their dreams, do they members of VSVSVS feel less like outsiders?

Quips Miles, "We're in Toronto now, but we still live in the boonies. We don't have recycling, we have DSL internet but we couldn't get cable. " 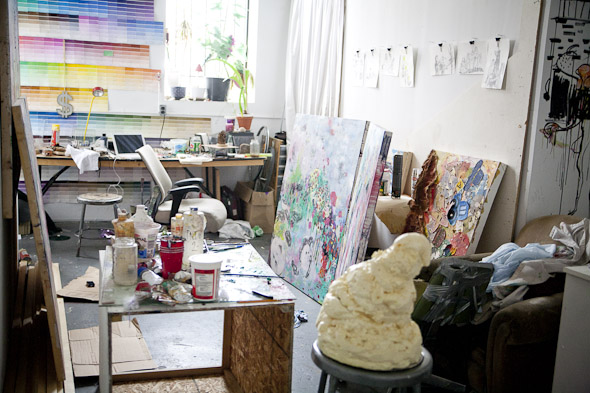 Members James Gardner and Stephen McLeod are a little more romantic about their location.

"When you hang out here when there's a snowstorm in the city, it's like the city completely disappears," says James.

Concludes Stephen, "We get the most beautiful sunsets." 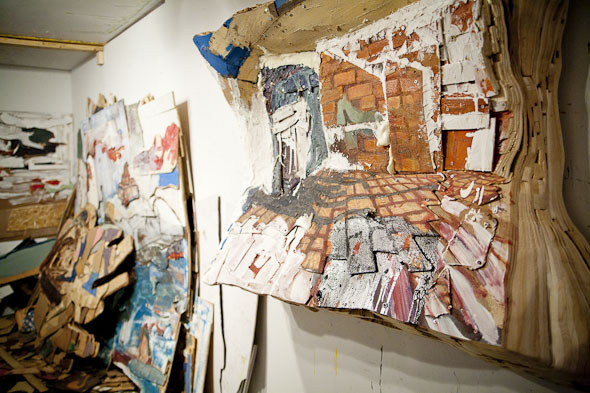 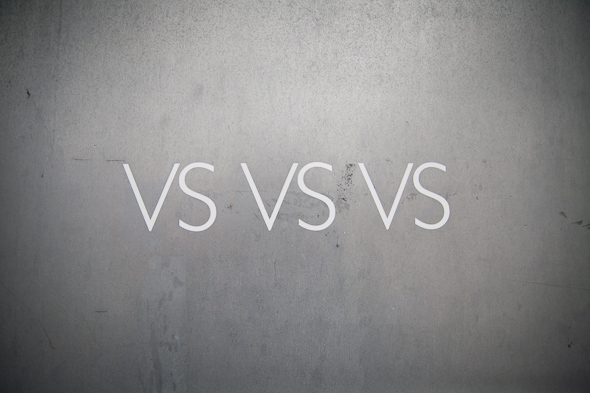 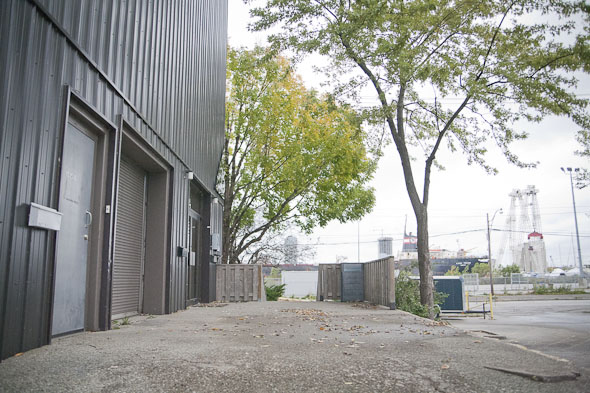