Labspace Studio is tucked into a quiet block of Pape in view of the big film studios on Eastern, but also just around the corner from bustling Leslieville . And with great ideas and ambitious plans, they're certainly no shrinking violet.

Operating as a project space/community gathering spot/rehearsal room/creative agency -- or, as they call themselves, a "creative agency and art house," Labspace's way of working can sound confusing. But as I sat with directors Laura Mendes and John Loerchner, on knitted afghans laid over sod, under a black web dotted with light bulbs, it all made perfect sense.

The place we sat was an installation titled "a hydro picnic under the stars somewhere in suburbia", part of a recent group show. All the work on display -- sculptures, photographs, installations, audio projects -- was the result of collaborations between participants in the recent Hydro Hike, part of Labspace's East End Expeditions Series. I quickly learned that collaboration and discovery are what Labspace holds most dear. 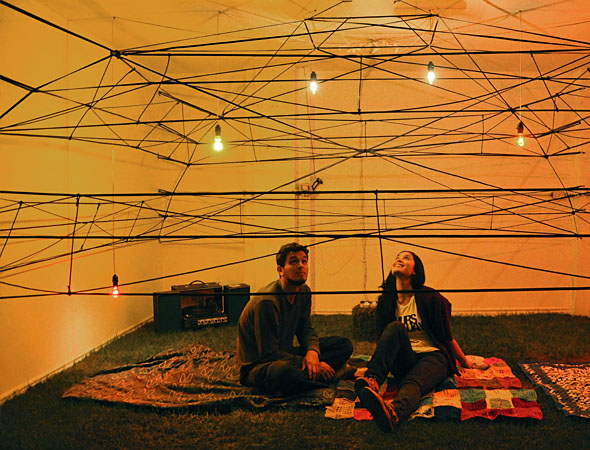 Each project is initiated with a theme, and then a group of artists make works in response, helping each other along the way. Then all the pieces are exhibited in the space, along with documentation of the journey and process. It's important to note that the participants aren't always "artists" in the traditional sense. Labspace strives to maintain a culture of inclusiveness, participation, accessibility, and experimentation. "We're not into elitist art," says John. "The process of making things is more relevant."

The artwork that was arranged around the airy space reflected this philosophy. Most of the pieces were connected to their maker's experience of being on the expedition: observations carried into larger imaginative ideas, diary-style photographs, and small personal reflection statements hung on the wall. Although at first glance, some the work seems to lack conceptual rigor, it's evident that purism isn't the point; similarly, the fresh perspective of a more organic/less academic art practice, is not short on creativity.

The community focus has been paying off -- Labspace is regularly rented out for rehearsals, performances, and gatherings of people in the neighbourhood, which is how they cover operating costs. Explaining this further, Laura tells me Labspace doesn't work within the grant system. "It's great to get a grant, but then what?" she says. "Grants are not a sustainable way to operate our business." 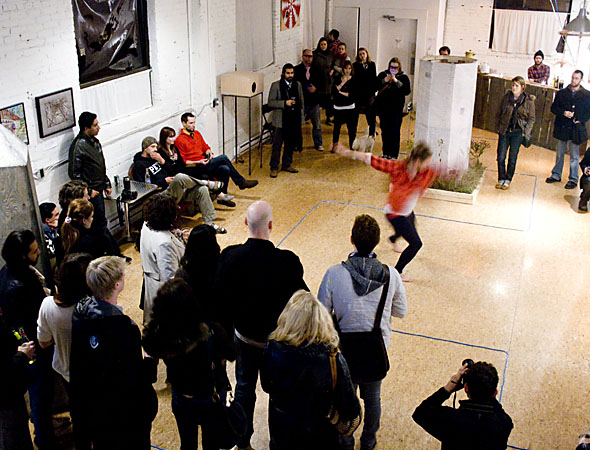 They've been operating successfully under these parameters for four years, having first set up shop on Carlaw. They moved to 2A Pape Avenue two and a half years ago, needing more space. And much more recently, the Labspace team has shifted gears, pooling their skills to launch themselves as a creative ad agency. Using experiences from their day jobs (John as an ad agency art director, Laura as a freelance writer and arts administrator), and from their artistic practices, they create promotional projects that blur the line between art and marketing.

As John explains, "The art projects are our playground. And sometimes we discover systems or visual ideas that have other applications. When we use some of those ideas in client projects, it allows us to funnel the proceeds back into new art projects. The new business model is an opportunity for us to combine our "day jobs" into our art practice." However, they both emphasize that they're selective about their clients, working only with businesses they believe in, and whose practices are socially responsible.

The projects undertaken by Labspace often have a strong ecological bent, an exploratory mission, or a sincere engagement with Toronto's mix of urban space and parklands. I noticed this continuing thread, and wondered if it had anything to do with the recent fashion of everything-eco; of course, this wasn't the case. These issues and themes genuinely captivate the team, and it shows in the works that they produce and facilitate. 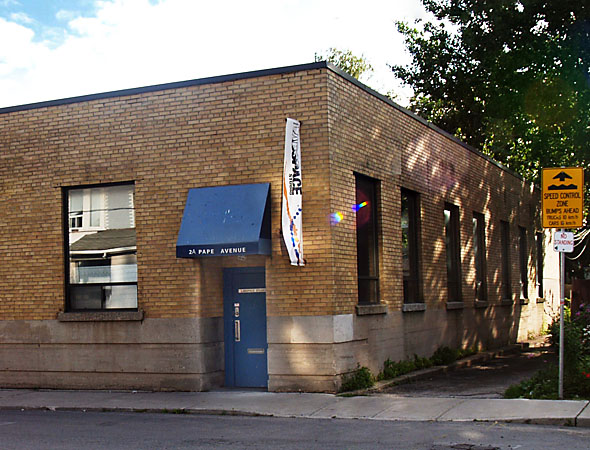 Meanwhile, the space and the community reap the benefits of Labspace's innovative business model -- their art projects connect people and encourage them be part of a creative space. Recognizing that they don't fit the concept of a mainstream art gallery, Laura admits there are challenges. "It's been hard to get the west end kids out here, because they don't always get what we're doing." In all honesty, neither did this west-end kid-- until I visited. There is energy in the space that's difficult to convey; it's welcoming and engaging. I became excited to find out more about upcoming projects.

So has it been worth it for Labspace to head off the beaten path? "The variety of different people coming through here and participating makes me feel like we're succeeding," says Laura. Adds John, "As long as we're making people feel like they're part of something -- that's the biggest goal."