The Weeknd opens a pop-up shop in Toronto

Pop-up shops are the latest trend from musical superstars with artists like Kanye, Justin Bieber, and Drake all getting in on the fun. The latest comes from Scarborough's own The Weeknd (a.k.a. AbÄl Makkonen Tesfaye), breakout pop artist behind "Can't Feel My Face" and a local golden boy.

The pop-up is located in the same spot at the foot of Ossington where Kanye West's took place in the summer of 2016, though the lines didn't quite stretch to Argyle for this one. In true Canadian style, fans line up patiently in hats and coats, awaiting their chance to purchase the several scant racks of what's essentially concert merch without the concert. 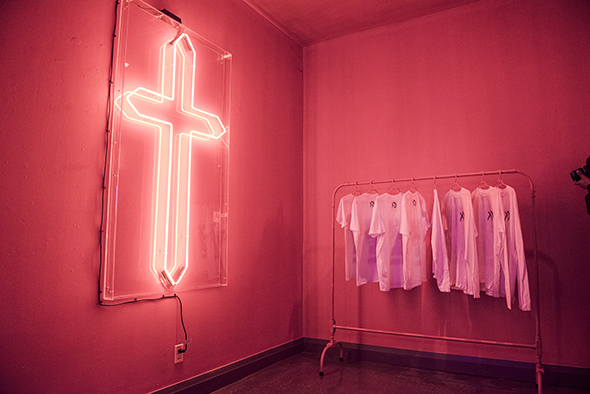 Upon entering the space, you're transported to an alternate underground nighttime reality that fits well with the often trippy visuals (like explosions on quiet streets) that The Weeknd uses in his music videos. Everything is bathed in a weird nightclub-like red light that feels sexy and risque as it highlights the red logos of crosses and lightning bolts that adorn much of the apparel. 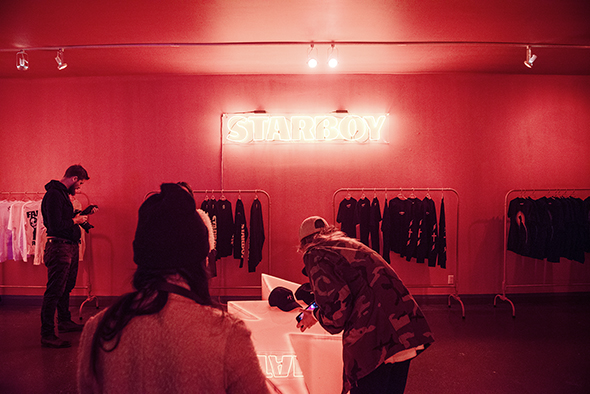 The light comes from neon signs reading THE WEEKND and STARBOY, the name of his third studio album which this pop up promotes. A giant illuminated lightning bolt serves as a display table in the middle of the bare space. 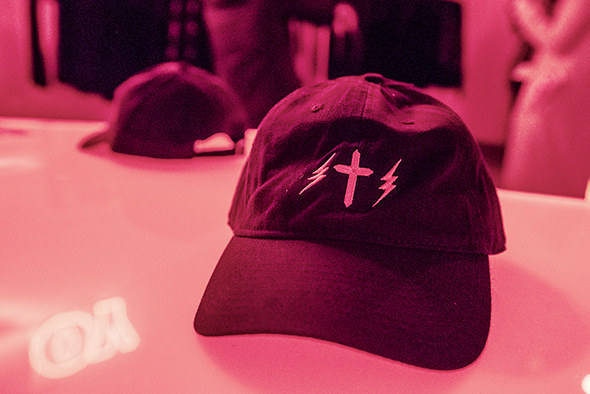 Perched atop it are baseball caps ($55) with two options for designs. There's a triad of a red cross sandwiched between two red lightning bolts, vague enough to look cool whether anyone knows you're a Weeknd fan or not. 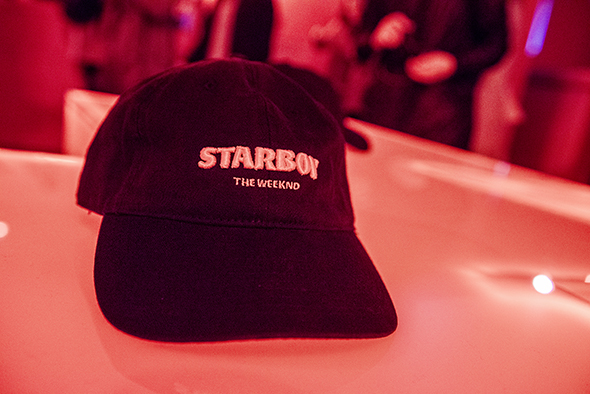 A more standard design reads "STARBOY" in white embroidery, under which the Weeknd's name is printed in smaller letters. 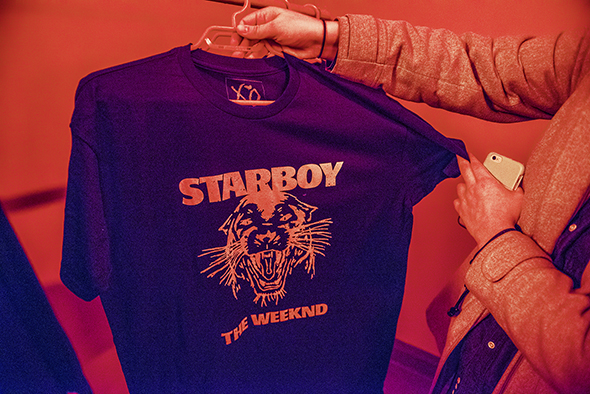 Other than that, it's the standard merch offerings dialed up to 11. Tees go for $45 and bear similar designs to the caps, one with the red triad of crosses and bolts and one with Starboy written in white on black, but with the addition of a cool panther. Jungle cats, lightning, crosses, skulls, images of The Weeknd himself and his own record label XO tie everything together thematically. 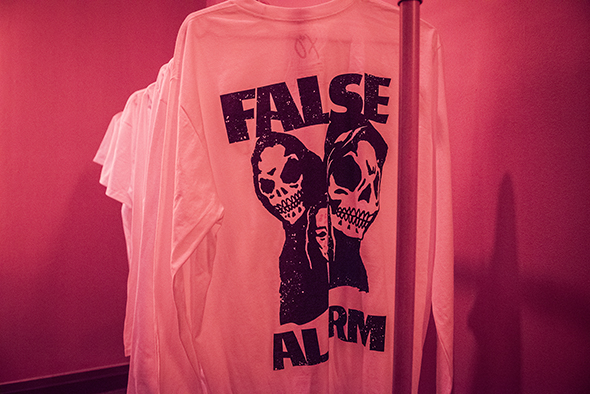 Long sleeve tees ($55) bear the crosses and bolts down the arms. Another has the word "Starboy" written down the arms and features an image of The Weeknd as he appears on the Starboy album cover. Yet another is more similar to a white short sleeve tee, emblazoned with the words "FALSE ALARM," the name of a single, surrounded by cool, creepy figures. 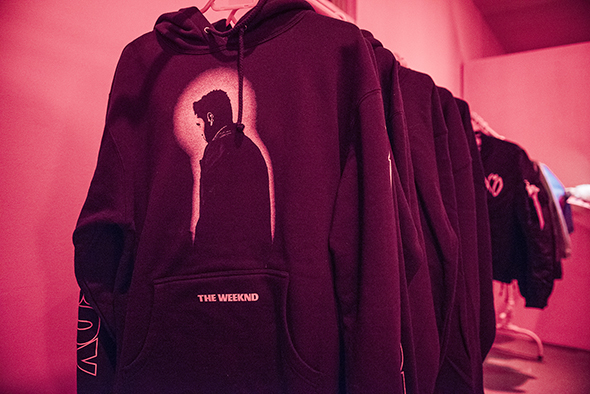 There's also a couple of tees and a hoodie ($115) that are specially made for Toronto, with our city's name in red alongside a silhouette of The Weeknd with his back turned broodingly. 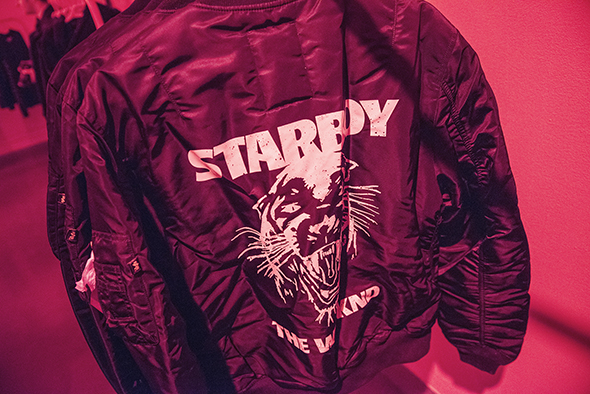 Jackets are the splurge item here. A bomber jacket ($260) has the Starboy/panther combo on the back and the XO logo on the breast. 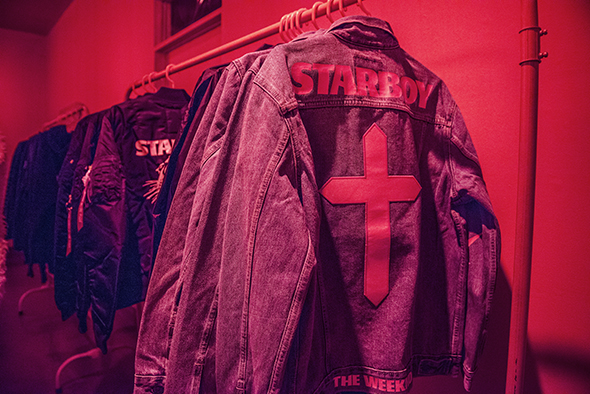 The most expensive item on offer is a denim jacket ($340) with lightning bolts on the sleeves and a red cross along with the word "Starboy" on the back. 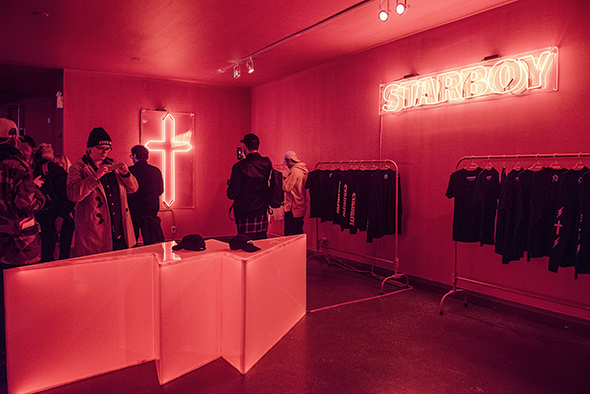 Fervent Weeknd fans lined up on Wednesday to get the opportunity to snag their place at a Weeknd autograph signing Thursday night. If you missed your chance to meet The Weeknd in person, at least you can still check out this sweet pop up until Sunday, November 27 at 3 p.m. 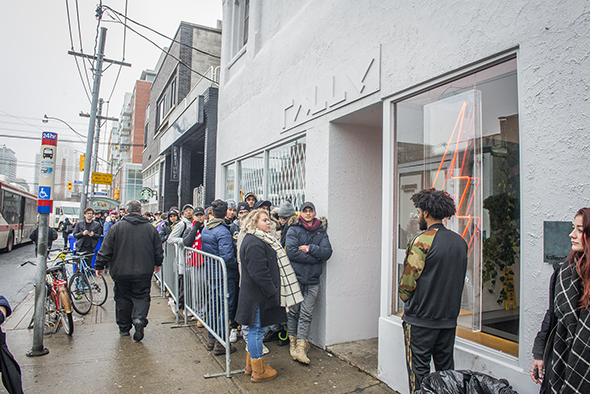 Toronto shoe store shut down after owing $38k in rent

This Toronto florist is selling weed bouquets for Valentine's Day