The top 25 hair salons in Toronto by neighbourhood

The top hair salons in Toronto will get your hair right, with expert hairdressers who've made a name for themselves after years of styling experience. Make sure to get the do for you: hair grows back, but the wait time between ugly hair cuts can seem like forever.

Here are my picks for the top hair salons in Toronto by neighbourhood.

This spacious location of Parlour is from Tyler Moore, formerly of Coupe Bizarre. There's also a location on Ossington, both offering eco-friendly products and gender neutral pricing.

The storefront of its eponymous hair styling veteran, Trevor Odho Studio’s simple interior houses one of the most consistent stylists in the industry. If an experienced hair cutter is what you’re looking for, this salon is where you want to go.

Cowlick is a salon but that does killer dye jobs in a small but cozy space. It's also the place to go if you’re looking for adventurous buzz cuts and shaved sides with bobs.

Keep it classy at the elegant Holdengrace: just across from High Park, this sleek salon is where to get your hair and nails done while sipping on a foamy cappuccino. 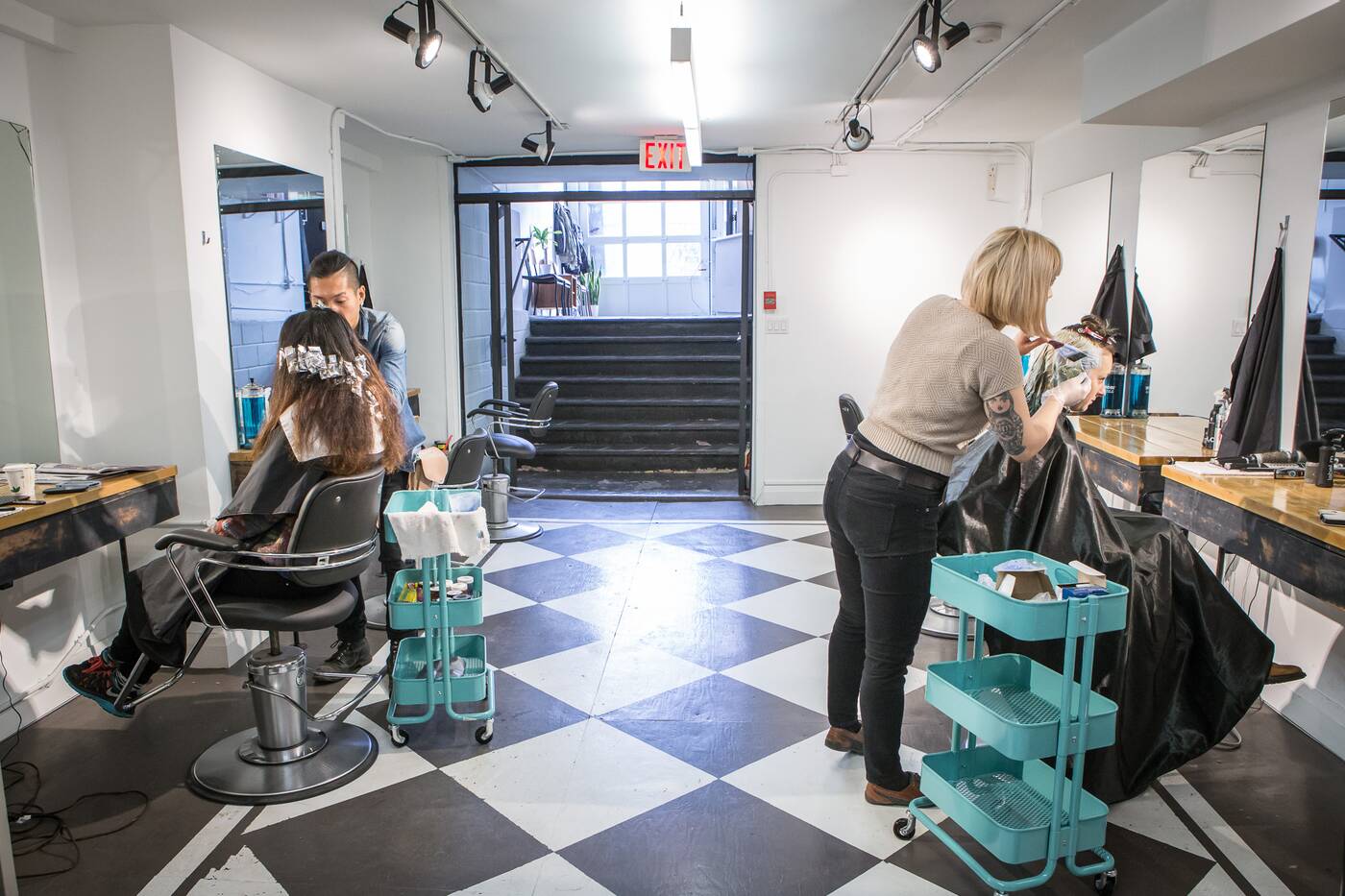 Good Day in Kensington provides cuts and dyes that are always on-trend. Photo by Jesse Milns.

With a little patio behind the shop, Salon Soap is the epitome of laid back cool. Expect a chill haircut from this boutique salon that wins extra points for being dog friendly.

With a 20-plus year following, celebrity stylist Billy Angst’s Angst Salon feels oddly placed in Corktown, but expect nothing but simplicity: no products for sale here, just straight up professional cuts.

Named after two popular hair styles, Bob + Paige has been a highly popular spot for years. White brick and vintage decor make this rustic spot a cozy place to get any kind of cut you’re looking for.

McManus and Campbell dominates this area as the only salon in the vicinity. Co-Owner Sharon McManus has dyed hair for movie sets like Chicago and both she and Anelise Campbell are former employees of the late and great John Steinberg.

Lebel & Crowe originally opened up on Queen but moved after finding some prime real estate in an area already flush with salons. Get a cut while admiring the abundance of vased flowers in this sunny space.

It’s all about fashion at Brennen Demelo Studio, an always buzzing studio on Adelaide. Expect your stylist to know the trends that are all the rage right now and to treat your hair like it’s the next in-vogue accessory.

Trying something adventurous? Experiment at Palm Sunday, a quirky shop which specializes in experimental cuts and dye jobs, plus some hilarious votive candles with unexpected celebrities’ faces for sale. 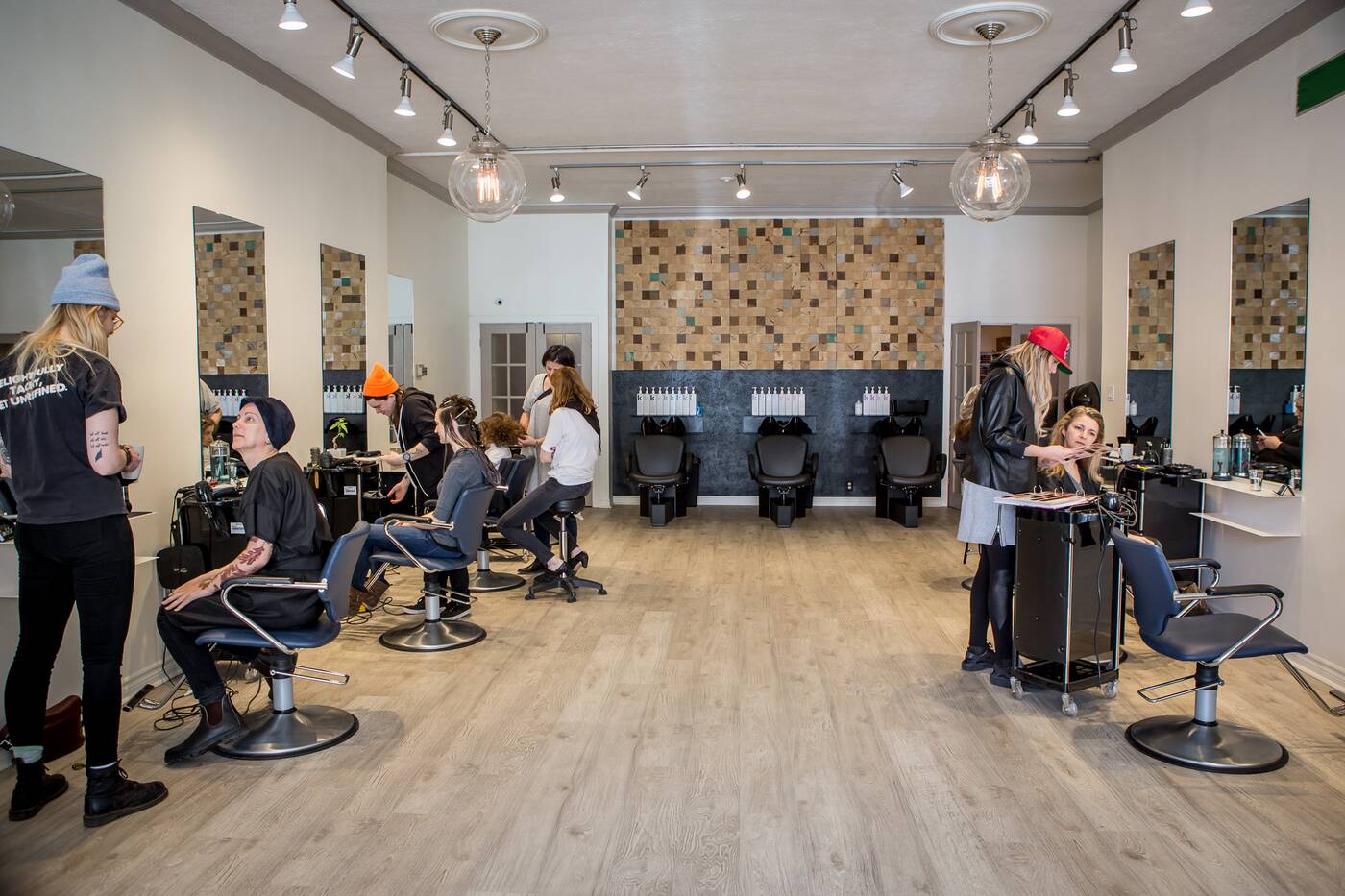 Lone & Co has a roster of unique hairstylists to execute any style you're looking for. Photo by Jesse Milns.

The Barber’s Daughter has a full list of services, from full and partial highlights to blowdrys and formal set and styles. Head over if you’ve got a high maintenance head of hair.

It's small but Hive and Hawk is great for professional cuts and a space that can usually accommodate walk-ins, despite only having a few chairs in the salon.

Untitled, the more mature version of its now shuttered counterpart Flaunt Boutique, is a salon that stocks hair products and offers espressos to keep you from getting too sleepy in the stylist’s chair.

Descend down a small flight of steps into the checkered interior of Good Day and emerge with something on trend and stylish. For exciting dye jobs and fun cuts for pretty affordable prices, this salon is the move.

Just a hop and skip from St. Lawrence Market, Navigate Salon’s interior of exposed ducts and concrete floors has been a reliable favourite for years.

Both a hair salon and a photo studio at the same time, Studio Fontana is a modern space that houses exceptionally skilled professionals who will get your hair photoshoot ready.

Seat yourself on one of the vintage theatre seats at Lola Salon for a decently priced cut and a selection of Italian hair products that are cruelty-free, with the name of the farmer and farm from which its ingredients were sourced right on the label.

Formerly named Leesa Berry Haircutting after its owner, Klute Hair has made a name for itself in the neighbourhood. It's a laid back salon, charging by the time spent. 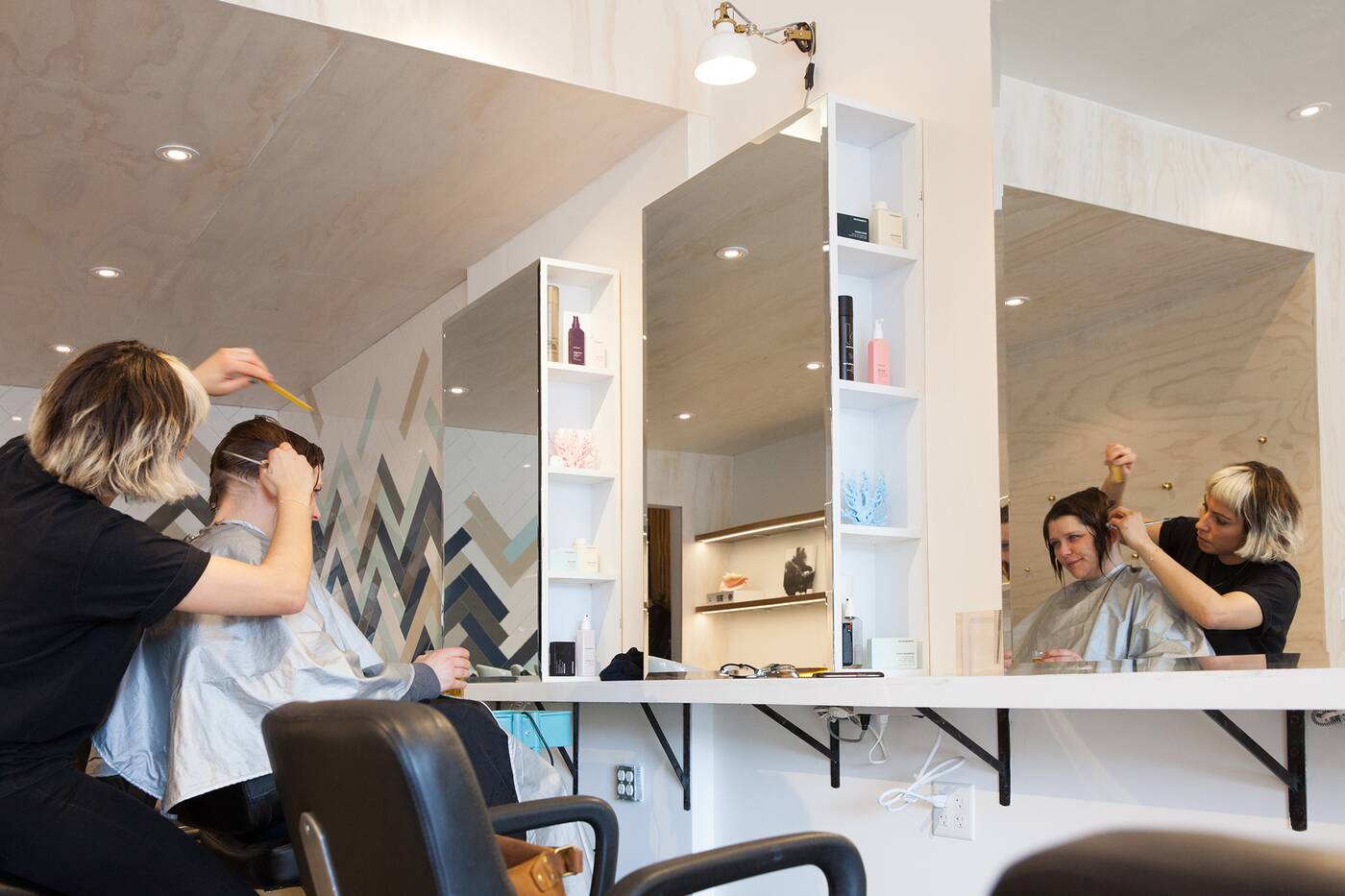 Palm Sunday does adventurous cuts and dye jobs for the experimental types. Photo by James Lee.

June Croken and her eponymous hair salon get booked months in advance – not a surprising wait time for someone described as a “hair architect”.

With a dream team of stylists, Lone & Co. nearly guarantees a cutter who will fulfill all your hairdressing needs. Gender pricing isn’t a thing here, and stylists pick their own rates, so pricing will vary.

Grateful Head has become synonymous with hair salons in the city. With another location on Dundas West, this brand is the archetype of an edgy, urban hair salon, skull decor and tatted hairdressers included.

Cuts at Modern Edge are really quite inexpensive compared to other salons, and they’ve become a popular spot for both men and women to get a fresh chop in a simple setting.

Civello is the luxurious, regal flagship of this haircutting brand. Cutting hair since 1989, Its three floors of Moroccan-themed decor consist of two cutting areas, a spa, a private salon and waxing rooms.

This neighbourhood is basically the hair salon mecca of Toronto, but Greg May has emerged as the upscale go-to where the famed hairdresser – best known for his textured bobs – charges a pretty penny for a go at your tresses.