L'Oreal Fashion Week's Day 4 was significantly warmer, and I'm not just talking about Thursday's spring-like weather. The second So You Think You Can Dance Canada's (and Mississauga native) Blake McGrath started somersaulting down the runway to Santogold's "Creator", temperatures rose inside the tent as Amsterdam-based urban brand Gsus Sindustries threw a 15-minute party, complete with Traci Melchor, golden bikes, a lot of skin and a good dose of models making out. 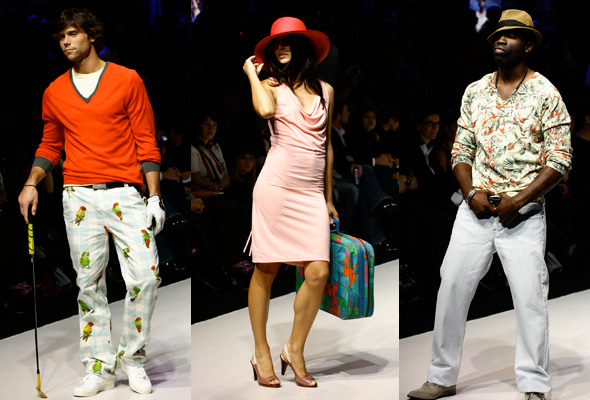 "We're bringing fun from Europe! It's fun from a brand that doesn't take themselves too seriously" exclaimed Jens and Ursula, the creative team behind the Dutch label. It was the first time the designers made an appearance at Toronto Fashion Week. "We're thrilled to be here," said Jens. "We really thought that Fashion Week here in Toronto was smaller, but we were shocked at how big this is. This show is really one of the proudest moments of our lives." 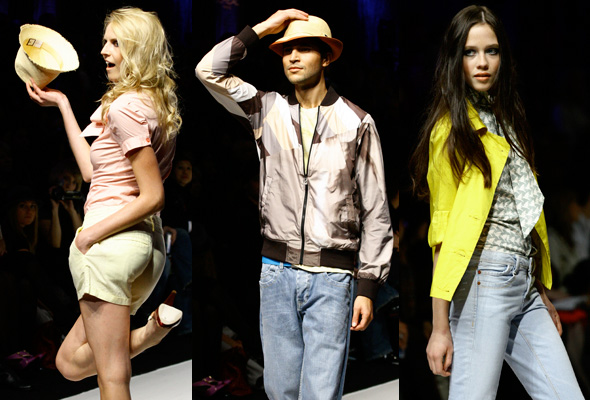 After last season's "African Bauhaus", Gsus Sindustries' Spring/Summer 2009 collection is taking to the tropical streets of Rio de Janeiro and the Mediterranean heat of St. Tropez. But instead of showing the glitz and glam these summer meccas are known for, the brand concentrated on the grit and color of Brazil's favelas and... trailer parks in the South of France? 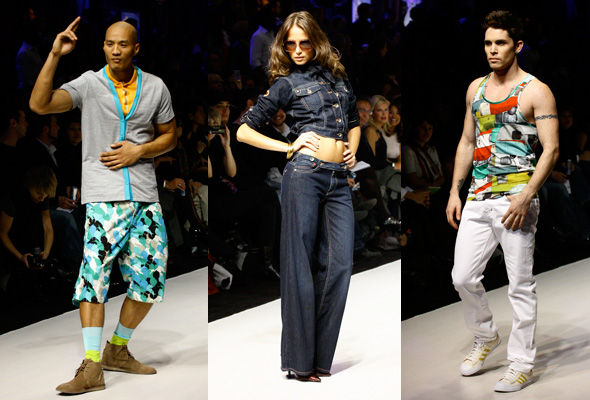 I paid a visit to the Gsus showroom in the heart of the Fashion District a few days before Fashion Week, where Everton McDougall gave me a preview of the pieces. Bright prints with parrots, favelas, trailer trucks and a random 1970s Brazilian matinee idol adorned the organic cotton dresses, hoodies, shirts and bottoms. The lighter denim washes were cut loosely for the women, and tighter for the men. Everton even pointed out that under the collar was the number for the real St. Tropez trailer park rentals. Handy if you're ever in the need of one while on vacation in the French Riviera. 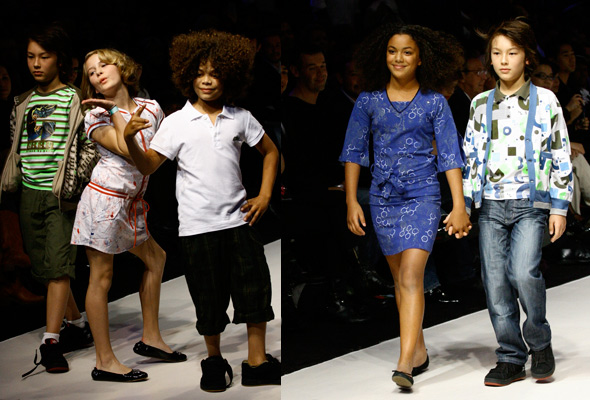 Everton told me that the concept was divided into four parts: the elegance of St. Tropez, getting ready for Carnaval, the frivolousness of Carnaval, and lastly the story of a family from the favelas of Rio winning the lottery and vacationing in the South of France. "The family runs short of funds and ends up staying in the trailer park," explained Ursula. 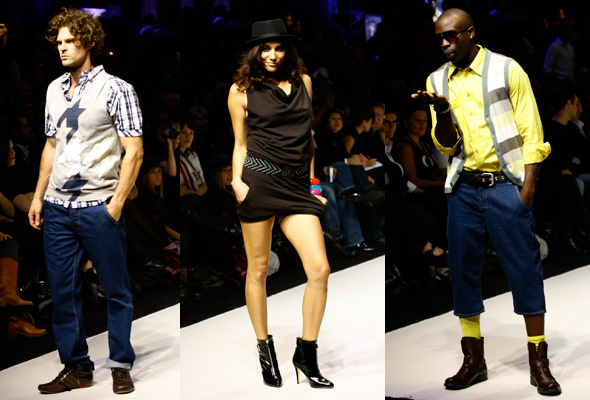 The pieces were very wearable yet still more individual then the stuff you'd find in the malls. I especially loved how soft the tees and the jeans were. All their products are made from recycled cotton, but the brand doesn't want to ride on the "green" hype so many do nowadays. "We've always, and will always, use organic cotton in our collections, but we're not going to mention it in any of our campaigns," said Jens. "We won't claim we're doing the best for the environment as we're still manufacturers, but the use of sustainable materials is important to us. We want the people to focus on our designs and not just because we claim to be 'green'." 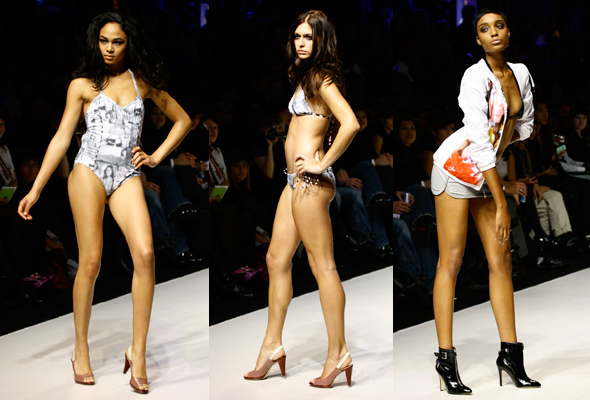 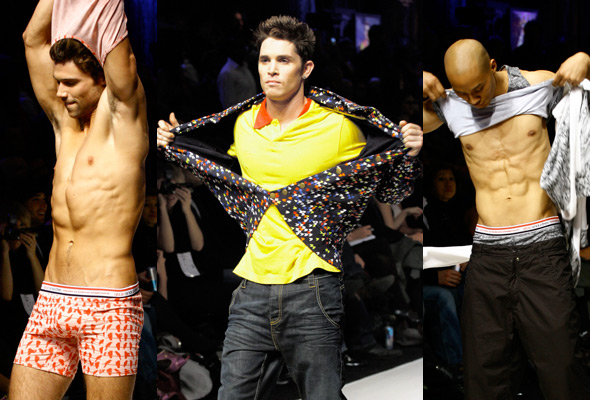 Aside from a cast of multiethnic models (which was refreshing!), the show also featured Canadian celebrities Blake McGrath and TV host Traci Melchor. Both have been sponsored by Gsus Sindustries for a few years now. "I wear Gsus on almost all my TV appearances," the SYTYCDC judge told me backstage. 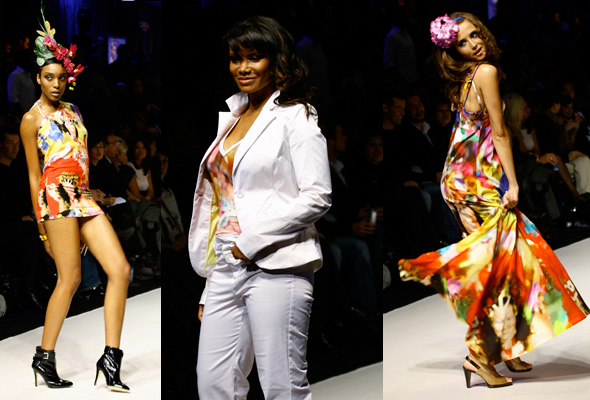 As for Traci, she likes how comfortable their denims feel. "Charlotte (Jenkins, of Gsus Canada) asked me if I wanted to be a guest model so I jumped at the chance since I love their clothes anyway. It was my first professional modeling gig and I even hired a runway coach!" Traci laughs. "It's addicting... I'd love to do it again!" 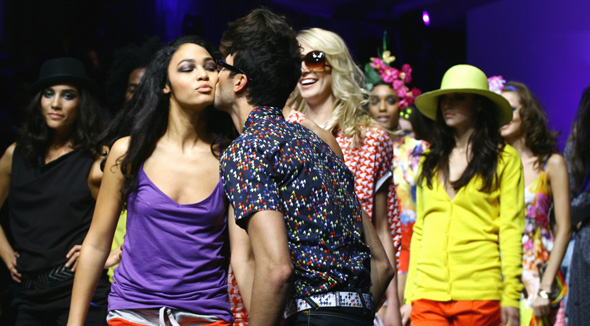 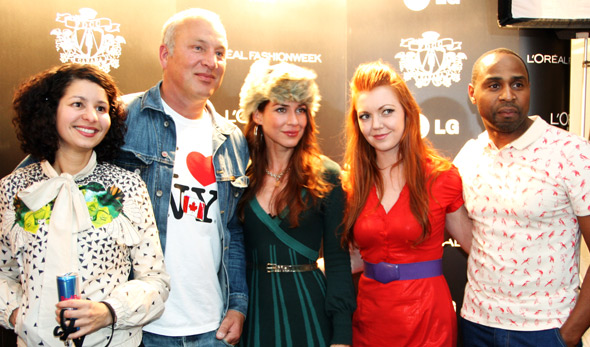