The history of Ed's Warehouse restaurant in Toronto

In decades past, one of the most famous restaurants in Toronto was Ed's Warehouse. Located at 266 King Street West, it was not only a place to enjoy a meal, but also a tourist attraction. For almost four decades, people visited it and invariably, it lived up to its reputation.

In the early 1960s, King Street West between Peter Street and University Avenue was sadly neglected. Adding to the difficulties was the CP Rail Yards, located on the south side of the street, where the Roy Thomson Hall is located today. Transients riding the rails were often seen on this section of King Street.

Despite these considerations, Ed Mirvish purchased the Royal Alexandra Theatre in 1962 for $200,000. He was quoted as saying that the value of the land alone was worth more than the purchase price, which included the theatre.

After restoring the Royal Alexandra, Ed Mirvish faced the problem that there were no quality restaurants in the area. In 1963, he solved the difficulty by opening his own — Ed's Warehouse. 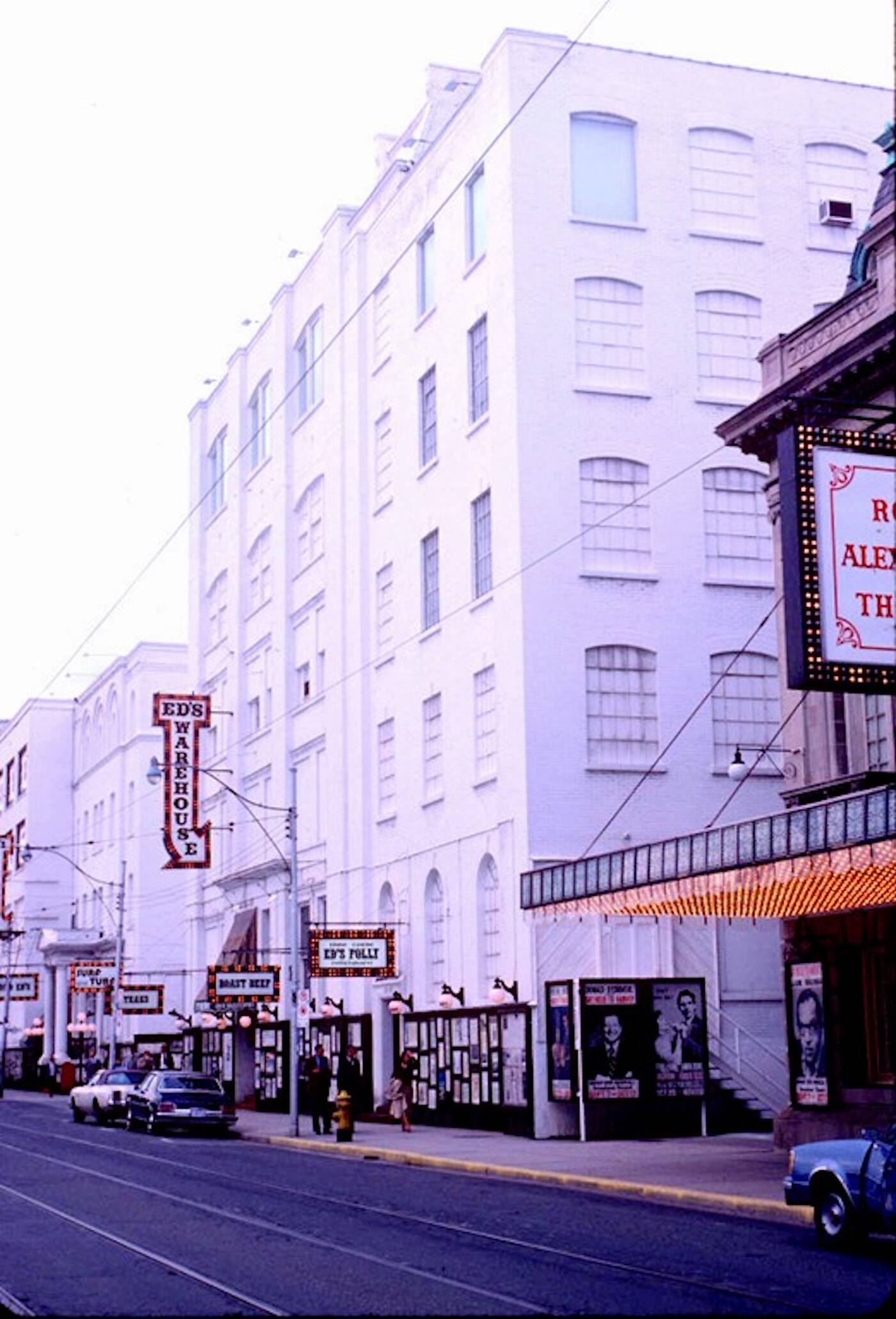 Its name was chosen as it was actually located in a former warehouse, immediately to the west side of the theatre. Ed believed that dining and theatre went together like the proverbial "horse and carriage," so the enterprise seemed appropriate.

Crowds attending the restaurant and the theatre brought life to the street. This was not true of other projects that opened in the area in the years ahead, such as the Roy Thomson Hall (1982), and the Canadian Broadcasting Centre (1992). These buildings basically ignored the street life.

Ed eventually opened more restaurants on King Street and also built the Princess of Wales Theatre. Finally, the Bell Lightbox was opened (2010), the jewel in the crown that made King Street the most important entertainment district in the city, and perhaps in all of Canada.

However, it all started with The Royal Alexandra Theatre and Ed's Warehouse Restaurant.

In its day, dining at Ed's restaurant was an experience unequalled in Toronto. Rita Zakes of the Toronto Star wrote in July 2007 that its ambiance was like that of a Barnum and Bailey circus. Personally, I considered it "antiques, junk and Victoriana gone wild!"

Along with the red-flocked wallpaper, there were huge Oriental vases, Tiffany lamps, bronze and marble statuary, an automobile, antique photographs, photos of numerous theatre stars, stained glass windows, and lamps with naked ladies on their bases.

From the moment the restaurant opened, the decor became part of the attraction. Best of all, after dining in this delightfully garish atmosphere, the Royal Alexandra Theatre was only a few steps away.

Critics jokingly stated that the menu was so easy to prepare that Ed had fired his chef and gave the job to the parking attendant. The critics had obviously never attempted to cook prime rib.

The restaurant was so successful that Ed Mirvish expanded and opened Ed's Seafood, Ed's Chinese, Ed's Italian and Ed's Folly (a lounge).

In Ed's Warehouse, men were required to wear a jacket and tie, this requirement maintained long after other dining establishments eliminated the tradition. However, Old Ed's restaurant offered lower prices and was more casual. 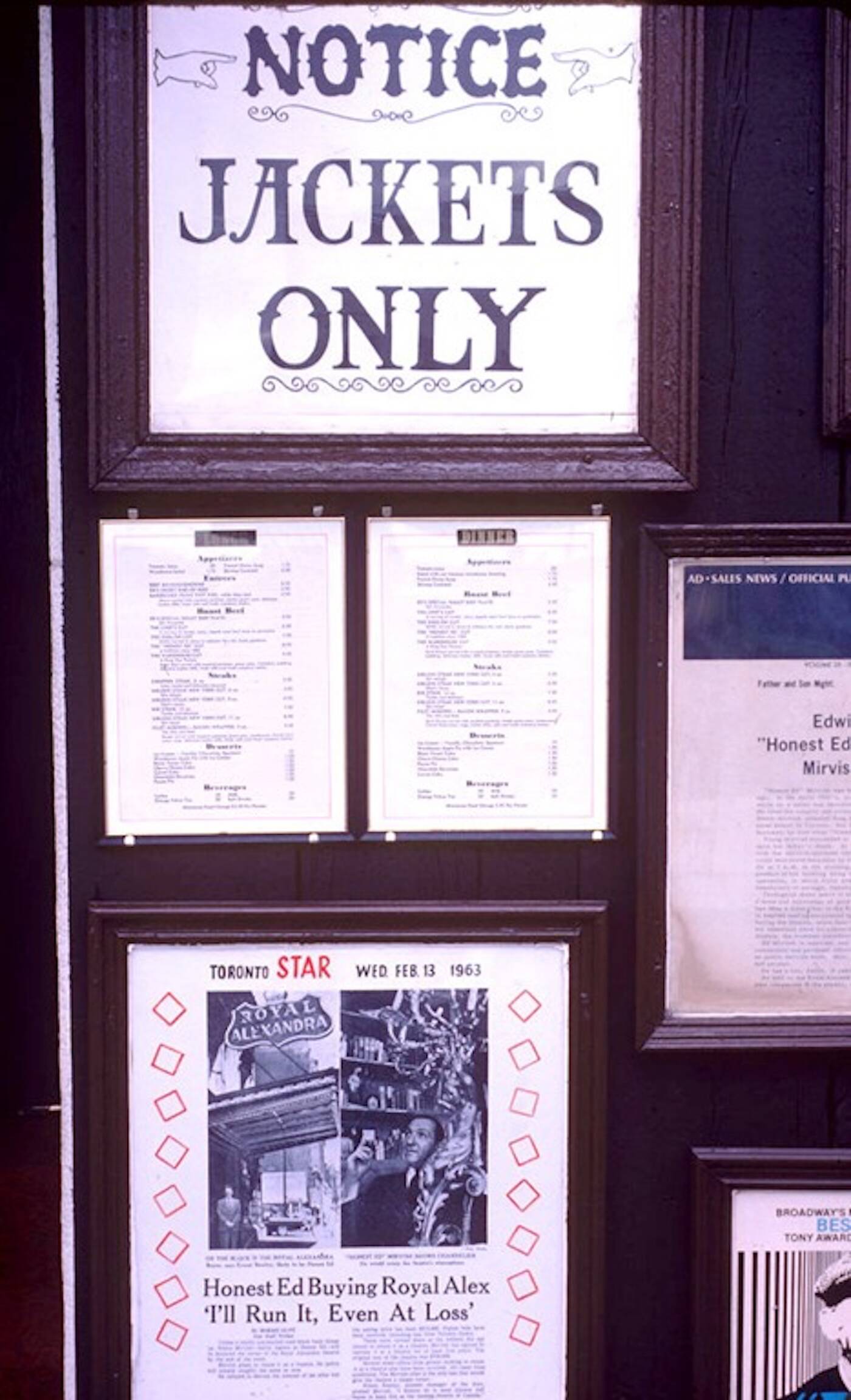 Sign outside Ed’s Warehouse on August 9, 1981, displaying the menu and notifying men of the dress code. Toronto Archives.

In 1971, I subscribed to the Mirvish theatre series. When my first tickets arrived in the mail, I received two complimentary coupons for Ed's Warehouse. If I remember correctly, each coupon had a value of $20, which covered the entire cost of the meal. These were indeed the "good old days."

In the 1970s, when the Mirvish restaurants were at their height of popularity, they had a combined capacity of 2,300 seats and often served 6,000 meals a day. In this same decade, Toronto Calendar Magazine, which later merged with Toronto Life, sponsored a contest to determine the best restaurant in the financial district.

Over 10,000 people voted, and out of the 21 restaurants listed, Ed's Warehouse was #1. Despite this accolade, I read online some very critical reviews of the food at Ed's Warehouse. However, I considered the beef, which was imported from Chicago, among the finest I have ever experienced.

One year on my birthday, my family told me that they were taking me out to dinner, but they kept their choice of restaurant a surprise. I inquired if I should wear a tie and jacket and was told that they were unnecessary.

When we arrived, we discovered that a tie and jacket were indeed mandatory, as it was Ed's Warehouse. The waiter offered to provide jackets and ties from among those that they kept for such situations. He explained that the dress code was necessary to prevent vagrants from across the street at the railroad yards from entering the establishment.

We were offended, as the clothes they offered were grubby looking, and we were certainly not hobos. We were wearing freshly-ironed sport shirts and neat trousers.

Then, Ed Mirvish appeared and inquired, "What’s the problem?"

He smiled, apologized, and told the waiter, "Escort them to the table that has been reserved."

We enjoyed the meal and when the cheque arrived, it had been reduced by 50 per cent. Ed was a very smart businessman as well as a big-hearted individual. My family never forgot his generosity.

Similar to all good times, the Mirvish restaurants finally disappeared. Ed cancelled his dining license in December 1999. When reporters asked him about the closings, he quipped that he was tired of doing dishes. The city was never the same. This was also the case when his discount store, "Honest Ed's," closed in December 2016.

To paraphrase Ed Mirvish, "Ed's Warehouse was one of a kind. Often imitated, but never duplicated."

Doug Taylor was a teacher, historian, author and artist who wrote extensively about Toronto history on tayloronhistory.com. This article first appeared on his site on November 15, 2016 and has been republished here with the permission of his estate. The article has been modified slightly.