A tour of the TIFF Bell Lightbox

In three days, Toronto's newest cultural attraction will officially open at King and John. So while the last exhibit pieces are being mounted and the bustling crew adds a few more finishing touches, TIFF invited media to visit its swanky new Bell Lightbox.

Keen to see more of the soon-to-be movie megahub, this time I went in without a hardhat and with blogTO photographer Dennis Marciniak. We didn't get the sponsors' deluxe champagne tour, but we did get tons of photos, plus a sneak peek at the inaugural Essential Cinema exhibit and post-TIFF 2010 programming. 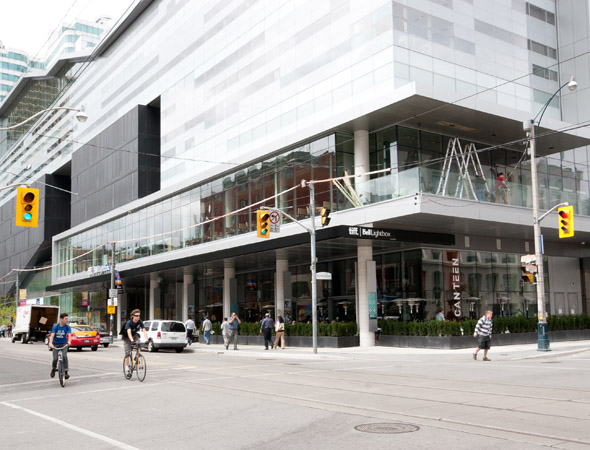 The official launch of the space will be during this year's TIFF, with a celebratory a ribbon cutting ceremony and bloc party from 11 am to 4 pm on Sunday, September 12, 2010. It's a free open house event, and if the crowds are manageable, an opportunity to check out the space and exhibits, with music, special guests, a movie star lookalike contest... and did I mention the cupcakes and ice cream? 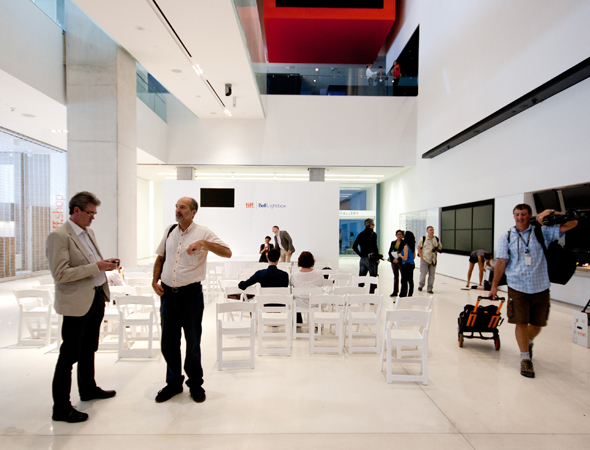 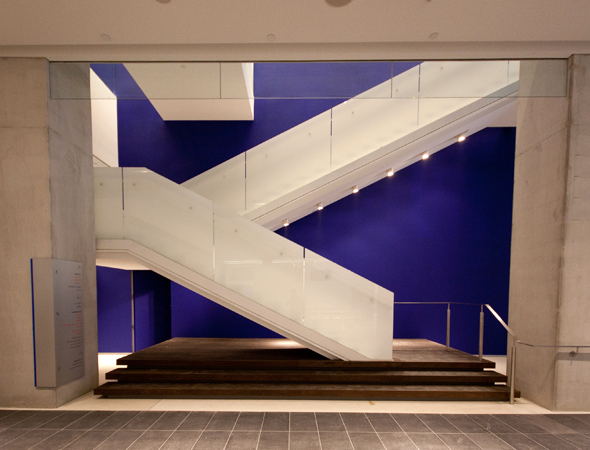 Like it or not, the building is designed (by architect Bruce Kuwabara) to showcase the art of cinema. Its tall, white, open space lobby offers a clear view of the main floor gallery, reception desk, restaurant, lounge, twin escalators with red linings (to mimic a red carpet), cinemas on the second floor, an enormous multistorey wall that will be used for projections, and an orange "master control" box where all of the building's screens are monitored. To put it simply, Noah Cowan, Artistic Director of the TIFF Bell Lightbox, has described the space as boxes within a box. 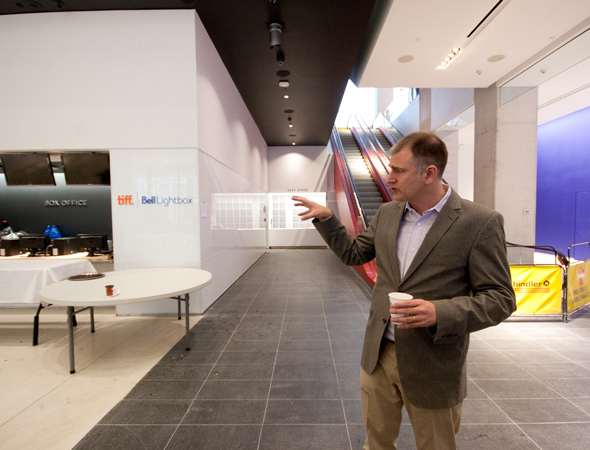 Cowan walked us to the main gallery space to check out what's on display at the first ever Lightbox exhibit, Essential Cinema. First, through a commissioned installation piece by Guy Maddin with projected fragments of lost films. 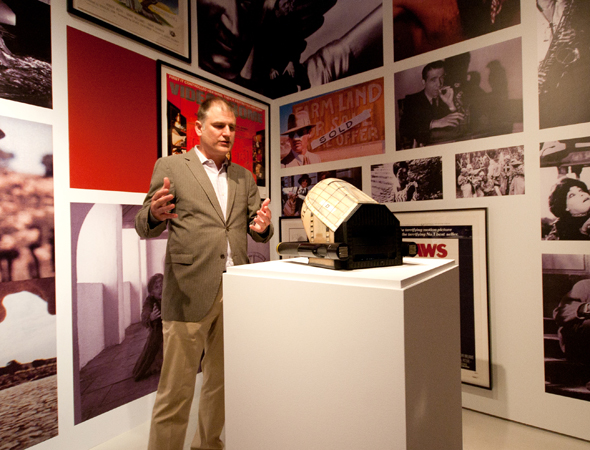 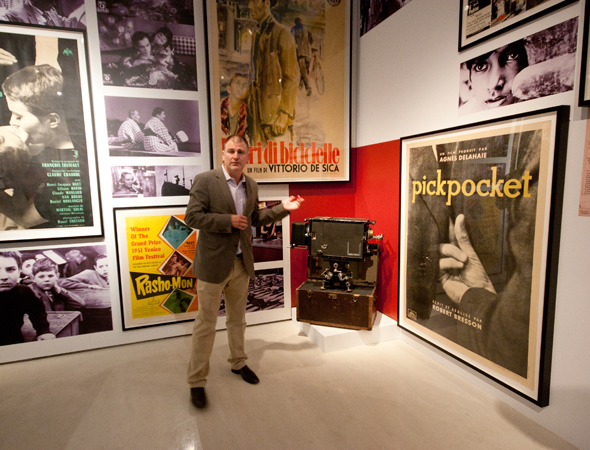 Next, a room covered in iconic movie posters from the TIFF Cinematheque's Essential 100 films list, covering the history of cinema. There, we find gems like a rare print of La passion de Jeanne d'Arc and Saul Bass' famous spiral designed piece for Vertigo, images from Wings of Desire, Citizen Kane, the French New Wave's greatest hits, and a few odds and ends like Robert De Niro's license from Taxi Driverand a 160 degrees lens used as HAL 9000's view in 2001: A Space Odyssey. Hopefully, TIFF will lend me some of this stuff to decorate at home. 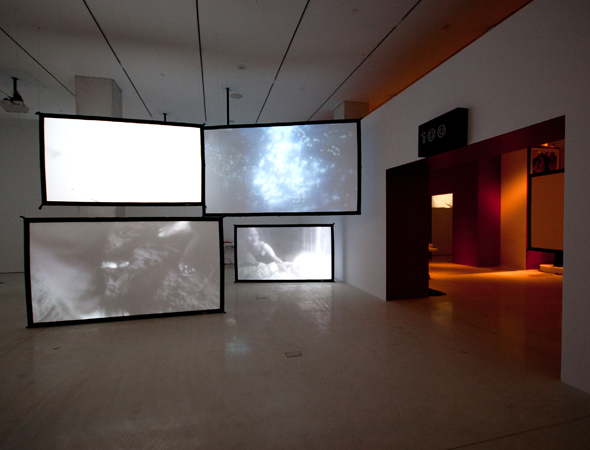 Upstairs, in the 150-seat Cinemas 4, Atom Egoyan's new installation piece, 8 ½ Screens, has just been installed. Egoyan takes a key scene from one of my favourite films, Fellini's 8 ½, spices it, and projects it onto 8 ½ carefully positioned screens. All this, plus Michael Snow, Douglas Gordon, and lots more, free and open to all from September 12th to the 19th, and September 23rd to October 23rd.

Sure, the galleries, museum café, lounge, restaurants, and reference library are great features, but the essential draw for cineasts like me is the TIFF Bell Lightbox movie theatres and year-round programming. 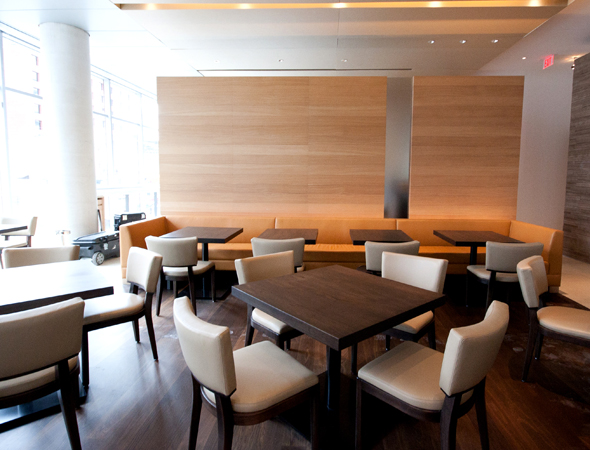 There are 5 public cinemas in all (and a concession stand!) We got to test the comfy seats and insulated sound space of Cinema 1 with an Essential 100 teaser montage. The largest at 530ish seats, Cinema 1 has 35mm, rare 70mm and state-of-the-art digital capabilities, plus a performance stage for musical guests and Q&As. In that couple of minutes of clip watching, it occurred to me that I'd be spending a lot of time here in the years to come. 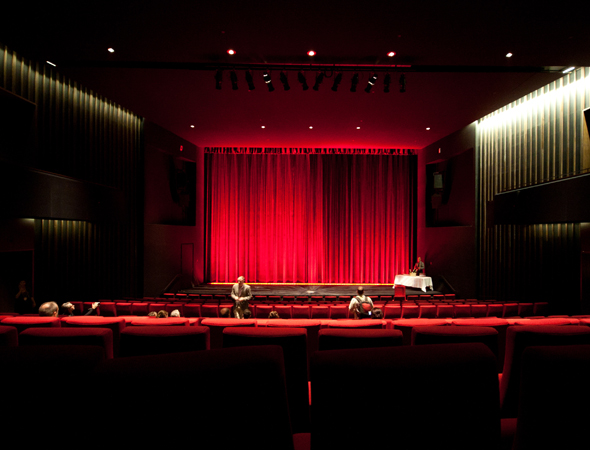 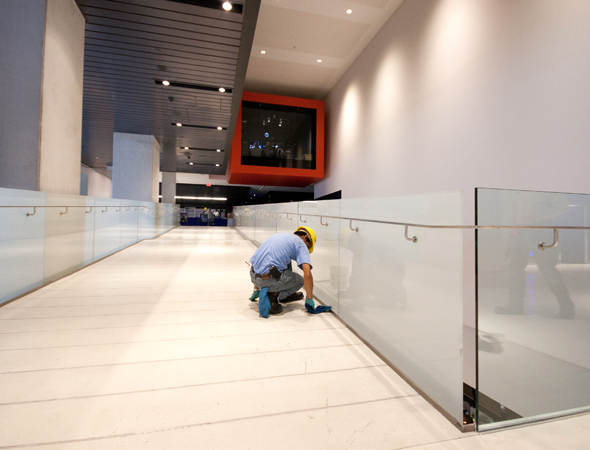 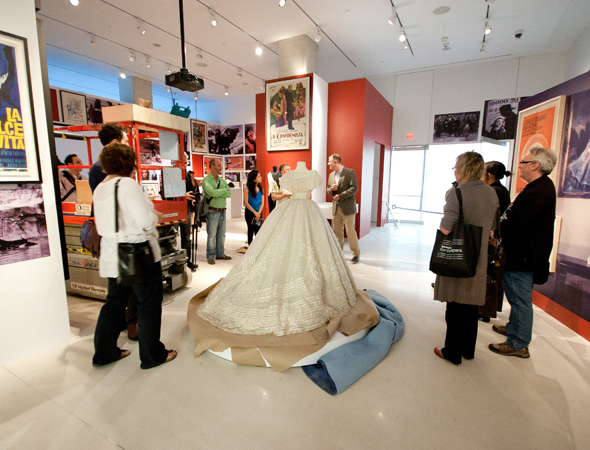 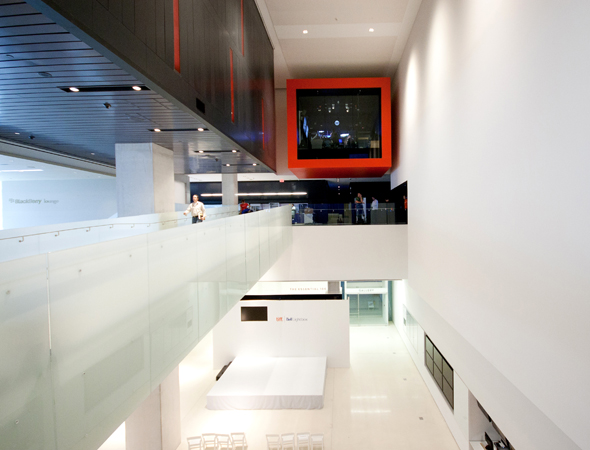