The top 10 pubs in the Beaches

The Beaches may not be known for a thriving bar, food or music scene, but what it does have in spades is pubs. The stretch of Queen St. East between Victoria Park and Coxwell is home to a large variety of watering holes that are well-loved by locals for their chicken wings, beer specials, people watching or spectacular view. They all have at least one thing in common, too, despite their differences: some of the friendliest staff in Toronto which is what you want at a neighbourhood spot designed for brewing your blood into beer.

If you like sports and beer and live in the Beaches, or even if you don't, here, in no particular order, is where you want to go when seeking out suds on the far east of Queen Street.

Captain Jack
Captain Jack is a true dive in the best way imaginable. The regulars call it 'the hole.' Those regulars include ex-pornstars, ex-athletes, Neil Young's brother, and other fantastical characters. The lovely woman behind the bar tells me, "We have nothing special. Just a few old man beers, like 50." She's totally wrong, though. First of all, 50 is awesome, and second, it's this bar's clientele that make it incredible. On a recent visit, one of the aforementioned 'old men' asks me to stay, but it somehow doesn't seem creepy. Later, he tells me I have nice feet, which is just about the creepiest thing another human has ever said to me, but is also kind of adorable. Pints can be had for $5, and that doesn't hurt either.

Castro's Lounge
Castro's is a dark little lounge at Queen St. East and Hammersmith known for its beer selection and vegetarian menu. It may be veggie-focused, but the menu still features traditional pub food, like quesadillas and veggie chili. There are healthier options, too, like vegan grain bowls. You'll find an ever-changing selection of unique craft brews on special, as well. The front window is a garage-door style setup, and they open it up to let in the sounds of the street in the summertime. There's loads of visual interest here, with a living gallery made up of old celebrity photos.

Fill Station
Fill Station is the place to go to grab all of the pub food classics on the cheap. They do a pound of wings for $6.99 on Mondays, a $4.99 nachos special on Thursdays, and bar snacks like jalapeno poppers and calamari for $5.99 every day of the week. It's a friendly spot where the servers know the customers by name. You'll also find a selection of $5 pints. There's entertainment, too, like sports on the big screen and Guitar Hero contests. I would caution against being a woman with a face in here during the week, though, unless you really like being aggressively hit on by much older dudes. In that case, fill your boots.

Gull and Firkin
I'm not sure where you'd find a Guinness and oyster special in the city other than at a Firkin, and the Gull is the Beaches' answer to that. The Gull and Firkin is a place to go if you'd identify as a fairly normal person looking for consistent food and service and British-inspired pub food like Shepherd's pie ($11) and poutine with a British twist. On weekdays, they do a happy hour from 4 p.m. until 7 p.m. featuring $4.50 domestic draught and house rails. This Firkin location has a patio with room for about 50 people, and they're also down with the sports. All of the sports.

Whitlock's Restaurant
Compared with some of the other spots on this list, Whitlock's is a bit more austere on the inside. It's the kind of place you might go to have a nice pleasurable cry into your bourbon after work. Located on Queen just east of Woodbine, this is also a place to frequent if you're a history nerd. The building is designated as a historical site, and it's been part of daily life in the beaches since 1891. It was a grocery store, and then a post office, and, in 1925, became the first Black Diamond Cheese Factory. It still has a dark factory feel to it, despite the modern furniture. Now, at Whitlock's, you'll find specials like all-you-can-eat brunch for $13.99, a burger deal complete with fries or salad for $10, several local brews on tap, and a full bar. 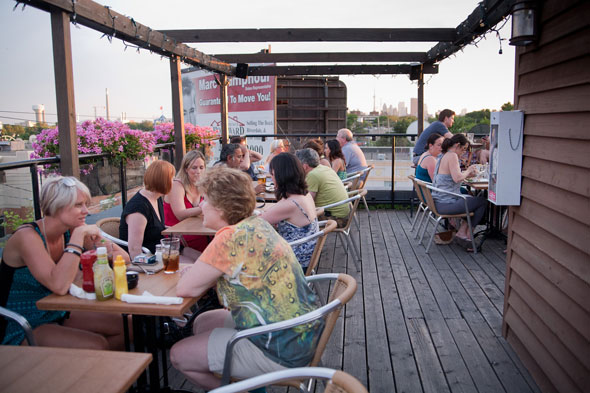 Murphy's Law
Murphy's Law boasts one of the best rooftop patios in Toronto. The views of the lake and of downtown are stunning, and the breeze is perfect on a summer day. Murphy's brands itself as an Irish pub, and while the feel isn't all that Irish, some of the Emerald-isle inspired dishes, like Irish stew and beer-battered fish, are also some of the most popular. Specials include half price apps on Mondays, and half price wings on Tuesdays. Drinks specials include Caesars for $2.99 with weekend brunch, and $4 and $5 beer specials throughout the week, with picks like Keith's and Rolling Rock.

Lion on the Beach
Lion on the Beach is another spot known for its extensive offerings in the patio department. There's room for about 175 people between the two patios, and patrons of those patios can enjoy what might be the cheapest hamburger special in the city (aside from McDonald's). You can order a burger and fries at Lion on the Beach for a mere $5.25. Drink specials stack up to this, too. Caesars can be had for $4 at brunch, and pints are $5 during Leafs games. The whole place feels kind of like a dignified Old English mancave, with dart boards and large TV screens.

Salty Dog
Salty Dog is known for being a neighbourhood gathering spot, too, but for a different set of folks than those who congregate at Captain Jack. I recently chatted with a server in her twenties here, and she says all of her friends from high school come here for reunions. Salty Dog is a classic sports bar. The servers wear baseball-inspired tees, there are big screen TVs on the walls, and patrons get together and conduct football pools. There's a loyal fanbase that comes out to catch hockey games, too. The whole place kind of feels like a sports theme park. Monday and Wednesday you'll find specials on wings, and, according to the staff, NHL personalities make a habit of hanging out here.

Outrigger Tap and Table
They should add the word oasis to the name of this pub. The patio makes you feel exactly like you're pool side on a vacation. There's no pool, per se, but there is shade and a glorious fountain. The food is tropics-inspired, too, with the menu offering dishes like tilapia with lobster ($16) and fish tacos ($12), one of their most popular dishes, which is served complete with avocado, cilantro and sour cream. For drinks, you'll find bellinis, margaritas and martinis, which are well-suited to the environment, as well as a limited beer selection including Steam Whistle, Keith's, Stella and Bud Light. And don't forget to check out the walls inside, tooâthey're brandished with some gorgeous paintings of Toronto.

Breakwall BBQ
Breakwall, of course, is known for its smoked meat. When I recently visited this spot (at 4:30 p.m. on a weekday), several utterly sloshed frat dudes have already become fixtures on the 35-person capacity patio. They tell me they can't resist the combination of smoked meat, beer and sports. Smoked specialties include ribs, beef and pulled pork. "It's fresh, too!" a cowboy hat-clad gentleman hollers at me. The tap includes picks from Rolling Rock, Keith's, and Budweiser, and two pitchers of Keith's can be had for $32. If beer is not your thing, Breakwall also has specials on frozen cocktails like margaritas and pina coladas.