Monday night at the Distillery District's Fermenting Cellar, put the best of Toronto's bartenders against each other in the Toronto final for Made With Love, the annual cocktail competition.

With a directive to create signature cocktails inspired by Toronto and some of its most popular neighbourhoods (Cabbagetown, Chinatown, College Street, High Park, and Liberty Village), bartenders were up for awards for both Public's Choice (from a throng of around 600 people), and that of the panel of judges. This year's panel included Kevin Brauch, of Food Network fame; Matt Jones, Ambassador for Maker's Mark Bourbon; Dave Mitton of The Harbord Room; and Priya Shah of Campari America.

16 bartenders had made it through the qualifying heat to Monday's final, with drinks showing off a wide range of styles and techniques. 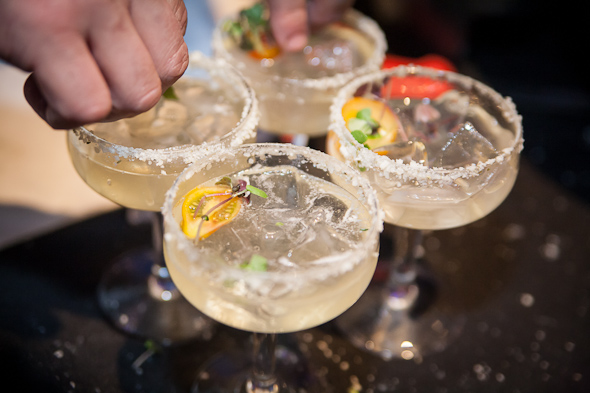 The strangest drink of the night was a tough call between Adrian Stein's (Mistura/Sopra) bizarre pizza-in-a-glass concept, and Simon Hooper's (Nyood) dual sorbet drink in an ice-cream cone. Both were ambitious, but after being left with a burnt tongue from the nitrogen-dipped latter concoction, I felt better served by drinks that didn't resemble food. 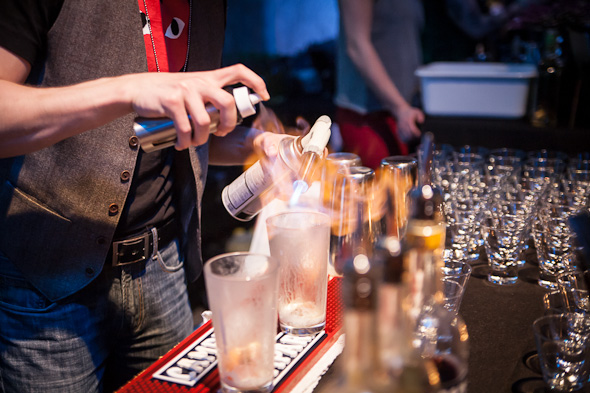 Smoke featured heavily in the drinks, perhaps a nod to the nickname out-of-towners have christened the city with. Aaron Beaudoin's (Goods & Provisions) Pineapple Express, with tequila and smoked pineapple juice combining with vanilla hemp bitters, yuzu juice, and agave nectar, was heavy on the smoke, but otherwise a bright and fruity creation. 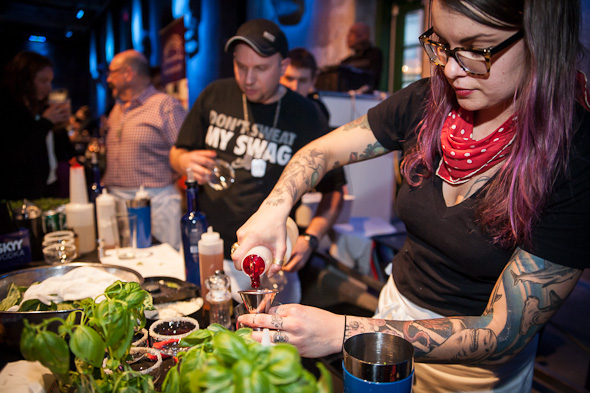 Veronica Saye (Harbord Room) also smoked juice. In her case, tequila was mixed with smoked lemon juice, Cherry Heering, and a cola/chili syrup (made by reducing cola down with chili flakes). Named the Heather Jean, it reminded me of a Cherry Coke, but with a well-balanced hint of smoke. 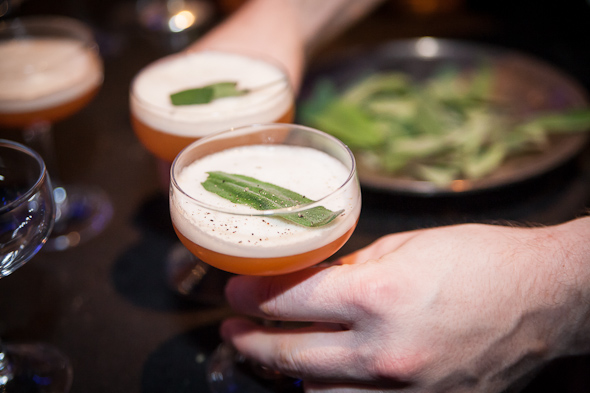 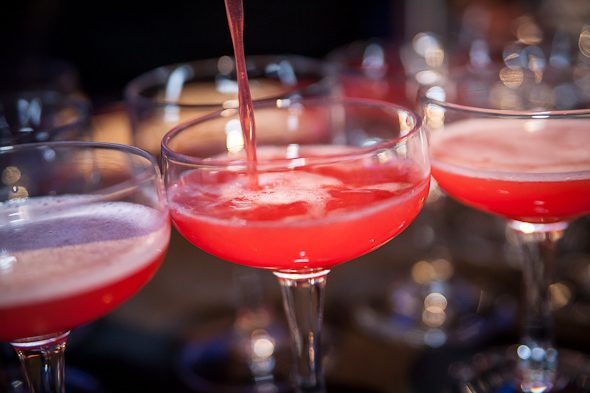 In contrast to the pleasant surprises at some of the levels of invention, I was a little astonished to see a fairly pedestrian mix of Campari, grapefruit juice, and grenadine (Neil Ramrattan's Penelope Cruz) being served up alongside cocktails that involved some serious thinking. However, once the crowds built, and the pressure to sling out drinks in the hundreds mounted, it was clear that he'd guaranteed himself a fairly easy night, in contrast to some of the teams that had to work at frantic levels to keep up with the demands of their complicated creations. 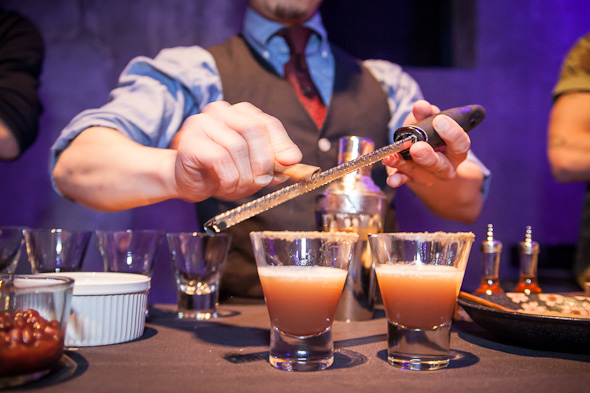 A clear example of this was Atsushi Suzuki's (Kanji) Mr. Redbean: a dizzying array of Canadian Club, Azuki redbean paste, Amaro Meletti, Ximenez Sherry, Teapot Bitters, Kinako, and Sesame Powder. With every drink being made to order, Atsushi and his team were pushed to their limits. The rewards, however, were obvious. A balance of sweet and savoury with a hint of bitterness. I was really impressed with this one. 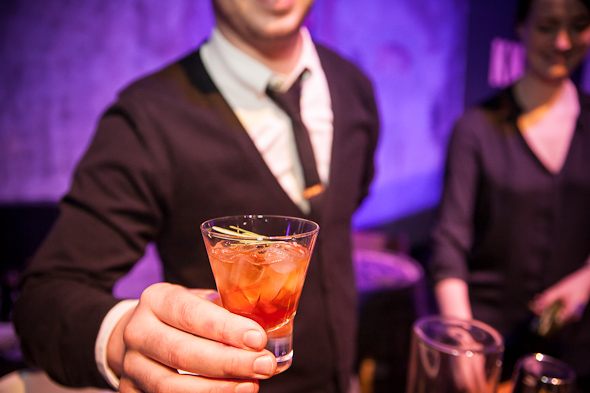 My favourite of the evening, however, was Robin Kaufman's (Toronto Temperance Society) Apples to Ashes. With Appleton rum, cedar-infused rye, cedar-smoked apple syrup, Campari, and Unicum stirred and served on the rocks, Robin walked away with both Public and Judge's choices. The prize for each was a three-day, all expenses paid trip to Cancun to compete in the Made With Love Mexico Tour in August 2013. Given that he won both, I hope he gets a six-day stay instead... 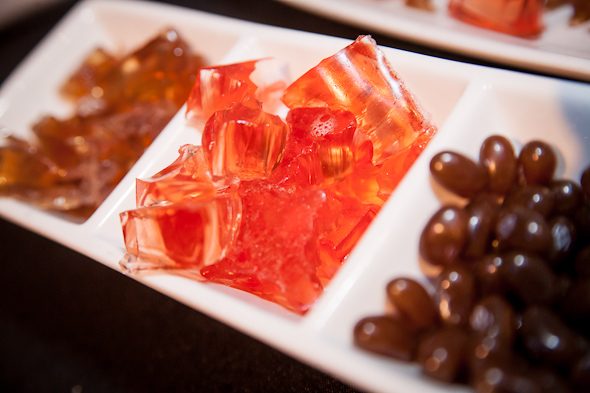 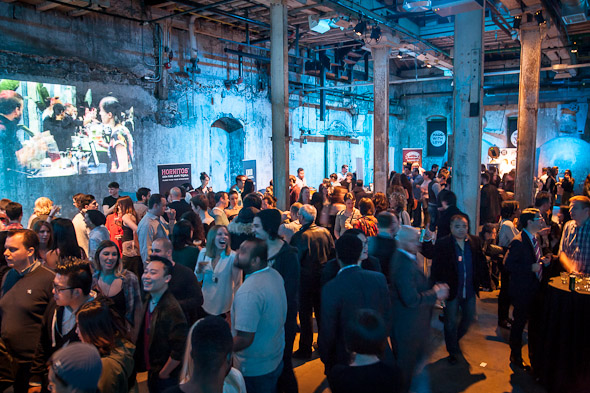 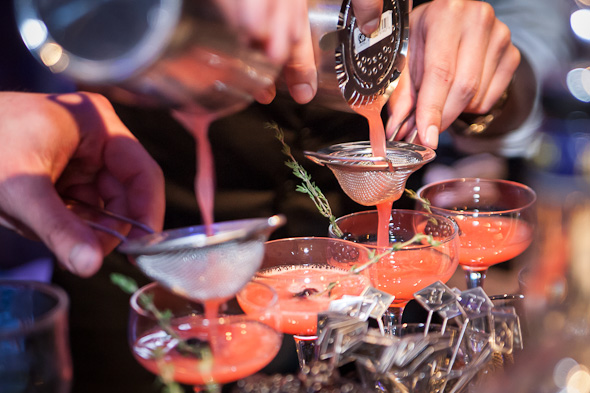