A night out at Eglinton West and Oakwood

The strip of Eglinton West at Oakwood, just west of the Allen Expressway is a diverse, vibrant and 24/7 part of this city, rarely explored by those who keep south of Bloor. Having grown up a little further east on Eglinton, the strip had always enticed me with its vibrant colours, spices and street life, offering an incredible contrast to the genteel streets that characterize Eglinton West closer to my childhood home.

I've always wondered why the city chose to officially name this stretch the "International Market" as the area is predominately known for its Jamaican and East Caribbean businesses and communities (though there's also Italian, Spanish and Filipino residents in the area). Perhaps it's because the distinction between the Eglinton/Oakwood area and its eastern neighbours is so pronounced that it is the poster-child of Toronto's diversity expressed in its urban form.

Official naming thoughts aside, my friends and I decided to return to the area just west of our childhood stomping grounds to experience the night life that Eglinton West at Oakwood has to offer. If you're in the mood for a vibrant, outdoor-bbq fueled street life and an unheard of welcoming sense of community, or you're just hankering for a late night haircut, hang out and patty, you'll find it all here at Eglinton and Oakwood.

Plus, with the coming Eglinton-Crosstown LRT, this area is sure to become even more exciting, so get here before the secret's out. Based on friends' and locals' recommendations, here are some places we explored on our big night out at the "International Market."

Randy's Patties 1569 Eglinton Avenue West
'World famous' and always boasting a line-up on Saturday morning, be sure to start your night here to get your patty fix. Local resident Charmagne Poyer recommends the shrimp patty first and foremost, warning that with their "strong curry taste and incredible spices, these delicious patties are not for the weak." To make the snack complete, buy an accompanying coco bun (Jamaican bread made with coconut milk), cut the bun open, and put the patty in between. Make it here early if you plan to have a late night since they close up at 8:00pm on Friday and 6:30pm on Saturday. 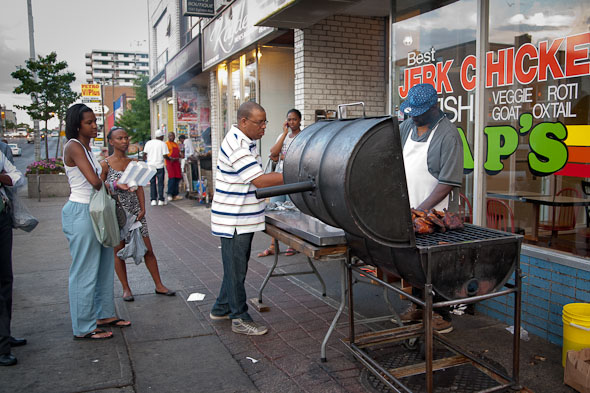 Rap's 1541 Eglinton Avenue West
No good street food in Toronto? Think again. Eglinton east of Oakwood is lined with vendors cooking up meat out of home made oil drum barbecues. Our first outdoor-bbq stop of the night, Rap's, makes a mean jerk chicken, but also offers goat, oxtail, fish and veggie options. Getting your meal involves buying a ticket ($8 for a medium) from the indoor cashier, and exchanging it outside for your chicken, which is cooked fresh, hacked with a giant knife and covered in five ladles of sauce before it's handed to you. 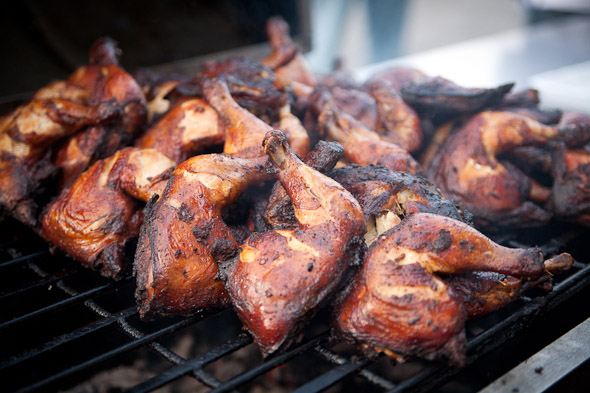 Incomplete without a Grace Island Soda Ginger Beer, this jerk chicken was the epitome of tender, fall-off-the-bone barbecue. Rap's chicken isn't shy with the flavour, and my friends and I had to continuously wipe our brows from sweat while we enjoyed our meal, adding to the stickiness of the humid night. Locals hanging around the bbq added a soundtrack of laughter and good times to our meal, and provided good company while we digested our delicious jerk chicken. And don't worry, the hang-outs go late into the night, as Rap's closes up around 5 or 6 AM. 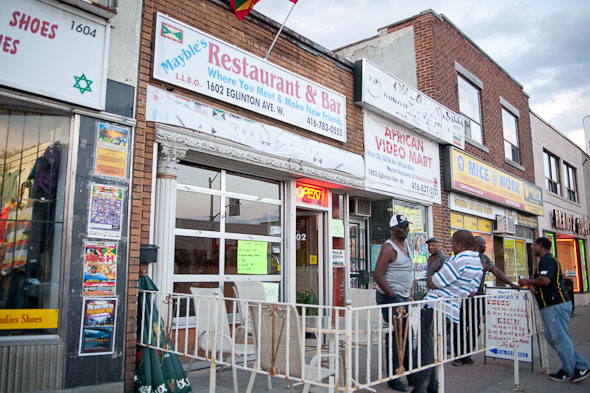 Maybles Restaurant and Bar 1602 Eglinton Avenue West
We needed no recommendations for this place. Walking a little west of Oakwood, the music and good vibes spilt out from Maybles and into the street, its front patio abuzz with chatting and hearty laughter. In business for about 12 years, this Grenadian-owned bar's motto "Where you meet and make new friends" couldn't be more accurate. As we planted ourselves at the large round table on the front patio -- the only table on the front patio -- my friends and I were warmly welcomed into the local scene.

The community vibe lead to flowing conversations, as we drank our way through many Dragon Stouts (a perfect Jamaican beer for a humid night), eventually participating in the Thursday night Karaoke. There's also live music nightly, and be sure to try some of the delicious home-cooked fare--especially the Oildown, a popular and flavourful one-pot stew from Grenada. 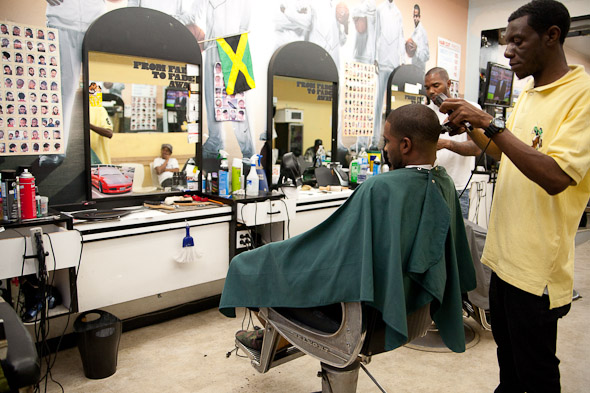 J.C. Barbershop 1567 Eglinton Avenue West
Late night barbershops, along with outdoor bbqs, are one of this area's most unique characteristics. Walk by the several barbershops spread along the street, and you're sure to see large group of locals hanging out, adding to that soundtrack of laughter that seems to define this strip. An Eglinton West staple for 30 years, J.C. Barbershop is a great spot for a haircut and hangout. Joe the barber is an important community leader, sponsoring kid's soccer teams, and offering free haircuts at local schools. While your haircut won't be free, at $10 it will be cheap, and probably the most social 'do you'll ever get (especially if you stroll in after a few hours at Maybles). 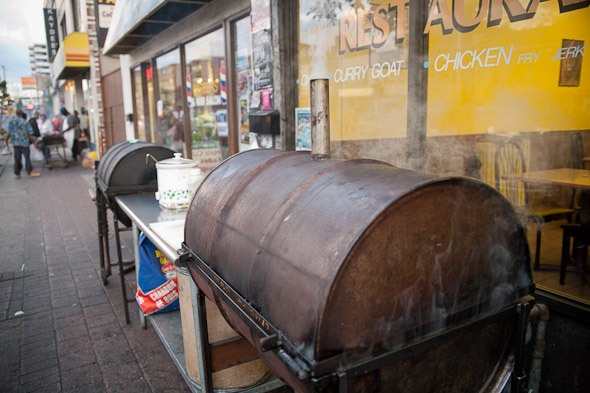 Hot Pot 1545 Eglinton Avenue West
Maybe your night on Eglinton at Oakwood won't involve two stops at the outdoor bbqs, but after laughing and singing at Maybles, and a good haircut at J.C. Barbershop, our stomachs were rumbling. Hot Pot is located just down the sidewalk from Rap's and contributes to bbq row (along with Spence's Bakery, 1539 Eglinton West). Also $8 for a medium and $10 for a large, the jerk chicken at Hot Pot has an awesome smokey flavour. If a little dry, the chicken can be improved by a good dousing of sweet hot sauce, making those last crispy pieces even more delicious.