"Why is this here? Why not on the huge space to the right of the road?" asked personal injury lawyer and cyclist advocate Dave Shellnutt (aka The Biking Lawyer) when sharing a photo of the porta potty on Twitter this week.

"Cyclists are forced to dodge this toilet right after a streetcar track-laced intersection to get to an otherwise unobstructed bike lane. Cars accelerating out of the intersection make this quite dangerous."

Shellnutt, whose practice specializes in representing injured bikers and other vulnerable people, noted that the blue porta potty had been blocking the eastbound bike lane on College (just east of McCaul) for five days as of Thursday afternoon.

In 2023 we'd like an end to bike lanes used to store toilets. There is zero construction at College/McCaul. @311Toronto @TO_Transport why has this been here for approx. 5 days? The nearest lane obstruction is a poorly marked construction vehicle a half km away. Cc @DianneSaxe pic.twitter.com/h4ON4ZRwmM

Someone at 311 Toronto told Shellnutt on Thursday that they had forwarded his concerns "to the project team for review and response," confirming that they were aware of the situation.

Two bright orange traffic cones appeared in the bike lane on Friday morning — one in front of the toilet and one beside it.

Ironically, while road work is taking place on and off along various stretches of College Street, there does not appear to be any active construction site in the immediate area.

Construction vehicles were spotted blocking the same bike lane a few blocks east of the porta potty on Thursday, though it's unclear if these projects are related. Heck, it's unclear if the toilet is related to any project right now, municipal or private.

Could it have been left behind by crews who recently completed work in the area? Could someone have dropped it square in the middle of the bike lane to antagonize cyclists? Could it be some sort of art installation?

The City of Toronto has yet to respond to blogTO's questions about the mysterious toilet, but the presence of those branded cones suggest they're on the case. 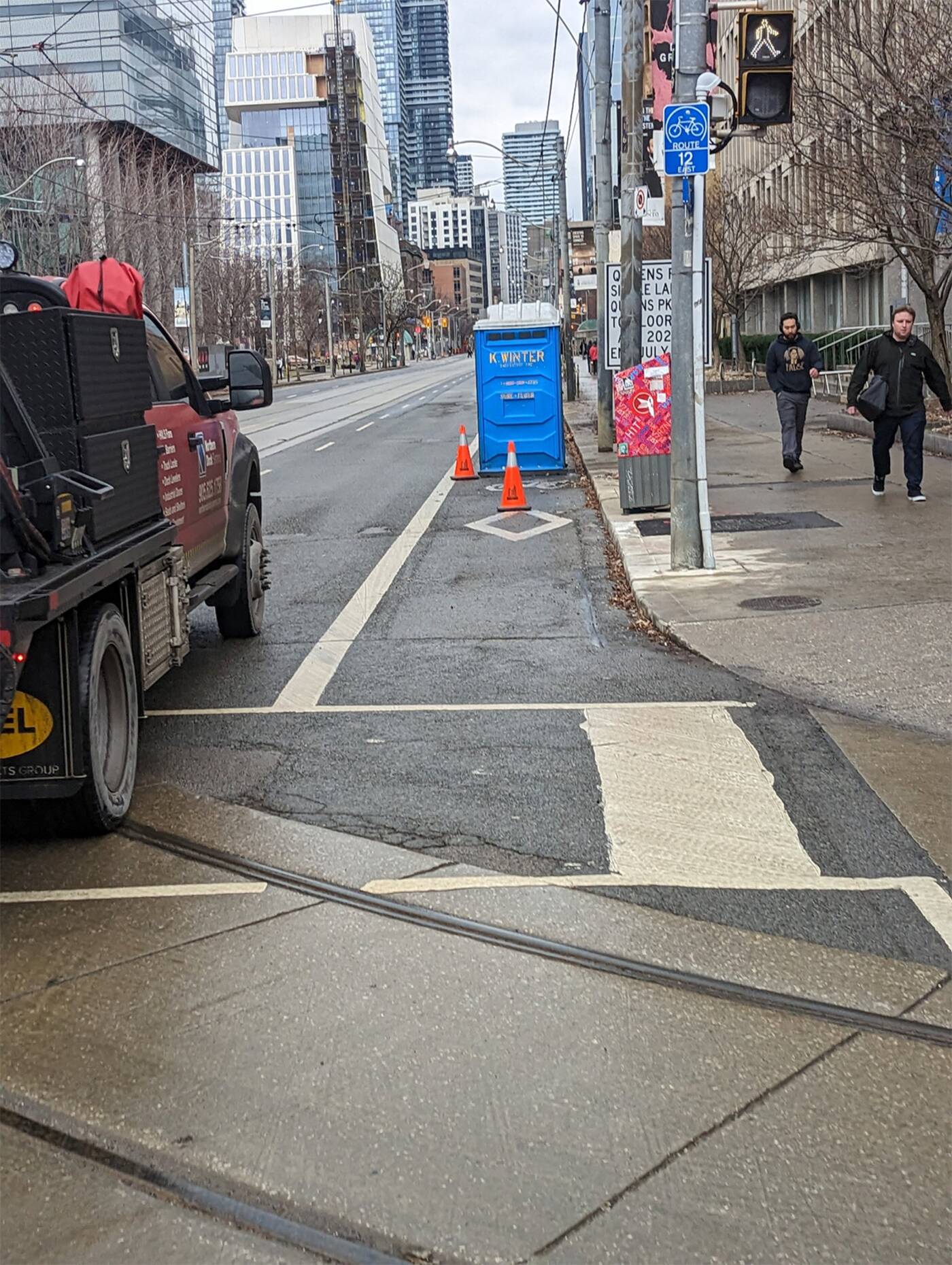 Cyclists using the eastbound bike lane on College Street near McCaul and University now have to navigate around a large blue portable toilet and two traffic cones. Photo by Dave Shellnutt.

This isn't the first rogue street toilet to make commuting more difficult or dangerous in downtown Toronto, and I wager it won't be the last.

Cyclists, pedestrians, business owners and drivers alike have been complaining more and more frequently in recent years about the impacts of rampant construction on their lives and livelihoods.

Watermain repairs, TTC streetcar track replacements, lengthy infrastructural delays and an abundance of residential development have made getting around Toronto more difficult than ever lately, and there doesn't seem to be anyone enforcing any rules at noisy, dusty, street-blocking work sites.

"Regular and widespread road construction is necessary for the City's healthy growth, however when project management results in abandoned construction sites, or unjustified lane closures, it negatively affects traffic plans, safety and commerce," wrote Ward 6 Councillor James Pasternak in a motion targeting the issue this summer.

"Numerous constituents [have] concerns over seemingly vacant work sites, sometimes displaying scattered tools, machines, and construction materials... and frequent instances of protracted and seemingly unnecessary road closures. These include lanes on major roads, blocked off by safety pylons, but with little to no sign of active construction."

For Shellnutt and other cyclists, the inconsiderate and unexplained placement of this portable toilet isn't just annoying. It's life-threatening.

"As lawyers for injured cyclists, we have more than a handful of claims caused by negligently placed construction materials," Shellnutt told blogTO on Friday.

"We have seen cyclists seriously injured by unmarked fences in bike lanes and blockages like this."

This is an incredibly dangerous/confusing bike lane diversion we have noted before. I almost got hit. If someone got injured here we would absolutely take that case. @311Toronto can you keep people safe on college west of Elizabeth @EllisDon construction site @NotSafe4BikesTO pic.twitter.com/bPDWSEfnnj

With tensions already high between cyclists, drivers, construction crews and pedestrians, some wonder if the placement of the porta potty smack dab across the middle of a bike lane might be intentional.

"I think many cyclists online rightfully question whether this kind of thing is intentional, coming from a familiar anti-cycling trope pervasive from the mayor's office and TPS to regular citizens," said Shellnutt.

"Even if it isn't, the metaphor it sends stinks."

People responding to photos of the porta potty in question are shedding even more light on how little the city is doing to protect citizens from stinky old toilets.

One might even think, looking in from the outside, that Toronto cares less about the rights of cyclists than it does about preventing contractors from breaking the law or cleaning up the messes they leave behind.

we had that issue on carlton nr loblaws. A porta toilet was left there for 5 months by the construction crew. city hall said it was the company’s problem but wouldn’t tell us who we need to contact.

finally someone put up a real estate sign on it and it got hauled off quick.

While he's not arguing against the closure of bike lanes for legitimate reasons, Shellnutt is questioning the city's criteria (if any) for allowing things like this to happen.

"If there is a purpose for this toilet being in the bike lane that is reasonable and requires a lane of traffic to be shut down, fine," he told blogTO.

"However, this should be assessed by city staff and the construction company penalized if this is not part of some pre-approved plan that accounts for the safety of road users."

"Perhaps Toronto should have a mobility squad like Montreal and apply real penalties that result in loss of contracts to repeat offenders," suggests the lawyer and advocate.

"The cost to our communities of people being injured surely outweighs the benefit we dole out to contractors. It's time we act like it."