Despite some initial pushback in its early days, the King Street Pilot — known as the King Street Transit Priority Corridor now that it's permanent — was at one point a resounding success, by all accounts.

But, residents are noticing that the City of Toronto seems to have neglected parts of the five-year-old infrastructure associated with the project, including public realm improvements and, more importantly, features designed to keep transit riders and other pedestrians safe.

One day, the King Street pilot project set up will be remade with more permanent curbs and barriers. But when will that be? The cheap ugly Jersey barriers still line the sidewalk in front of Union Station, years since more attractive and permeable bollards were promised. https://t.co/mbO0Q5JORO

Launched in fall 2017, the initiative brought a ton of changes to a chunk of the city's busiest streetcar route: colourful new seating, plants and functional street art were added to curb lanes; and stops were relocated, likewise moved to curb lanes and guarded from vehicles with painted concrete barriers and bollards.

Most importantly, the flow of traffic was completely altered, with cars prohibited from turning left or going straight through most intersections, expediting and prioritizing the previously sluggish movement of streetcars through gridlock. 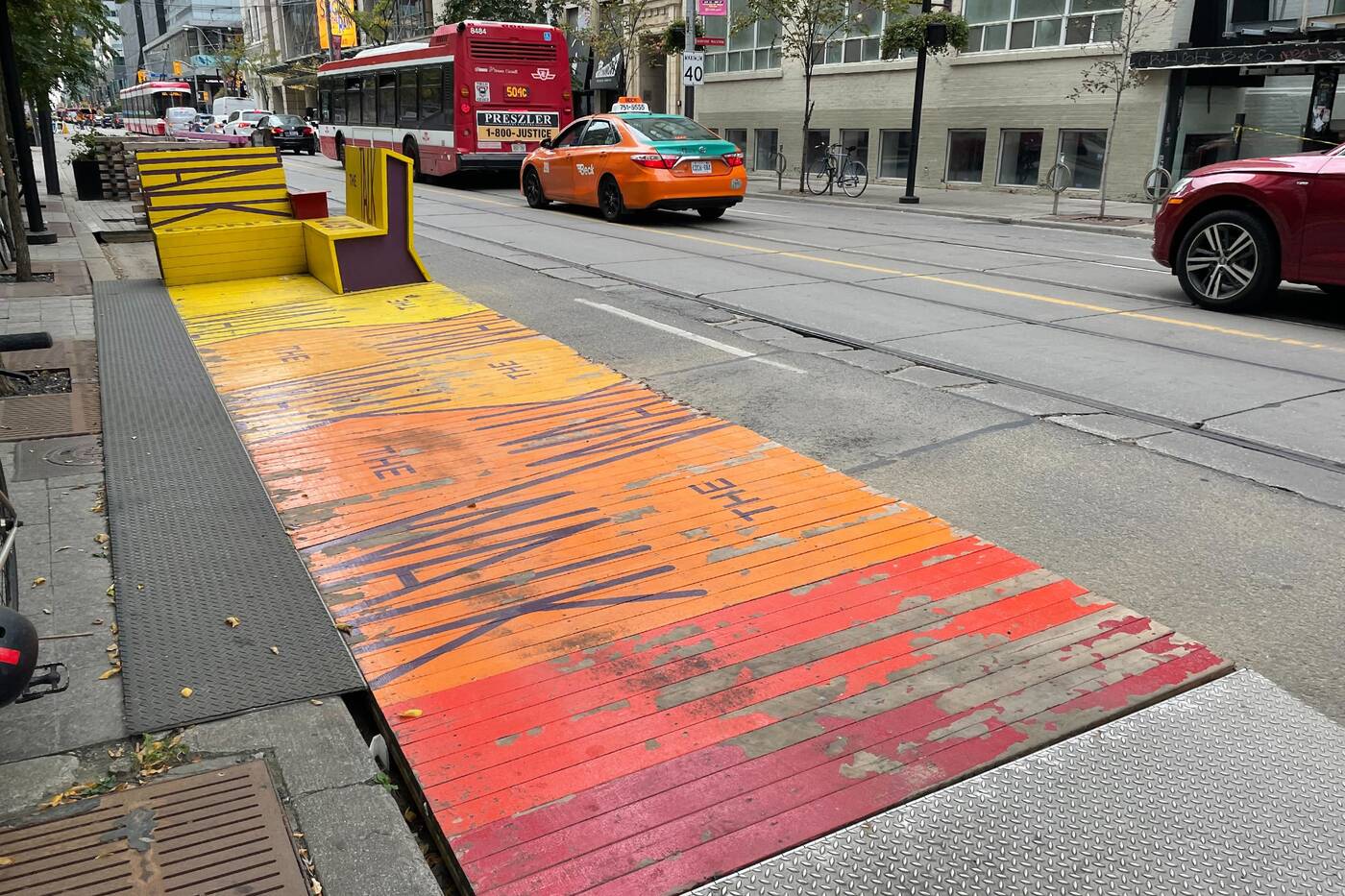 Normal wear and tear has fixtures on King Street looking a little shabby.

It was such a success that City Council extended the pilot, then made it permanent in 2019.

This city still cares more about cars than people.

But, following this landmark move, it doesn't seem as though the city has done too much to maintain the new stops, which are now visibly worn down and missing key elements.

Upon an inspection of the entire stretch of the corridor from Bathurst to Jarvis, blogTO found that nearly every stop in both directions had multiple missing bollards meant to safeguard people waiting for a streetcar from cars — multiple stops had only one, or none at all. 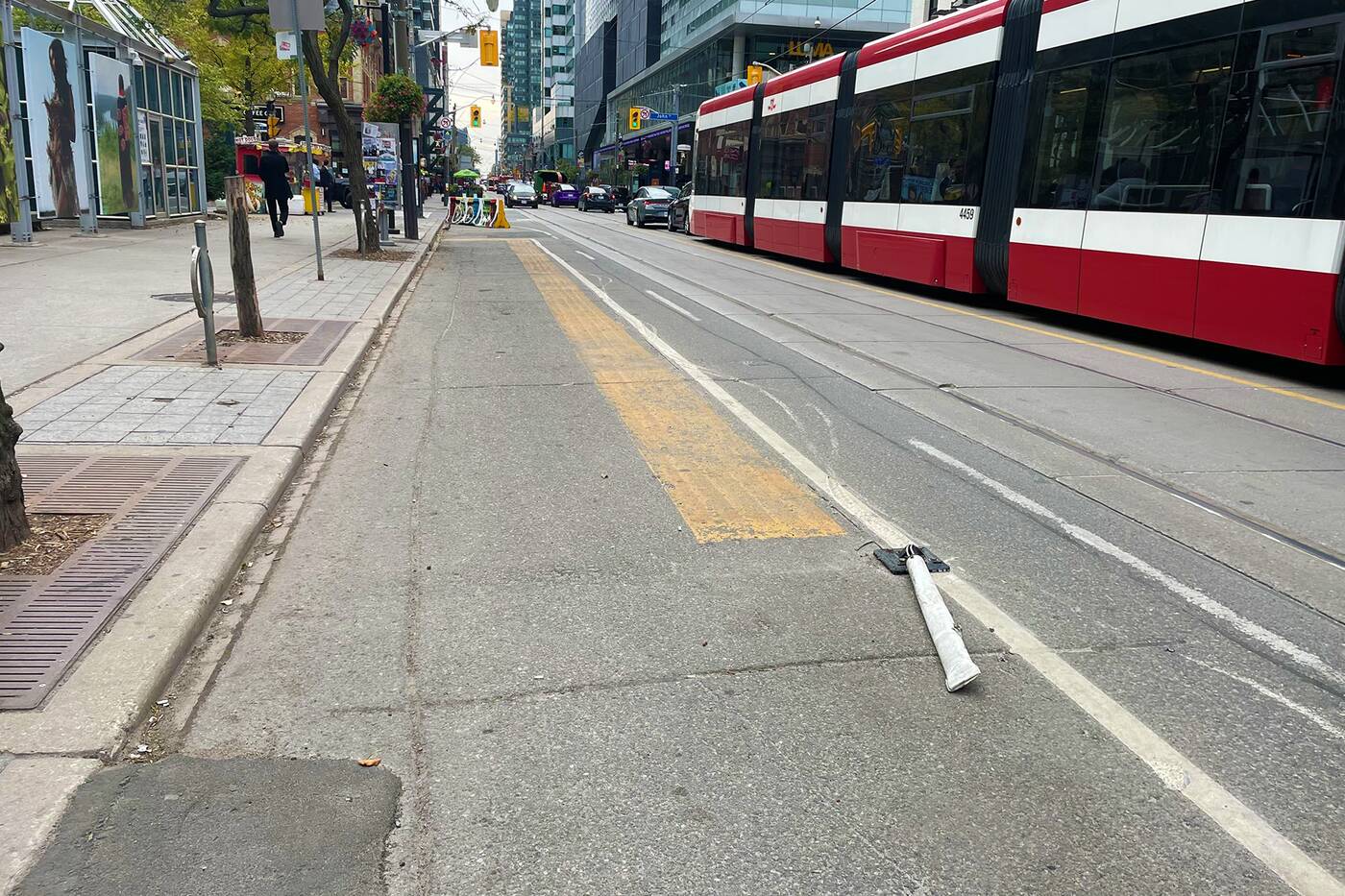 The safety features of virtually all stops along the corridor have been knocked over or removed.

And, while some of the seating areas and parkettes created for the project are still in good form and being used, others seem to have disappeared, or could use some maintenance work at the very least.

The stops are notably less vibrant and more run-down than before to the point that even those behind its design have called it "kind of embarrassing" when speaking with the Star, though the key impetus of the pilot — the calming of traffic on the route — remains.

But, many report that even that is becoming an issue. 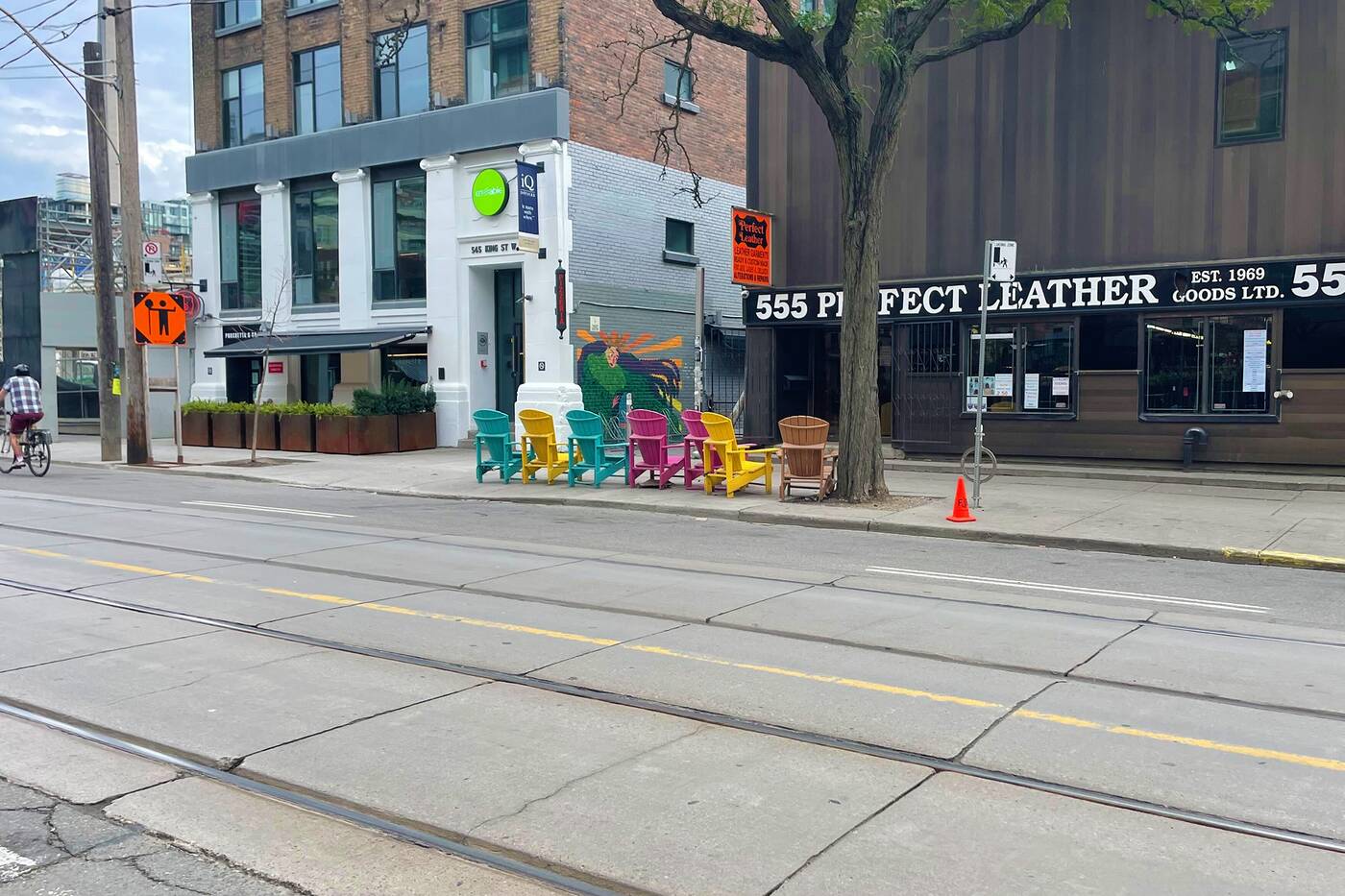 While the parkettes near Peter Street are still in good shape and being used, this is not the case for others on the route.

People have been complaining online that progressively more drivers are choosing to simply ignore the signage indicating they can't drive straight through intersections, and don't appear to be facing any repercussions.

(During an hour or so jaunt along the street on Thursday afternoon, I witnessed at least one vehicle doing so.)

Toronto police say, though, that they continue to enforce the rules of the road just the same on King Street, with its special orders, as they always have and do everywhere else in the city, with a focus on the main four things that lead to serious injury and death: speeding, aggressive, distracted and impaired driving. Disobeying signage falls under the second.

People seemed to adhere to it pretty well until recently

As far as driver behaviour is concerned, TPS traffic safety expert Constable Sean Shapiro says that it's not just on King Street that drivers don't seem to be following the rules like they used to.

He adds that tickets in the area are, of course, still being issued, though authorities aren't sitting parked and waiting like they once were in the very early days of the program when the rules were still new.

Shapiro recommends residents file any complaints about traffic issues in their neighbourhood via TPS's online portal, and the force will ramp up enforcement efforts accordingly. Or, they can ask Shapiro directly through his Ask A Traffic Cop series on TikTok and other platforms.

On the first day the King Street Pilot was in effect, I heard police officers telling drivers that they thought the whole thing was silly. Half-assed enforcement followed, and has now seemingly almost stopped entirely. This is a pattern. https://t.co/NBvObrbxJV

One thing that is hopeful is the fact that the city has indeed acknowledged that some maintenance work has to be done to the stops — some broken bollards photographed by passersby just at the end of September have been removed as of October 6, their former locations marked with neon spray paint, ostensibly for replacement plans.

These fixtures were only ever designed to be temporary for the pilot, anyhow, with the city telling blogTO that they are waiting for some private redevelopment streetscape reconstruction to finish up — as there are a number of major condo and other projects currently in the works on King — before they revamp the stops. 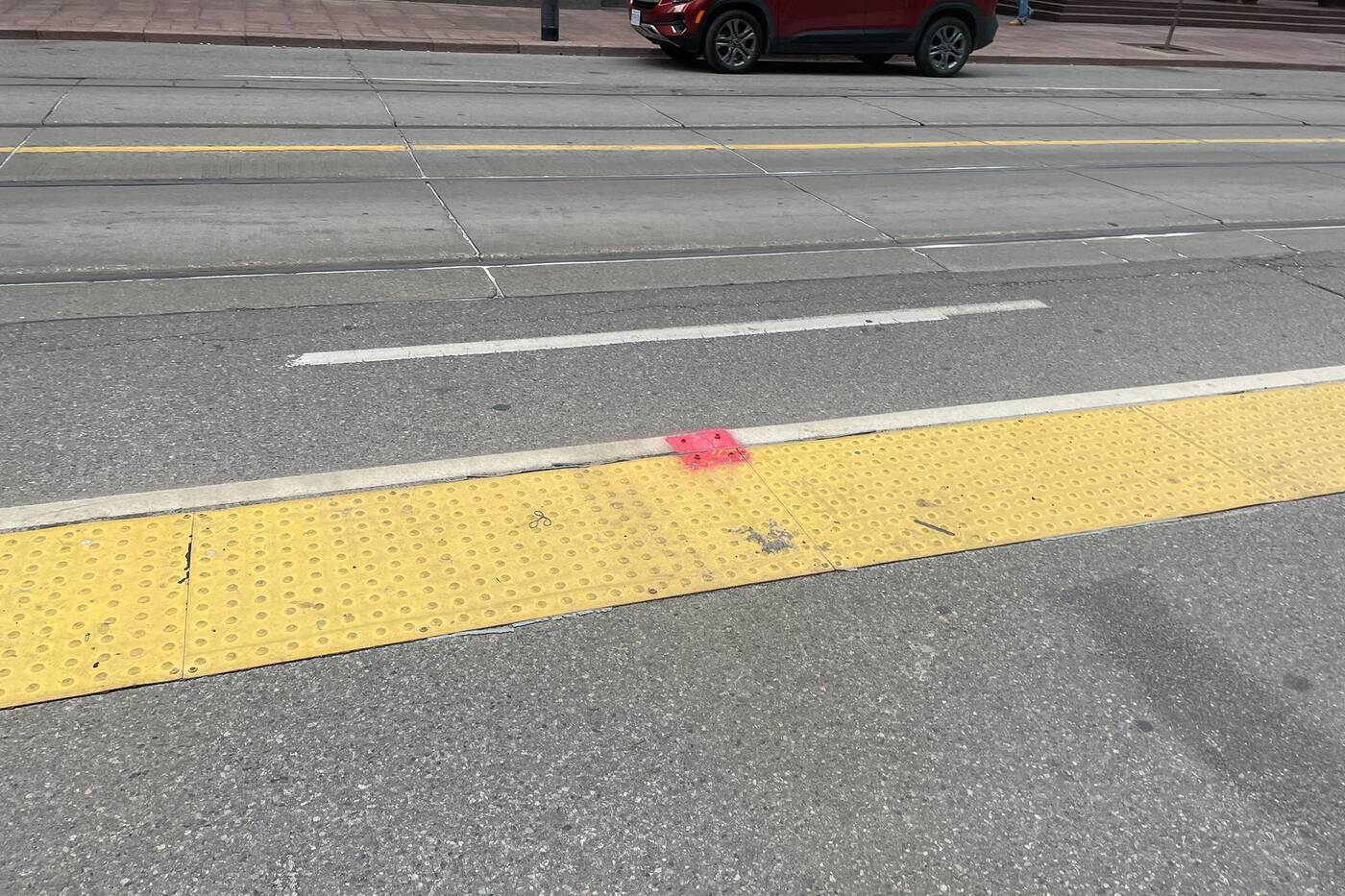 The city seems to have removed broken bollards and identified areas for the installation of something more permanent after private projects nearby are complete.

"The city is coordinating permanent streetscape construction to be installed at the same time," a spokesperson told blogTO.

"Until this work takes place, the city has installed a number of near-term improvements to the public realm along King Street. These features are inspected and maintained by the city regularly."

These include raised stop platforms at Portland and Peter Streets.