The City of Toronto is starting to gussy up King Street in a major way as warm weather moves into the region and humans move into the sunshine outdoors.

As promised back in December, Toronto is moving forward with its plans to install 19 "vibrant, animated public spaces" between Bathurst and Jarvis in the curb lanes where car traffic has already been restricted by the King Street Pilot Project. 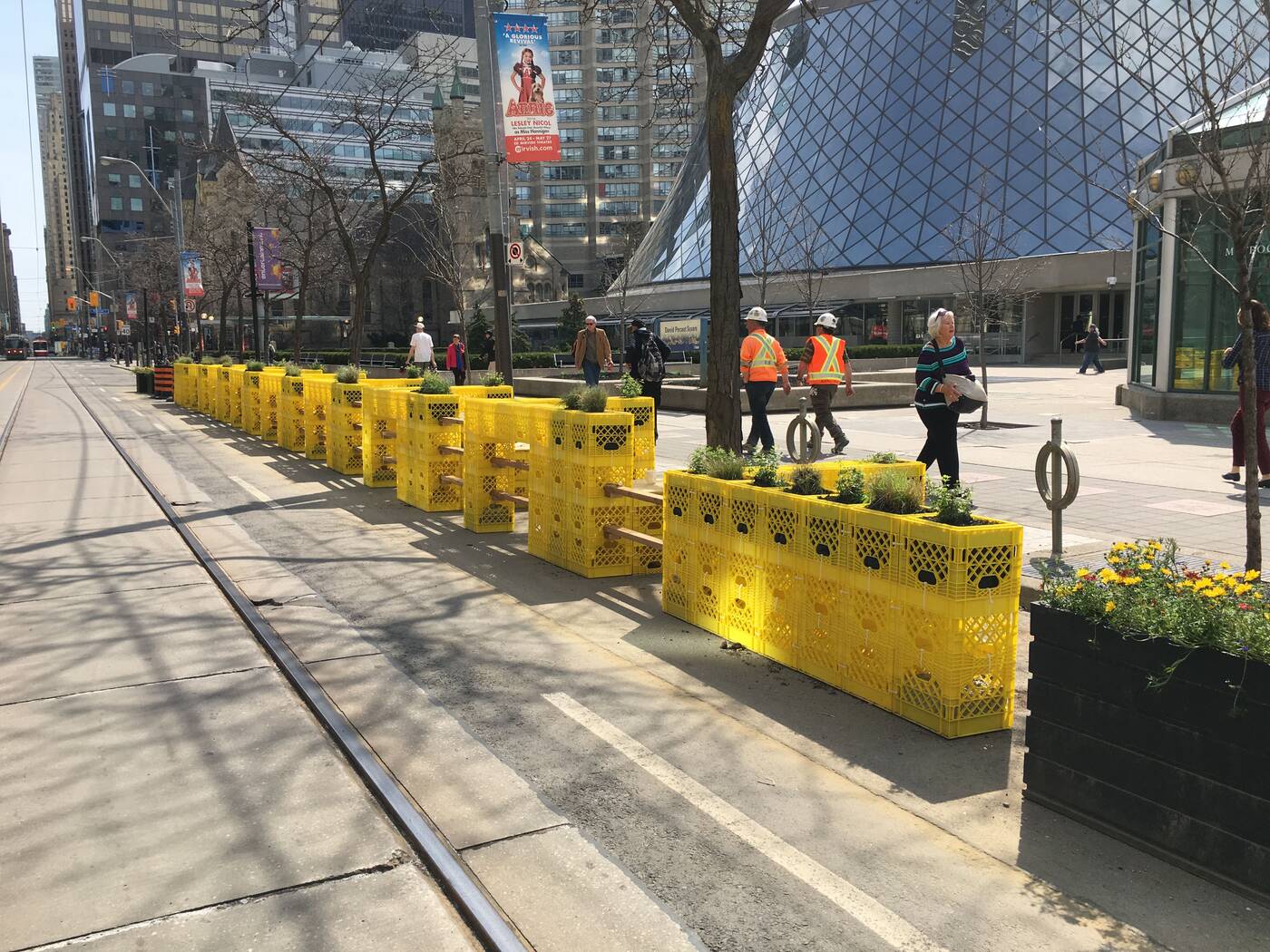 You know those blocked off lanes near intersections in the pilot area? The ones behind those colourful concrete jersey barriers with nothing in them for the length of an entire streetcar or two?

By summertime proper, they should all be filled with temporary public space installations and durable destination parklets. 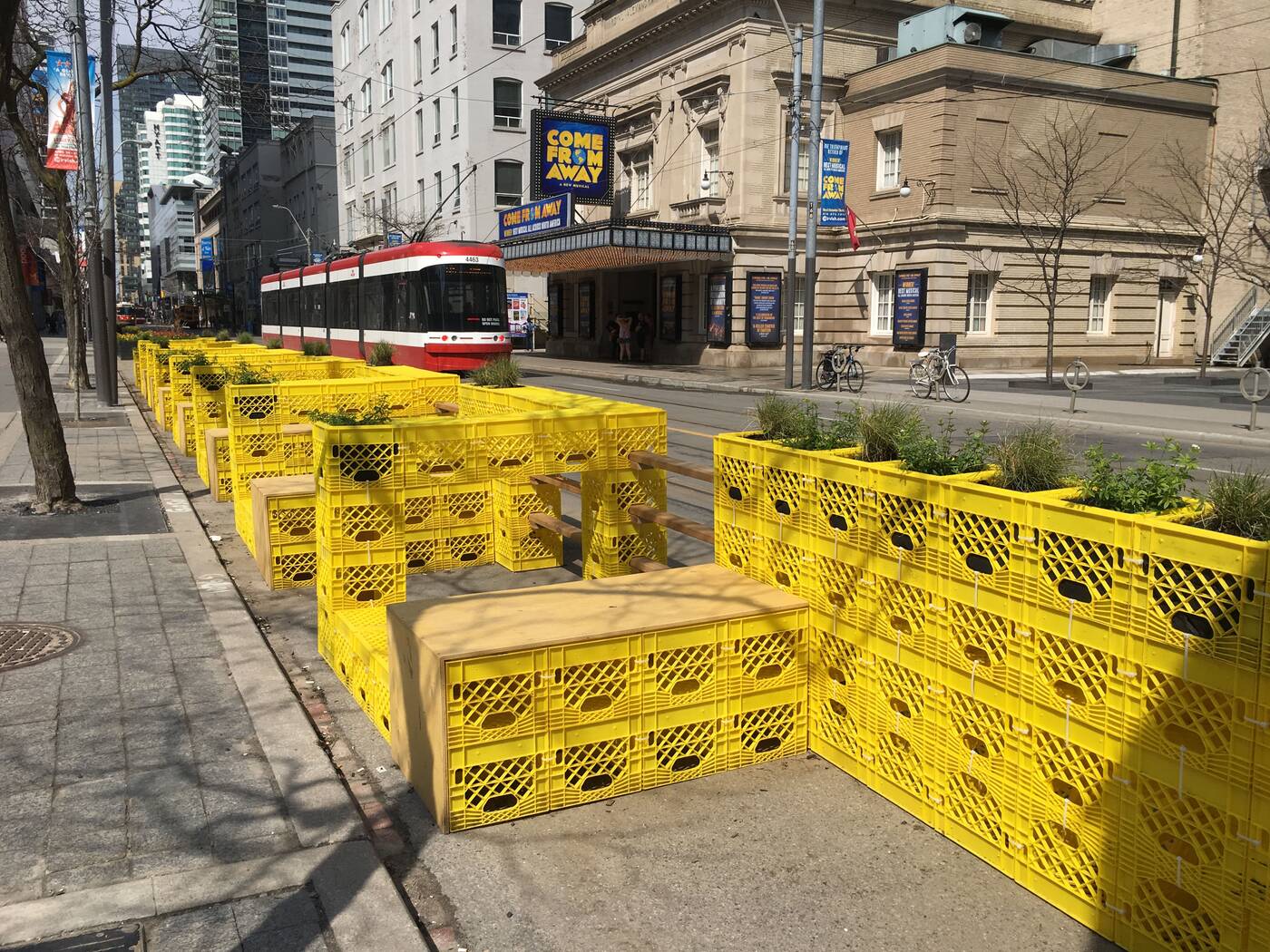 It's all part of Mayor John Tory's plan to get more people hanging out, eating in and enjoying the transit pilot area (you know, in addition to the some 65,000 daily streetcar riders who've been loving their shorter commutes.)

A design competition was launched in January to solicit ideas for the 19 spaces, which range in length from 17 to 170 m.

The City said at the time that it hoped to see them serve "a variety of uses" including relief valves for pedestrians on crowded sidewalks, additional seating for local restaurants and cafes, bicycle parking and space for creative installations.

The winners of that contest are now public via the City of Toronto's website, and at least one chosen design has already been brought to life in front of David Pecaut Square. 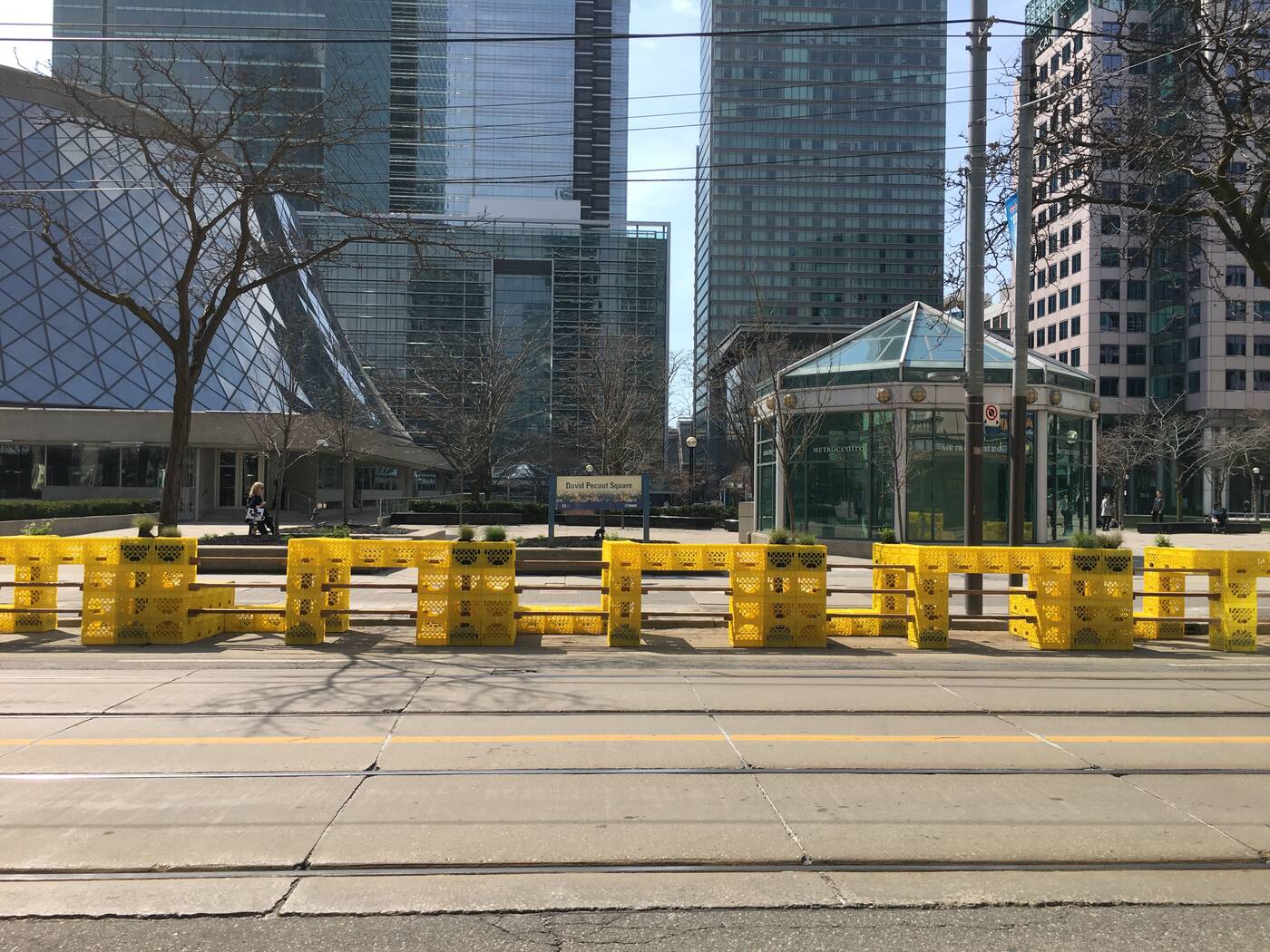 Called "Everyone is (a) Kid," the temporary public space installation is essentially a very long interlocking bench and planter structure made with yellow milk crates. 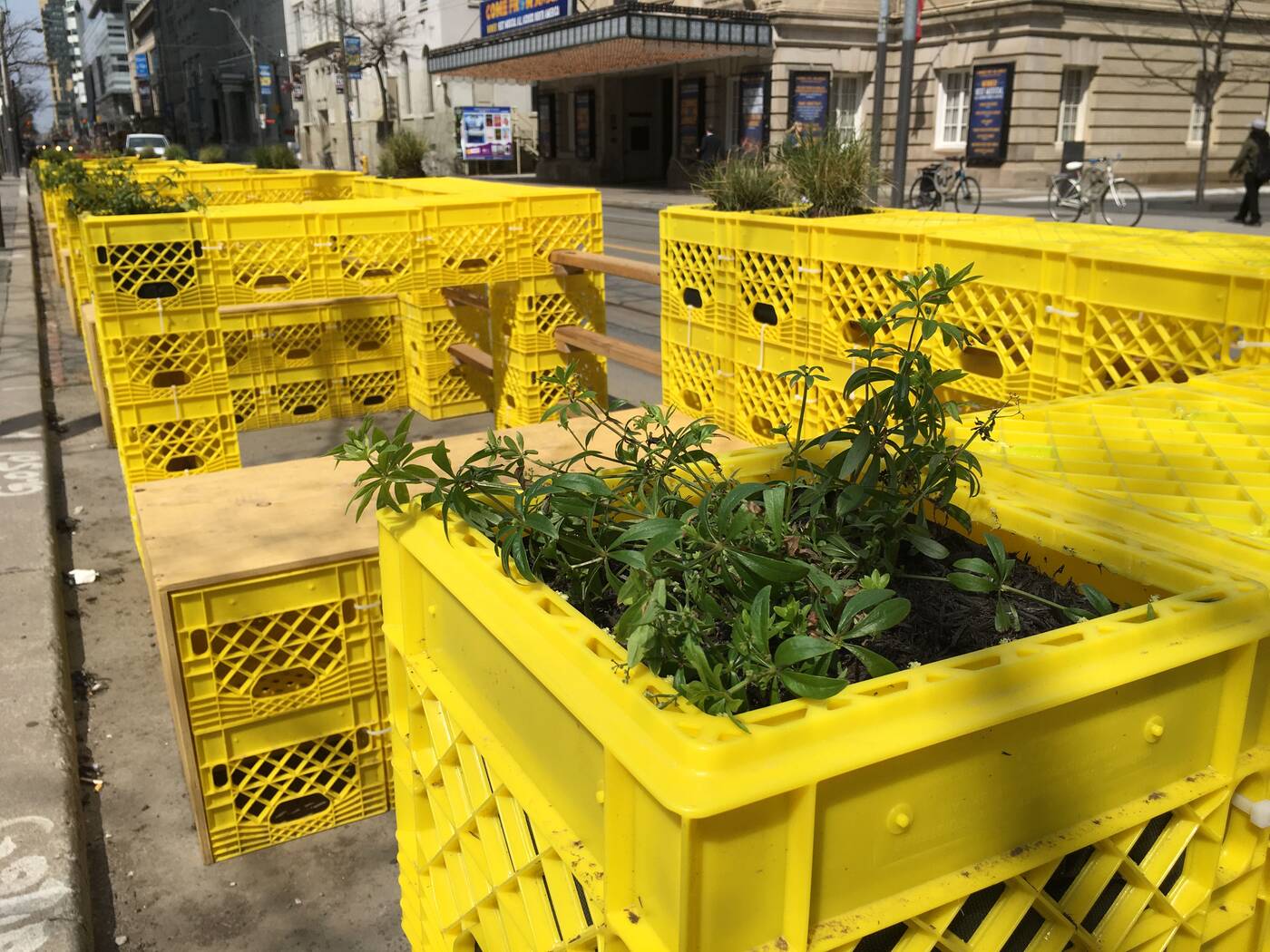 "Every kid needs a place to play and every adult needs a place to feel like a kid again. Everyone is (a) Kid integrates a light-hearted splash of childhood into the public realm," reads the project's description on Toronto's website.

"Through a simple medium – milk crates, the Lego-inspired form offers a place for relaxation, wonderment, and exploration… whether you are savouring a fresh brewed coffee, basking in the sun at lunch, or hanging out with your kids on a Saturday afternoon." 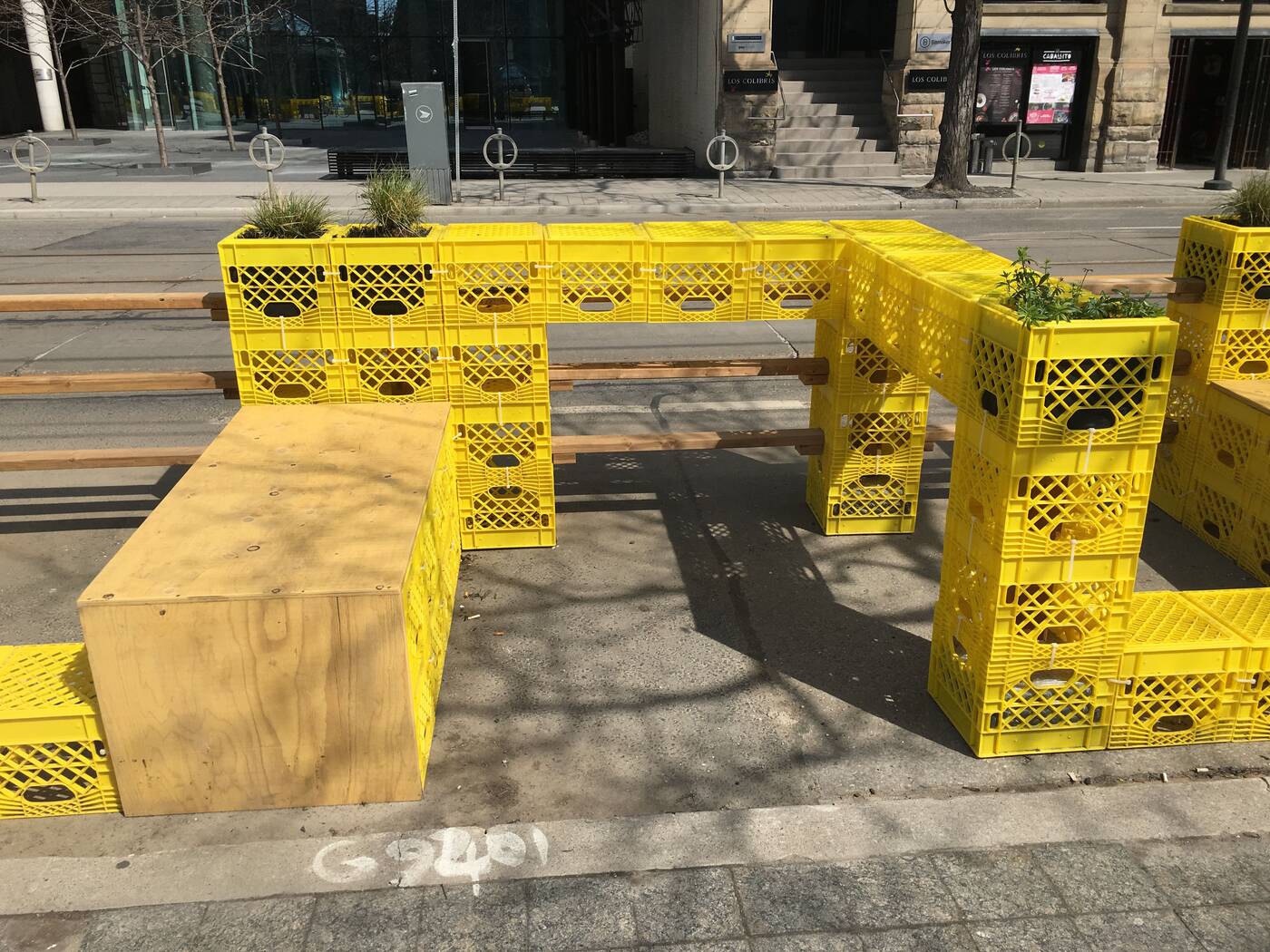 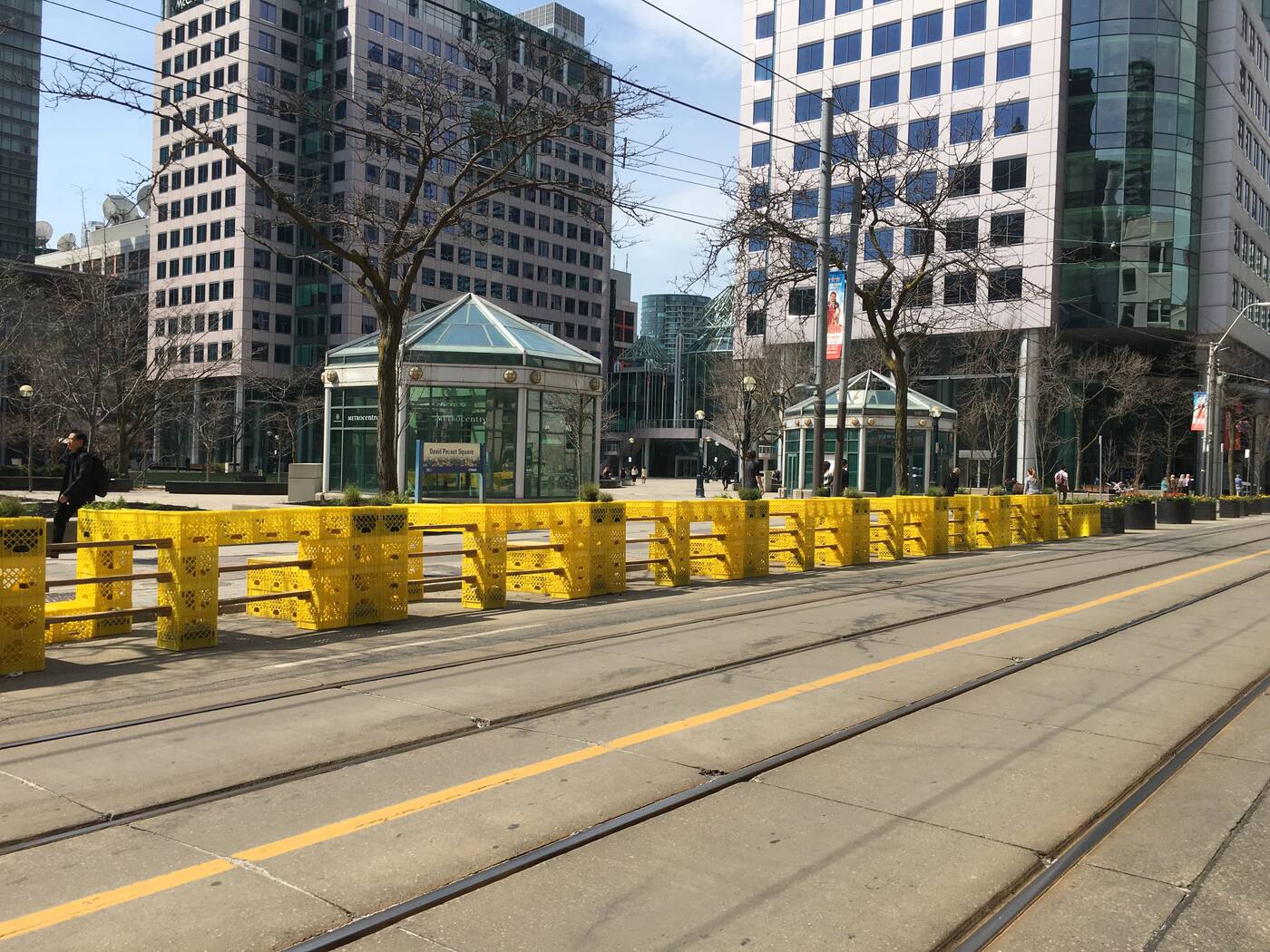 All of the public installations and parklets solicited by the design build competition were meant to be rolled out by May, though the process was a bit delayed on account of a horrible mid-April ice storm.

Now that the weather is nice, you can expect to see some wicked-zany, interactive installations popping up along King Street with names like "wobble jungle" and "#WouldYouRatherTO."

It's going to be a fun summer.