Content warning: the content in this article, including images of deceased wildlife, may be distressing to some readers.

Hundreds of flightless Ring-billed Gull babies, commonly known as seagulls, were found dead in a Toronto parking lot during last weekend's heatwave. The babies were nesting on top of buildings at Orfus Rd. and Dufferin St. near Yorkdale Shopping Centre.

The birds were nesting on flat, black rooftops that absorb more heat and reach extreme temperatures during the summer. These surfaces become so hot it scorches birds' feet, causing them to jump off to escape. 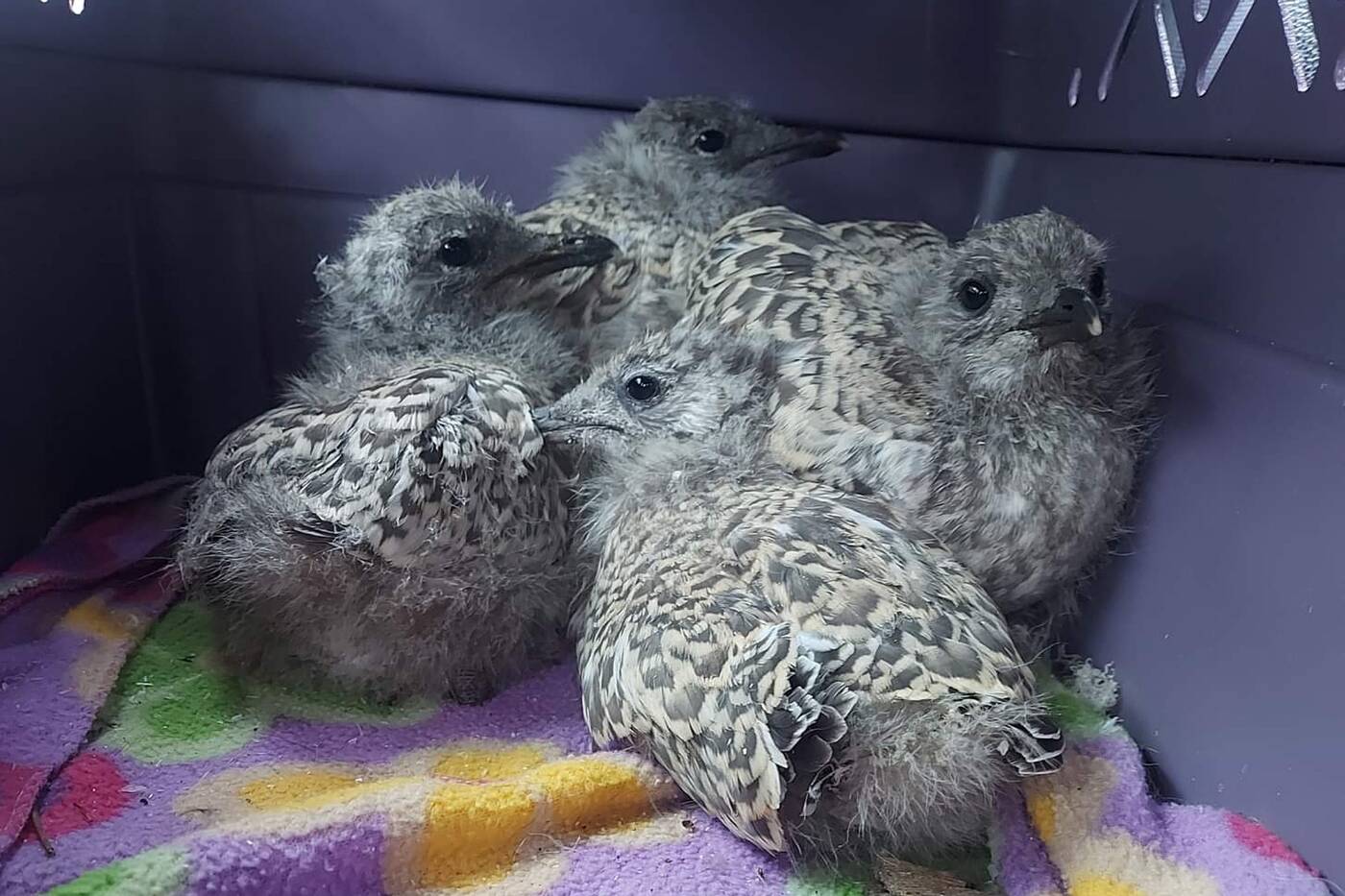 The babies were in the fledgling stage with feathers that were not developed enough to allow for flight.

"The fledglings started to boil and jumped off," says Cathy Stockman, operations manager at Shades of Hope Wildlife Refuge in Pefferlaw, Ontario.

Tragically, the chicks without developed feathers jumped to their death and died on impact. The babies that did survive were able to break their fall because they were further along in the fledgling stage. 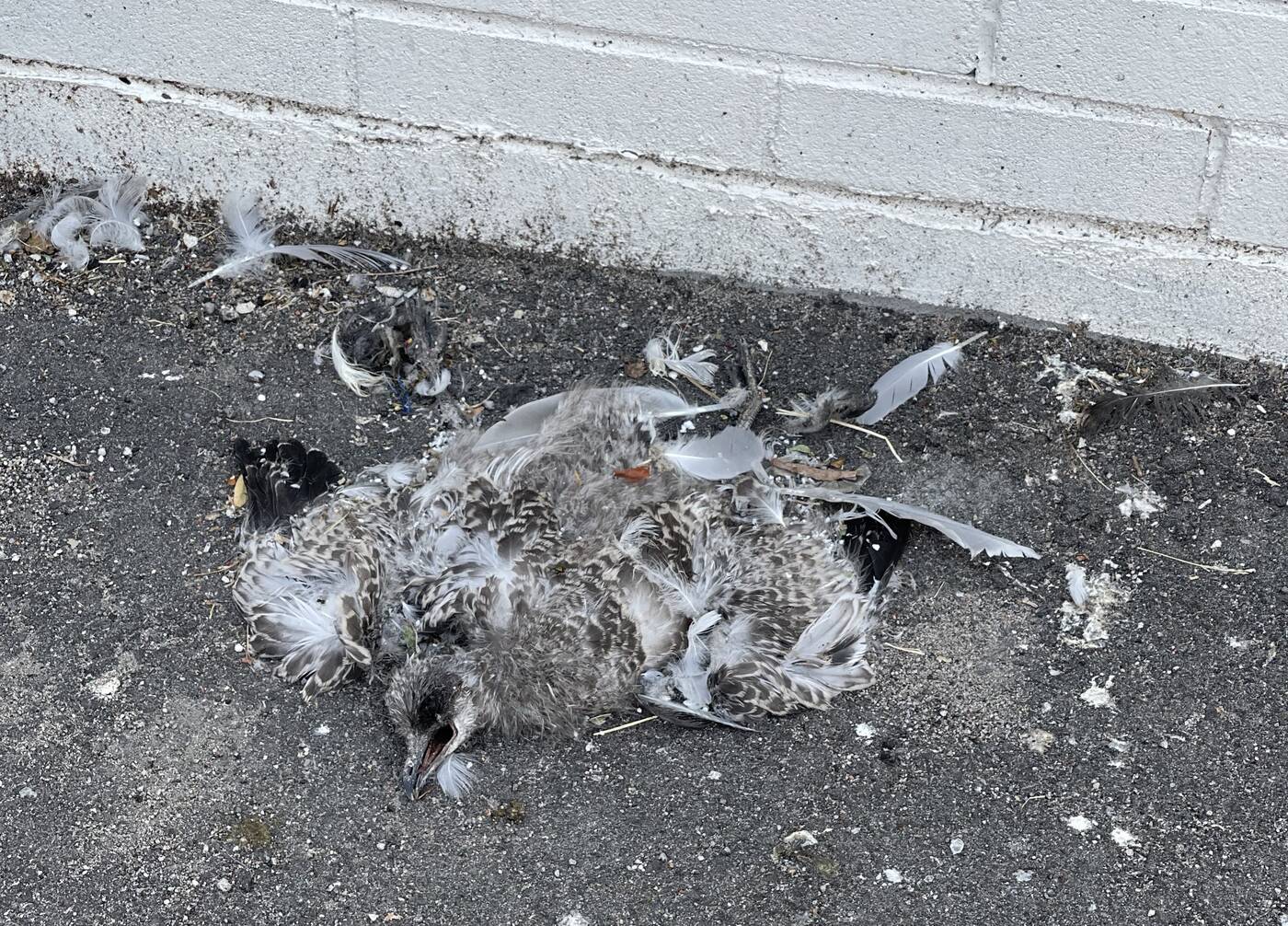 One of numerous deceased gulls near the building.

Hundreds of flightless gull chicks flooded the parking lot and wandered nearby streets. Many were run over by vehicles and at least 60 bodies were found flattened on the road. Volunteers dubbed the event 'Gull-mageddon'.

The fledglings at this age are entirely dependent on their parents. They do not have flight ability, and if abandoned, have no access to food and water, and are ultimately defenceless against predators. 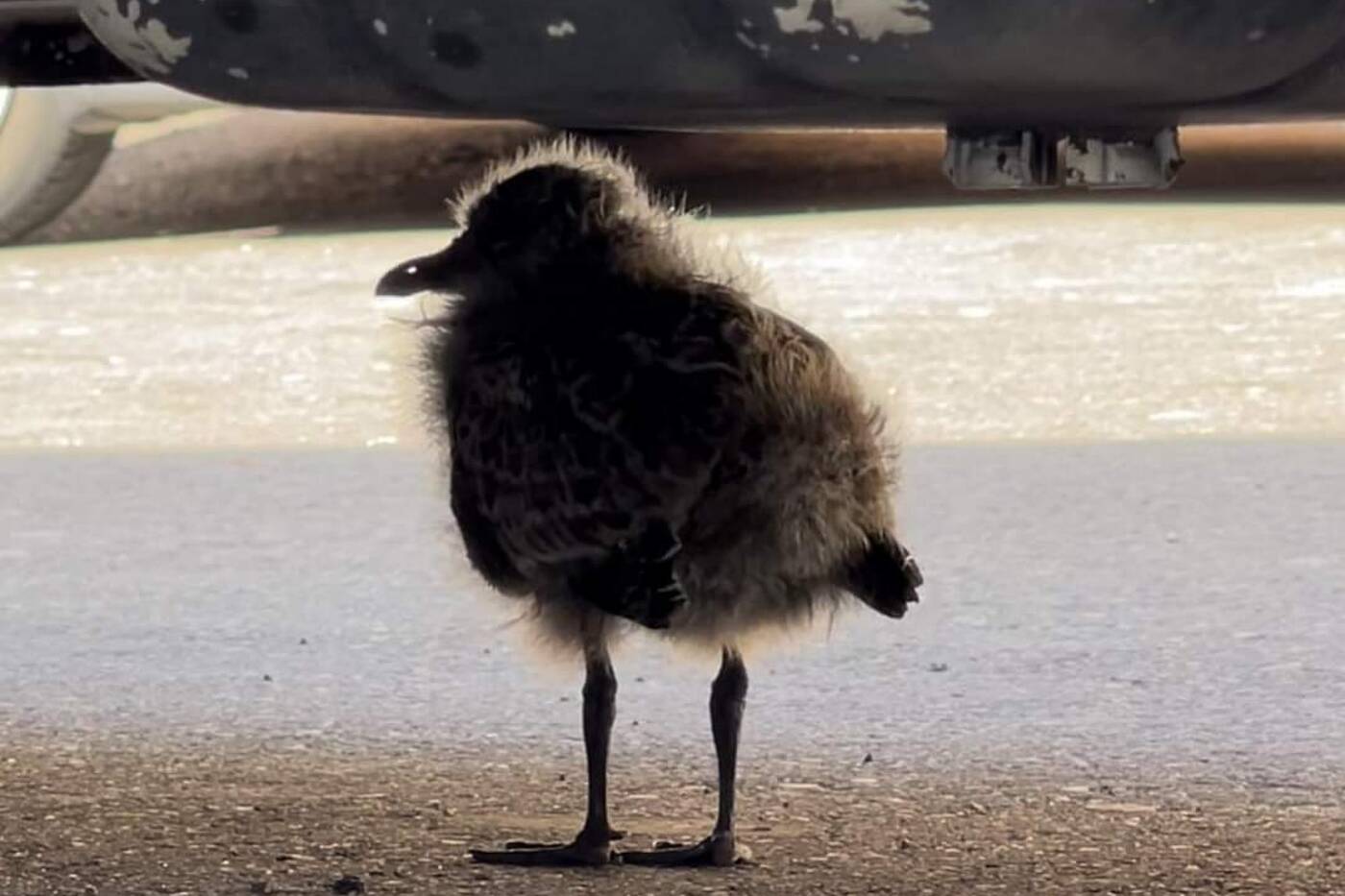 One of the gull chicks taking refuge under a car.

Pia Sarker - founder of New Cat City and Toronto Chicken Save - was in the area feeding a colony of feral cats when she first spotted the birds.

"There were so many deceased birds and dozens of live fledglings wandering around and sheltering in the shade underneath the cars. It was a bizarre scene," Sarker says. There were too many to contain on her own and she initiated the first call for help on social media.

Dozens of local volunteers rushed to the scene to contain hundreds of babies who appeared to be injured or abandoned. 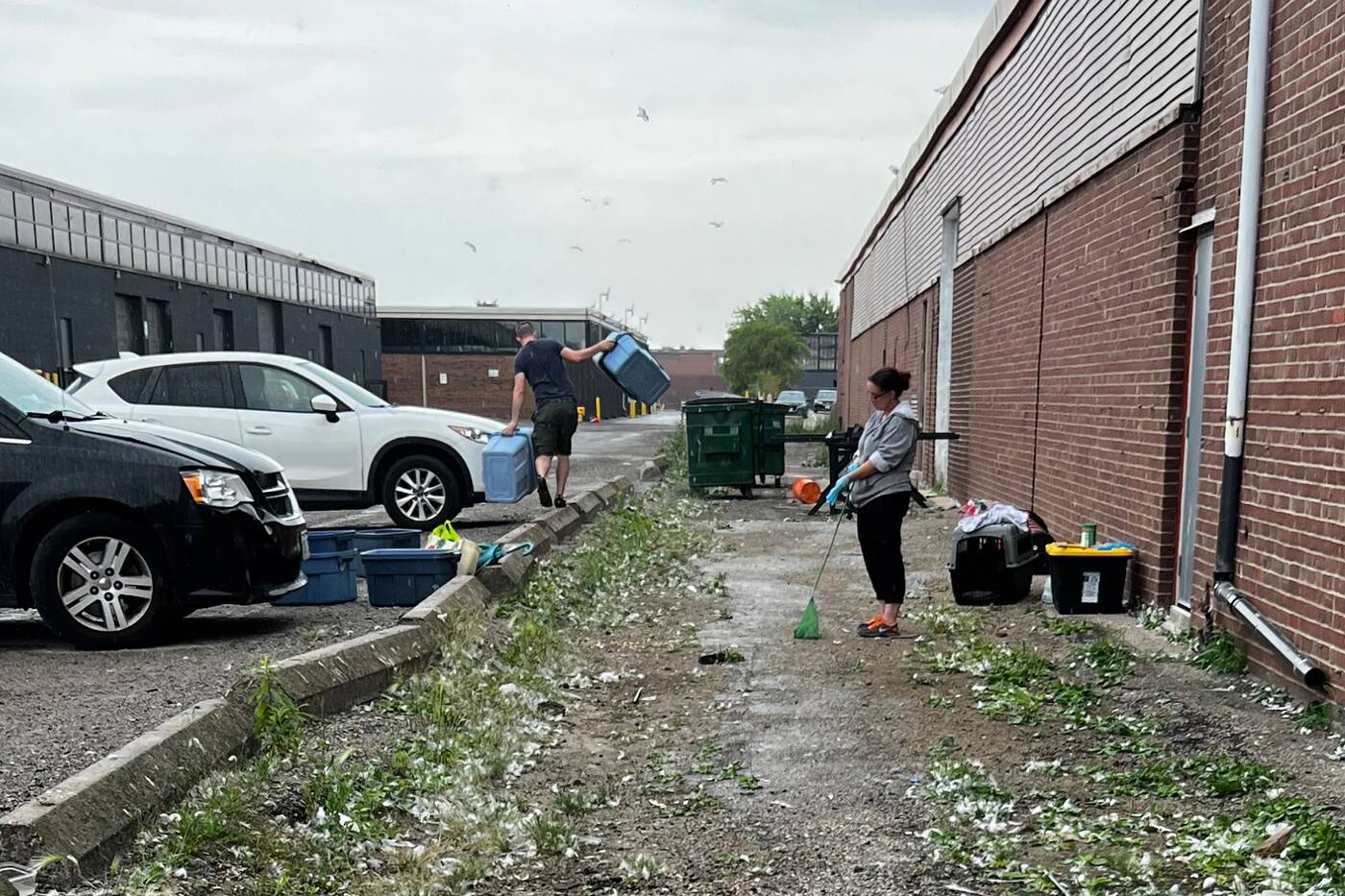 Rescue volunteers rushed to the scene.

Shadia Toderovitz, a Mally's Third Chance rescue volunteer, said there were deceased birds everywhere. The clumps of feathers on the ground and in the air looked like it was snowing in June. "There were babies in every direction. I saw over 100 in the area I was in and I know there were at least another hundred on the other side." 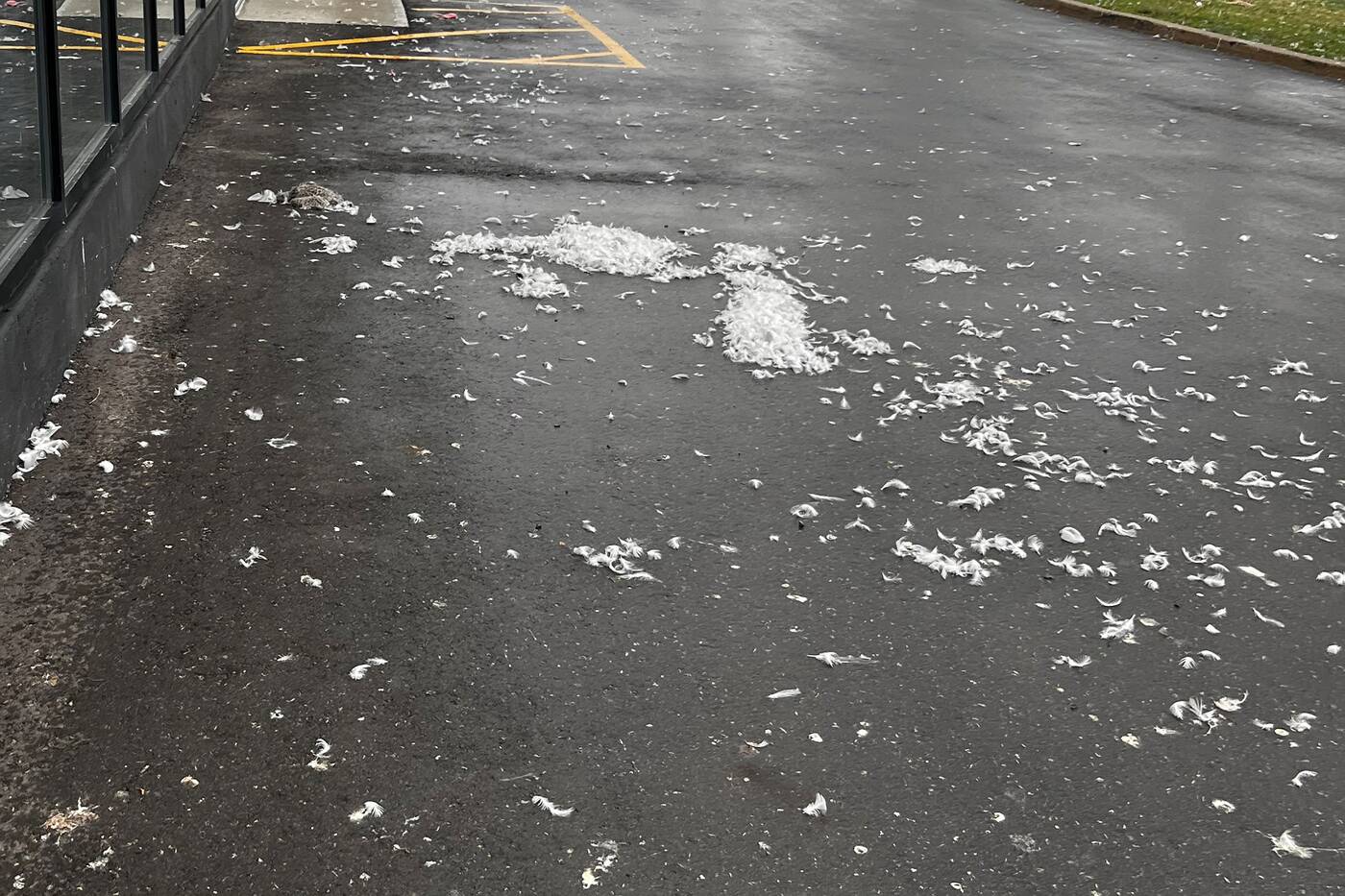 A collection of blowing feathers from hundreds of birds.

Toderovitz said many drivers did not realize the gulls were flightless and incorrectly assumed they would fly away when approached by cars.

Some of the gull chicks had broken legs and injured wings from the fall, and head wounds from being pecked by non-parent adult birds.

Shades of Hope says gulls are generally non-aggressive to each other, but the heat stress and chaos of losing their young may have caused abnormal behaviour. 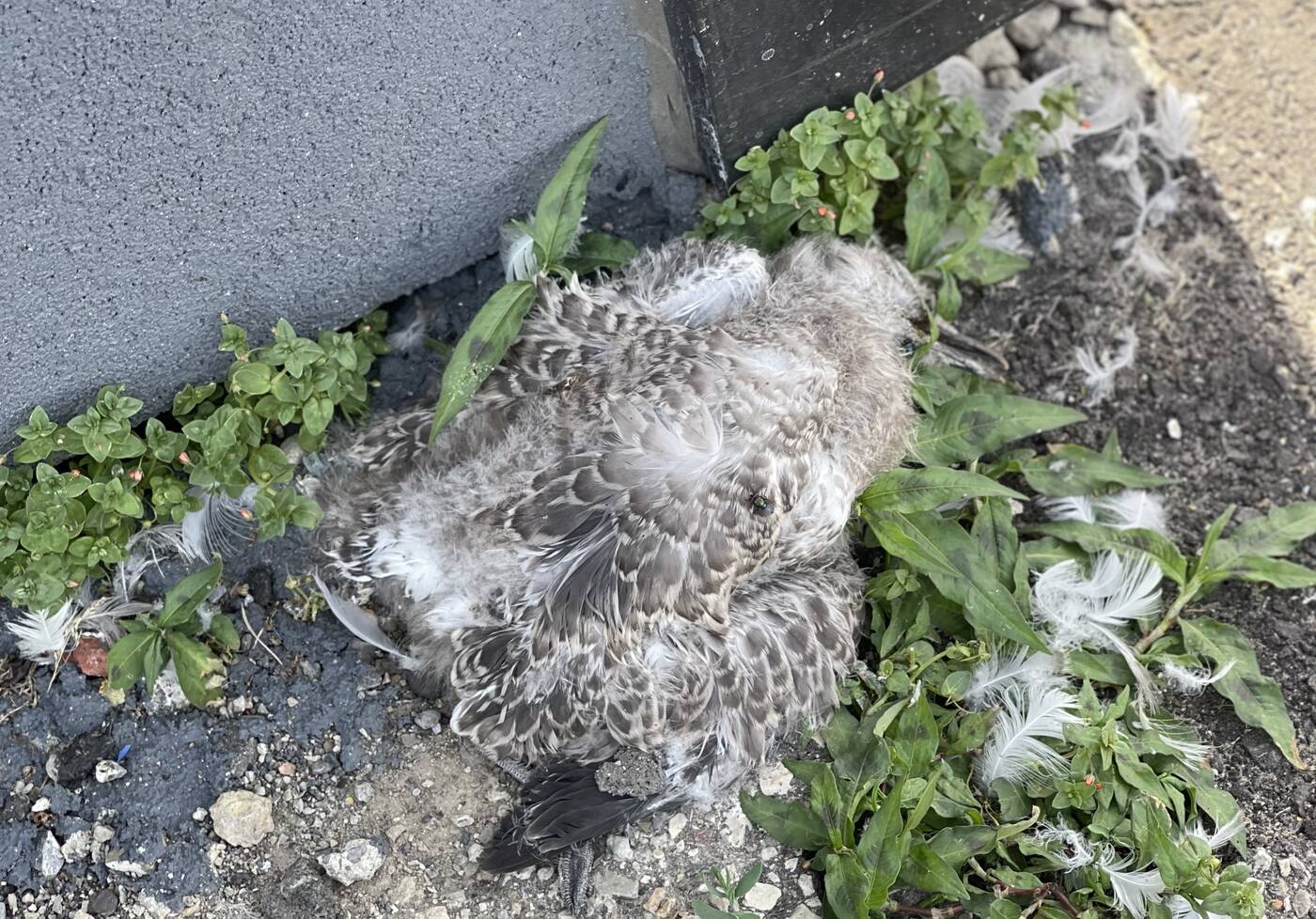 People on the scene reported hundreds of young wildlife casualties.

Gull-mageddon is not a one-time catastrophe. Stockman says this isn't the only location where it happens and can occur on any dark flat-top roof with nesting birds. "It's time people take responsibility for what we are doing to wildlife."

As global warming causes unusually high temperatures earlier in the year and more areas are urbanized, gulls will continue to dwell at the few safe nesting options they have: rooftops.

"We are destroying their habitat and causing them to act unnaturally," Stockman says. "We have a responsibility to mitigate that whenever we can." Possible solutions include whitewashing rooftops to reduce heat absorption or providing shaded areas for the birds during their nesting period. "It's not going to solve the problem, but it will help," she says. 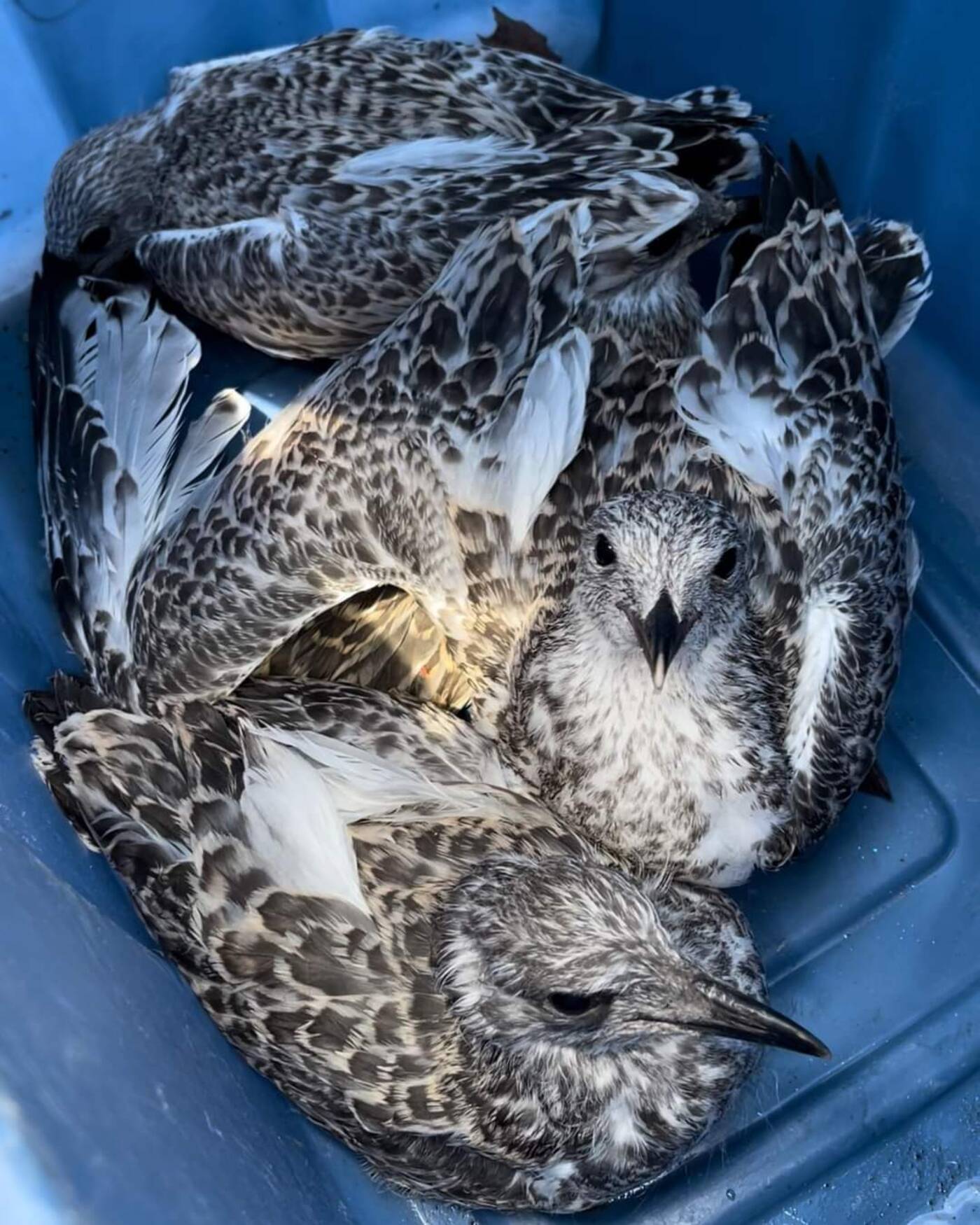 Older gulls who survived the fall.

Thanks to the dedicated volunteers, more than 100 gull chicks were rescued within 24 hours. Eighty fledglings were transported to Shades of Hope Wildlife Refuge and approximately 50 to the Toronto Wildlife Centre.

Shades of Hope will care for the babies until they are fully flighted and waterproof. The organization is a registered charity that is entirely operated through donations and run by volunteers.

Volunteers have posted signs in the area warning drivers to slow down and watch out for the remaining chicks in the parking lot. They are monitoring the area and will provide food and water for the babies as needed. The fledglings should be mature enough to fly within a few weeks. 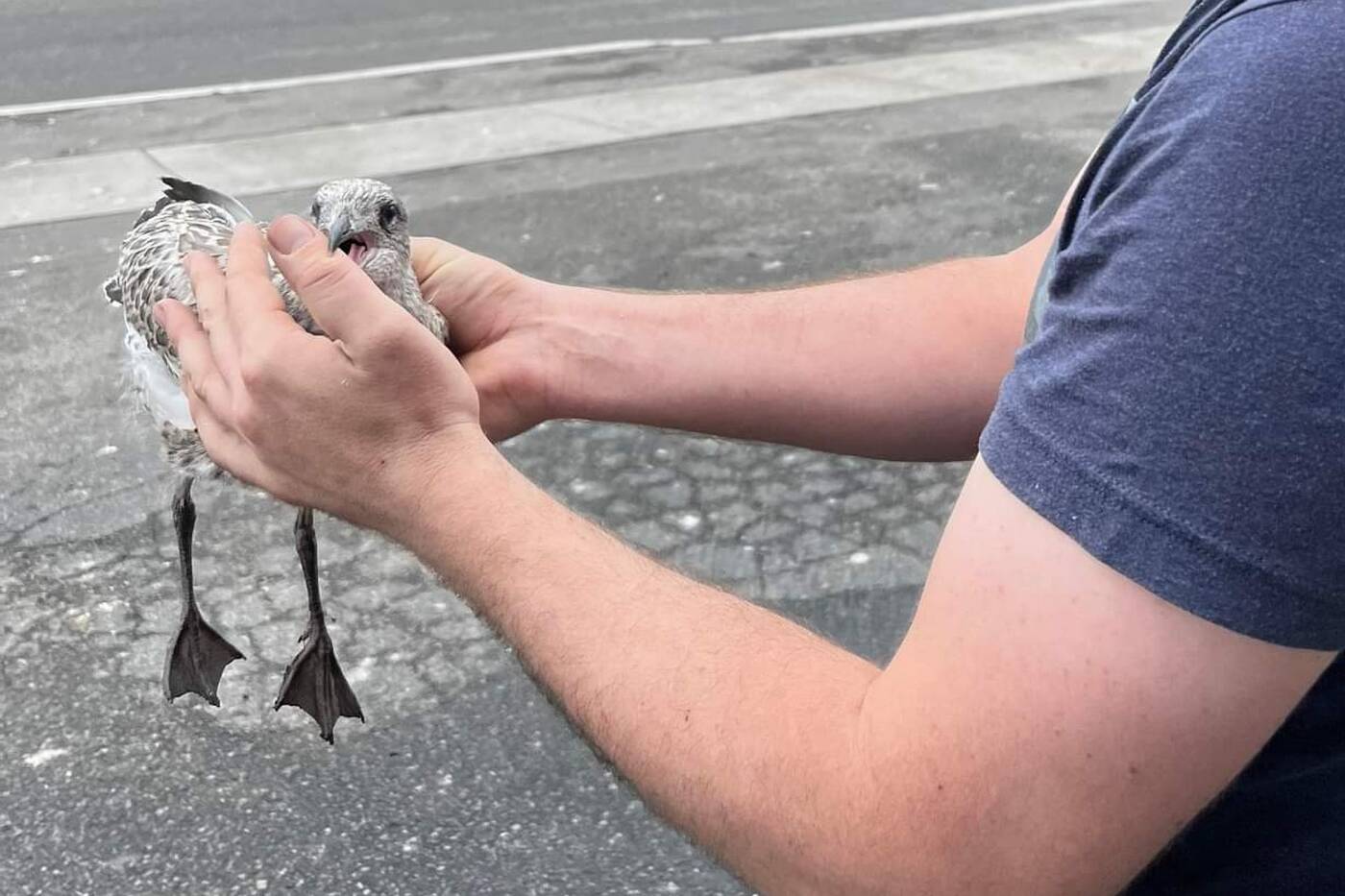 Volunteers acted quickly to save as many gull chicks as they could.

"If anyone sees a bird in the parking lot and is concerned, they should ensure that the bird is in a safe spot – but leave it there," says Nathalie Karvonen, founder of the Toronto Wildlife Centre. She advises finders to call the TWC hotline to assess whether the gulls are in need of help.

"Some birds may be cared for by their parents on the ground, and we would not want to separate the family."

The owners of the storefronts affected by Gull-mageddon have been advised on how to prevent this from happening again.