The amazing history of the Yorkdale Shopping Centre in Toronto

When visiting Yorkdale Shopping Centre today, I find it difficult to realize that it is the same plaza that I experienced when it opened in 1964.

It has been greatly expanded during the past five decades, and though the original sections of the mall survive, they are almost unrecognizable.

The story of Yorkdale is a vital part of the history of retailing in the Toronto area. It was Canada's first indoor mall, an improvement for shoppers that particularly suited the Canadian climate. It allowed people to park, walk inside an enclosed structure, and access shops from its interior.

Yorkdale was built in an era when many suburbanites shopped at "strip malls," constructed to accommodate those living in communities surrounding the city that owned cars.

The first strip mall in the Toronto area was at Bayview and Eglinton. Many such malls still exist today, consisting of shops built in one or more rows, their front doors facing an outdoor parking lot. Customers enter the stores directly from the parking lots.

Strip malls began appearing after the Second World War, when many Torontonians were relocating from the city’s urban core to the suburbs.

They were following a dream of owning larger homes on more generous-size building lots. Some of the houses they left behind in the inner city were purchased or rented by the immigrants arriving in the city.

Relocating to the suburbs was facilitated by the post-war's booming economy, which placed automobile prices within the reach of more and more Canadians.

Vehicle sales skyrocketed, creating the beginning of a "car-dominated society." It allowed people to travel greater distances to shop or attend a movie.

Eaton's was one of the first to realize the potential of meeting the needs of the increasing number of suburbanites.

Prior to the Second World War, the company's department stores were in the downtown core. Aware of the expansion in population in the suburbs, in 1954, for the price $1.4 million, Eaton's bought 100 acres of land located to the northwest of the city. The intent was to erect a large shopping mall on the site.

Eaton's knew that it needed another major retailer to join in the venture. As a result, in 1961, the company offered to sell the Robert Simpson Company one half of the site if it joined in the enterprise.

However, Simpsons wanted only 19 acres, on the west side of the property, and stipulated that the price must include sewage, water connections and roadways. Eaton's agreed and spent $1 million to satisfy the terms of the deal.

The land where Yorkdale was to be erected was cleared and ready for construction by the spring of 1962, the work commencing during the early-summer of that year. 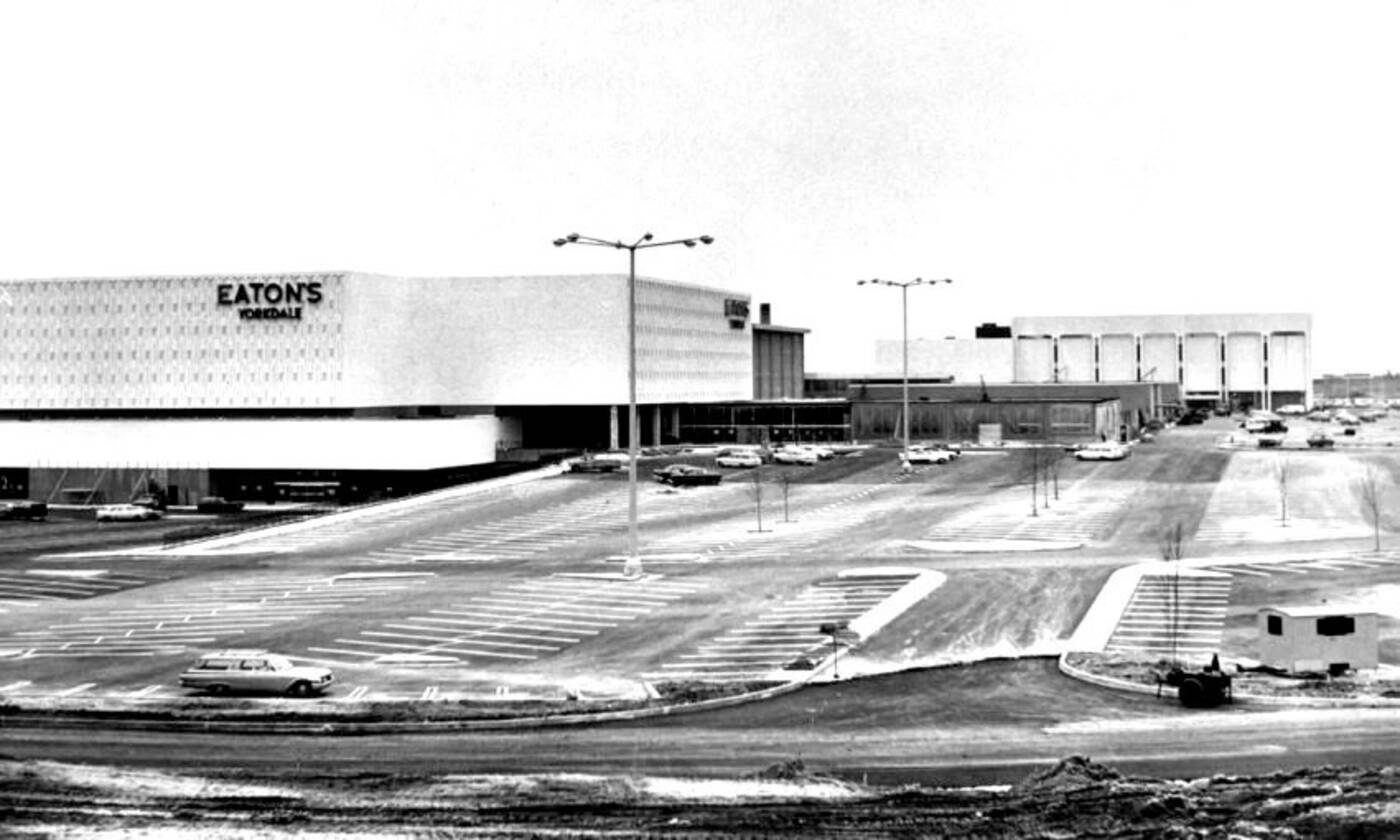 View looking west in March 1964 of Yorkdale, the Eaton’s Store in the foreground and Simpsons in the distance.

Everything was completed by February 1964. As opening day drew near, John David Eaton insisted that the mall close at 5:30 or 6 p.m., similar to its downtown stores.

However, the smaller retailers in the project strongly objected, since they wanted to remain open until 9:30 p.m.. John David finally agreed, after he was assured that employees would not be required to work longer hours than they wanted.

On Sunday, February 16, 1964, long lines of customers gathered at the various entrances to Yorkdale, waiting for the 9:30 a.m. opening. By mid-morning, its four parking lots (6,500 spaces) were completely filled.

At 2:30 p.m., drivers were scouring the lots trying to find a place to park. By the end of the day, the Star newspaper estimated that 100,000 shoppers had crammed into the mall. 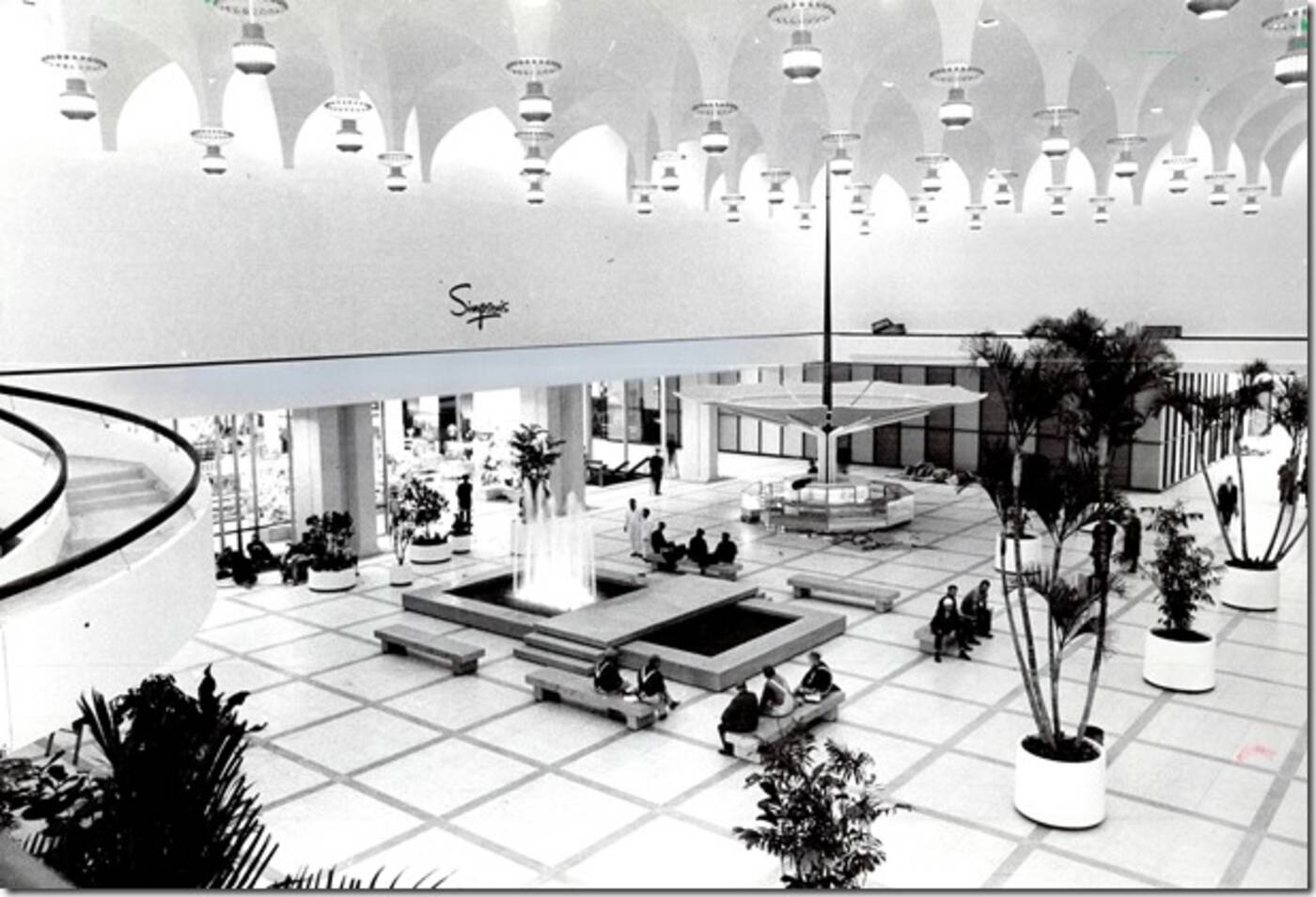 View of the three-storey court on the south side of the Simpsons store. The curved staircase on the left leads to Simpsons Court restaurant. The photo is undated, but it is likely c. 1964. Toronto Public Library, tspa 0014666f.

The Dominion (today their stores are named Metro) was the largest the company had ever built, containing 17 checkout counters.

The week the plaza opened, some of the shops were not yet occupied, but it was still an impressive sight. For a short period of time, Yorkdale was the largest indoor shopping mall in the world. Though its size was impressive, its importance was perhaps due to another factor.

Yorkdale set the pattern for future malls across Canada. It demonstrated the advantages of locating malls near transportation hubs, which allowed shoppers access from nearby arterial roadways.

As well, it showed that if retail enterprises of this size were to be successful, more than one large-scale store was required. Yorkdale actually possessed three—Simpsons on its west side, Eaton's on its east, and a Dominion Store on the south.

It was the first time that Canada's two largest department store chains—Eaton's and Simpsons—were under one roof. This was accomplished, even though they had been competitors across Canada for many decades.

Prior to the opening of Yorkdale, many people living in the suburbs had continued to shop downtown or visited local strip malls. Neither of these options was truly convenient.

When suburbanites drove downtown, even then, parking was becoming a nightmare. Strip malls were also at a disadvantage as they were exposed to the vagaries of the Canadian weather.

The appeal of Yorkdale was obvious. It offered numerous retail outlets that were closer to home than the downtown, were impervious to the weather, and possessed plenteous free parking.

Torontonians were able to drive to the mall to shop indoors, enjoy a meal or snack, and attend a movie theatre, all at one destination.

The configuration of the Yorkdale Plaza was basically an "L-shape." The top of the "L", the bottom, and elbow of the "L" were anchored by one of the large stores.

The corridors that connected the big stores resembled indoor shopping streets, one-third of a mile long, 40 feet wide, the ceiling above them two storeys in height.

The three large retailers had large open spaces in front of them, similar to a courtyard or piazza, which were three-storeys high.

Since the mall was climate controlled, shoppers were able to enjoy strolling along the wide avenue-like areas and courtyards in comfort, immune to the weather outside.

The curtains in the spacious windows, located high above the shops, could be automatically adjusted to allow the proper amount of light to enter the interior of the plaza.

Other pleasing features were the two large fountains as well as numerous 20-foot trees, some of them palm trees.

I vividly remember Coleman's Delicatessen and its delicious corned beef sandwiches, the restaurant located near the Dominion Store.

There was a Smitty's Pancake House, which also served small steaks (the site later became "Obies"). The Encore Noshery was reputed to be the largest restaurant in Canada in a shopping centre.

The beauty parlour, "Ponytails," which catered to the needs of small children, had hobbyhorses instead of regular chairs.

Yorkdale had a cinema with two auditoriums, with combined seating for 1200 patrons. I remember seeing Mel Brook's zany film Blazing Saddles at the Yorkdale Cinema in 1974.

It was an afternoon matinee, attended mostly by seniors. I was one of the few persons in the audience that did not have purple-tinted hair. As a matter of fact, even then, I did not have much hair at all.

As the screening progressed, I discovered that I was also one of the few that was laughing. I admit that the humour was a little off-colour— typically Mel Brooks.

Eaton's and Simpsons both had restaurants. The Simpson's Court restaurant overlooked the cathedral-like interior courtyard with its three-storey ceiling.

I remember visiting it numerous times for lunch, usually ordering the daily special of soup, chicken-pot pie, and a salad.

Eaton's Vista restaurant was on the second floor, at the northwest corner of the store, overlooking the mall where there was a fountain. In the evenings, the Vista featured all-you-can-eat buffet, which included roast beef.

I sometimes visited it on a Friday for dinner. I seem to remember that Eaton's restaurant was later renamed "The Loft," but I cannot find any proof of this. Memory sometimes plays strange tricks.

Though Yorkdale was located quite a distance north of the downtown, it was connected by several arterial roadways—Highway 401, Wilson Avenue, and Dufferin Street.

Market research conducted by Eaton's had shown that the mall was likely to attract shoppers from within a 30-minute drive. This meant that people as far away as Brampton and Whitby could easily drive to Yorkdale, as well as those living north of Bloor Street.

This was a potential market of almost a million shoppers. In 1966, the location became even more advantageous when the interchange at the Allen Expressway and the 401 was completed, and in January 1978, when the mall was connected to the University/Yonge subway line.

The architect of the Yorkdale Mall and the Eaton's Store was John Graham Consultants. The store Graham created for Eaton's had a striking exterior, with off-white bricks containing three-dimensional patterns that accented the vertical elements of the design.

Another added feature of the plaza was the underground truck tunnel that delivered goods to the retail outlets. The gigantic Dominion Store featured an underground conveyor belt that delivered customers' purchases to a station in the south-west parking lot, where they could pick up their groceries. 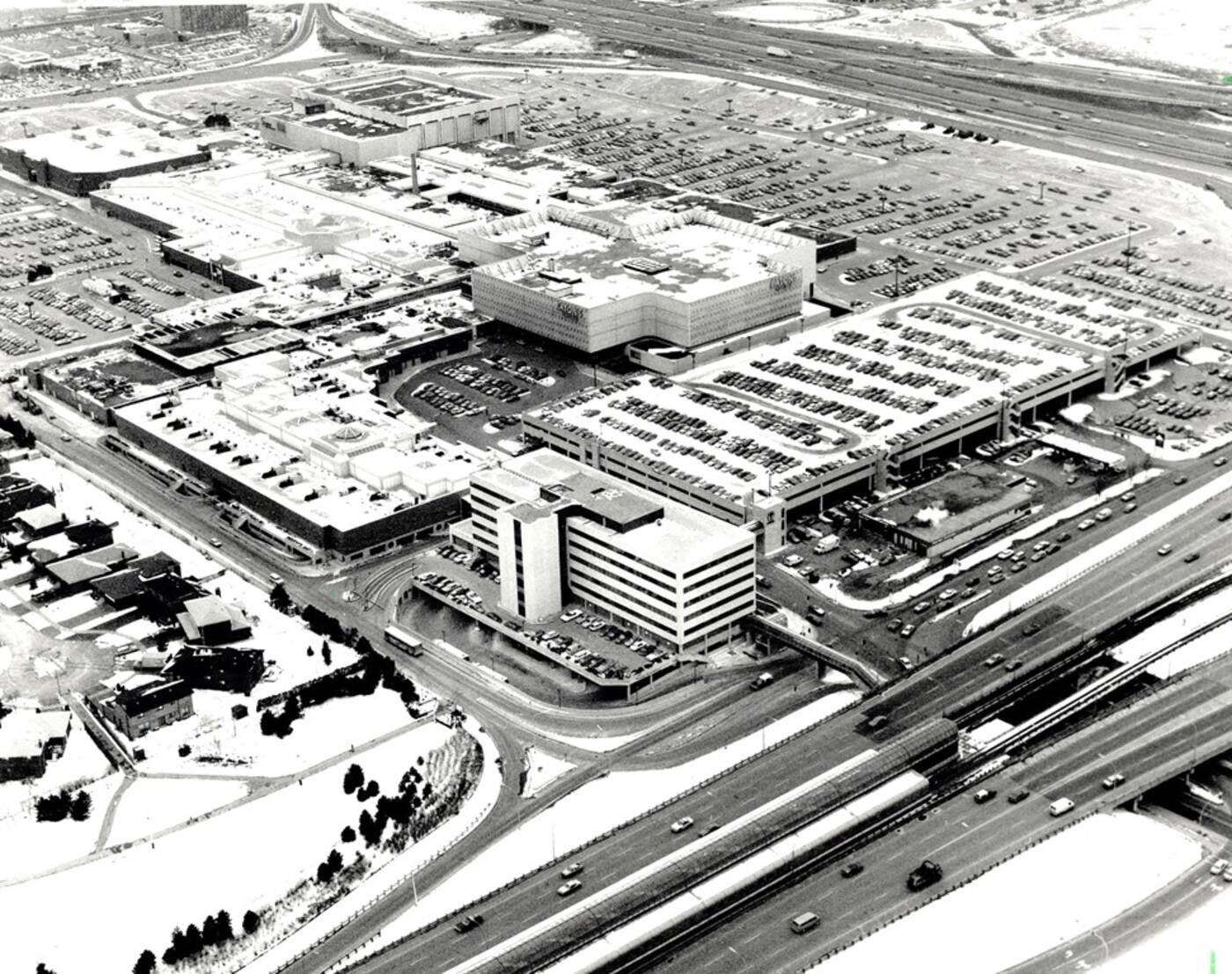 Aerial view of Yorkdale in 1989, looking toward the the northwest. The Eaton’s and Simpsons stores are visible, as well as the 1984 extension added to the plaza. Toronto Public Library, tspa 0014664.

John B. Parkin Associates were hired to design the Simpsons store, the architect within the firm who was assigned the work being John Andrews, a Harvard-educated Australian.

During the years ahead, Andrews opened his own firm and won the contracts for the University of Toronto's Scarborough Campus and the CN Tower.

I recall attending Boxing Day sales at Yorkdale during the 1970s; I visited early in the morning to avoid the enormous crowds, even though compared to today, they were considerably smaller.

Yorkdale was where I first experienced the frustration of losing my automobile in a parking lot. I soon learned to memorize the row or section number where it was located.

During the 1980s, I visited the mall to attend the Yorkdale Antique Market. It was usually held each February and continued consecutively for three or four years.

It was a large display, which fully occupied all of the "L"-shaped space. The mall also held fashion and automobile shows.

On frigid winter days, for exercise, I drove to the mall in the early morning to walk within the enclosed area. When the shops opened, I enjoyed a coffee and then drove home. 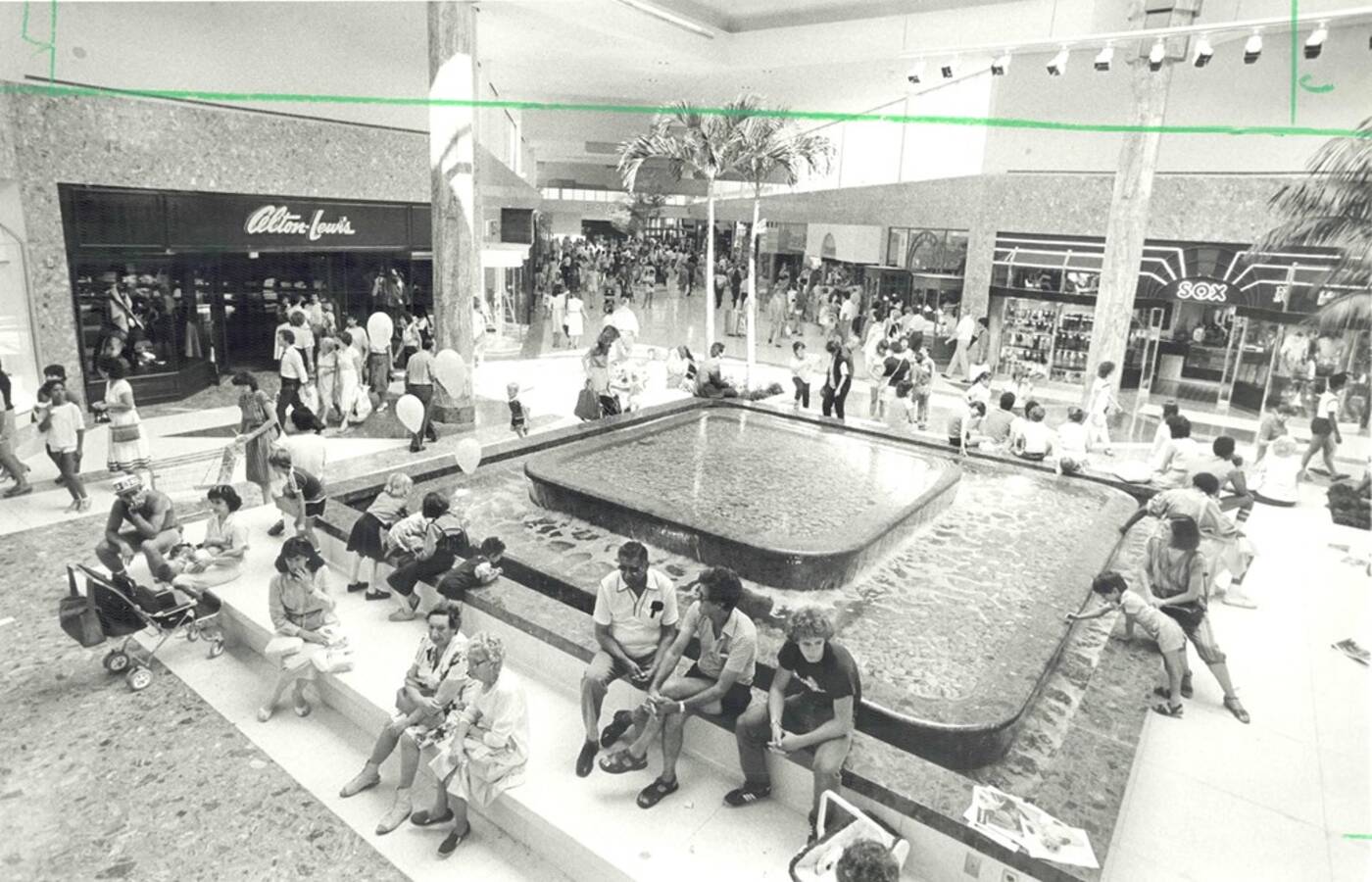 In 1991, Sears Department store opened in the plaza. In 1999, the Rainforest Cafe began serving food in a tropical atmosphere (it closed in 2014).

In 2012, an addition was erected on the southwest side of Yorkdale. It included a relocated and expanded Holt Renfrew Store, situated where the Dominion store had been.

In 2015, the Sears Store on the west side of the plaza was demolished and replaced with the 70,000 square-foot Restoration Hardware, which opened in 2017. It resembled an impressive mansion with indoor and outdoor shops, a courtyard cafe and rooftop conservatory/park.

In 2016, another section was built on the east side, with a Nordtrom Department Store, Uniqlo, as well as 30 more retailers. 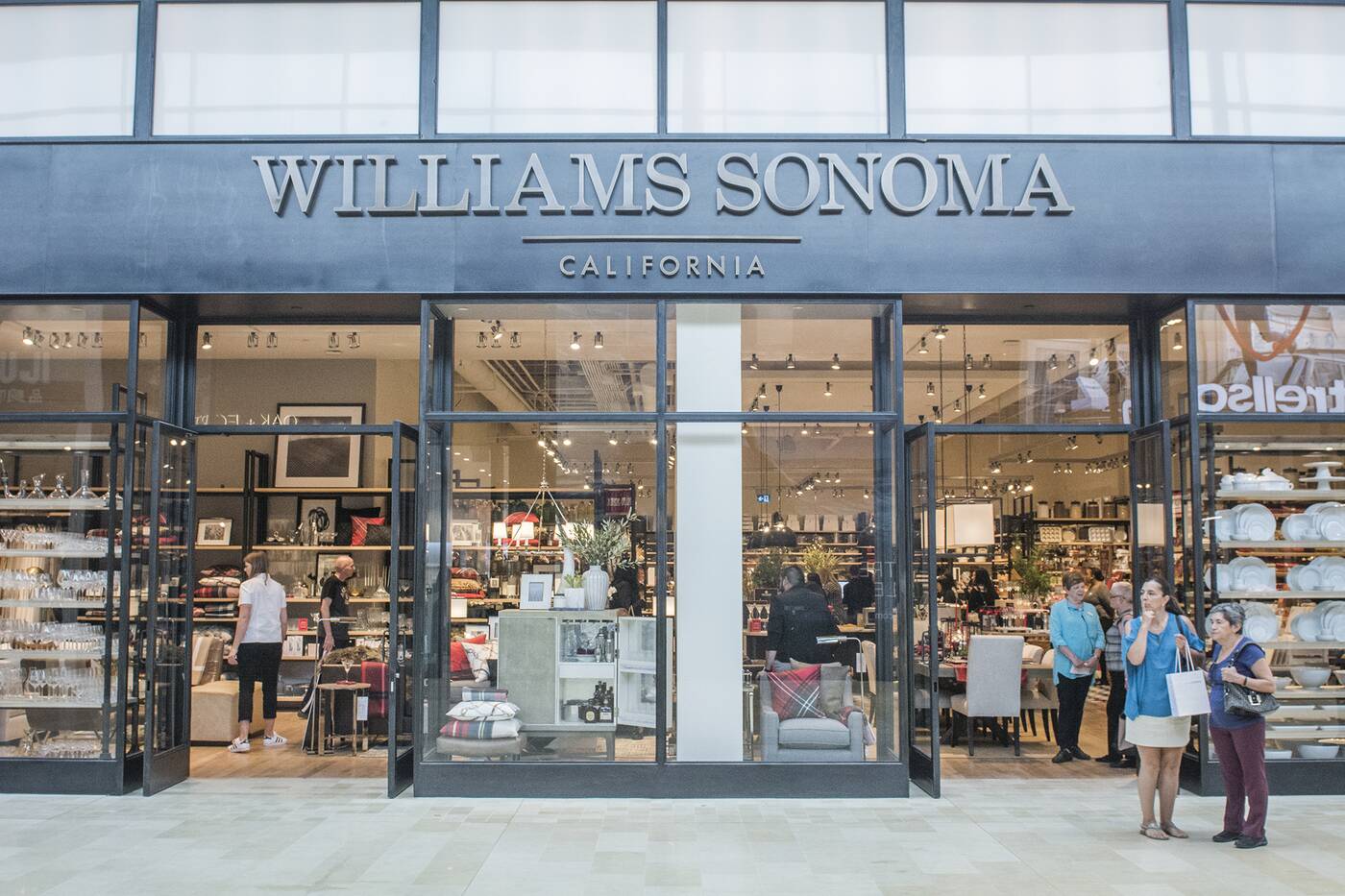 Williams Sonoma was one of the shops that opened during the 2016 expansion. Photo by Hector Vasquez.

In 2017, the The Cheesecake Factory restaurant commenced operation. More expansions have continued since.

Visiting Yorkdale in recent times, I lament the loss of the fountains and the large trees, particularly the palm trees. However, I thought that the massive skylights in the ceilings of the new sections were amazing.

Creative in design, they allow plenteous daylight to enter the interior walking areas. In some instances, I felt I was strolling up the nave of a great cathedral.

Doug Taylor was a teacher, historian, author and artist who wrote extensively about Toronto history on tayloronhistory.com. This article first appeared on his site on February 21, 2018 and has been republished here with the permission of his estate. The article has been modified slightly.