Though people may these days anticipate the antics of porch pirates, who are known to steal packages from Toronto's front porches, it seems that petty thieves in the city have started to move on to other, arguably less interesting but more accessible goods.

Residents have been complaining in community Facebook groups of people stealing plants, solar lights and other items from their yards lately in what seems to be some sort emerging trend.

As with package stealers, some people have been sharing doorcam footage of these bizarre incidents, and others have chimed in to say that the same has happened to them, too.

One woman from the Christie Pitts area shared a video on neighbourhood social network NextDoor that showed two individuals strategically snipping and taking a bunch of her flowers in the middle of the night. 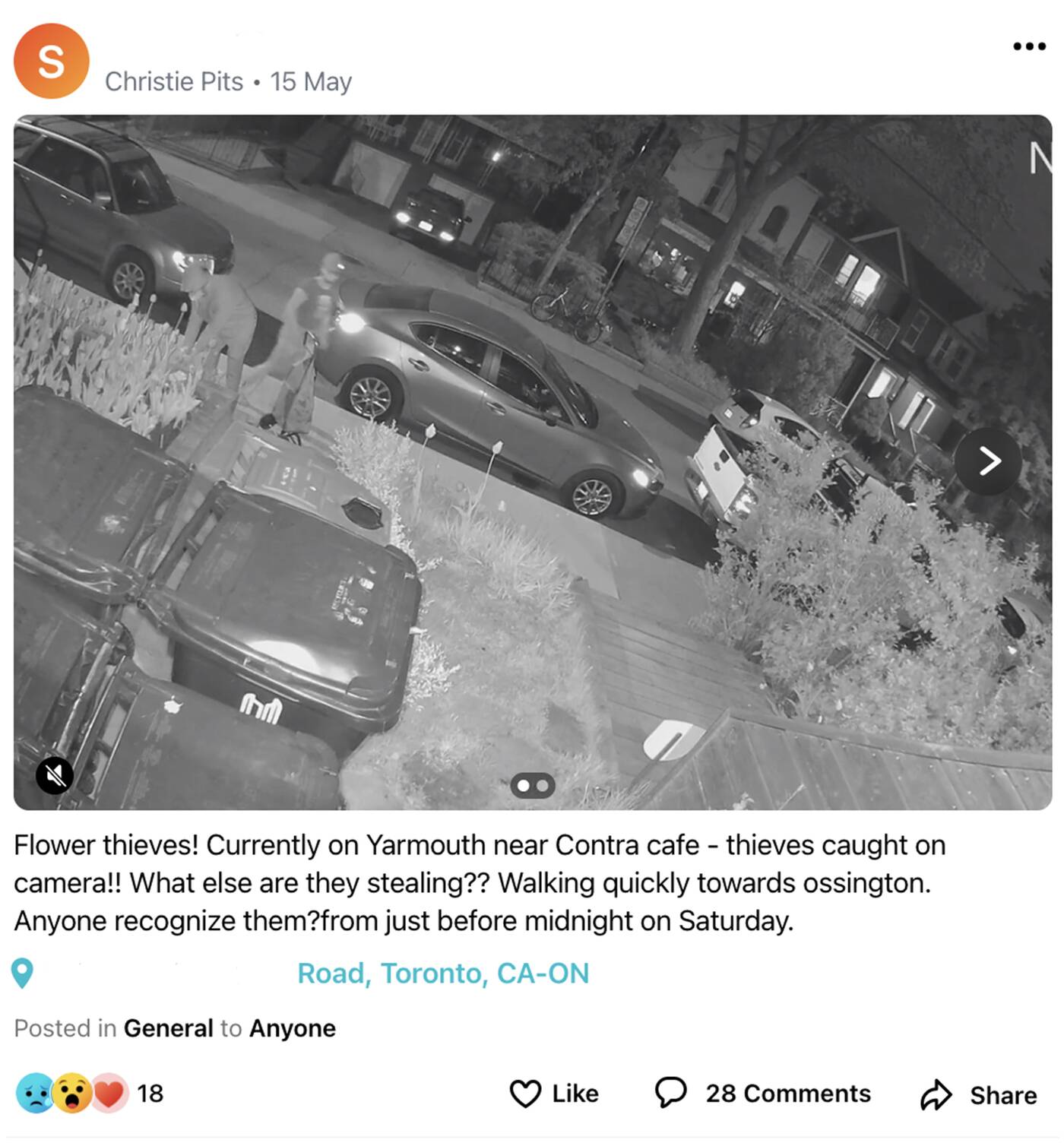 "What else are they stealing?," she wondered in the caption as others told their own stories of plants being dug up from gardens, blooms being cut, potted plants being swiped off porches and fruit and vegetables being pilfered from the vine.

One person in the comments section seems to have been hit endlessly, even having a ladder go missing: "Someone tried to create a graft on my apricot tree, which didn't fruit for the next 3 years. I find people in the garden with bowls picking berries, they snap the flowers off the zucchini plants. They have picked the beans off the castor plants, picked whole mature sunflowers, and uprooted day lilies planted outside the fence."

Another said that even their doormat was stolen once, for whatever reason, while still another made their own post about being "hit several times," their olive and lime trees now gone. "They must have over a dozen of my plants stolen through out the years," they wrote. 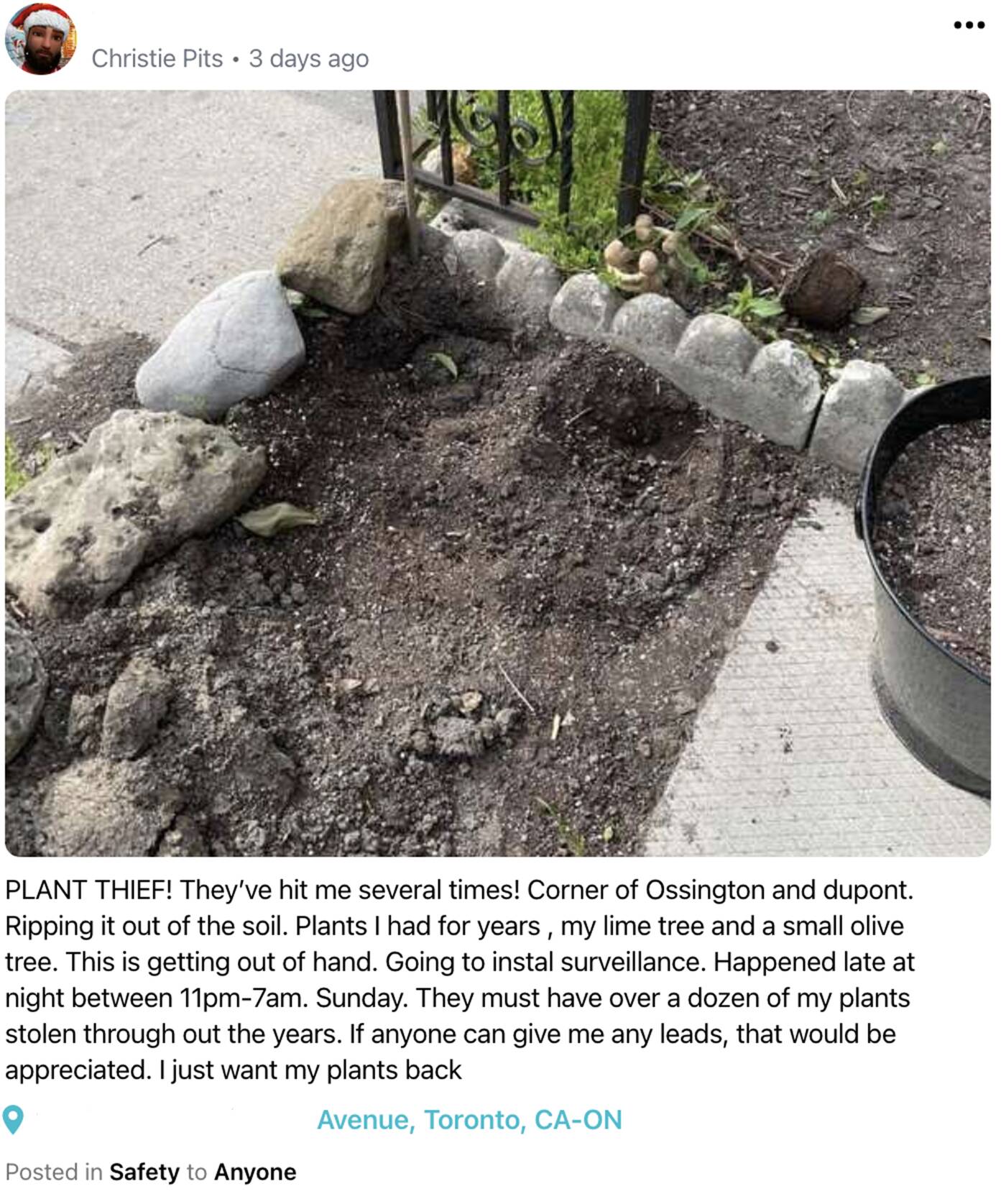 Another NextDoor post on the same topic from a person who has been hit multiple times by plant thieves.

Hundreds in the city can apparently relate, according to a recent Reddit thread on the same topic that got 1,472 upvotes and 239 comments and counting,

Even a local not-for-profit children's learning center was targeted, with an educator posting this week that someone had stolen a slew of tree stumps the institution had just been donated for its garden.

"Our students were beyond thrilled and excited for the little 'fairy chairs' we added to our new garden! They spent hours sitting, reading, playing, climbing and cherishing the new tree stumps," Kelly Farrell wrote in the South Etobicoke Community Group this week.

"Unfortunately, I discovered that five of our tree stumps have been stolen... I encourage whoever stole them to please cherish them with the love of dozens of children, with their hundreds of tears that will fall tomorrow when they discover the missing tree stumps." 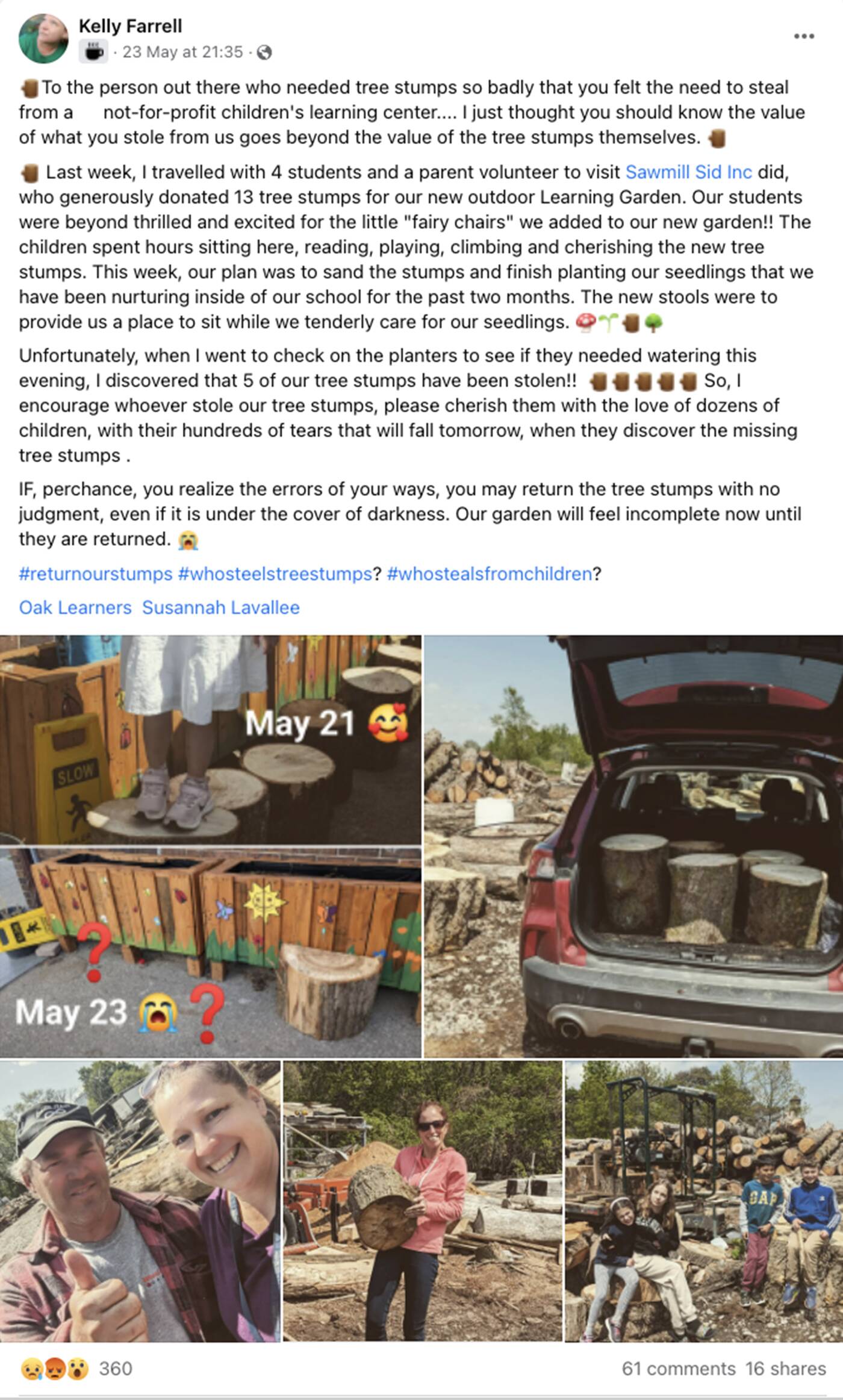 Someone even stole some stumps from the private property of a not-for-profit children's learning centre this week.

Thankfully in this latter case, the neighbourhood stepped up in support to make up for the harm that was done: "The real story comes from the number of people who have reached out to help — there's still more good than bad in our world," Farrell tells blogTO.

Meanwhile, residents with gardens or anything of value in their yards should apparently keep an extra close eye out for plant-stealing jerks this summer.