A Toronto resident is frustrated, furious and frankly quite shocked after being robbed in broad daylight by an unlikely porch pirate wearing high-end workout clothes.

Clarisse Mussi says she was putting her young daughters to bed yesterday when she heard a knock at the door indicating that a package had arrived.

By the time her kids were snug and sound, only 30 minutes later, the package had disappeared.

Upon checking her Nest cam, Mussi was disappointed to see that a pair of new boots she'd ordered for her 4-year-old, who starts JK this September, had indeed been dropped off in front of her Leslieville home by a delivery person — only to be snatched from the porch minutes later by a total stranger.

"Unfortunately we are seeing a huge rise in stolen packages which is why I checked Nest," she told blogTO on Wednesday. "This woman was so brazen she even took the time to re-apply her lipstick."

The victim of this porch pirate was stunned to see footage of the thief reapplying lipstick right after stealing a pair of children's boots - 📹 Clarisse Mussi #Toronto #Leslieville #PorchPirate pic.twitter.com/6DOKQw4dYd

Mussi shared a clip from the video in a local community Facebook group, noting that the incident took place near the intersection of Queen Street East and Booth Avenue.

In the clip, we see a fit-looking young woman carrying a brand-name gym bag casually walking up onto the porch, picking up the package and walking away.

As she is leaving, the woman stops and puts down her bags in front of Mussi's house — still in clear view of the surveillance camera — to rearrange some things before moving along. A man can be seen watching her from across the street.

"I was shocked to see her boyfriend or accomplice across the street with two packages under his arm. You can see from the video footage she has bags inside of bags so obviously this is a professional who came prepared," says Mussi.

"It's exhausting. I've had packages stolen from small businesses who can't afford to replace stolen packages which means I'm out of my pocket." 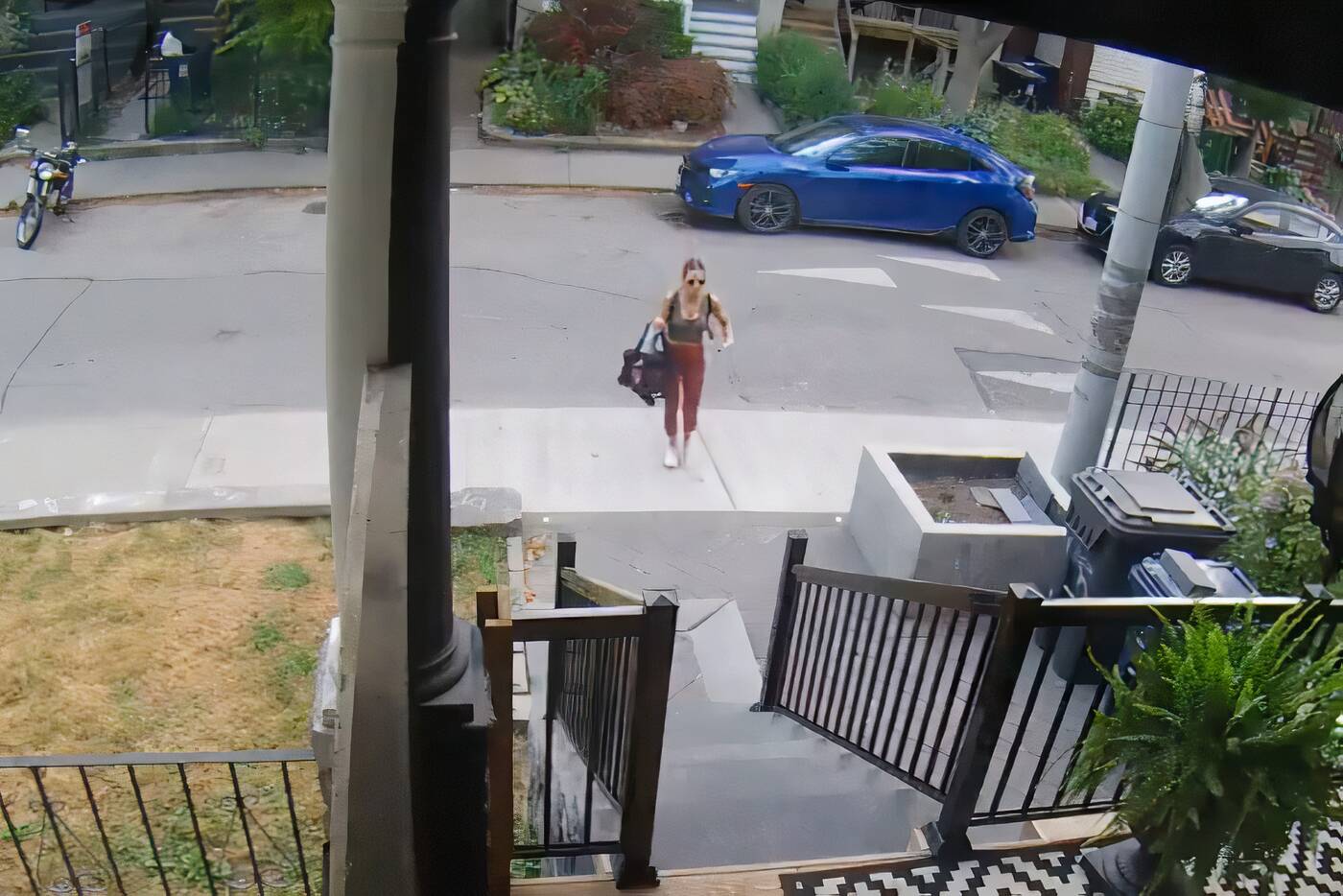 While there's no typical description for all porch pirates, the victim of this woman's thieving was surprised by her nice clothes, shoes, accessories and gym bag. Image via Clarisse Mussi.

Mussi is mad that these brazen robberies keep happening to people in her neighbourhood, but not optimistic that anything will change without proper intervention.

When she called the Toronto Police Service to report the theft, she was told "there's nothing they can do" as it's considered theft under $5,000. Mussi says police advised her to contact the retailer to replace the item.

"I feel frustrated that the police don't care, that there are no repercussion to these thieves so there's no stopping them," she says. "I even got a special box to prevent this from happening, but one of these pirates broke into it."

As for the mysterious fitness lady who took the box and then stopped for more than a minute outside Mussi's house to fiddle with her things and, yes, reapply some sort of lip product before moving on, the single mom has a message:

"I want this woman to know she stole from a 4-year-old. And that this isn't a 'victimless' crime. It hurts small business and the people you steal from."