Ontario Premier Doug Ford's efforts to get more of the population inoculated against COVID-19 are being in many ways delegitimized in the eyes of the public by one single individual who should need little convincing: his own daughter.

Self-described Jesus lover, police wife and former Lingerie Football League player Krista Ford Haynes apparently refuses to give up her anti-vax/anti-mask stance or, more importantly, to stop preaching about it on social media despite her father's position and sentiments on the highly politicized issue.

The 30-year-old has many times now posted anti-vax rhetoric to her private Instagram, suggesting in various IG stories that the jab is not safe and can infect you with COVID-19.

She has also taken to her 16.3k-follower-platform to caution people against an impending "new world order," publicly stating last month that the Canadian government "does not want to release any of their research" on the virus and questioning case and death numbers.

"If only we didn't cover our faces, we wouldn't be here today. But we are so compliant with what the government says... and we all know that while we are bitching about this, something bigger is going on in the background," she said at the time

"It's not going to be two doses and done, it's going to be boosters for life, and every booster that you take is going to weaken your natural immunity to fight off the viruses. Just stop, stop complying."

This week, the younger Ford is at it again, with screen captures of her controversial IG stories from Thursday morning now being shared widely across Twitter and other platforms.

This is literally from @fordnation’s daughter. If you can’t convince your own child on the importance of getting vaccinated, why are you leading us through a global pandemic? https://t.co/LdmTf2QvLh

"I find a lot of people are mixing up being vaxxd or not to how they can hold the line. It has nothing to do with having taken it. It's about rising up and stepping to the plate to keep that information private and respecting those who wish not to take it against their will," Krista wrote overtop a nature photo.

"Holding the line for medical freedom, which [sic] at the end of the day, if we lose our bodily autonomy, the government completely owns us. We are undoubtedly slaves to the system."

She continues on to say that the COVID-19 shot "isn't just another eniccav," using the backwords version of the word, as has become popular among anti-vaxxers wanting to spread their views on socials without being flagged for vaccination subject matter.

Important and serious question - how much influence have family members (like this) been on #DougFord's decision making? Example - the Jan 17th deadline to start lifting vaccine mandates, have given all the deniers/anti-vaxxers like Doug's daughter an out!! #onpoli

Later in the morning, she went on to post a number of links to news stories with comment to express her opposition to vaccine mandates, which is typical for her activity on the platform.

"Dear Ontario, invest in better health officials that respect medical freedom and haven't sat on the Fizer [sic] advisory board," she wrote in an Instagram story, linking to an article about the new Surgeon Governor General of Florida condemning vax passports.

"Booster time," she wrote with a tongue out emoji overtop of a link to a reel showing conflicting headlines re: the efficacy of mRNA vaccines over time. 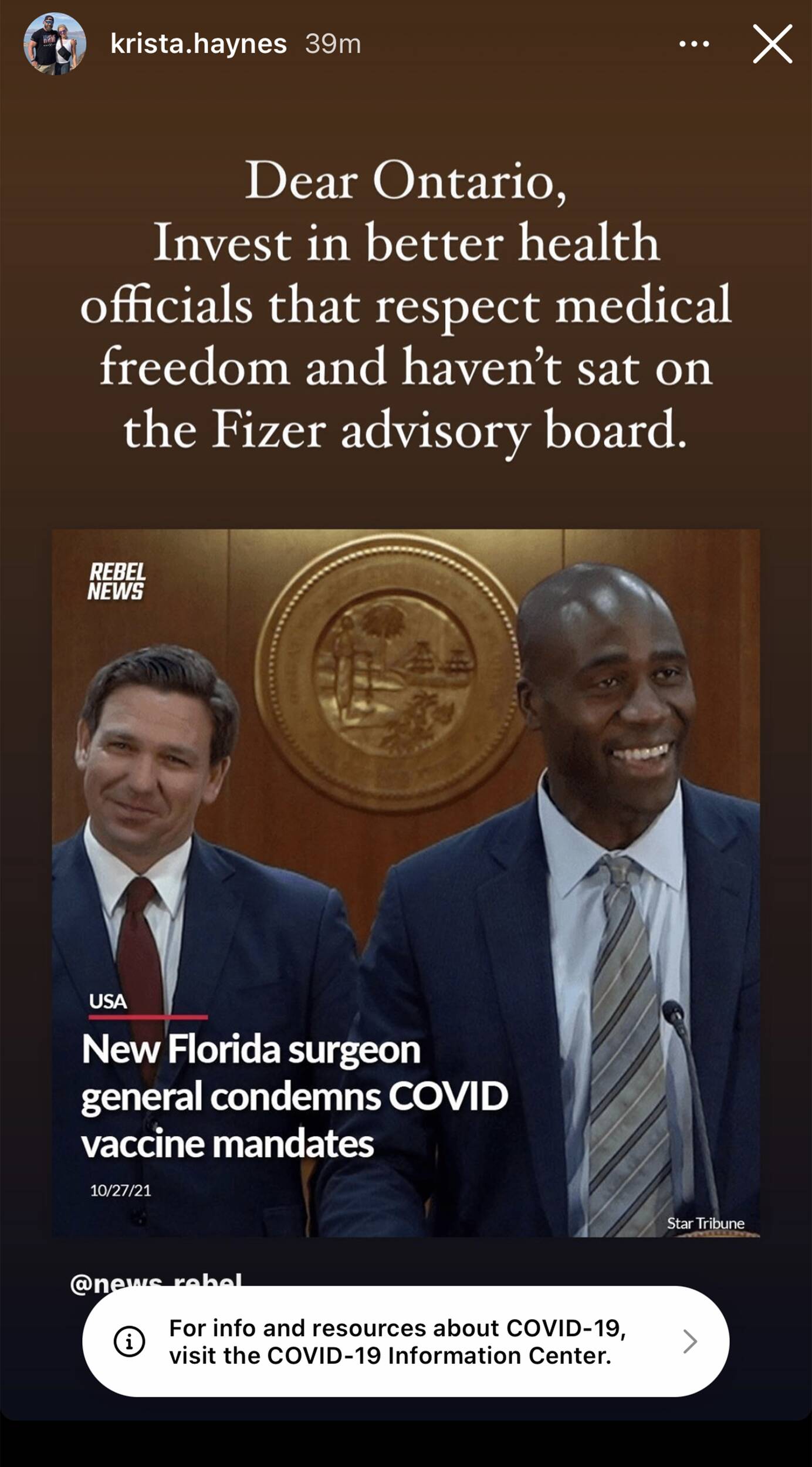 Another of Krista Ford's Instagram stories from Thursday morning.

While Krista has certainly garnered much support from the anti-vax crowd, many individuals are questioning the Premier's true opinions on vaccines given her posts, and are wondering how the views of those closest to him may be impacting his policy decisions.