The roars of jet engines merged with the destruction of the Gardiner Expressway's Logan Avenue ramps to create a cacophony along the Toronto waterfront over the long weekend.

When the screeching aerobatic displays wrapped up, the sounds of concrete breaking and steel being torn away from the easternmost portion of the elevated highway took centre stage.

The Logan ramps closed for good on Tuesday, August 31 at 9 p.m., part of the city's Gardiner Expressway & Lake Shore Boulevard East Reconfiguration project. After a few days of prep work, things kicked into high gear this weekend with the first structural demolition activity. 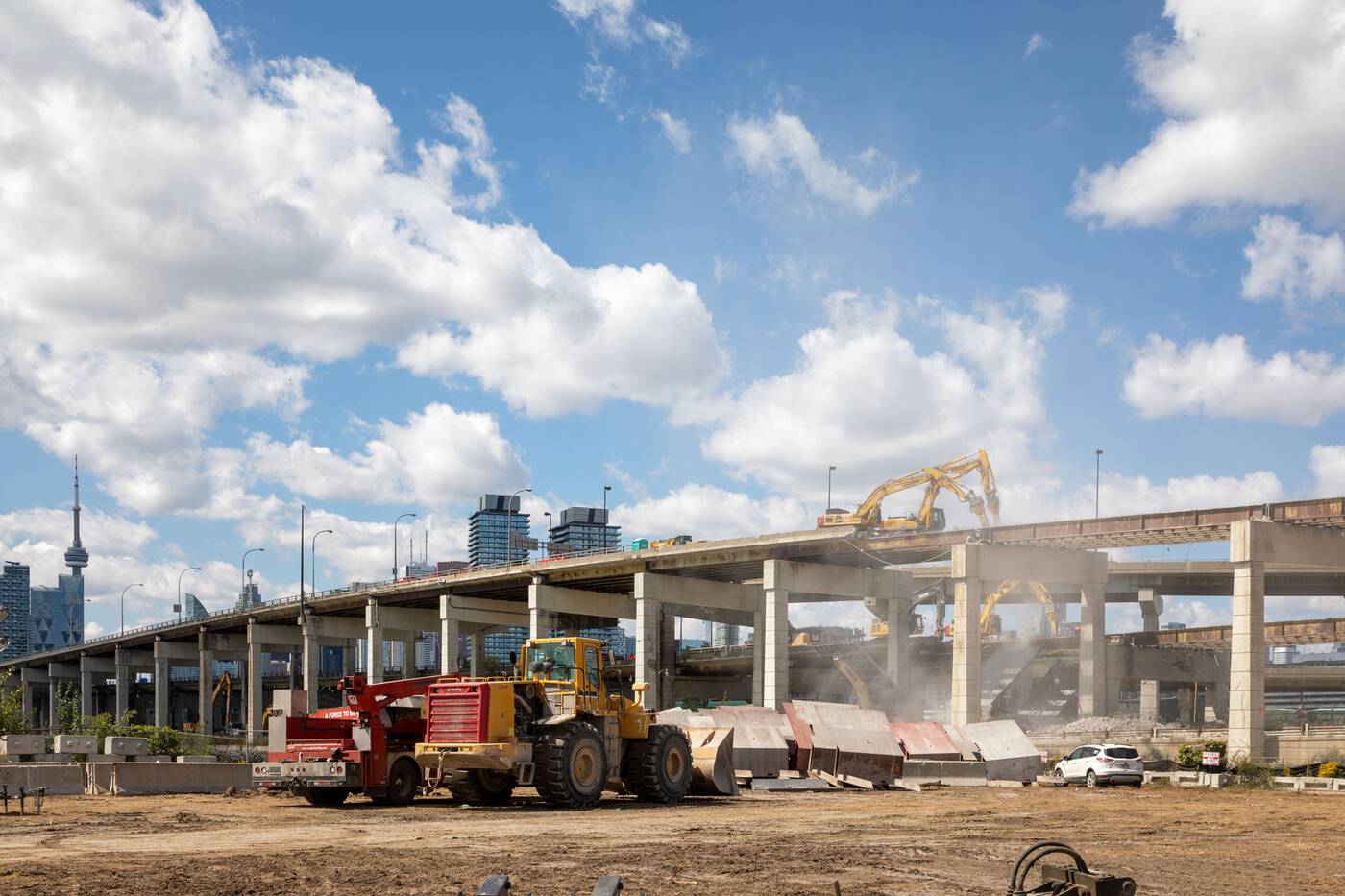 The closure has brought a flood of complaints from motorists, pedestrians, and cyclists. Now, noise has entered the equation. A lot of noise. 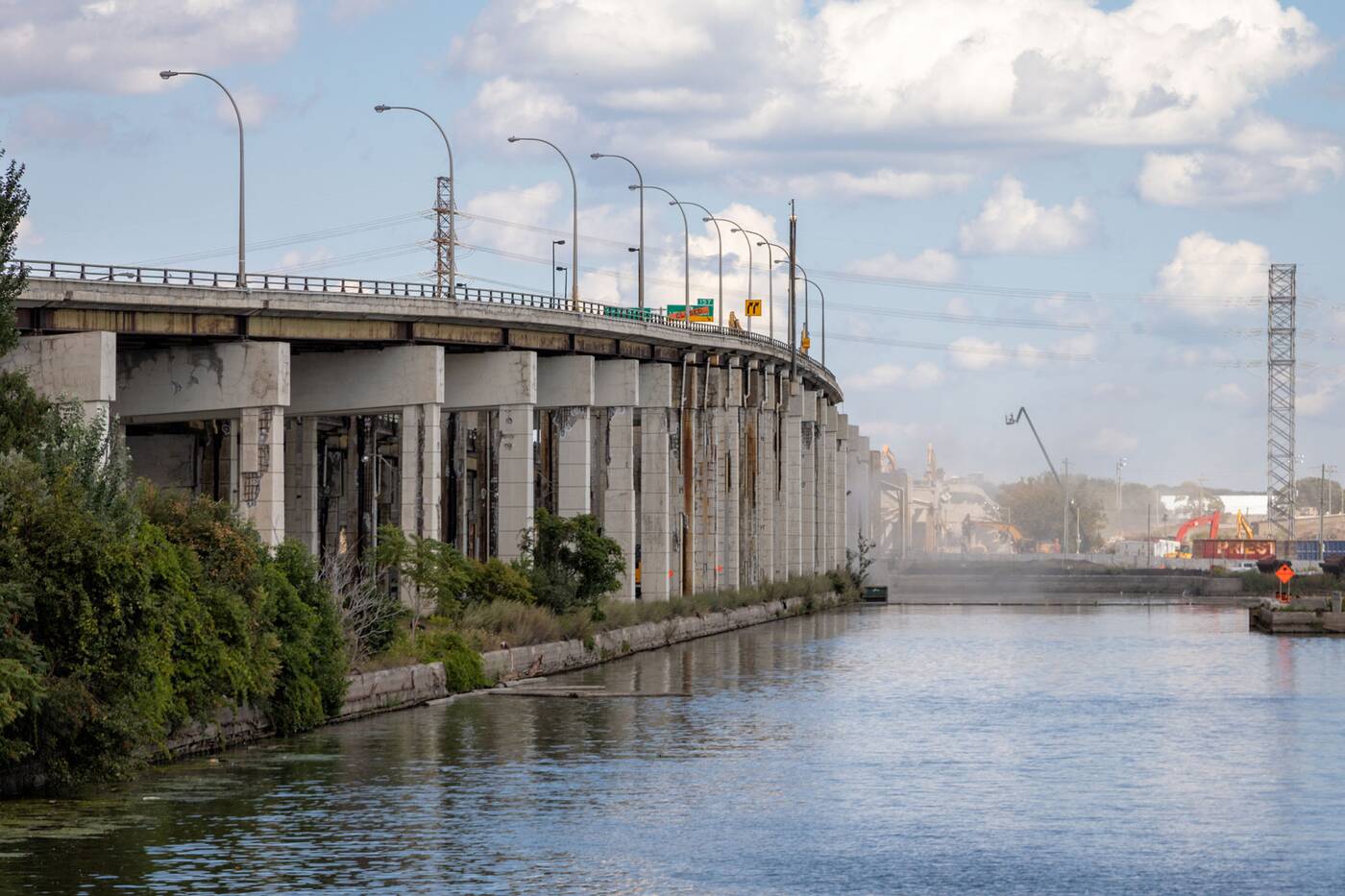 Looking east across the Keating Channel toward demolition activity.

Since the closure, the demolition site has been cordoned off with road closures staffed by police, ensuring that no cars or pedestrians venture into the danger zone. 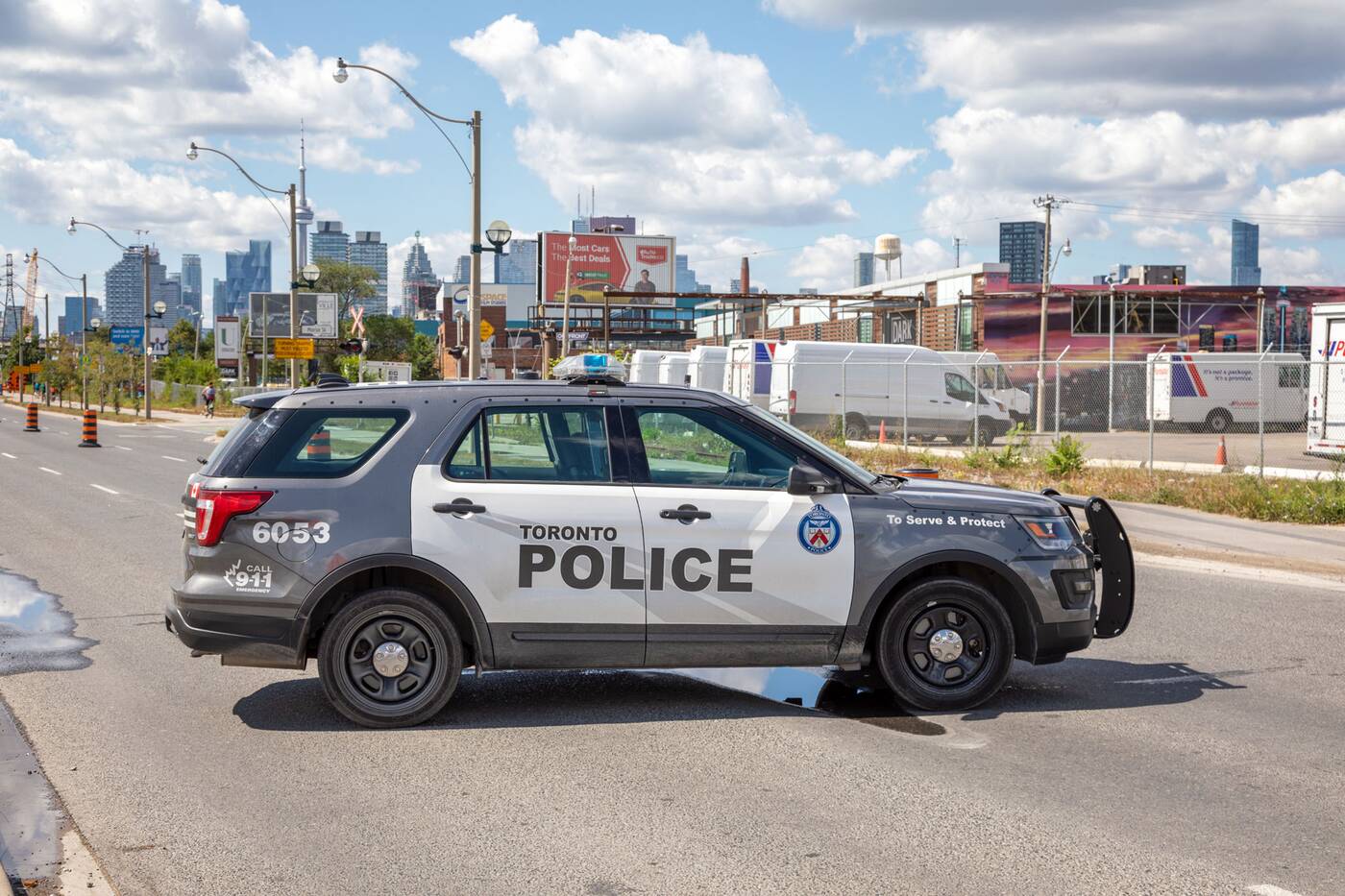 Car access was limited, though pedestrians and cyclists seeking a closer look at a moment in Toronto history were met with a noisy, dusty scene this weekend. By Sunday afternoon, visible progress was being made, creating some once-in-a-lifetime photo opportunities for those willing to make the trek. 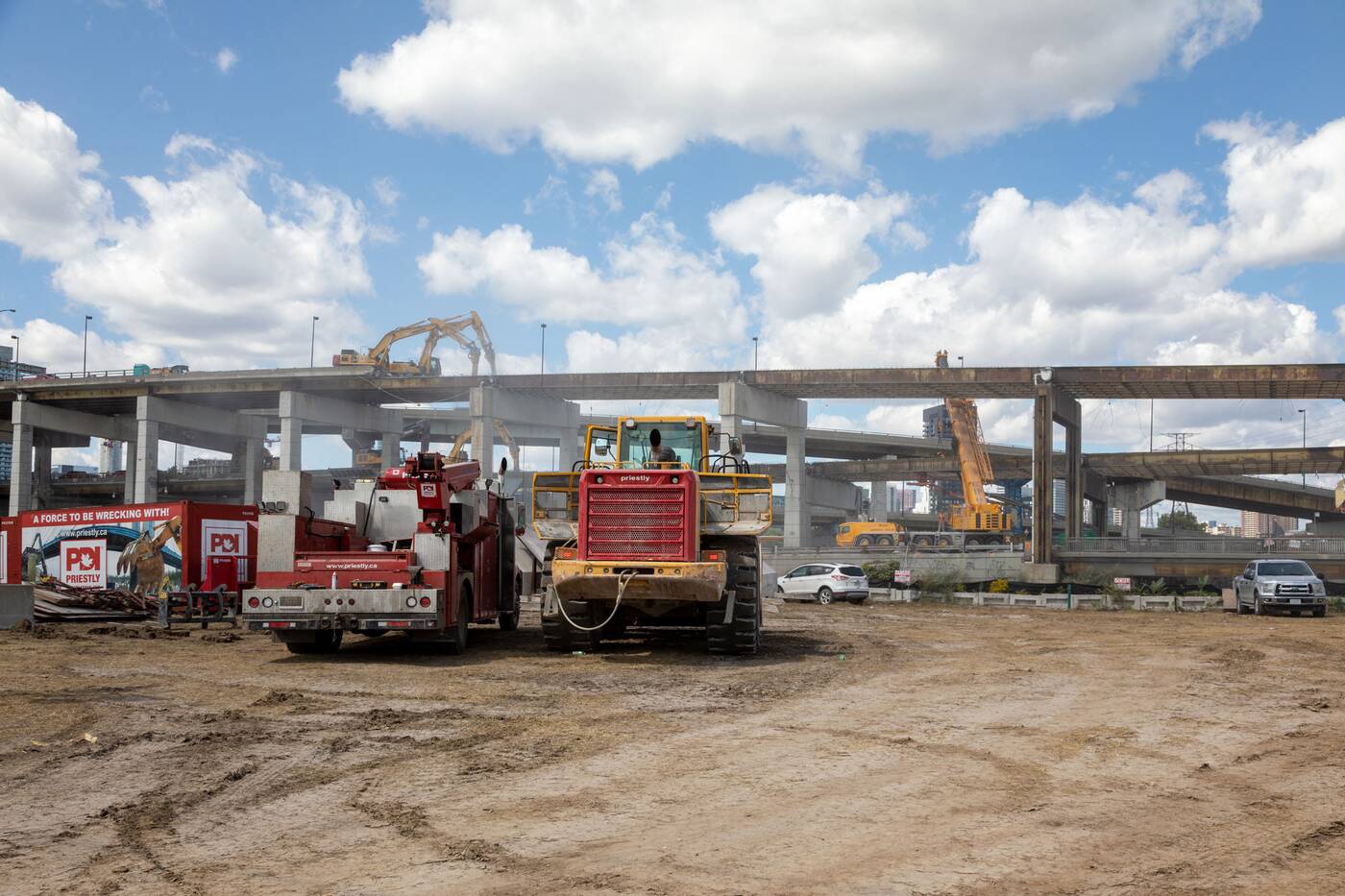 The expressway's final eastern ramp down to Lake Shore Boulevard was just starting demolition at that time; its centre median ripped away, leaving just a roadbed for crews to access the work areas to the west. 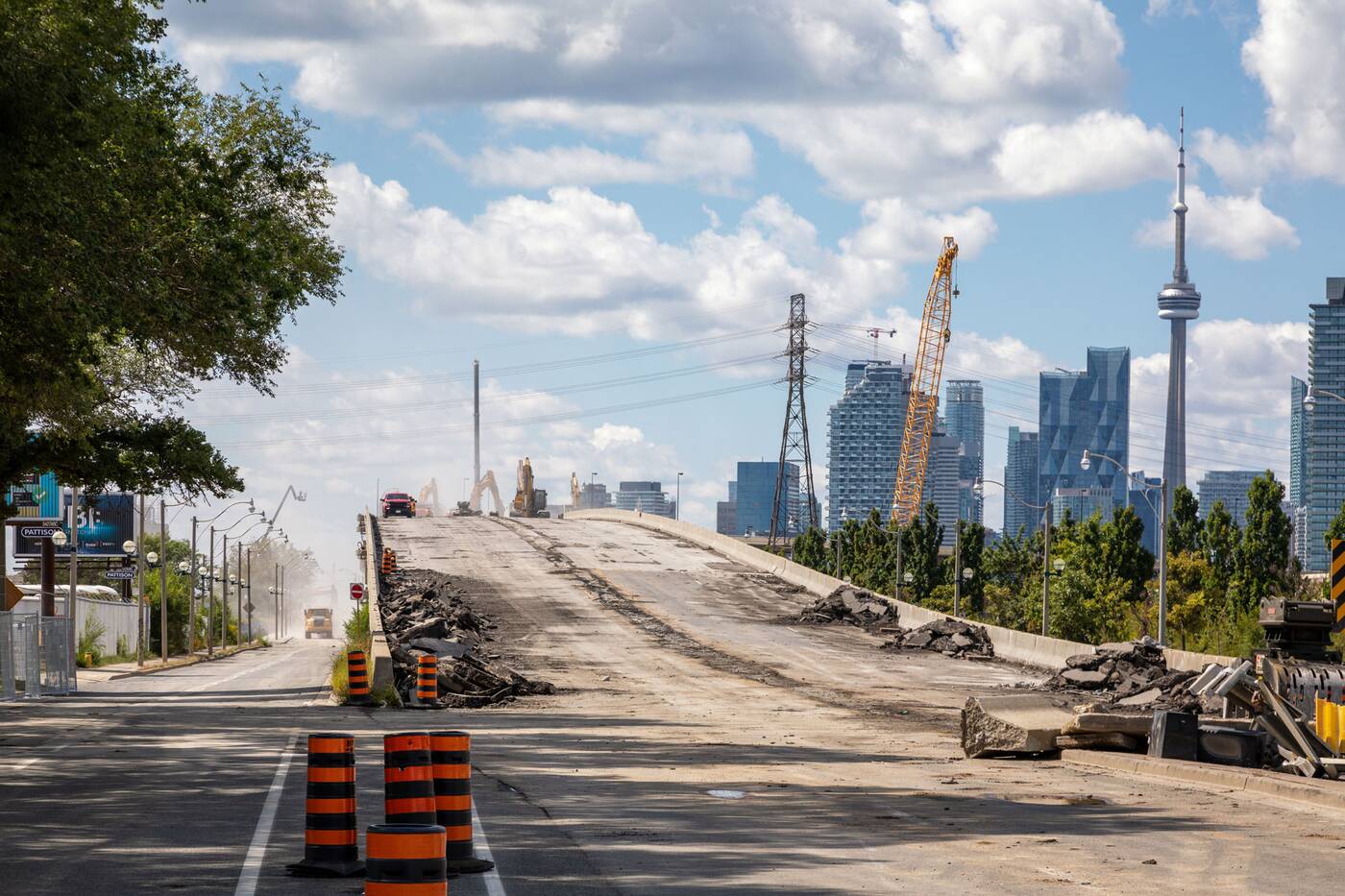 Median removed from Logan exit, with demolition vehicles working away in the distance.

In west-facing views from the edge of the construction zone, clouds of demolition dust obscured the progress made for the elevated sections of ramps beyond. 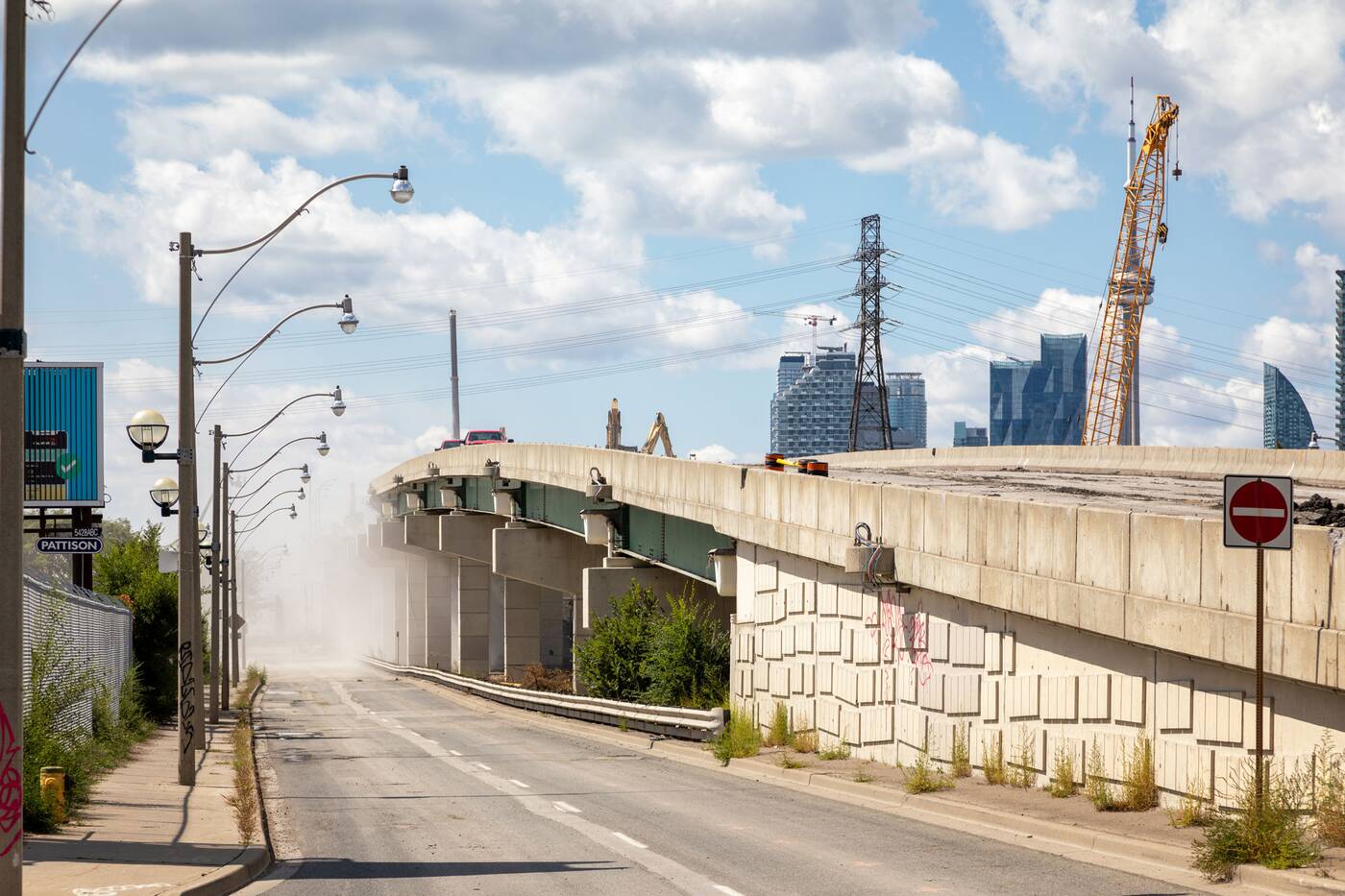 Looking west on Lake Shore Boulevard from the east end of the Logan exit.

Teardown work was much further along for the elevated section stretching west from just east of Don Roadway, hugging the north bank of the Keating Channel. 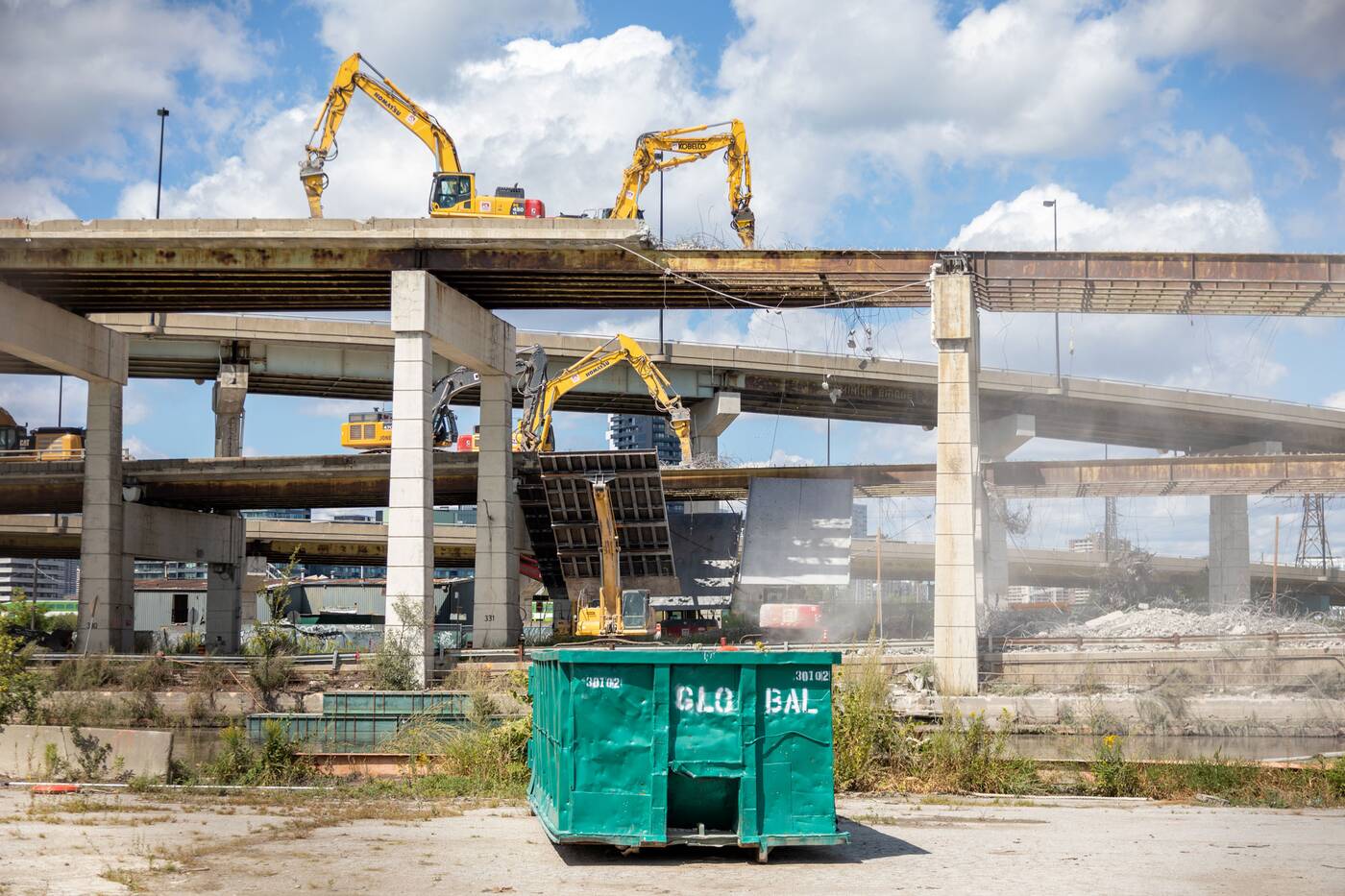 Views facing north from Villiers Street show a group of four excavators equipped with hydraulic breakers backing their way eastbound towards the exit ramp, ripping up asphalt and concrete as they go. 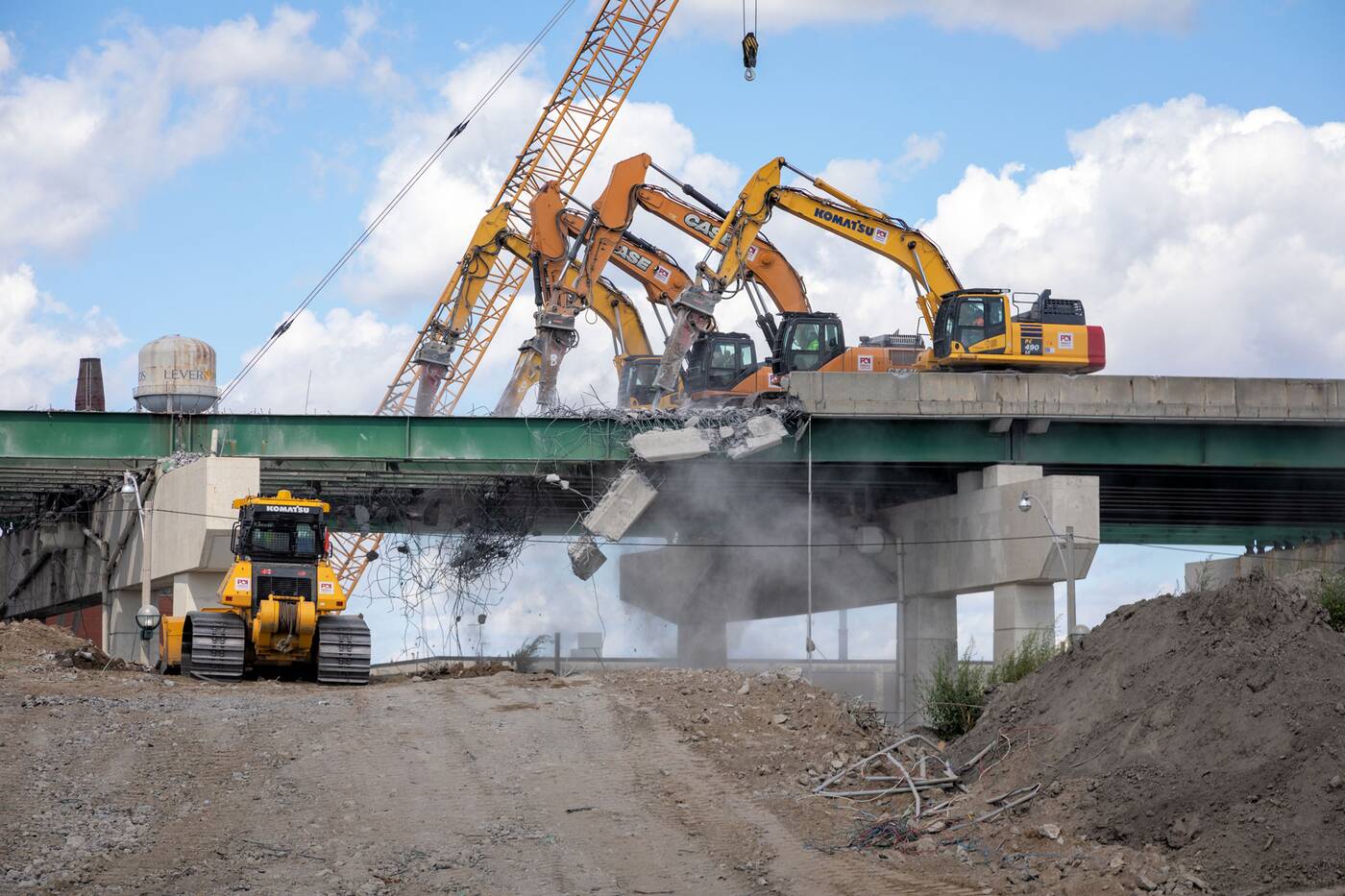 Sections west of these excavators have been reduced to little more than the steel skeleton of the ramps and their concrete supports. 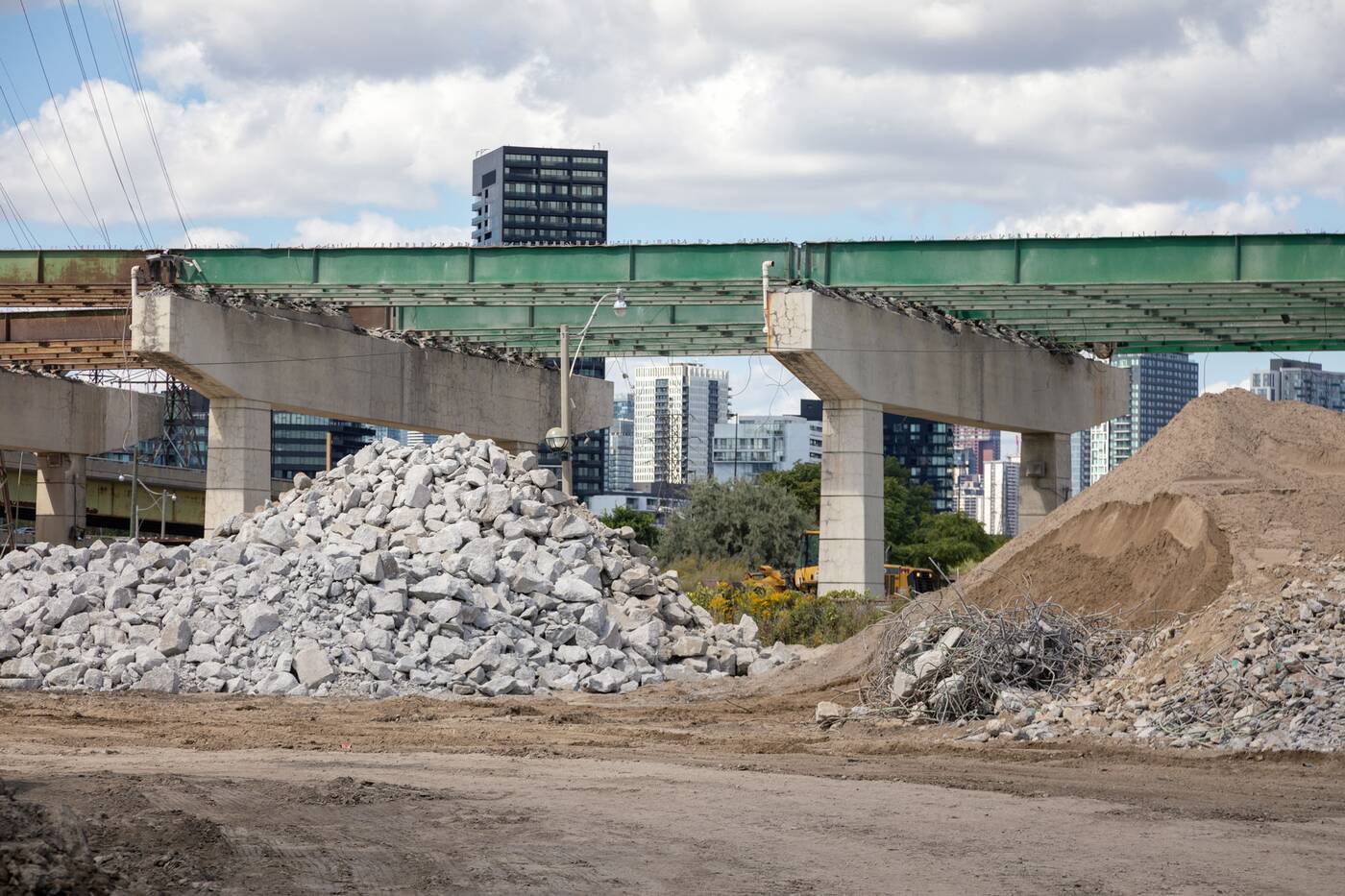 Road surface removed from a stretch of the ramps.

Another fleet of excavators works on the ground in tandem with dump trucks, sorting rubble and twisted steel into piles and then trucking them off-site for recycling. 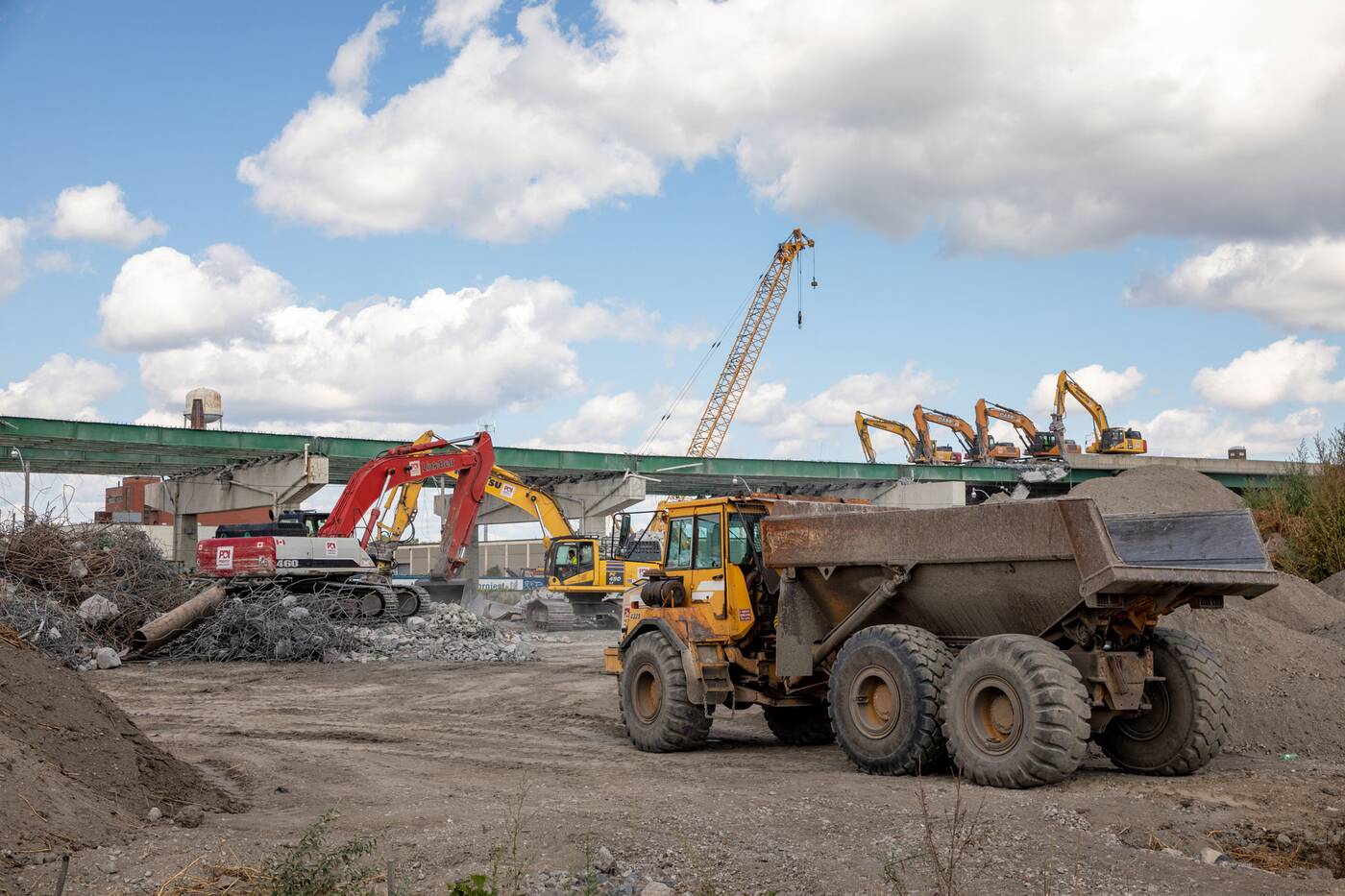 Sorting and recycling of demolition debris.

Areas stripped down to their steel girders are now being carefully disassembled with a mobile crane. 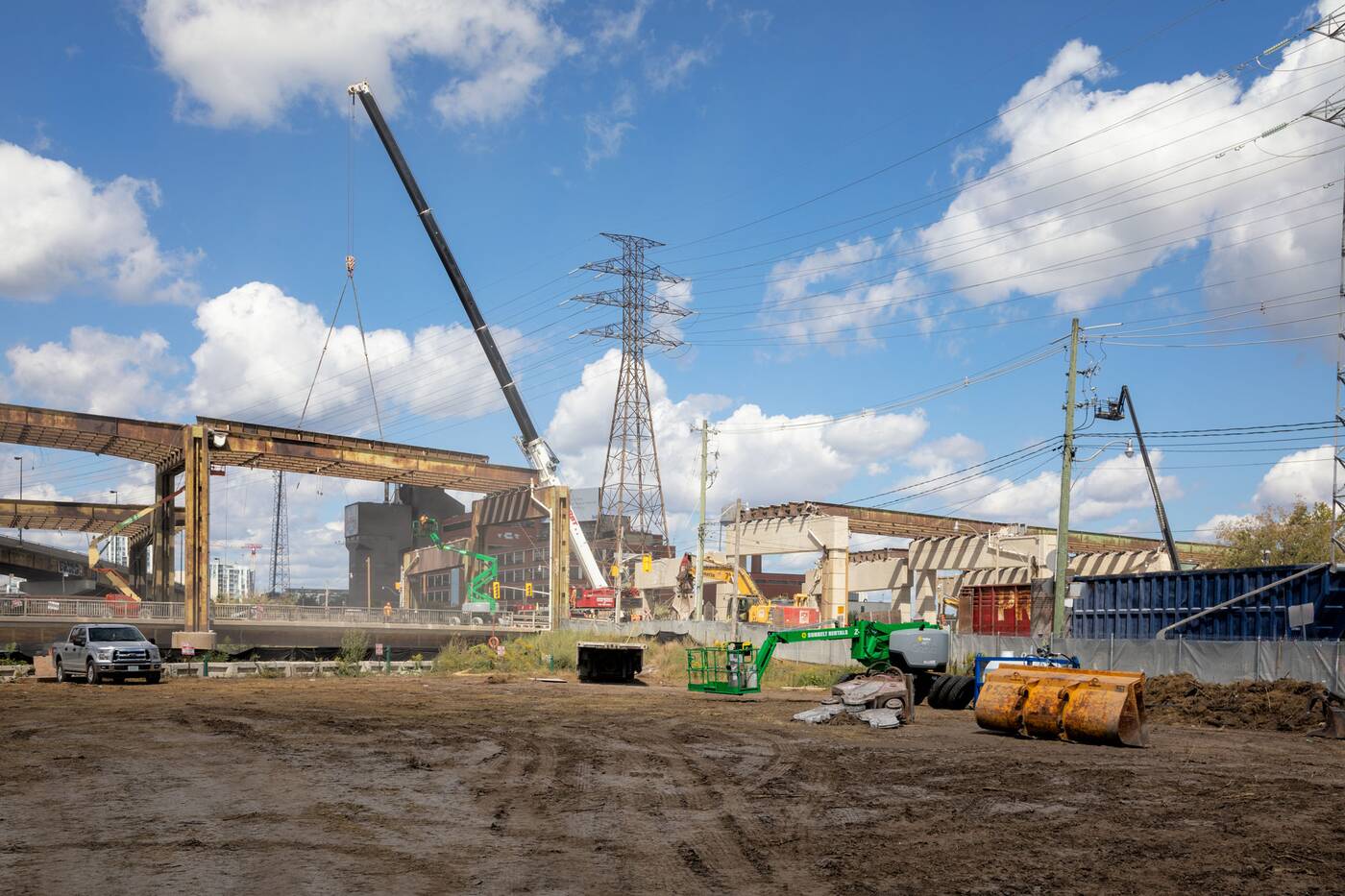 At Don Roadway, a stretch of the elevated structure has been fully disconnected. 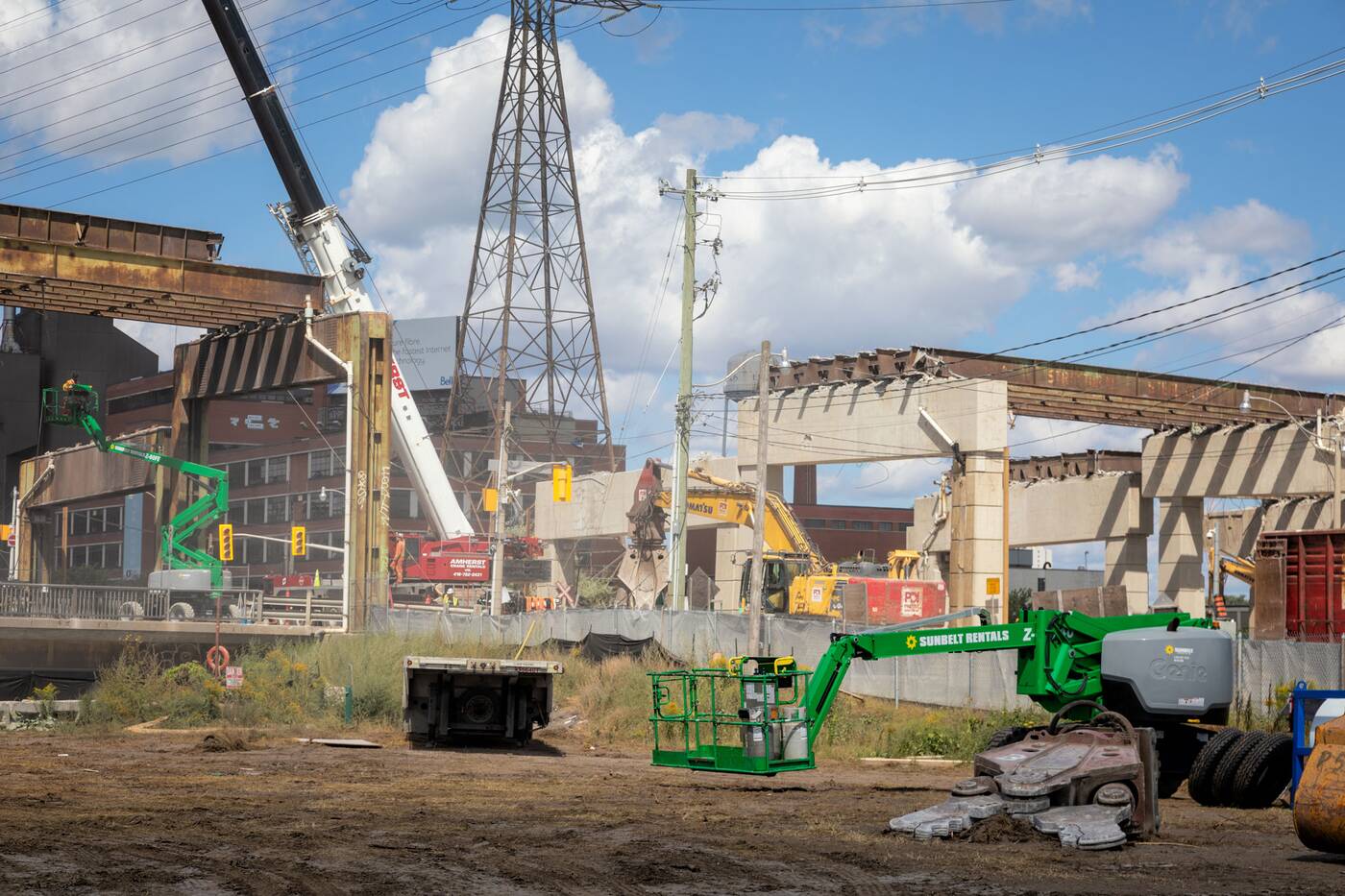 It's a pretty surreal view to see the Don Roadway and Lake Shore Boulevard intersection, a corner that has been shaded by exit ramps since the exits opened in July 1966, fully exposed to the sky. 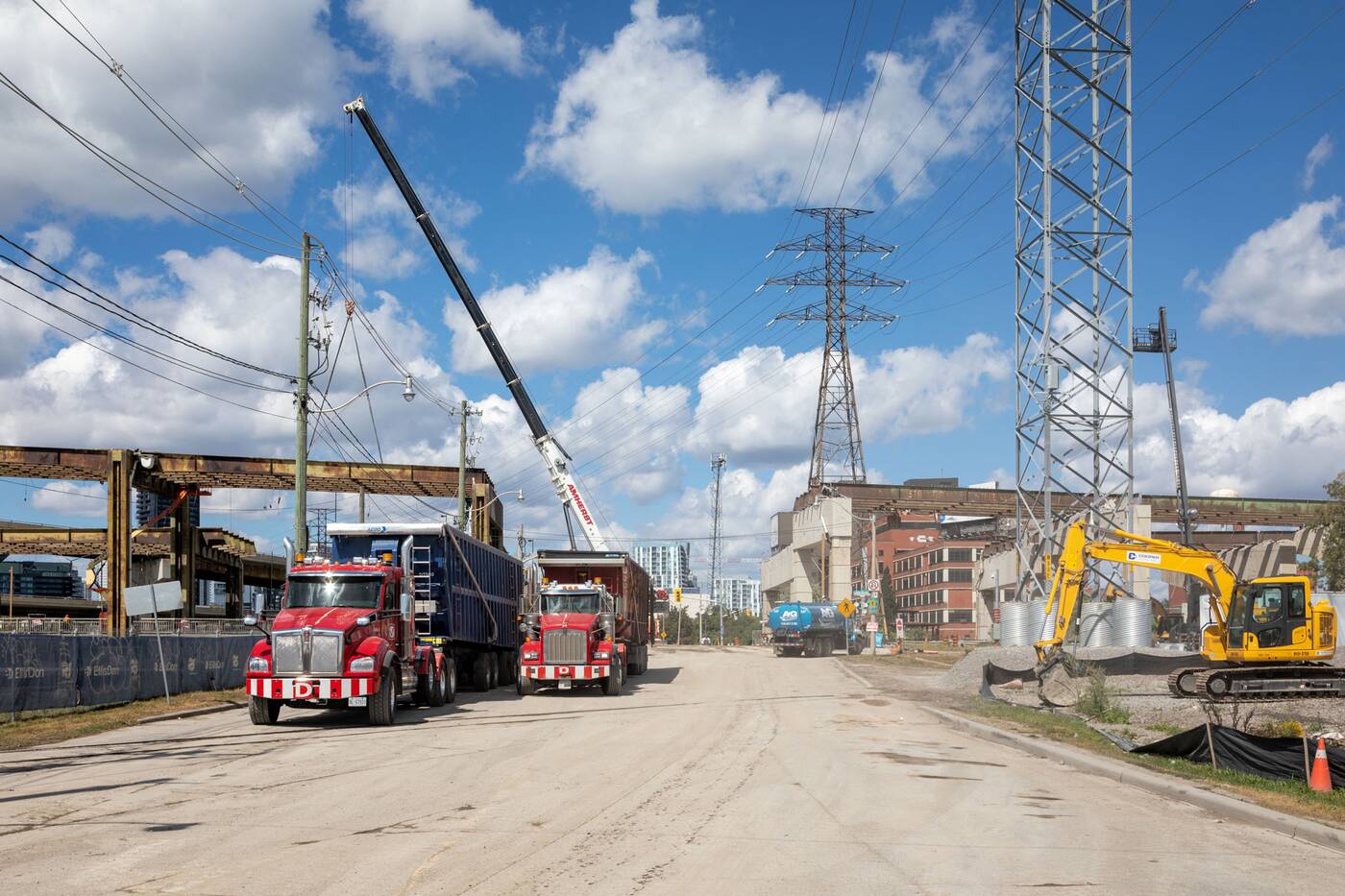 Facing north on Don Roadway to demolished section of ramps.

Concrete crushing is a piercing sound no matter where it happens, but the high elevation of this stretch means that not only was noise travelling further, but the concrete chunks were falling from higher. 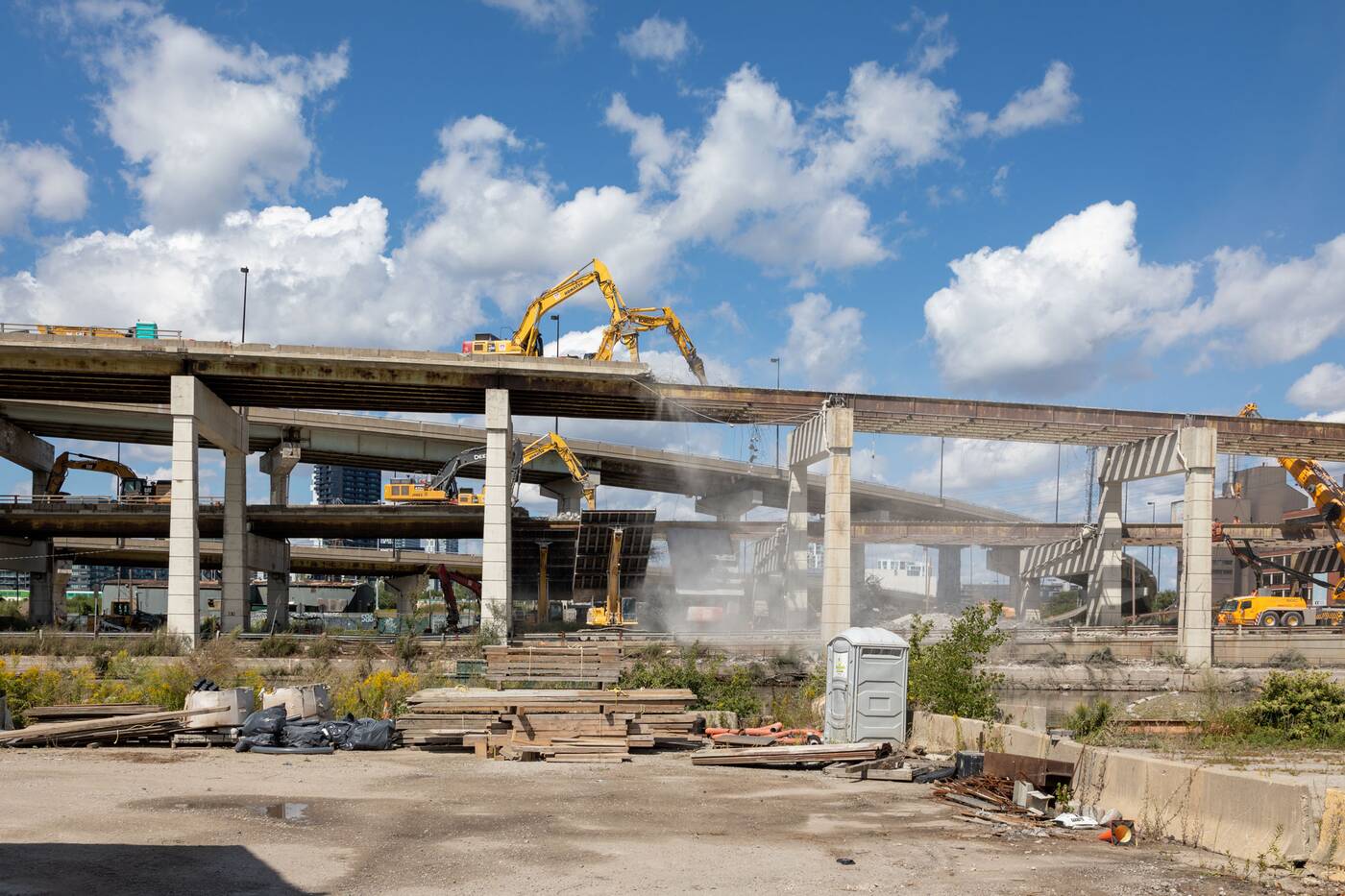 Debris being caught by angled boards, reducing spread of debris and noise.

Excessive noise was mitigated, at least slightly, through the use of large boards angled to catch the falling debris and concentrate it into a smaller area for sorting. 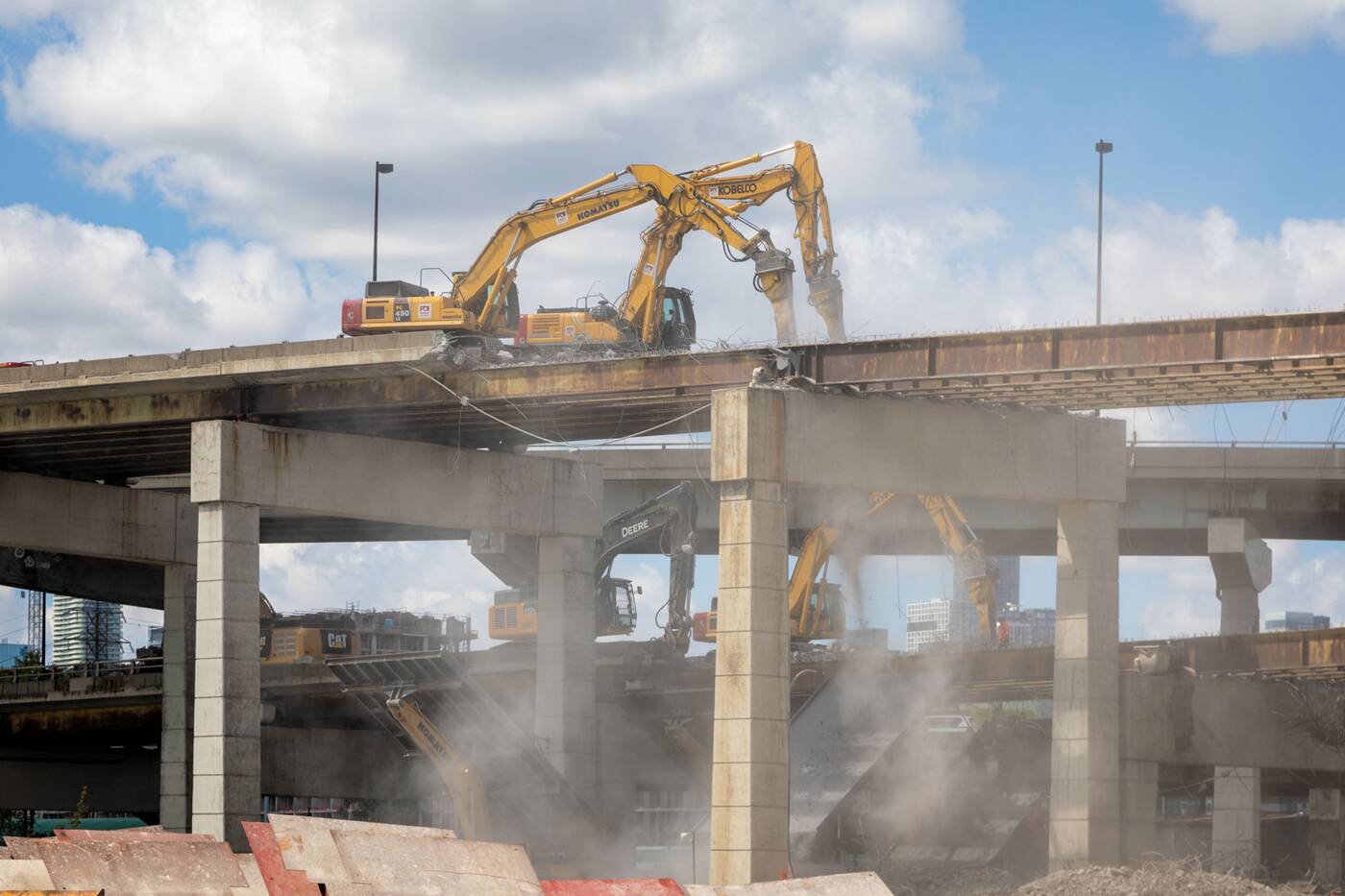 Boards catching falling debris as excavators chew away at concrete.

The noisy concrete crushing activities are limited to weekends only, from 7 a.m. to 11 p.m. Luckily for those working in the area, all demolition done outside of these hours will be limited to low-noise tasks like rubble cleanup and the removal of steel beams. 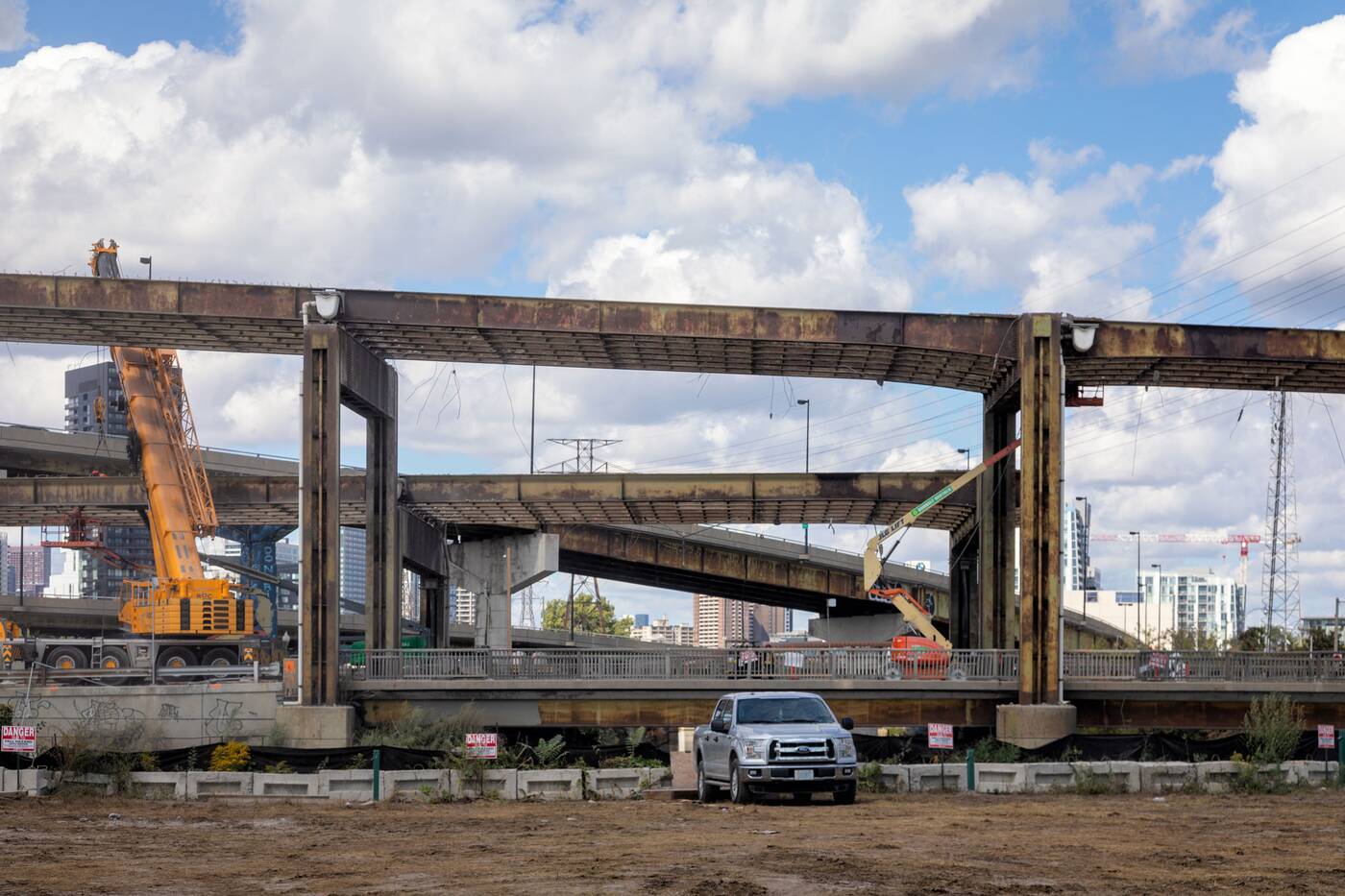 Ramps reduced to their steel structures north of the Keating Channel.

Road closures to accommodate the teardown work will continue on weekends only through October. 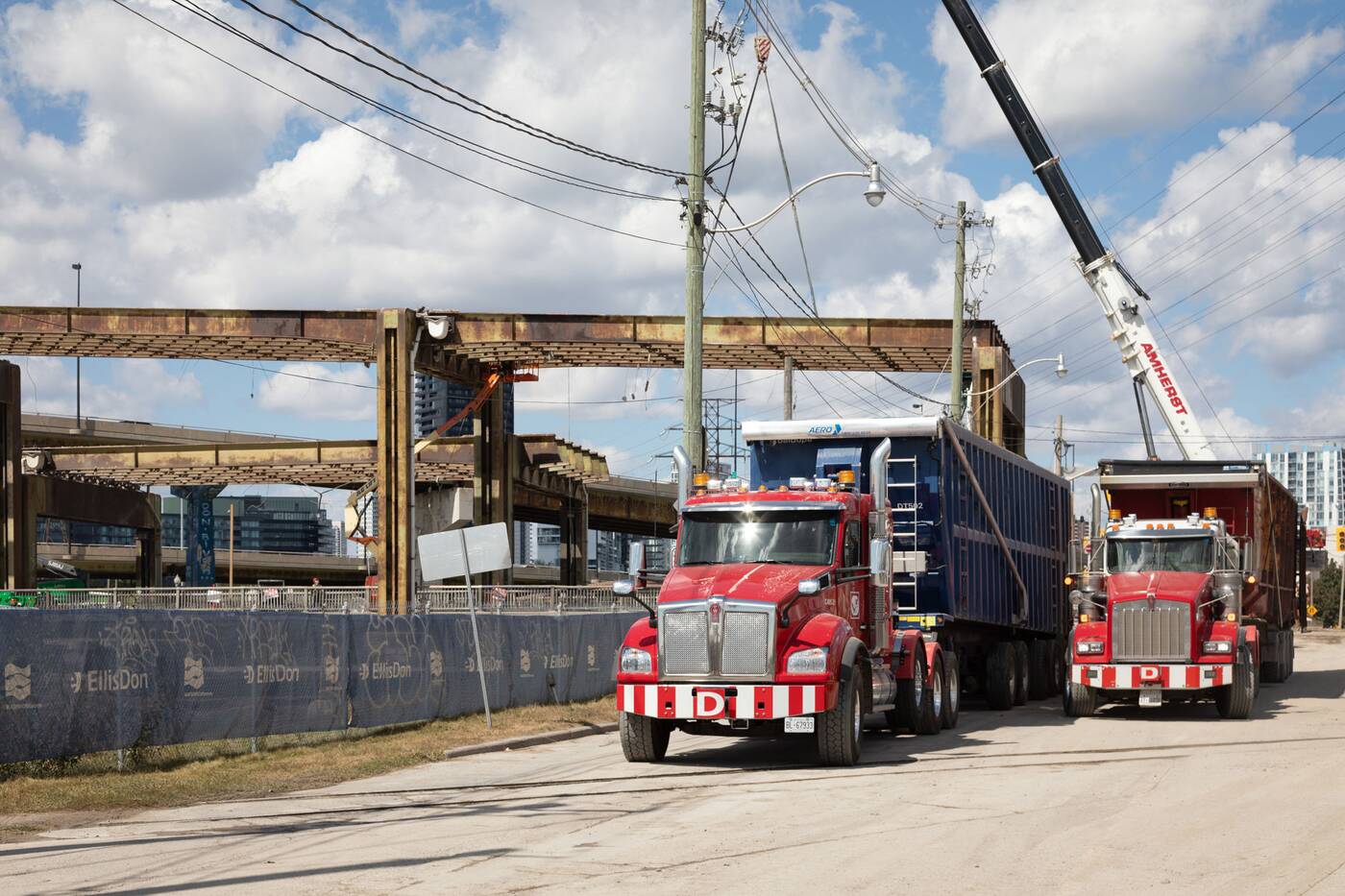 A typical road closure in the area to accommodate demolition work.

Drivers should take extra care to avoid the area and contribute to what is already a traffic nightmare. 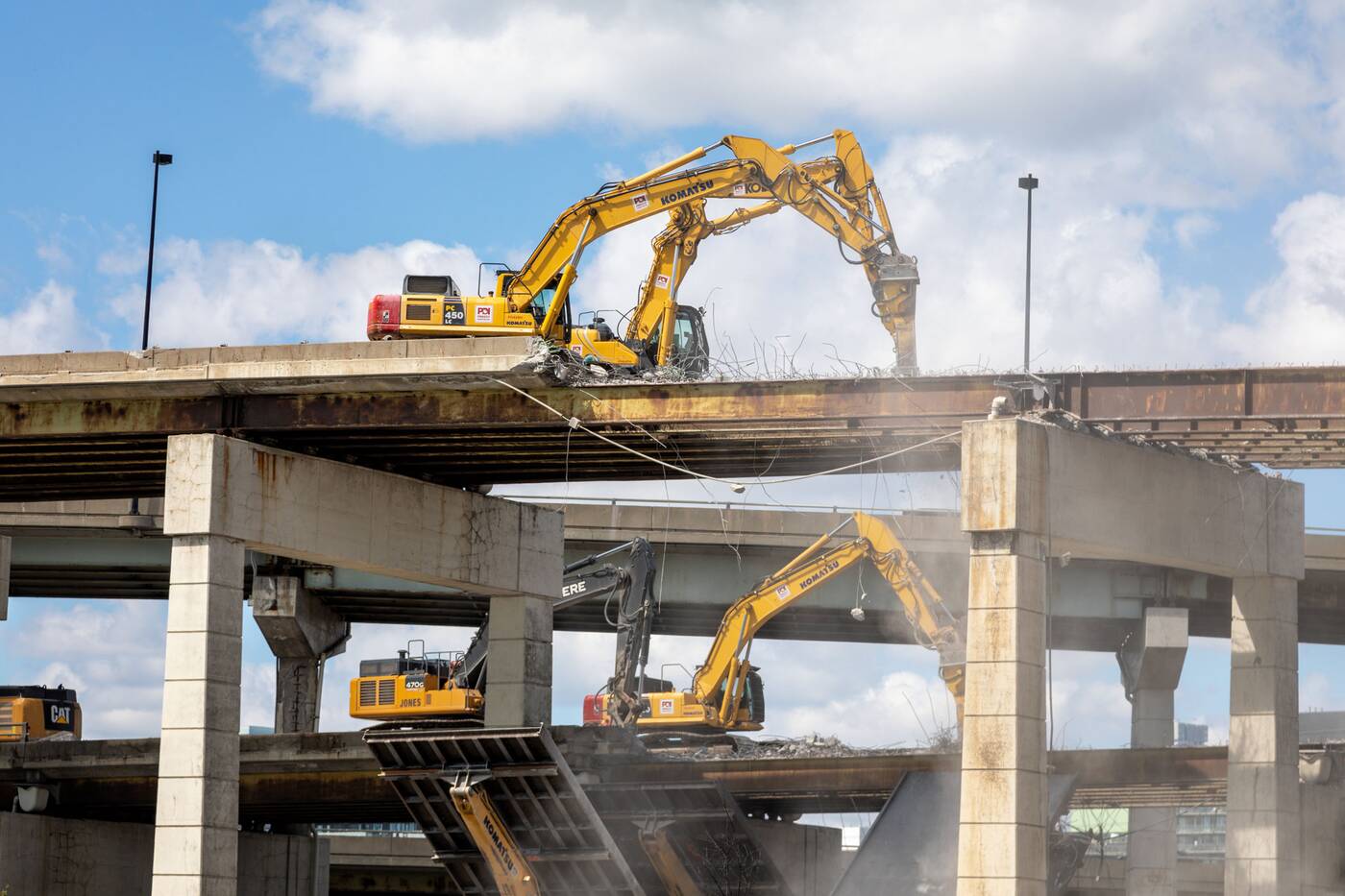 Teardown activity is affecting travel times through the area.

Cars were backed up on streets in and around the Port Lands this weekend thanks to a tangled web of closures, including Lake Shore Boulevard East from Cherry Street to Carlaw Avenue and Don Roadway between the Don Valley Parkway and Commissioners Street. 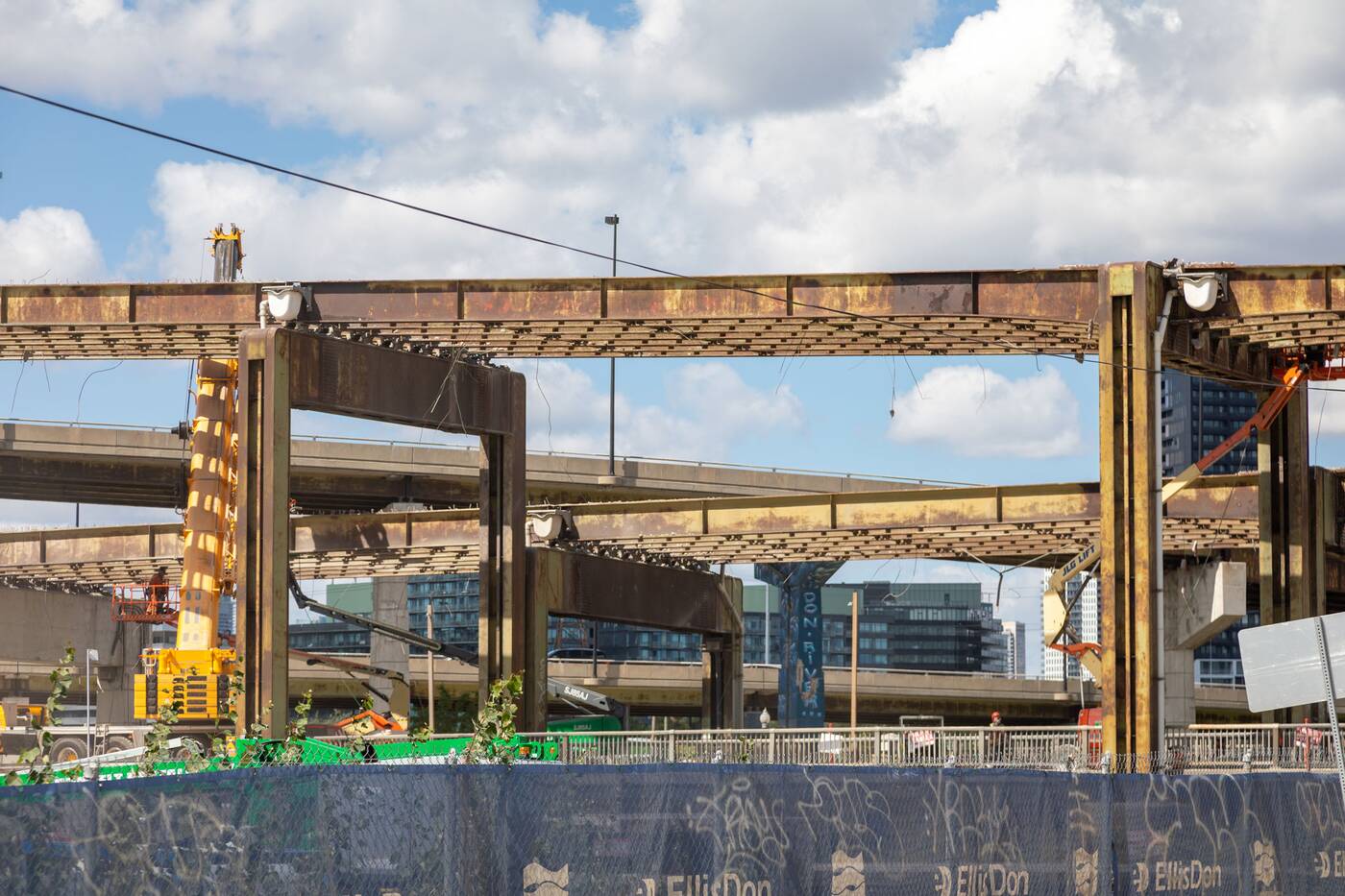 Sunlight passing through steel beams of the ramps for the first time in about 55 years.

Though the noise and the traffic are what people may be talking about today, the project has the potential to significantly improve the pedestrian and cyclist experience on what has always been a less-than-stellar area of the waterfront. 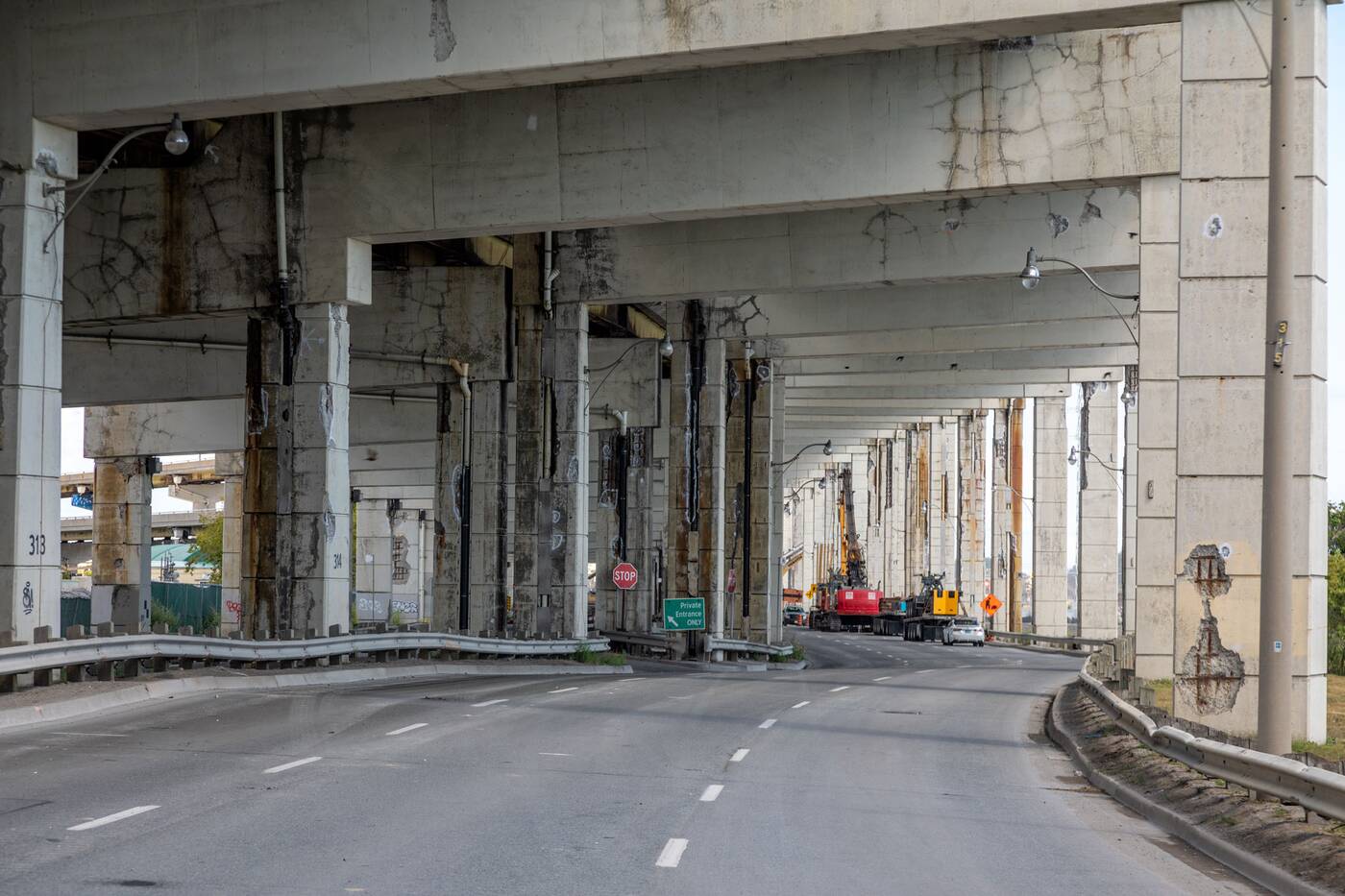 This work will include the widening and lengthening of the Lake Shore Bridge over the Don River, and the reconstructing of Lake Shore between Don Roadway and Carlaw Avenue with improved, safer intersections and cycling infrastructure.