Rouge National Urban Park is one of the city's largest most beautiful sprawling green spaces as well as the largest park of its kind in North America, with tons of trails with breathtaking views, ample areas for camping (and the only campground in Toronto), and opportunities for fishing, canoeing and kayaking, swimming, and more.

The sprawling 79-square-kilometre park is already beloved, but slated to become even more of an attraction after a dramatic makeover that will see the installation of new pavilions, paths, lookout points, dining and event spaces, and other cool new features.

Currently, there are three design options on the table for the new amenities coming to the public space, and Parks Canada is seeking public input on which to select.

All of them are distinctive, though contain similar elements — such as an extended platform offering spectacular vantages — and are equally alluring. 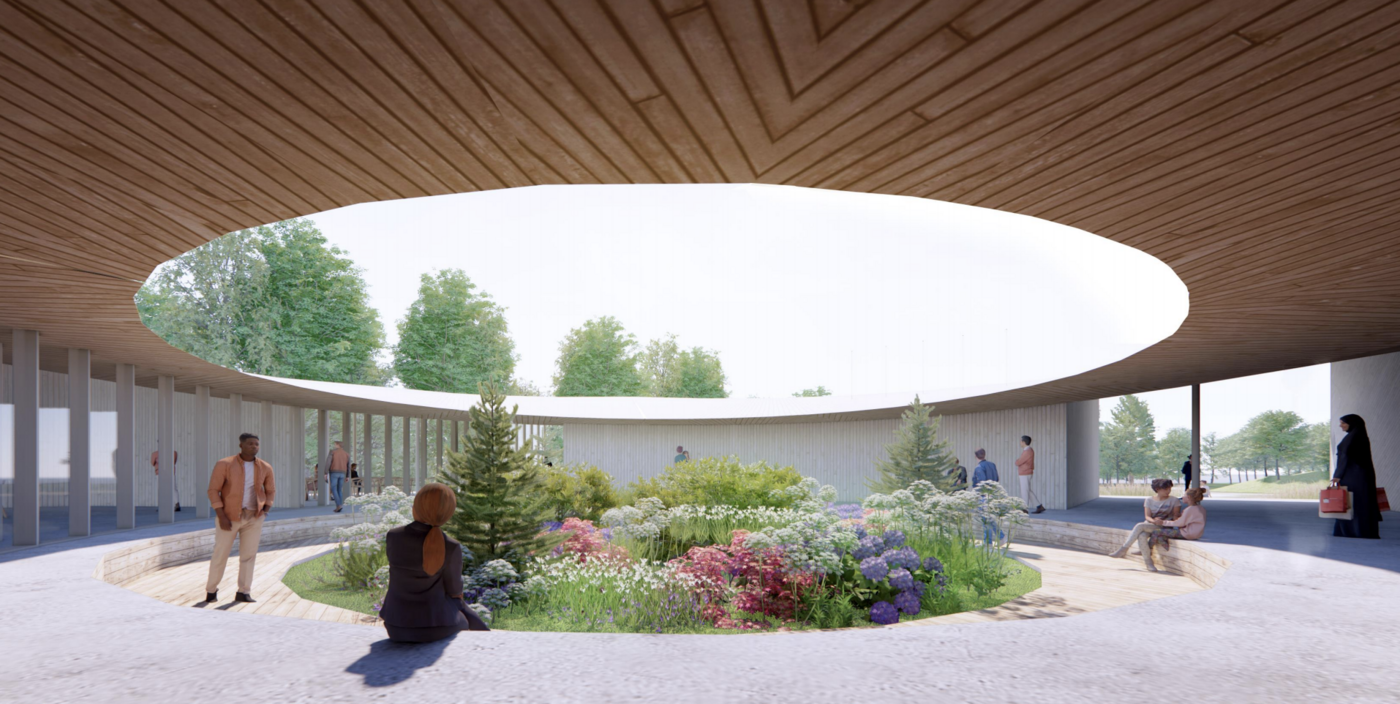 The focal point of the first design option is a circular courtyard and garden. Rendering from the City of Toronto.

The first, called Solstice Courtyard, centres on (you guessed it) a circular open air courtyard and garden surrounded by a covered pathway that connects separate pavilions for learning and events, as well as a dining area and gift shop. 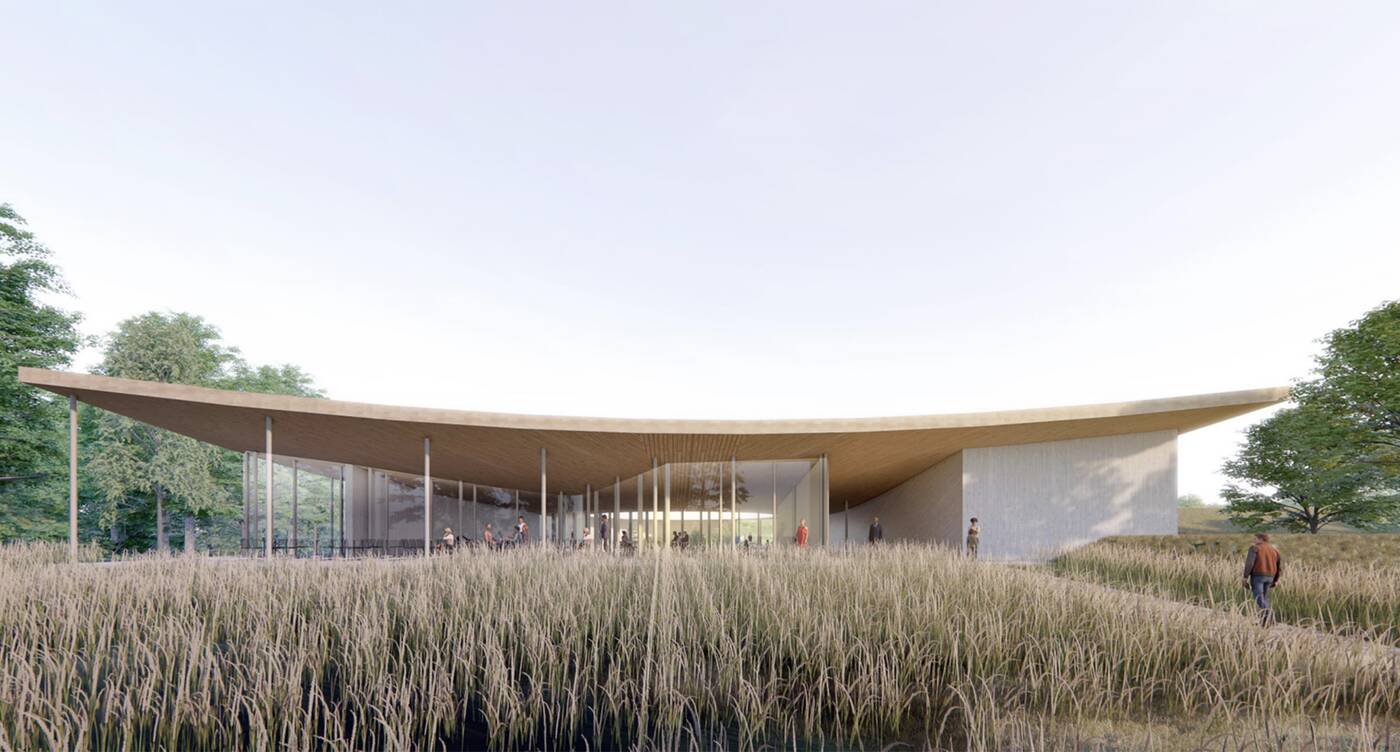 Another look at the structure that will house multiple pavilions and the central garden in the Solstice Courtyard plan. Rendering from the City of Toronto.

The architecture will work with the sun's angles during both summer and winter solstices to ensure that daylight through the round roof of the courtyard "traces the path of time on the floor of the building" and coincides with its uses throughout the seasons. 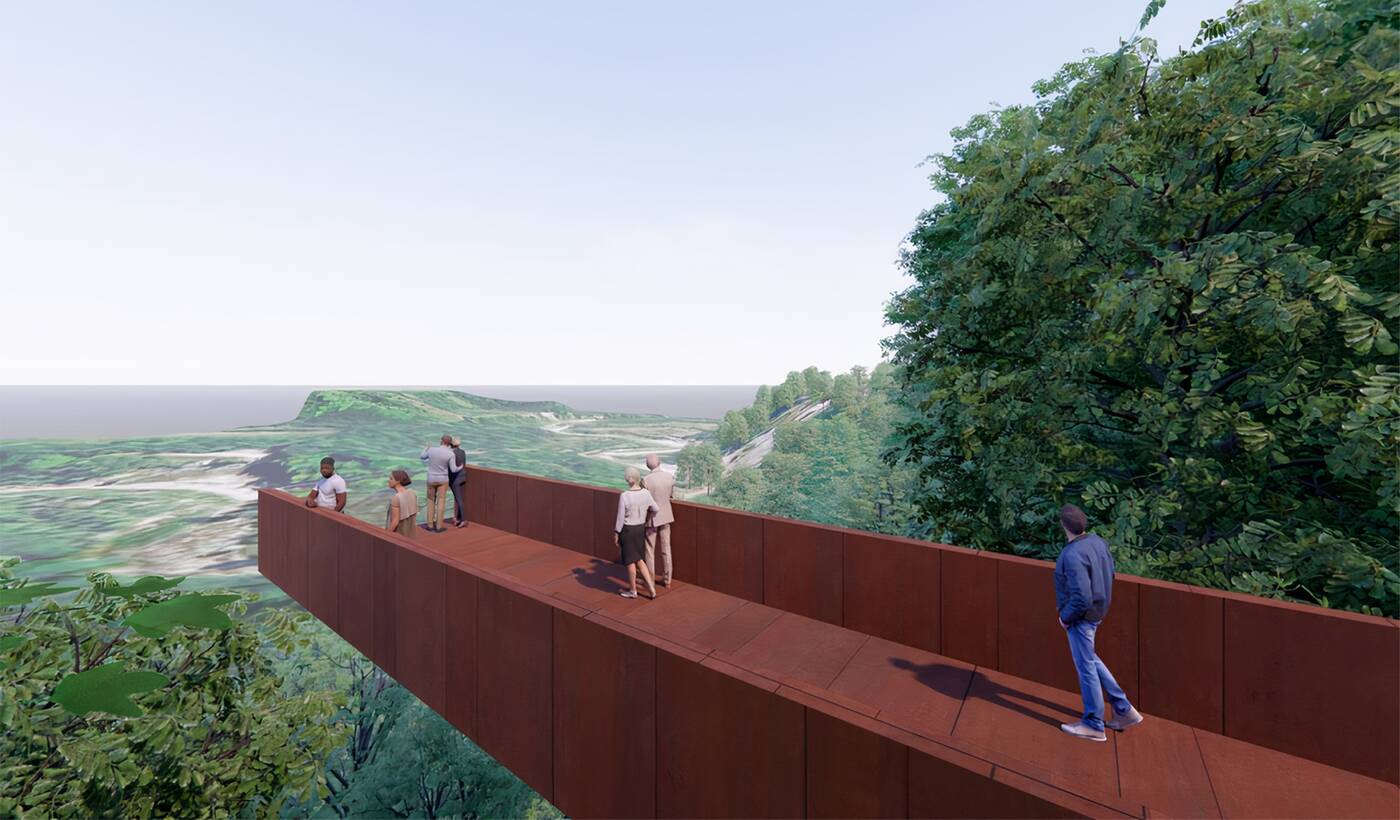 The lookout point design in the Solstice Courtyard plans. Rendering from the City of Toronto.

All events and learning spaces will be designed for people to spill out into surrounding covered and uncovered green spaces to accommodate different functions and encourage congruency between in and outdoors.

The second concept, titled Rooftop Deck, in inspired not by the solstices but by the glaciers that formed the Rouge and the Oak Ridges Moraine. 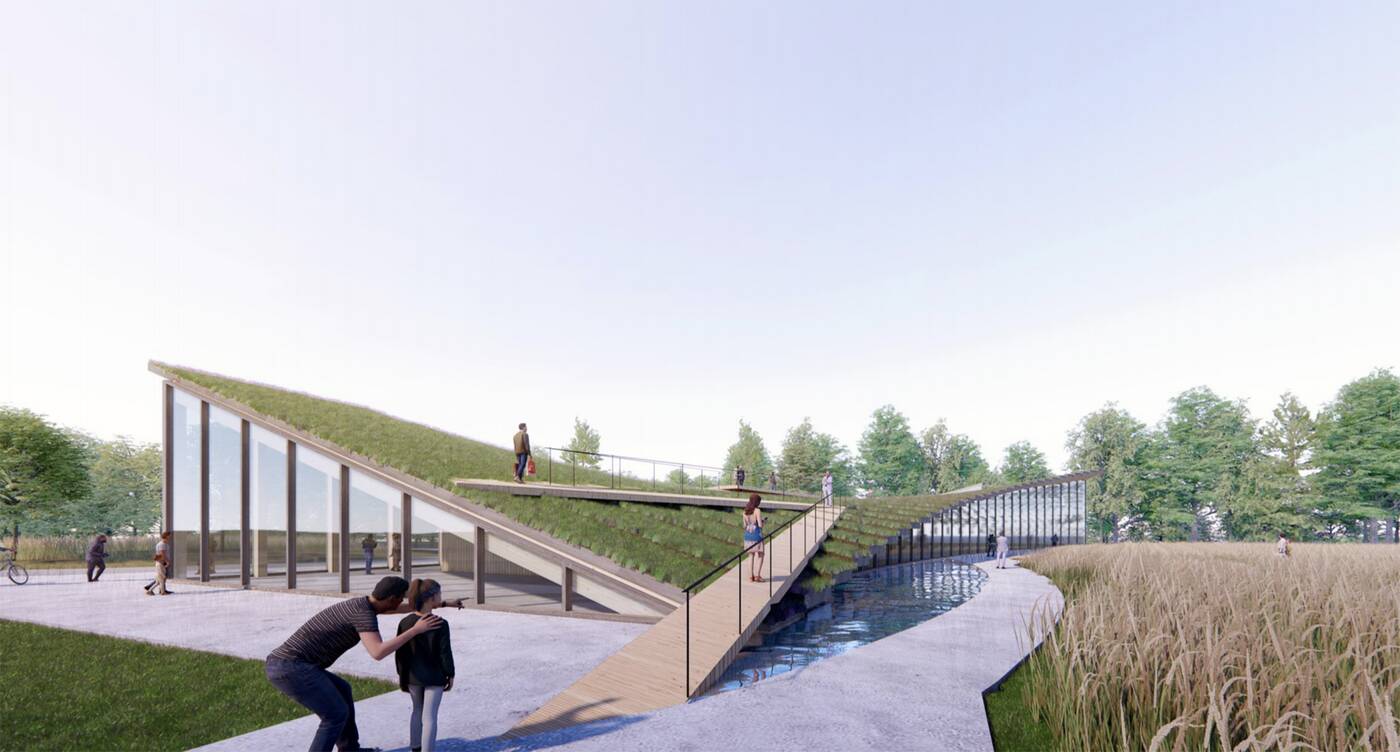 The green roof, accessed from a ramp, provides a lookout and further potential for programming opportunities. Rendering from the City of Toronto.

This design appears more spread out on the property, with a central visitors centre, and various outdoor spaces including an orchard, amphitheatre,events green and contemplative space connected by pathways surrounding the building. 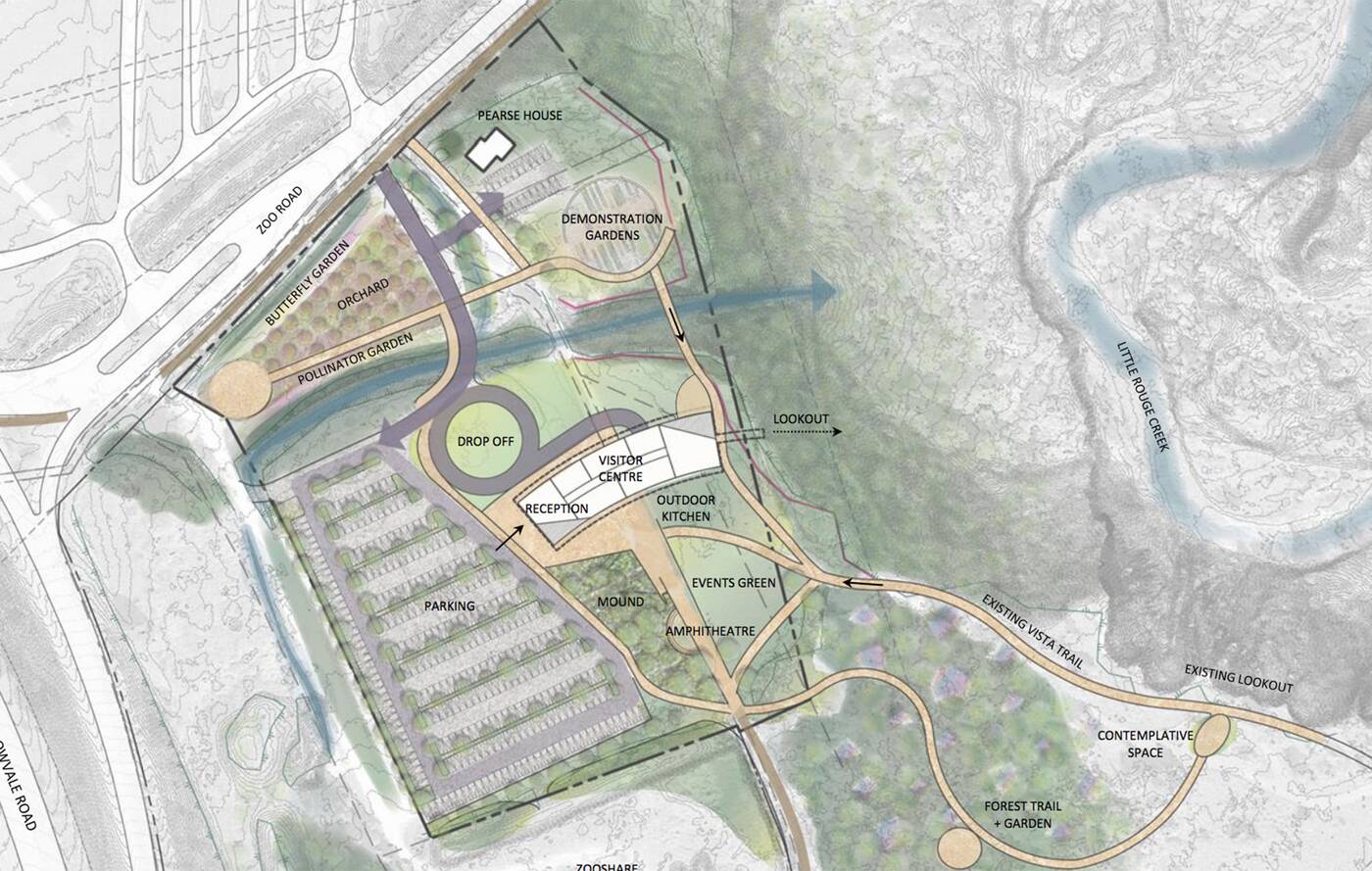 A bird's-eye view of the lay of the land in the Rooftop Deck plan. Rendering from the City of Toronto.

The same events space, gift shop, food and dining space, and learning spaces would be housed in the centre, which will have a sloping green roof that people can walk on top of and look out from via an elevated wooden platform. 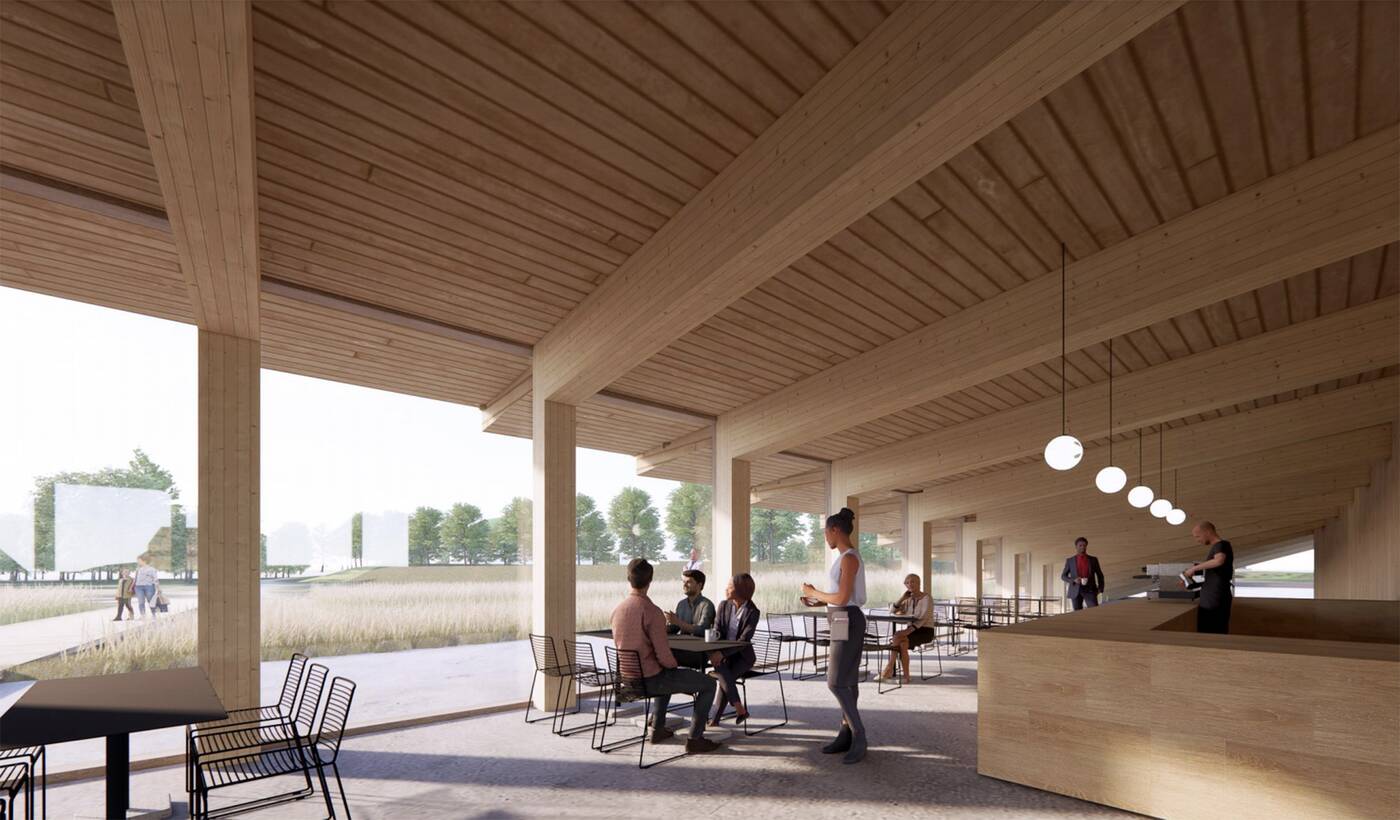 What the dining area at Rouge Park would look like if the Rooftop Deck plan was chosen. Rendering from the City of Toronto.

The third and final option for the future of the park is Forest Passage, which aims to re-establish the park's original land formation, primarily through the reconnection of the north-south orientation of the Carrying Place Trail that "had existed for millennia."

A central pavilion would be notably divided on either side of the park's  drainage swale — a low, marshy point of land that was created in the 1960s when the parkland was substantially altered from its natural state. 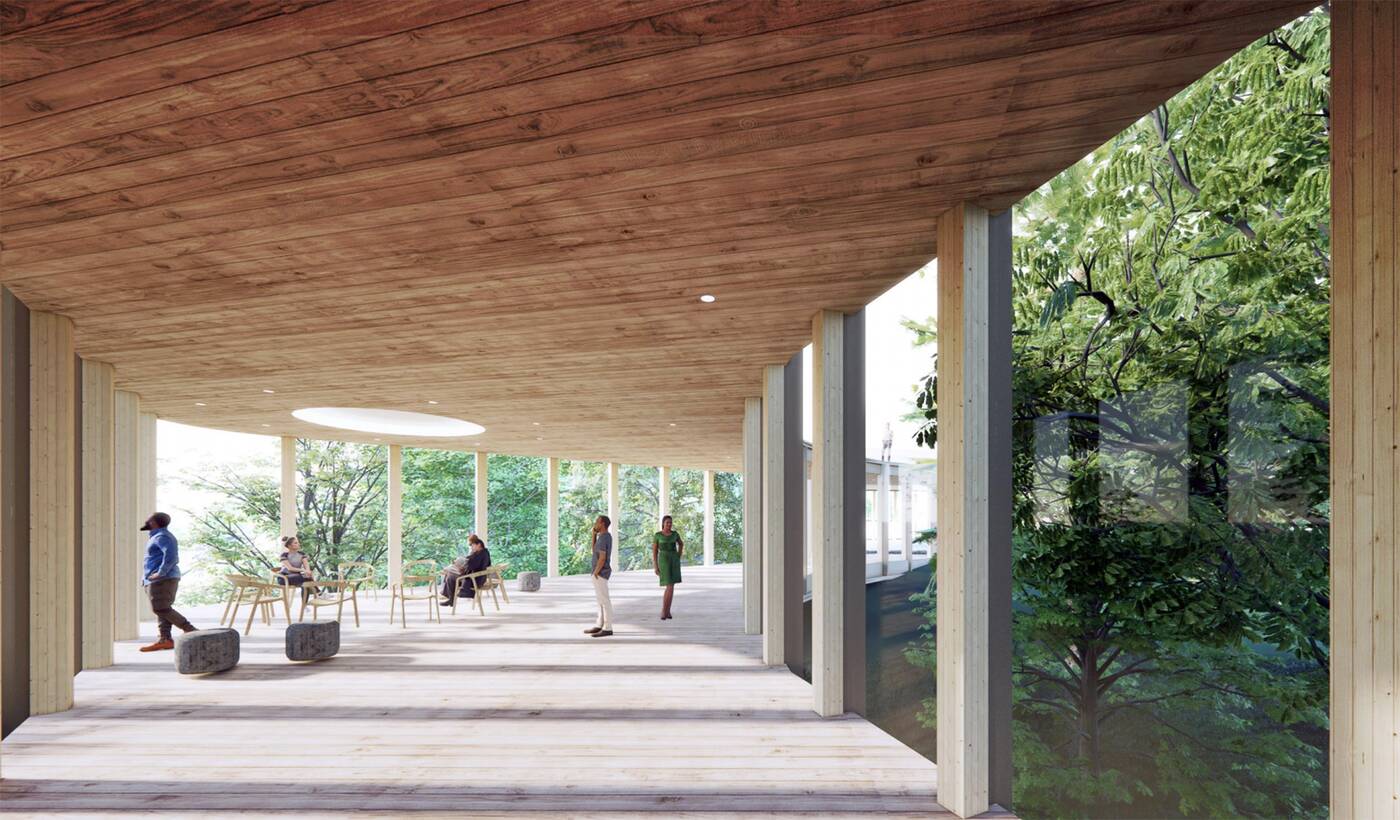 The lower level of the curved, covered bridge connecting the two sides of the main pavilion in the Forest Passage plan. Rendering from the City of Toronto.

Connecting the two halves of the main building would be a unique curved bridge that also serves as a lookout over the valley.

This design, like the last, also has green roofs that can be accessed by stairs for even more views. There are also connections to further outdoor spaces. 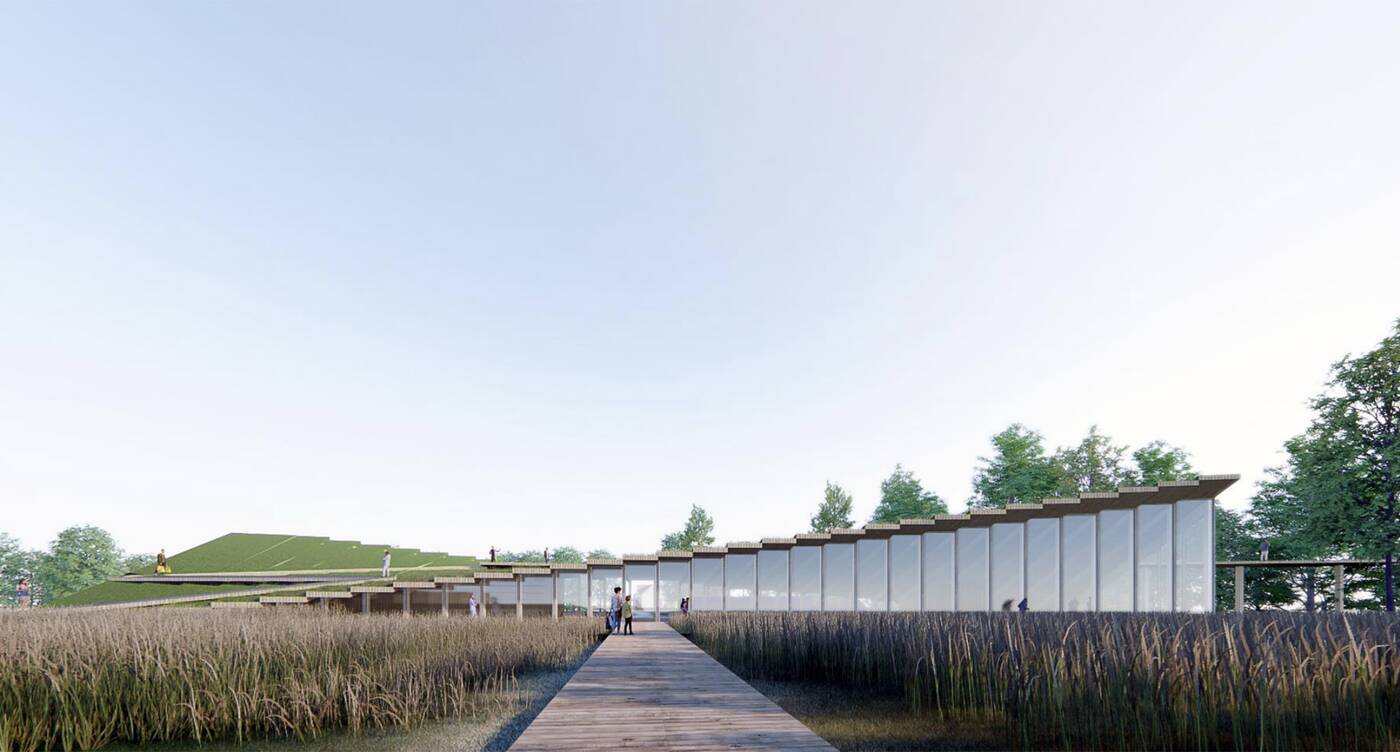 One of the two connected pavillions and its sloped green roof from afar in the Forest Passage plan. Rendering from the City of Toronto.

The finer details and impetus behind each concept are available online via the Parks Canada, as is a page for residents to weigh-in on their favourite one.

The upper deck of the curved covered bridge connecting the two halves of the main pavillion. The lookout will be accessed via stairs that will lead onto the buildings' green roofs. Rendering from Park Canada.