Vista Trail is just one of eight trails in Rouge National Urban Park, which centres around Rouge River and features plenty of hilly slopes within its valley. 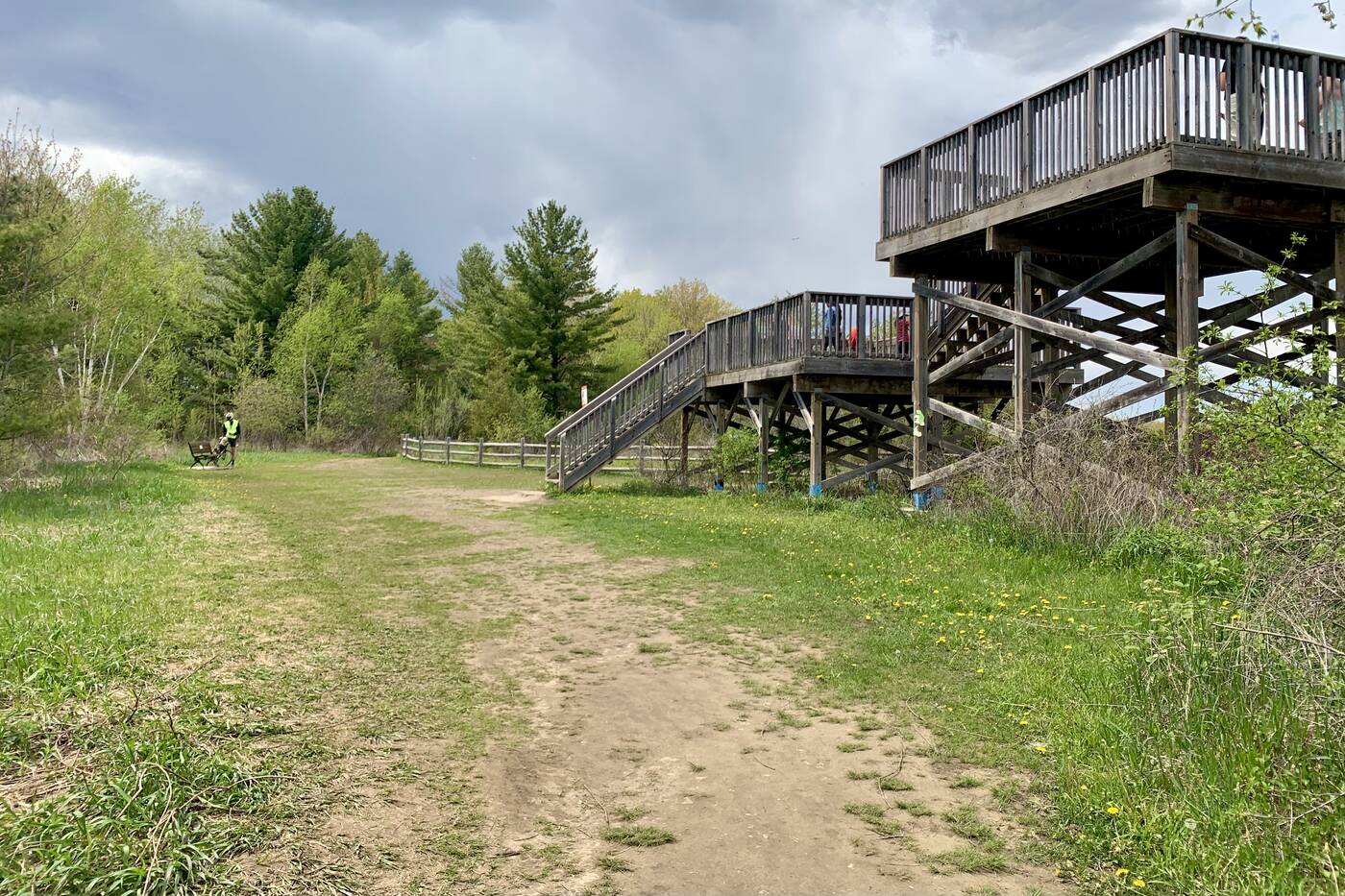 There's a two-level viewing platform near the north trailhead of Vista Trail.

Easily one of the most picturesque routes within the largest urban park in North America, it comes with an observation deck offering each hiker a panoramic look at the surrounding Carolinian forest and river below. 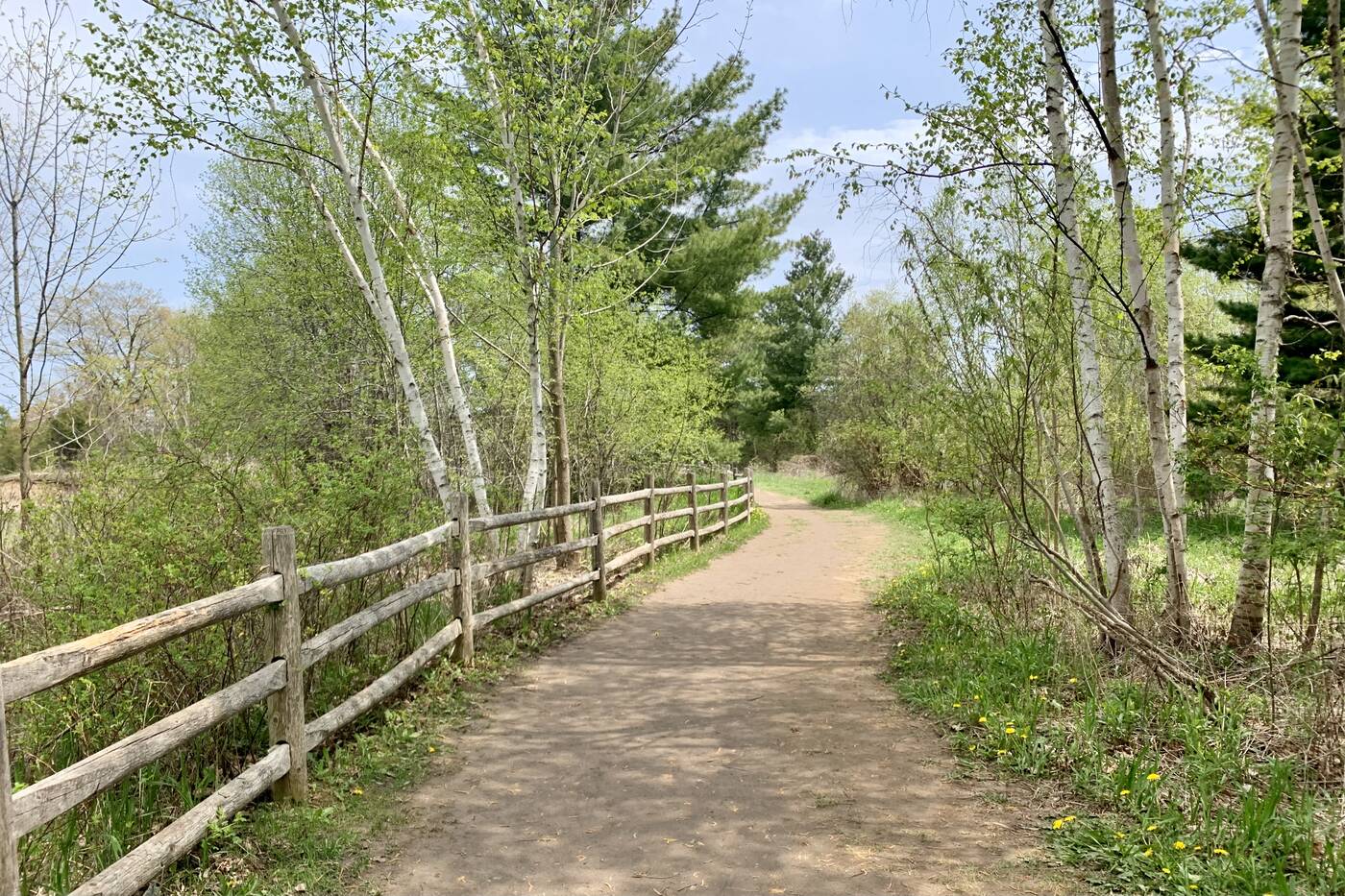 The trail extends for 1.5 kilometres but offers connections to a few other trails.

The trail is a next-door neighbour to Toronto Zoo and can be accessed off Zoo Road at Meadowvale Road with parking lots at both the north and south trailheads. 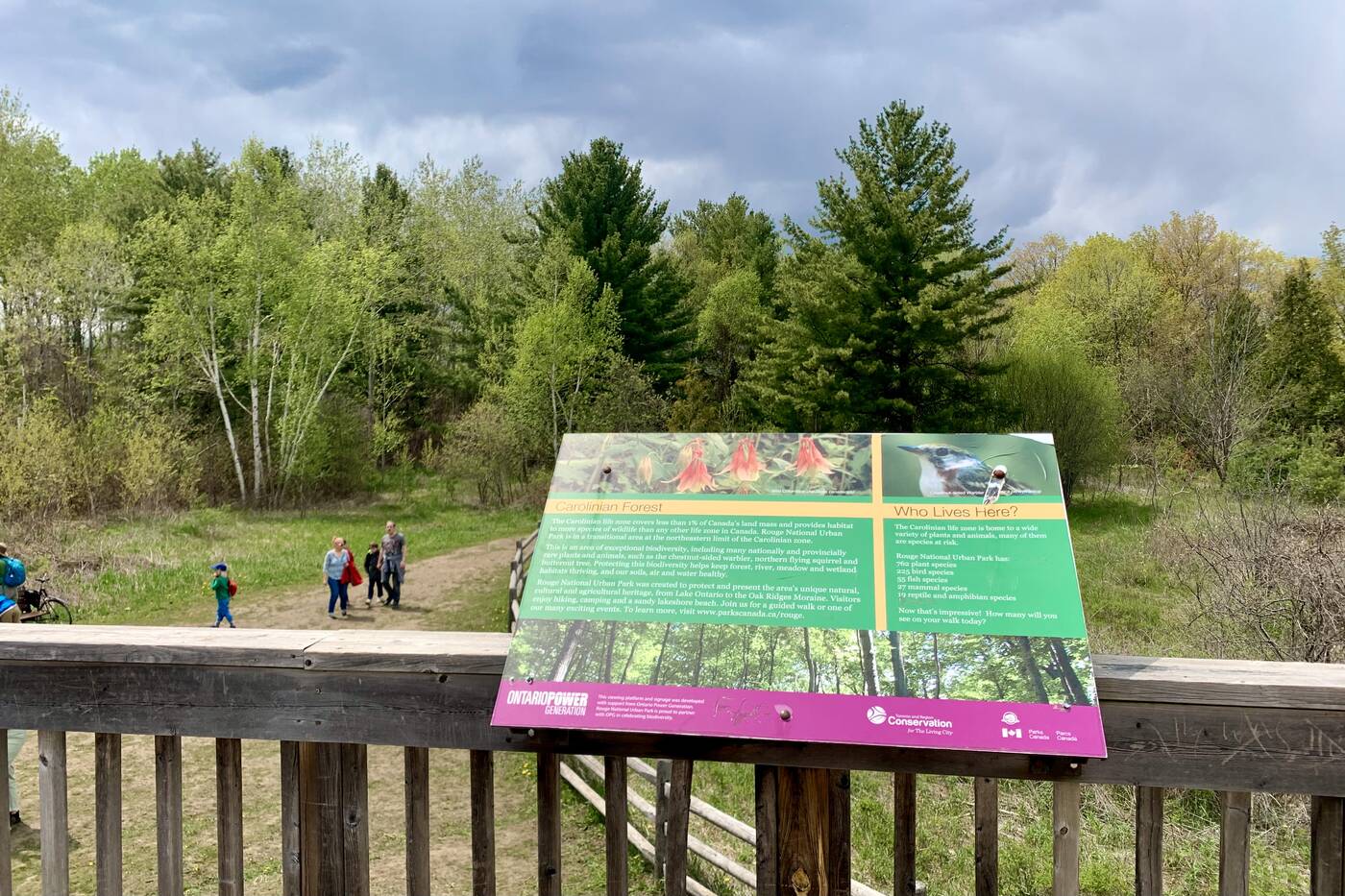 The trail is in the middle of a Carolinian forest.

The two-level viewing platform near the north trailhead fills up in the fall when the valley pops with colour, but the sight really would be quite something any time of the year. 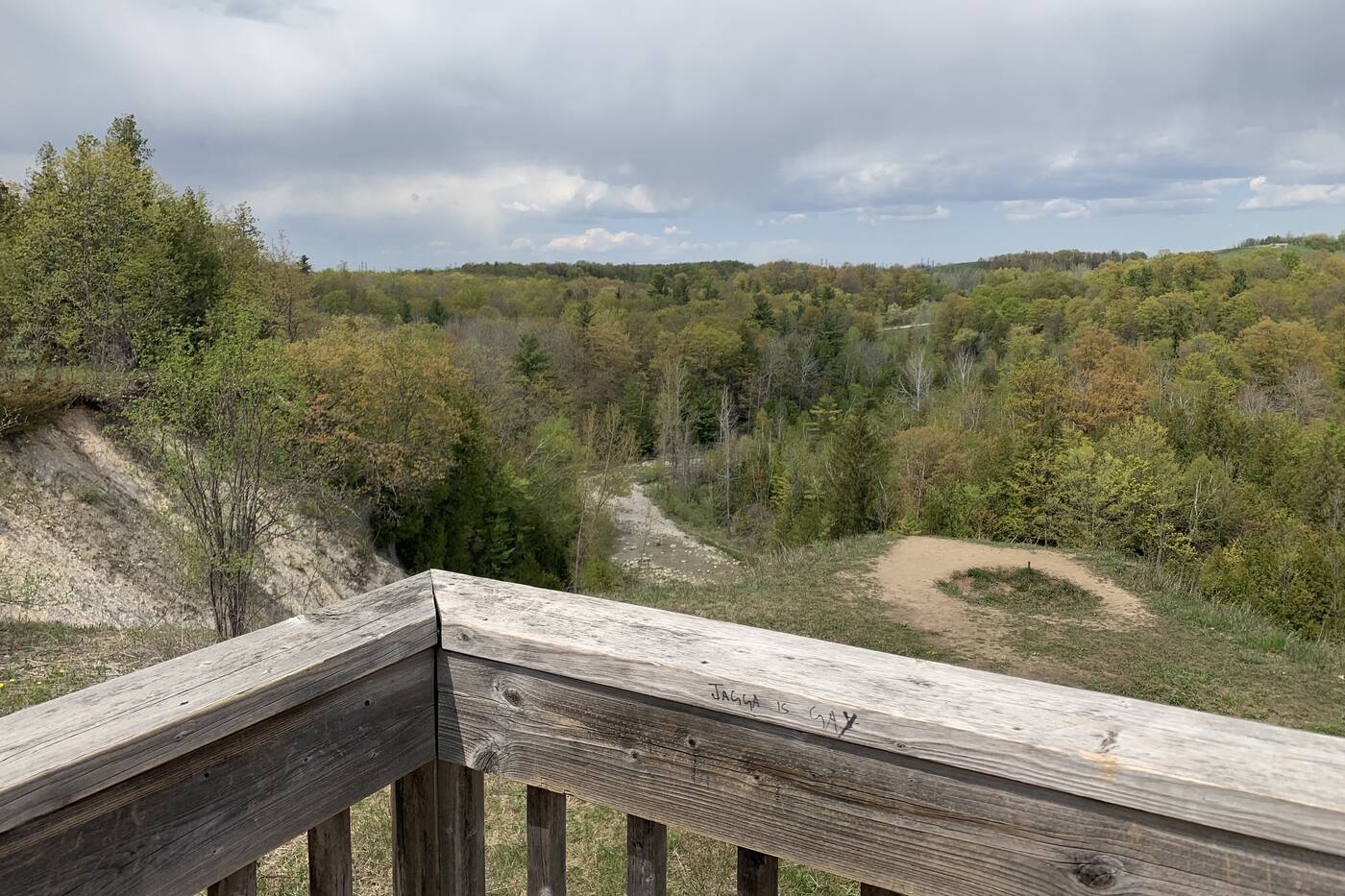 The Rouge Valley and Rouge River can be viewed from the observation deck.

You'll be looking at the southbound Little Rouge Creek nestled between steep valley walls lined with a deciduous forest of sugar maple, beech and oak. The waterway will eventually meet up with the parallel Rouge River at the marsh.

Beare Hill, a decommissioned landfill that's now one of the highest points of land in the city, is also noticeable to the north. 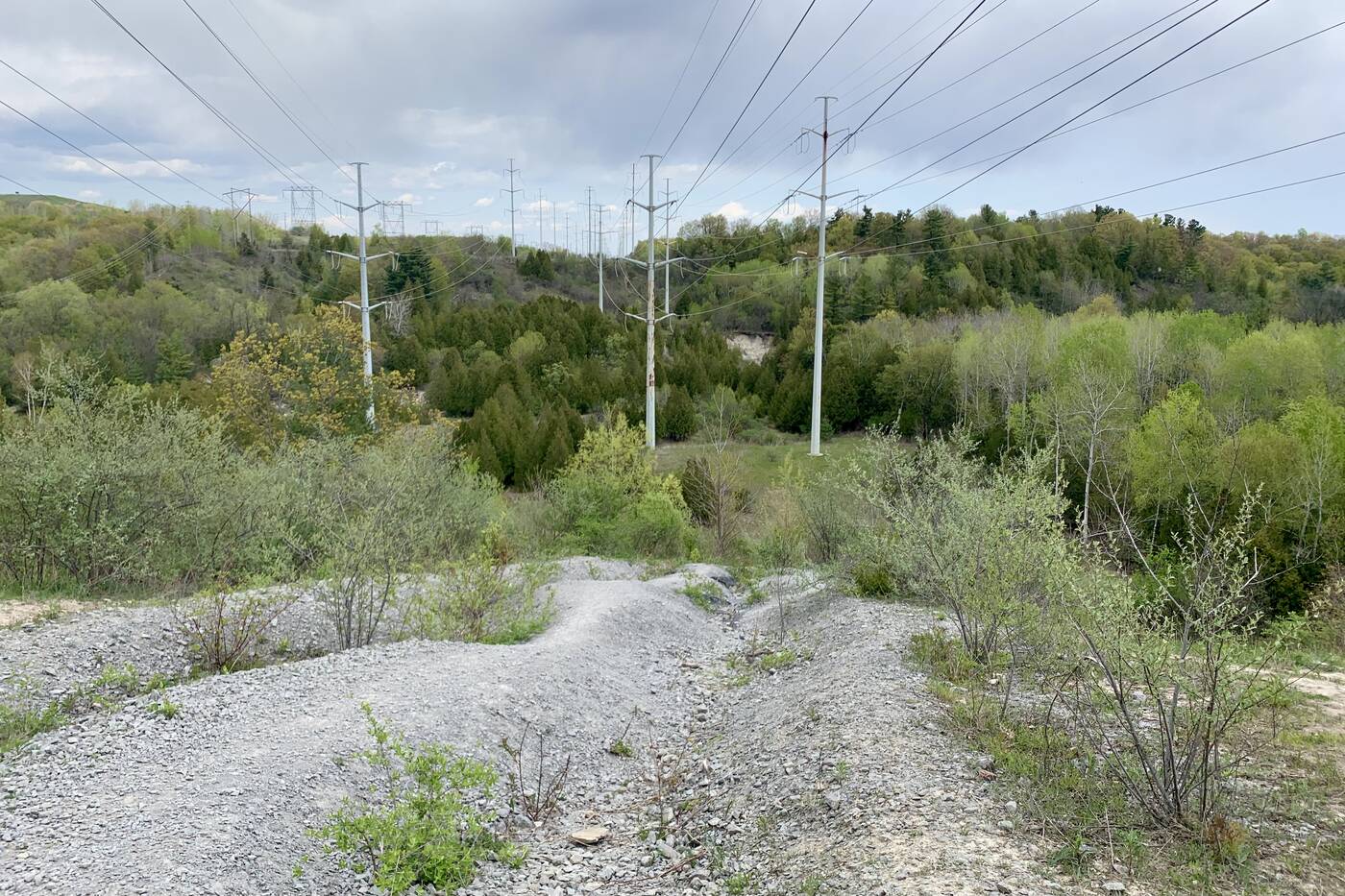 Gatineau Hydro Corridor power lines tower over the valley in some sections of the trail.

Although the towering trees will likely have you feeling transported from civilization entirely, the Gatineau Hydro Corridor power lines a bit further ahead serve as a reminder that city life is not that far away after all. 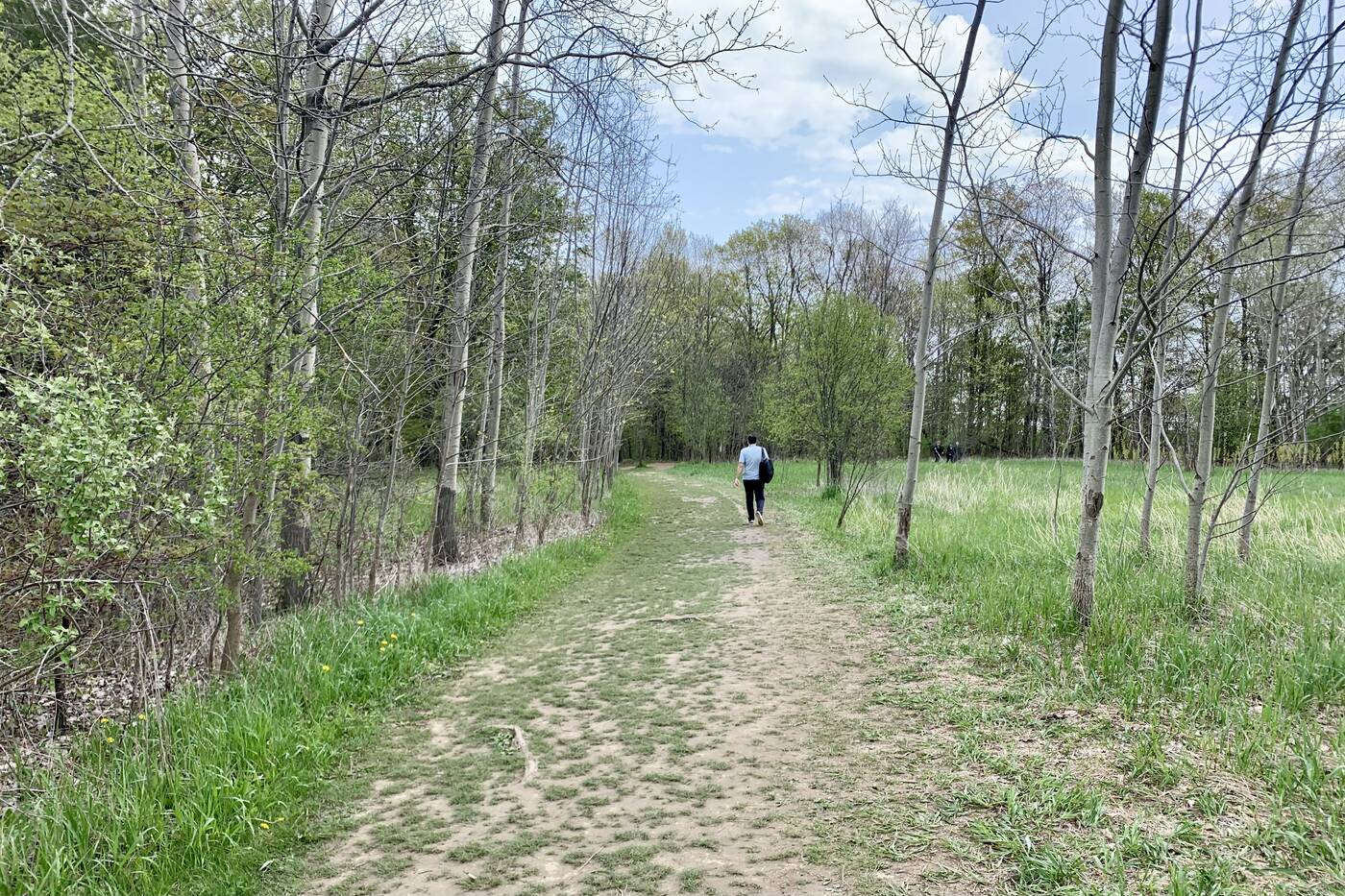 Orchard Trail and Mast Trail can be accessed from Vista Trail.

The well-marked trail continues on for 1.5 kilometres, though you can certainly extend that walk with a connection to Orchard Trail or Mast Trail, which continues to Glen Rouge Campground. 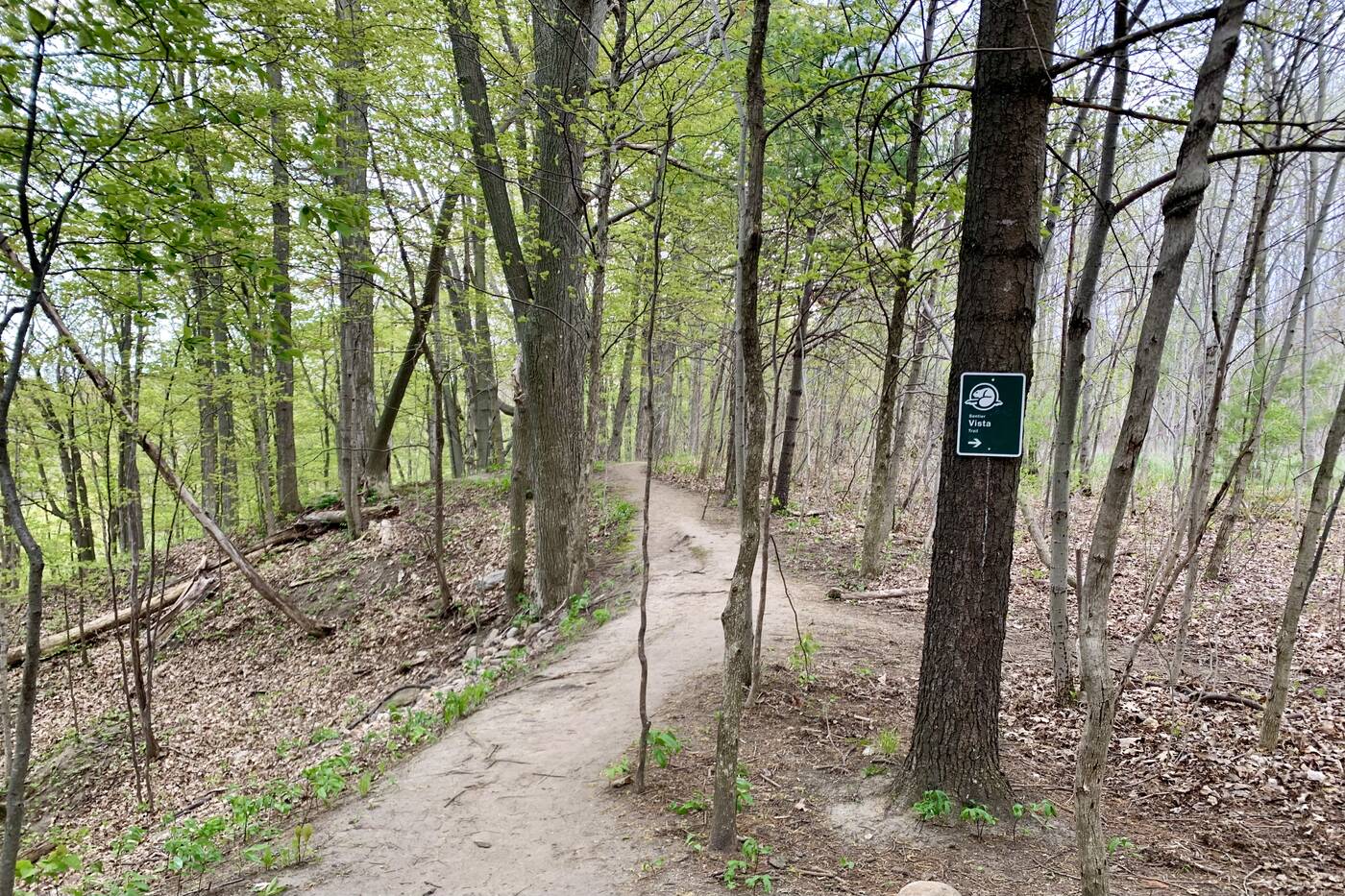 The trail comes well marked to keep you on track.

With the valley formed during the last ice age, there are plenty of deep dips, rolling hills and grooves in the landscape due to retreating ice. The dirt pathway (that's sandy in several sections) elevates you high above the valley floor providing all the vantage points. 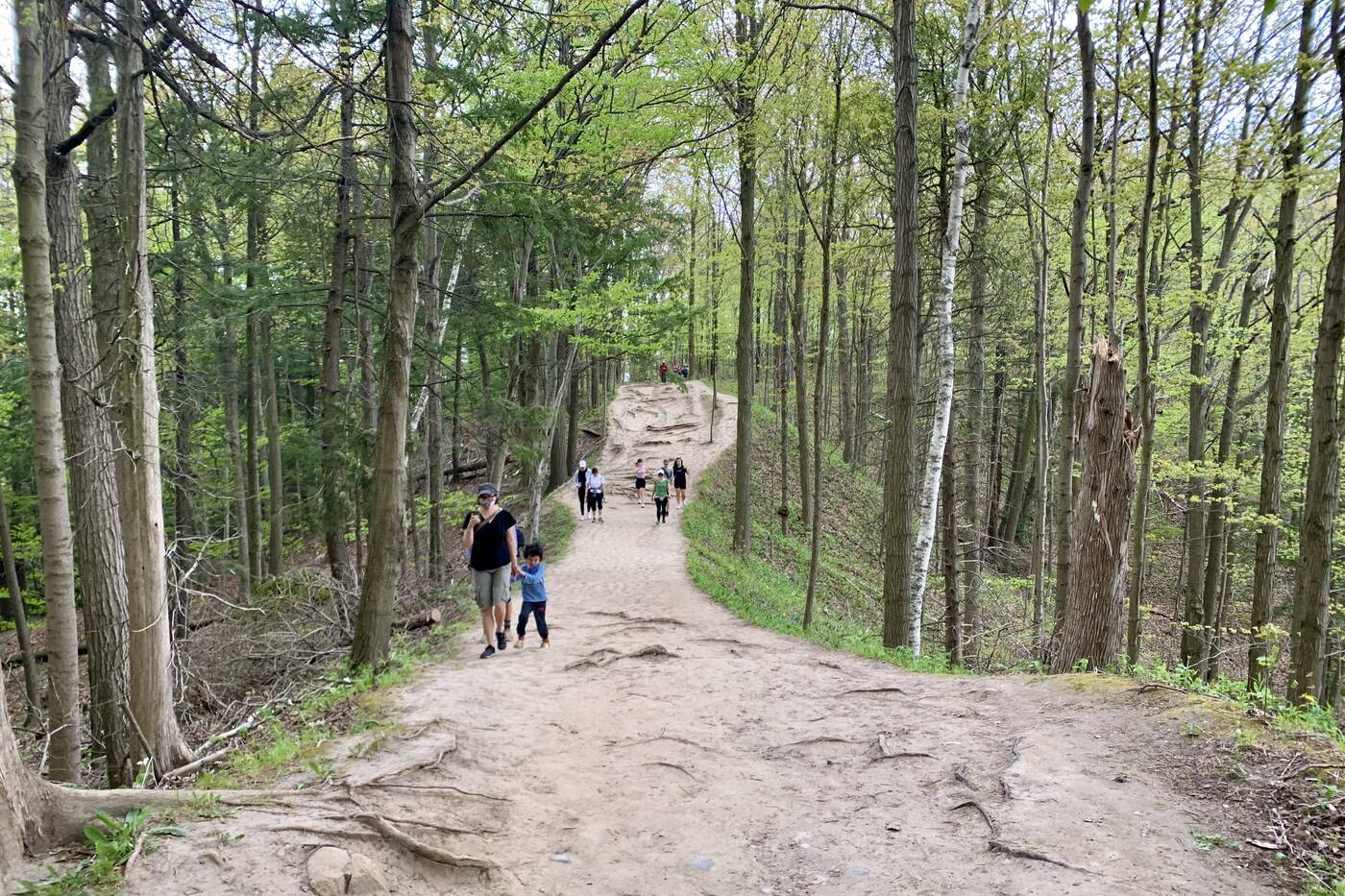 The trail rolls over hills and winds through the forest with two steep cliffs on either side.

The trail rolls over hilly sections and features tree roots forming a nicely placed natural staircase as it winds through the forest with two steep cliffs on either side. 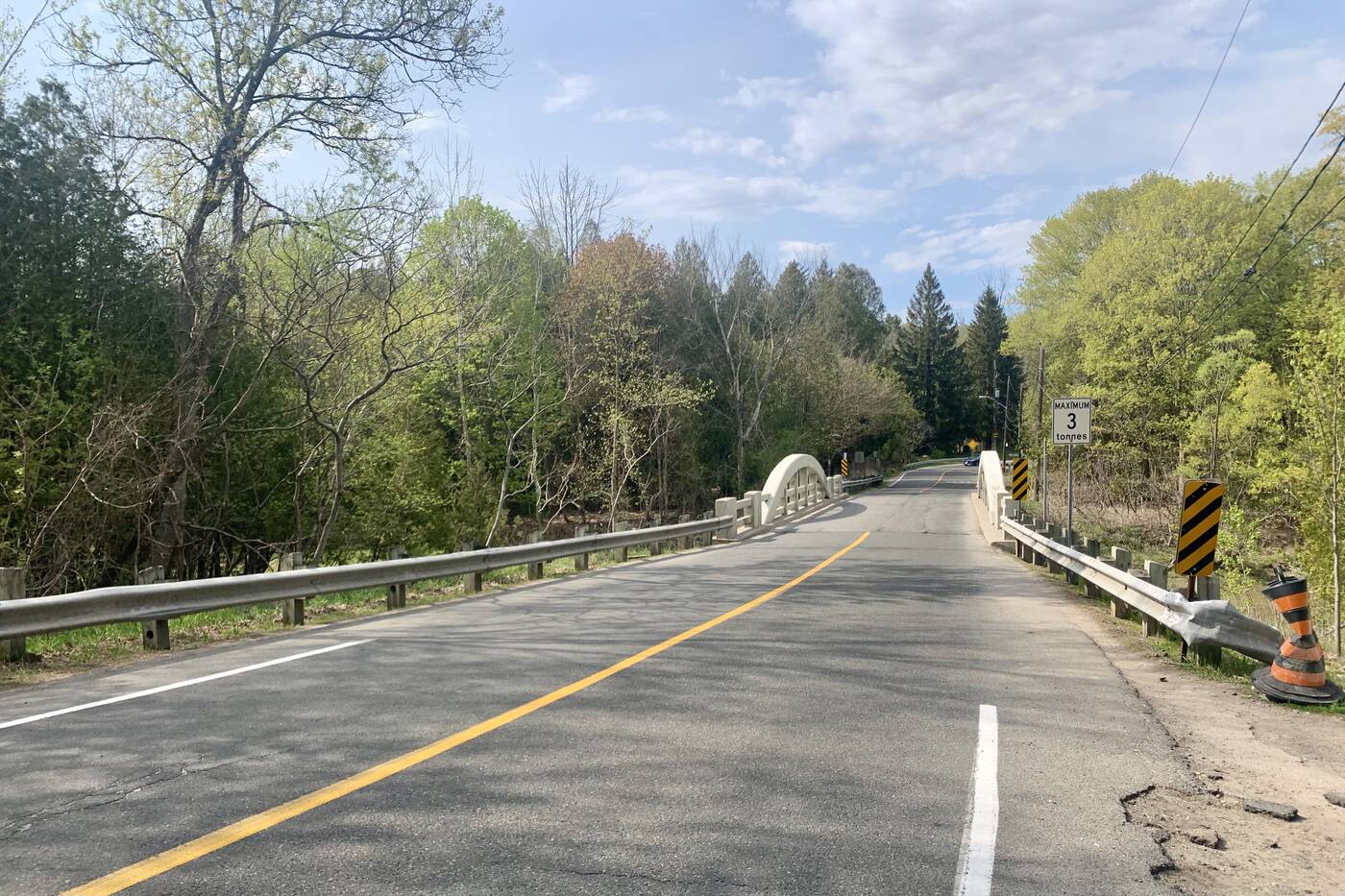 Cross the street at Twyn Rivers Drive to continue along Mast Trail.

Twyn Rivers Drive, which makes for a picturesque drive for another day, separates Vista Trail and Mast Trail and marks the end of your one-way journey on the trail. 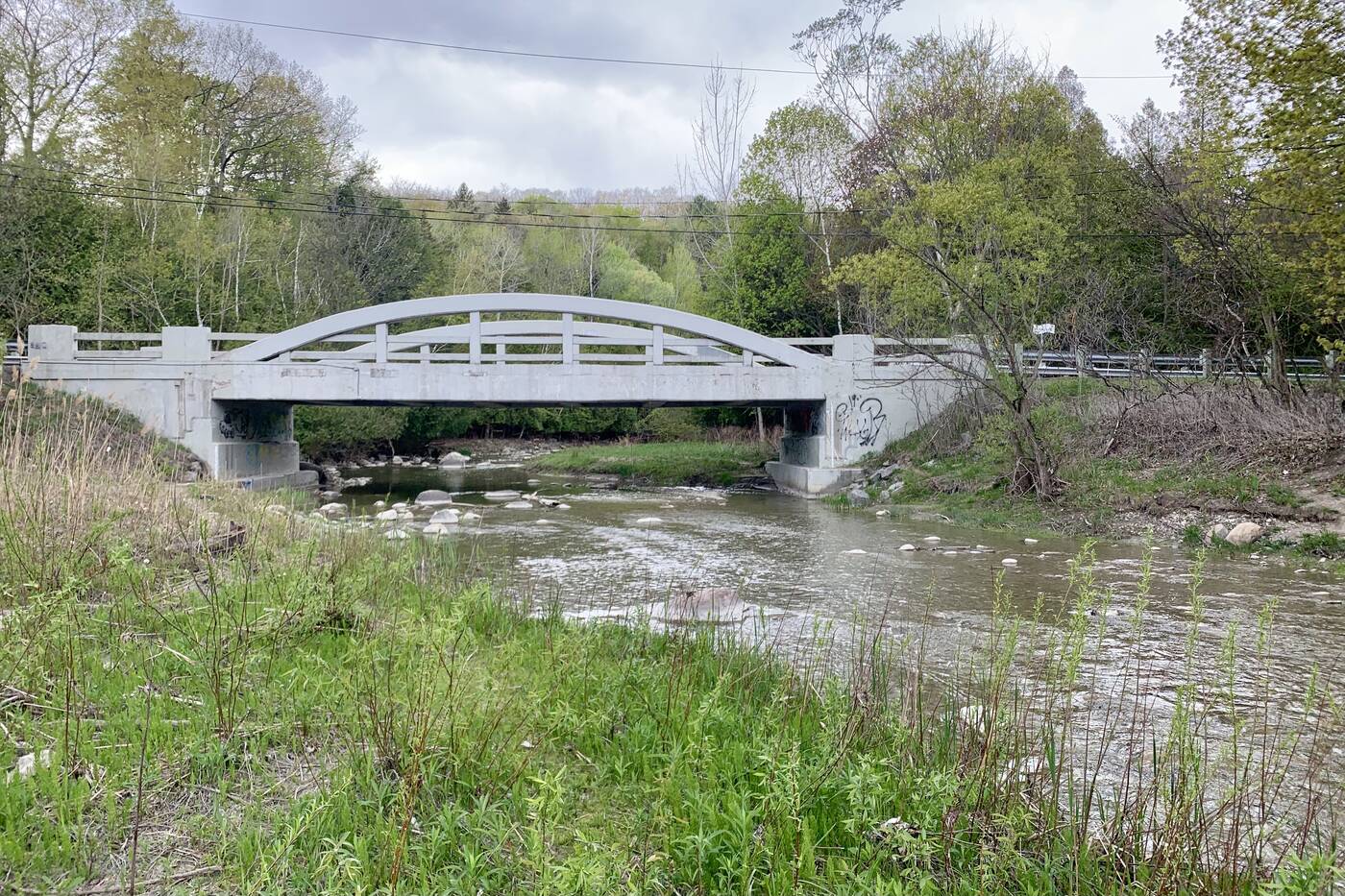 There are river views across the street.

Even if you're not looking to continue on much farther, pop over to the other side of the street briefly to take in some views of the creek flowing under the concrete arch bridge from the riverbanks.