The subject of how to improve, protect and better utilize the Toronto Islands is once again making its way to the forefront of public discourse, as it has perennially for the past 100 years (and likely long before that, too).

With the City of Toronto now formally developing a master plan to "establish a new vision" for the sprawling urban park, interesting concepts for the next iteration of our beloved main island drag are emerging all over the place.

Nearly 150 crowd-submitted "big ideas" for transforming the public lands are featured on the City of Toronto's website, generating some 75,000 ratings and 900 comments between them.

Compiled early last summer, these strategic ideas will help the city determine its eventual vision, values and guiding principles for the future Toronto Island Park. Several concrete "concepts" stemming from public feedback are expected to be ready by the end of November.

Thousands of you shared your experiences & vision for Toronto Island Park! By doing so, you are helping to co-create the #TOIslandPlan.

While Phase 1 is almost complete, stay tuned for more ways to get involved in shaping the future of this special park: https://t.co/fvCriMcVzk pic.twitter.com/dNvDeTA58Z

"Concept plans or demonstration plans are a way to share ideas that relate to the proposed physical improvements to Toronto Island," reads the city's Toronto Island Park Master Plan microsite.

"They may include recommendations towards improvements for specific areas on the Island or for roll-out across the Island."

Beginning in December, staff will be tasked with finalizing a preferred concept plan for the park. By June 2022, a final draft of the Master Plan should be in place.

This is all to say that an overhaul is coming, and plans for that overhaul are scheduled to be solidified in less than one year. It's a good time to think about what the Toronto Islands could and should be at this point in time, given that there's an actual chance for ideas to be executed.

University of Waterloo architecture student Adam Cohen is one person with some very big ideas that he says could enliven the space for humans while also enhancing landscape conditions for local ecology to thrive. 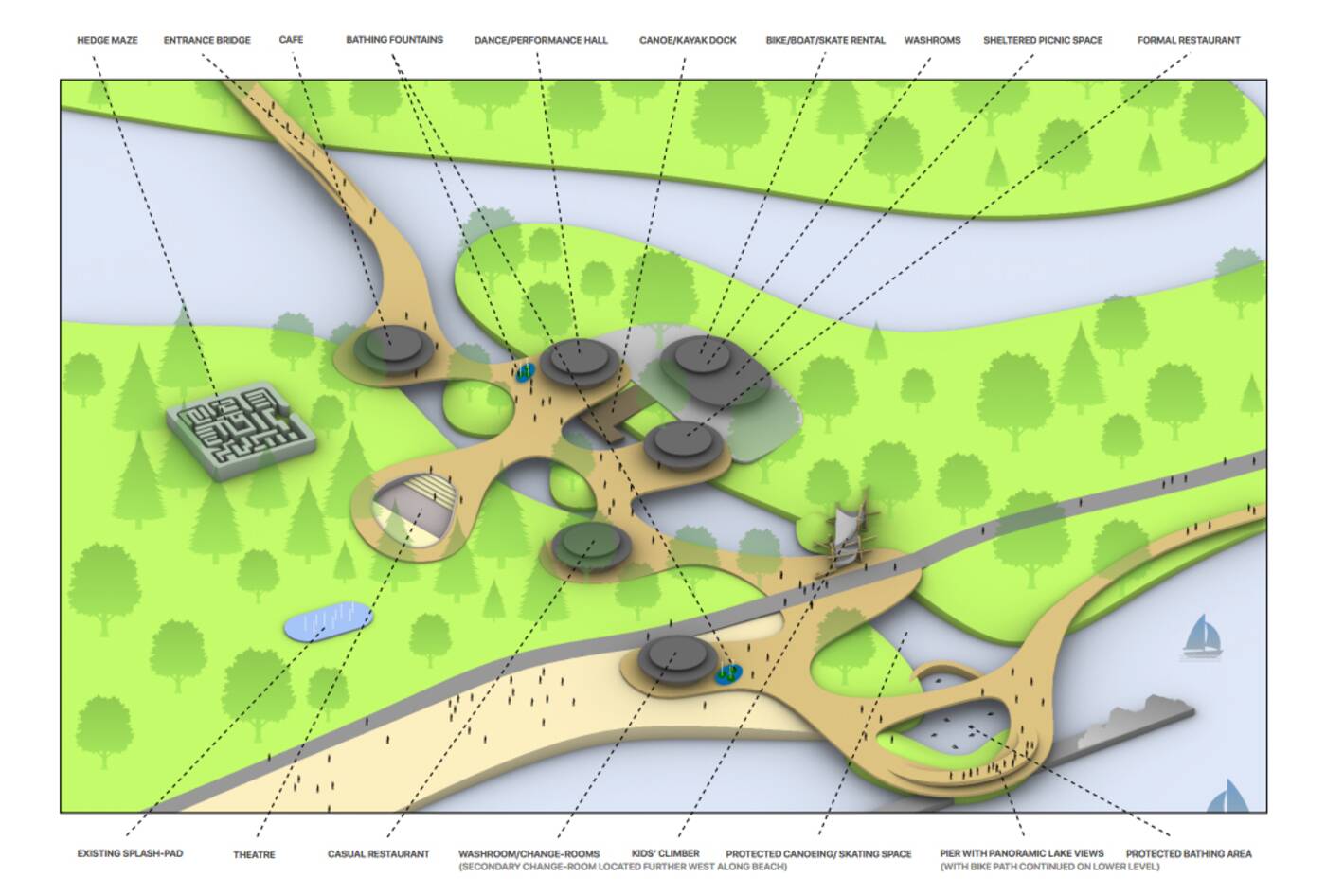 Adam Cohen's vision for the Toronto Islands includes a sweeping, elevated boardwalk with dedicated a dedicated bathing bay, among other features. Image via Adam Cohen.

"Since their initial formation about 4000 years ago, the Toronto Islands have existed in a state of constant geographical change," reads a presentation created by Cohen as part of a university architecture studio course at UWaterloo.

"Prior to colonization, the Toronto Islands were a pristine and ecologically diverse space, known to indigenous people as a place of rest and relaxation. As the city of Toronto grew, the Islands became increasingly environmentally degraded, but gained a thriving community of full-time residents and a booming tourism presence."

Cohen explains that life on the island early last century was "centred around a lively car-free main street known as Manitou Road."

Manitou Road was demolished in the 1960s to make way for the concrete plaza that stands at the centre of the park today — a decision, says Cohen, that "would effectively strip the island of its bustling heart for the next 60 years." 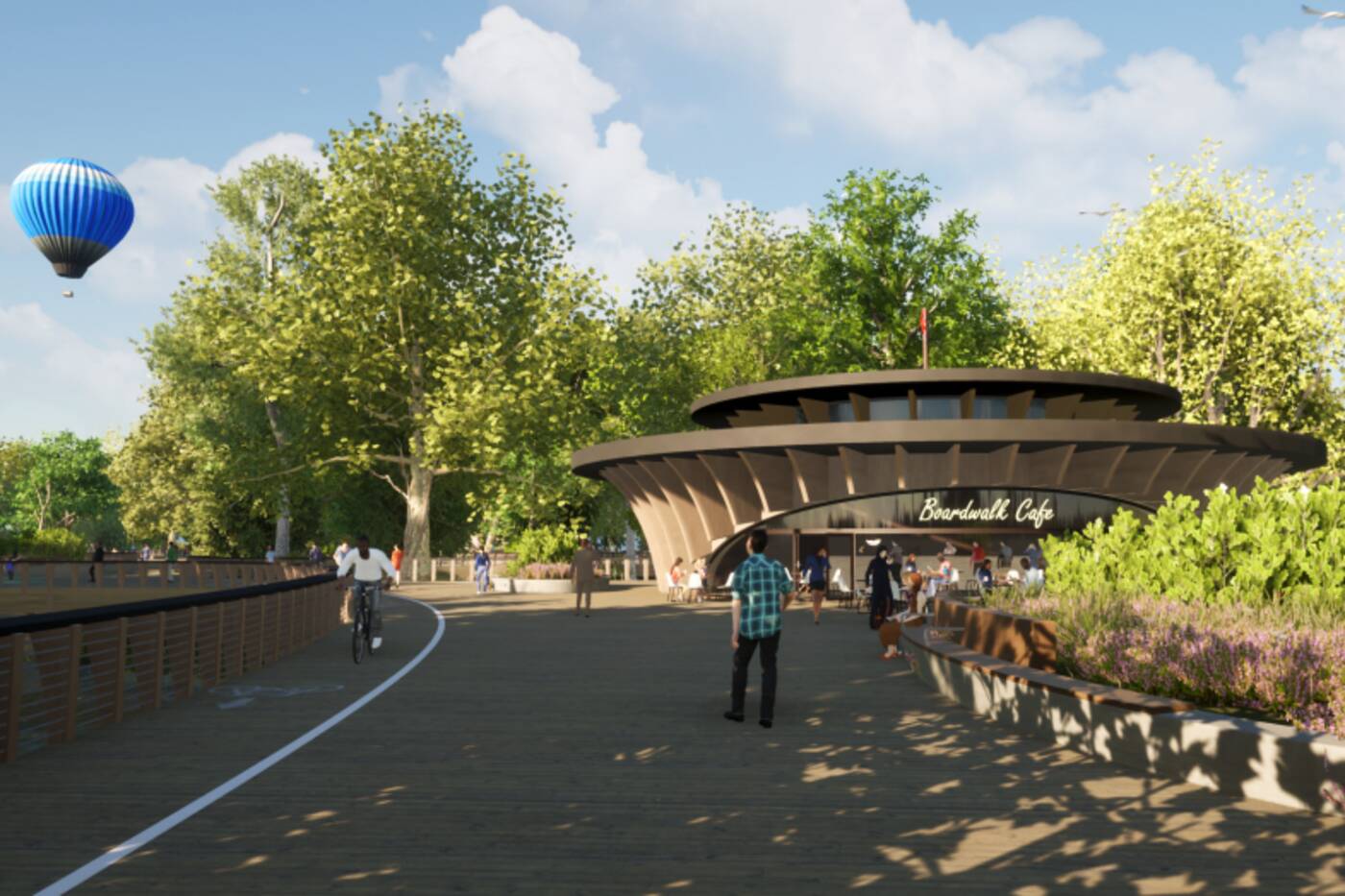 New bike paths following the perimeter of the boardwalk would allow cyclists to experience the island in a way similar to Vancouver's Stanley Park, without interrupting pedestrians. Image via Adam Cohen.

Tasked with reimagining the park's central plaza for a new generation, Cohen set out to bring back that bustling main street vibe with a new pedestrian avenue "created by extending the existing island boardwalk through the site, forming a continuous path between the ferry dock, the plaza, and the islands’ main residential neighbourhood."

A channel would also be carved directly through the site to allow small watercrafts to pass through and create new shoreline space for indigenous flora and fauna.

"Tasked with reimagining the park's central plaza for a new generation of residents and visitors, I began by examining possibilities for reviving programatic vibrancy while enhancing landscape conditions for local ecology," reads Cohen's proposal. 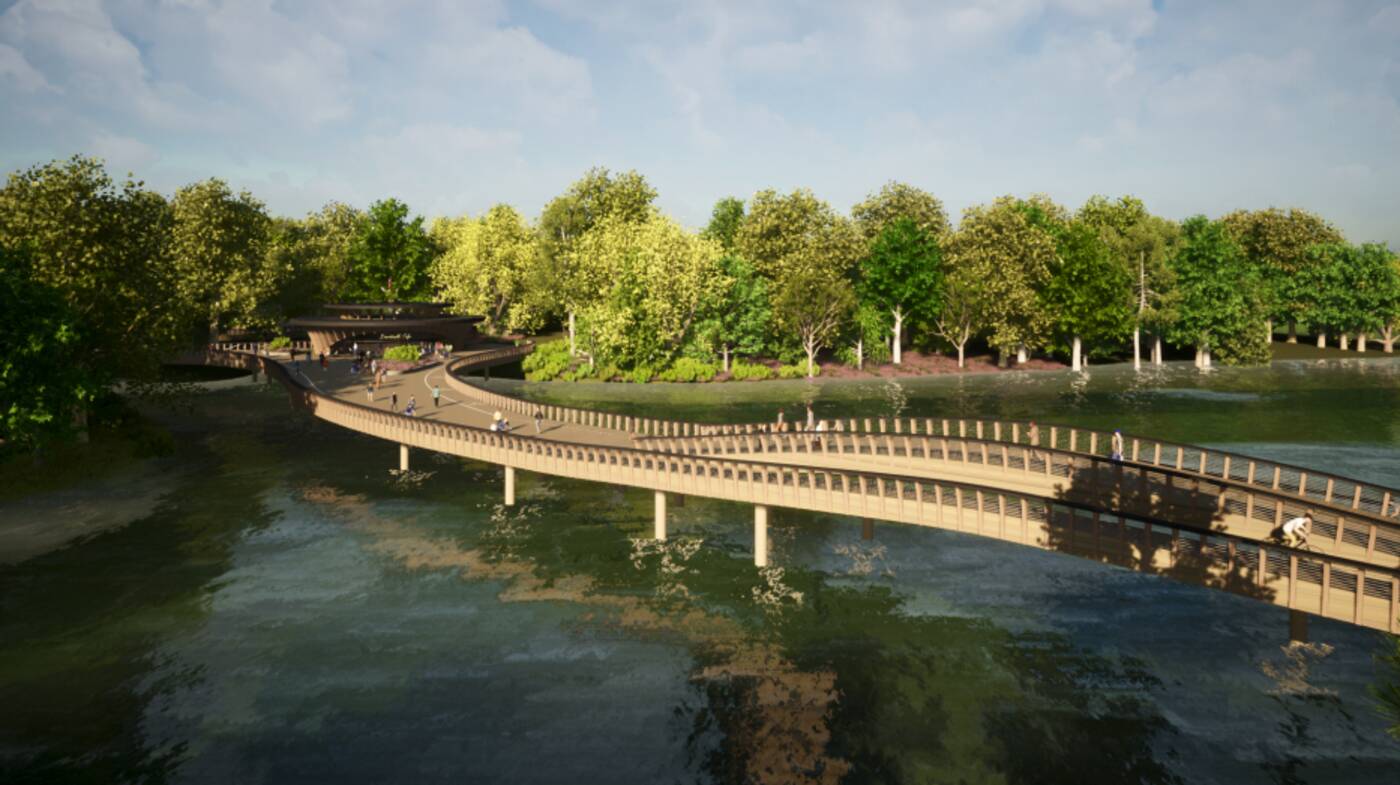 Large gaps along the shoreline would allow island wildlife to thrive while letting people pass by overhead. Image via Adam Cohen.

You can see Cohen's full vision come to life through renderings in this video, but in essence the vision is to create a huge boardwalk that bulges out strategically toward existing park features (splash-pads, the hedge maze, the beach, etc.) while better connecting people to the natural landscape on either side.

Some of the many cool features include flowerbed planters with integrated benches, dedicated boardwalk bike paths, and a unique thermal comfort system involving man-made clouds.

"Deep building overhangs ensure shade is only ever a few steps away, and man-made clouds fill the boardwalk with refreshing misty air on the hottest days of the year," writes Cohen. "During winter, a layer of coniferous trees shield the site from prevailing winds, and expanded indoor space gives people somewhere to warm up."

"The central channel is highly protected from both strong breezes and powerful water currents, making it an ideal space to enjoy skating in winter, or learn to canoe in gentle seasons." 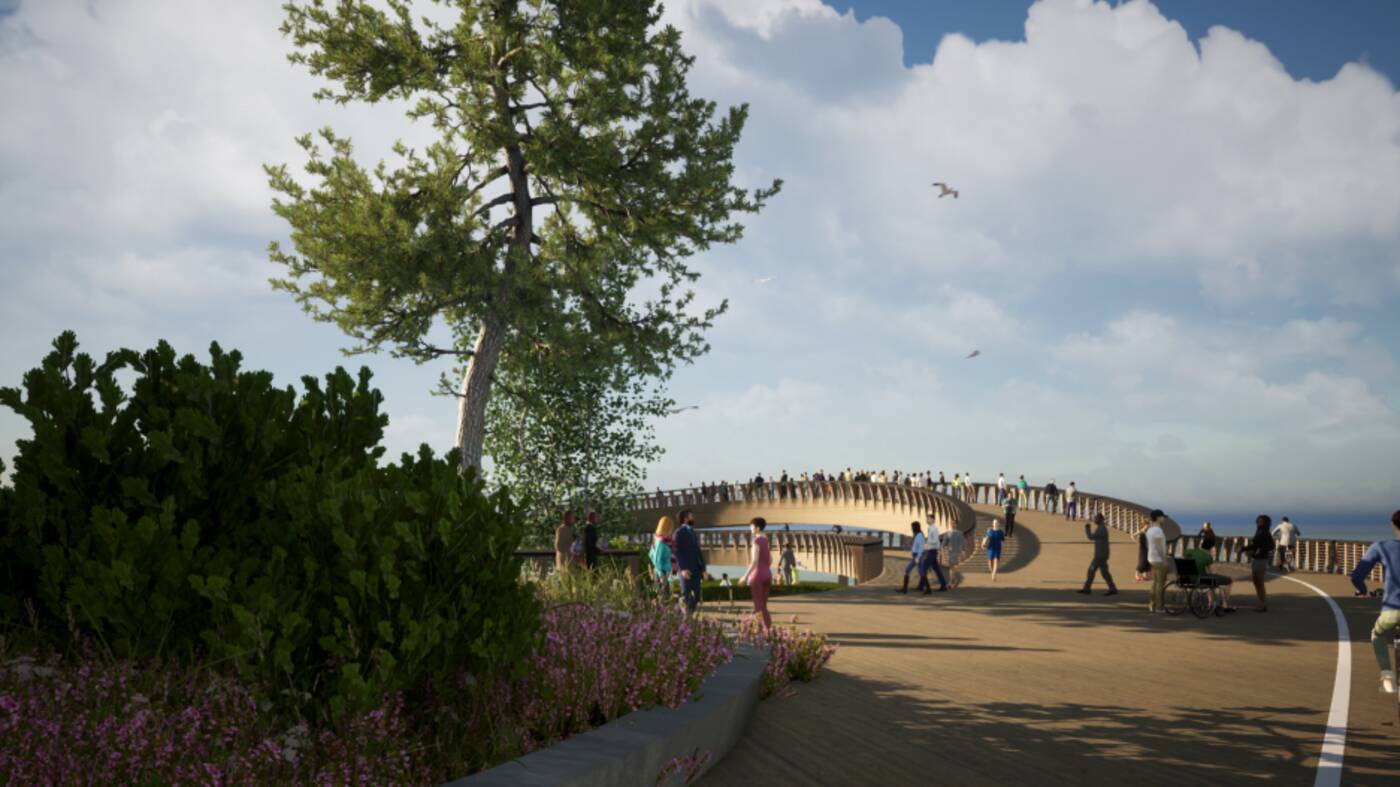 While it's only a concept at this time, Cohen presents some interesting ideas that do line up with many of the suggestions submitted by Toronto residents during Phase 2 of the master plan's development.

"In an ideal world of course, I'd love to see the project built," the second-year architecture student tells blogTO.

"I wanted to present it with straight forward diagrams and realistic rendered drawings because I'm hoping it will inform the conversation around the islands' ongoing master plan development."