The idea of building a fixed link between mainland Toronto and the city's beloved network of nature-filled Islands has been the subject of recurrent debate for more than 120 years now, and yet, residents without the means for water taxi or ferry tickets remain unable to access the park.

Local architecture firm RevelHouse is the latest group to try and democratize access to the Toronto Islands by way of a permanent bridge — an idea that has been proposed and somehow shot down many times in the past.

This time around, though, things could be different: The timing for a bridge to the Islands may finally, at long last be right.

Not only has the pandemic illustrated how crucial outdoor public space is for the health and well-being of residents, the City of Toronto just started developing a master plan to "establish a new vision" for the sprawling urban park.

RevelHouse, which bills itself as a firm "dedicated to designing engaging social spaces," saw a prime opportunity in the confluence of these events.

With 1.5 million people visiting the Toronto Islands each year, the new vision for the park will include improvements to the user experience, four-season access, connections, park programs amenities and more.https://t.co/4367VFfF7a

"While the underutilized Toronto Islands are going through a Master Planning exercise, it is time to push for an inspired fixed link," reads a brief proposal for a bridge project titled "Democracy Comes to the Island."

"This structure can be and easy way for pedestrians, cyclists (and potentially service vehicles) to access the Island's parks without needing to use the inconvenient ferry system," the proposal continues, noting that the bridge could serve as "a desired amenity to the redeveloped Port Lands as they come to life."

The proposed structure would run across the harbour's 200-metre-wide Eastern Channel, from the Port Lands to Ward's Island, with a swing bridge included to accommodate commercial vessels.

"We believe that amidst the global pandemic, outdoor public recreation and bike space is more important now than ever," said Intern Architect Joseph McBurney to blogTO of the proposal.

"The Toronto Islands present an amazing opportunity to address this by making them more accessible and convenient than ever." 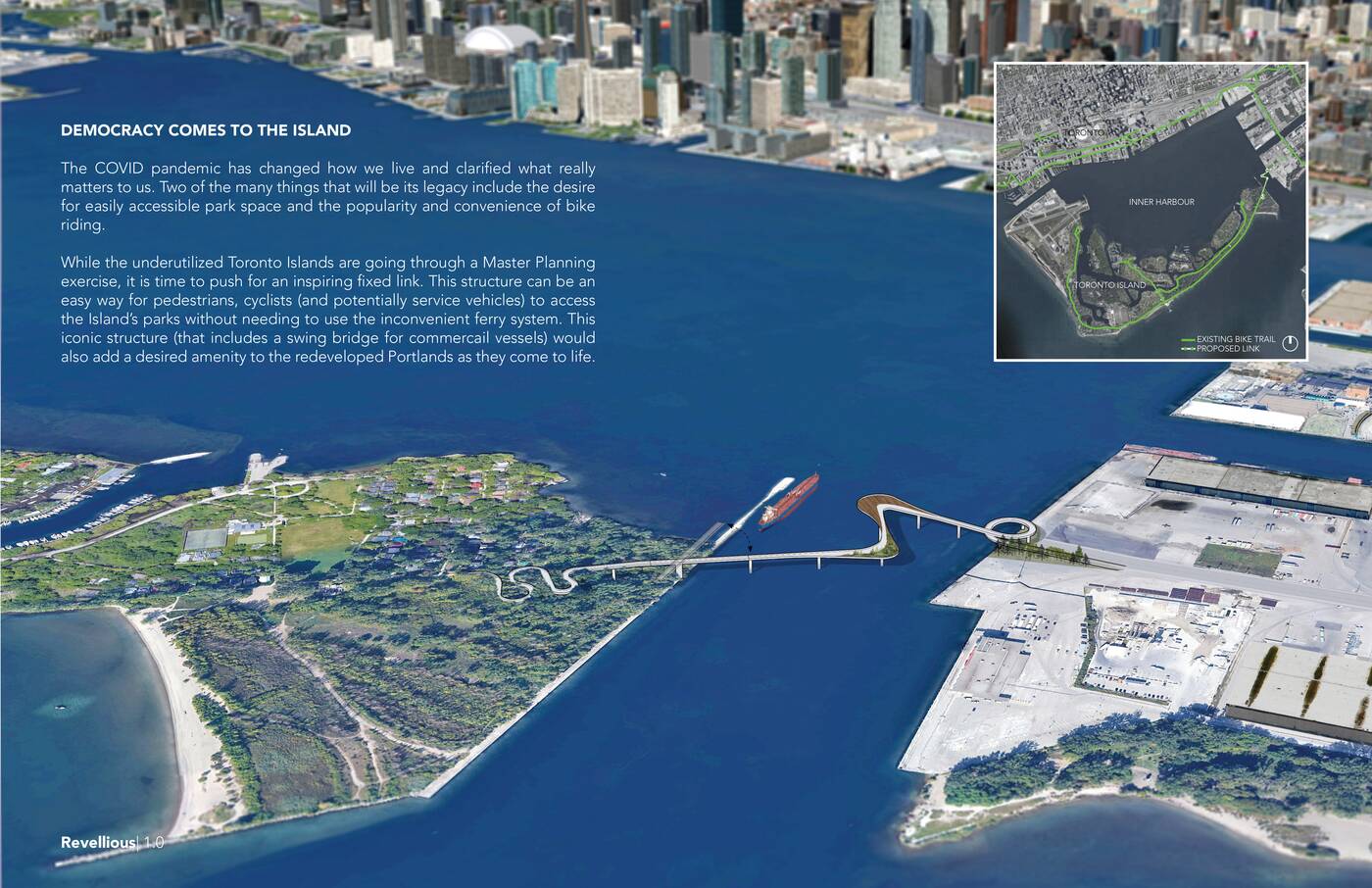 RevelHouse Principal John Plumpton explained that, while the scheme is still an early concept, he thinks that the Islands bridge would be a desirable — albeit complicated — project.

"Building a bridge is a long process. It would require approvals at many levels, environmental studies and engineering to ensure it is safe and efficient for the recreational and commercial use it is intended for," Plumpton told blogTO.

"I can't see it being a quick process, but like all major infrastructure projects, there is no time like the present to get it started."

Somehow, despite consistent demand for it throughout the Island's 162-year-old history, the city has yet to build a bridge or public access tunnel from any point along the waterfront.

The one exception to this, of course, is a privately-funded pedestrian tunnel built in 2015 exclusively for passengers flying into and out of Toronto's Billy Bishop Airport on Hanlan's Island.

What we know from the construction of that tunnel is that such a project can be completed in a reasonable amount of time. The biggest hitch? Getting approvals to build something in the first place.

"To get started you would need to build consensus support from all the stakeholders — the City, Waterfront Toronto, the Island residents, etc.," says Plumpton.

"Any type of fixed link has always been controversial but I think behaviours around Covid have shown us, for many reasons, this would be a very desirable project."