Toronto could be getting a new mall underneath the Gardiner Expressway

A new plan could turn one of Toronto's most-hated barriers to the waterfront into a unique shopping destination.

After years of debate on whether The Gardiner Expressway should be torn down, buried, topped by a park, or a myriad of other options that hid away the problem, recent trends are giving people reasons to enjoy spaces under the noisy elevated route through downtown Toronto.

Known as Under Gardiner (which was also the early working title of The Bentway) the plan would bring four new retail buildings to space below the Gardiner. The group of two-storey retail buildings, all joined together by a massive underground food hall and event space, would be constructed around the highway's supporting columns.

Along with 5,509 square metres of commercial space, the project would create a new 580 square metre square public space that doubles as a long-awaited pedestrian connection between the heart of the CityPlace neighbourhood and the waterfront to the south.

This highway-sheltered, outdoor space is sure to become a popular local hangout, planned to include walkways, interactive landscape elements, and public seating. A pair of outdoor courtyards are planned between the retail buildings to the east and west. 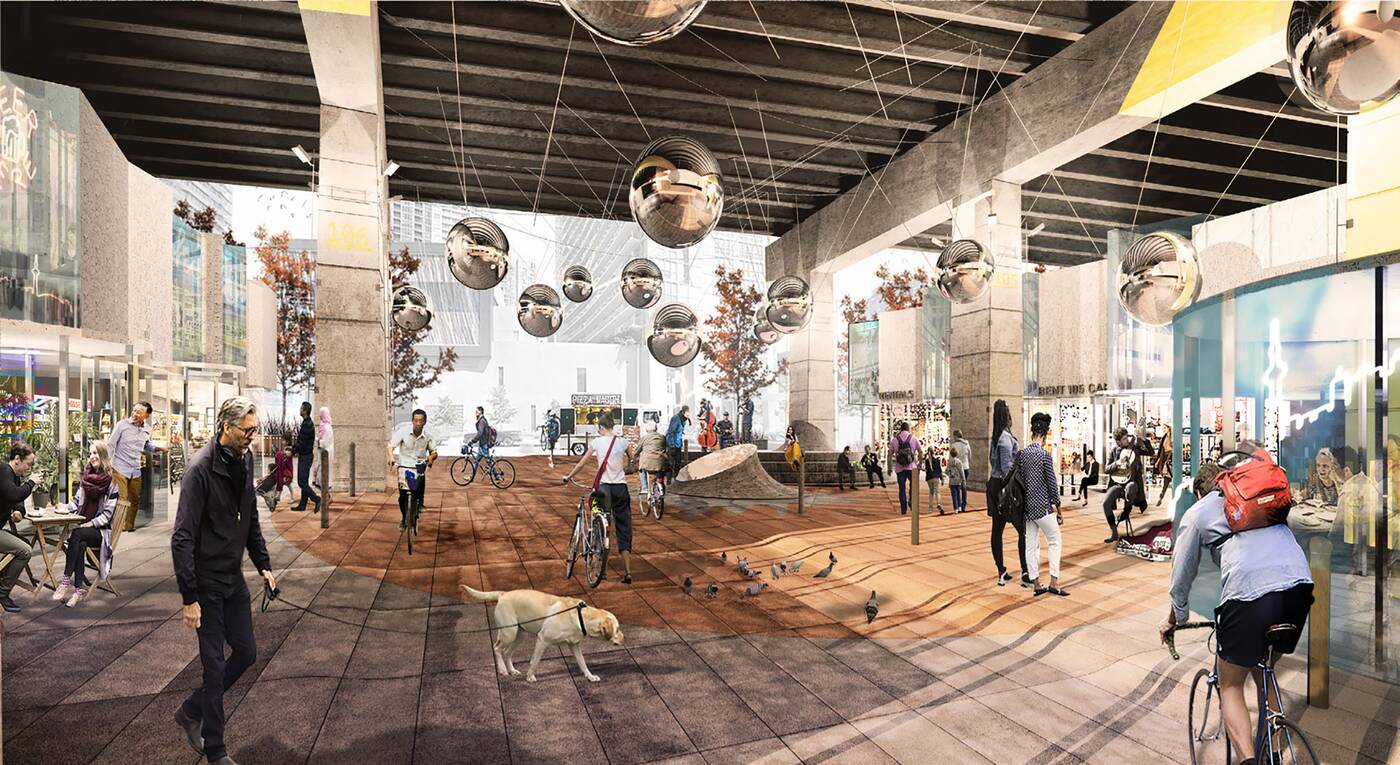 Now-popular spaces like The Bentway and Underpass Park set the stage for this latest proposal. The developer, Concord Adex, has already utilized space under the Gardiner just next door, with an LCBO location and an outdoor art installation animating the underside of the expressway east of Bathurst.

Like these spaces that came before, the project intends to embrace the highway above rather than minimize its presence. Walkways would wrap around the prominent expressway supports, and their foundations would be left exposed.

While no buildings currently exist on the mall's proposed site, an art space known as Mitosis Courtyard by Pierre Poussin — commissioned by Concord Adex as part of the CityPlace Public Art Program in 2010 — would be displaced by the project.

A quote from the project's planning report explains the justification for replacing this art, stating "Unlike other destinations located nearby and under the Gardiner such as The Bentway and Underpass Park, the space is not seen as a destination and is mostly utilized as a mid-block connection between Lakeshore Boulevard and the main areas of CityPlace further north and west."