New proposal imagines a linear park atop the Gardiner

In an extremely tight vote last June, Toronto City Council opted for the hybrid option in regards to the Gardiner East. Many downtown councillors, however, advocated to completely tear down the highway and replace it with a ground-level boulevard. While that won't happen, there are still some rather innovative proposals on the table for a stretch of the Gardiner between Jarvis and Cherry Streets.

At a meeting yesterday, Toronto's public works and infrastructure committee looked at three alternative hybrid design concepts based on the original on council voted on.

What has received much less discussion, however, is the stretch of the Gardiner east of Cherry Street. This is where there might be potential to do something spectacular by addressing Metrolinx's need to expand its railway corridor and freeing up land that could be developed. 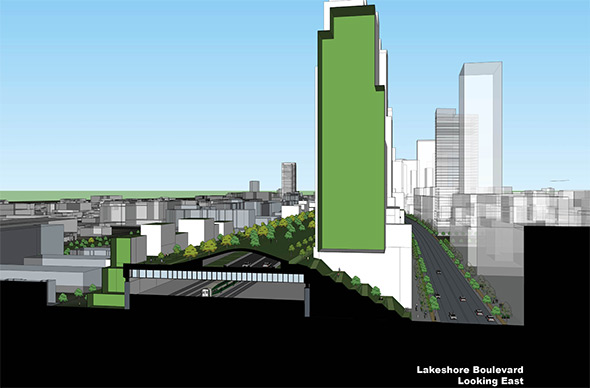 A proposal from the architectural film Brook McIlroy looks at stacking the Gardiner on top of the expanding Union Station rail corridor, which runs between Jarvis and Cherry street, and creating a green space above the roadway. 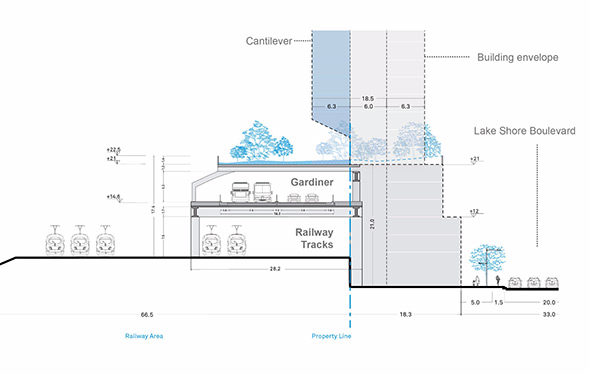 John Lorinc, for Spacing Magazine, writes: "If the City and Metrolinx can align their construction agendas... they could expand the existing berm south to create not only additional track space, but a deck above the new tracks, upon which the four-lane Gardiner could run. The highway portion, in turn, could also be decked, creating a linear park overhead."

Brook estimates this plan would cost $316 million and would also free up 4.3 million square-feet of city-owned space. Creating a park atop the Gardiner has been talked about for years, but this proposal makes a whole lot of sense. Let's not hold our breath that it'll happen, but the city has at least commissioned a cost-benefit evaluation.

What do you think of the plan? Let us know in the comments.