My initial visit to Ontario Place was during the summer of 1971. It had officially been opened by the late Premier Bill Davis on May 22 of that year, and though I had read about it in the newspapers and viewed film coverage of it on television, it was even more impressive than I had expected.

I still remember crossing the glass-covered bridge that spanned the Lakeshore Road, connecting Ontario Place to the mainland.

The view of the city to the east and the sprawling islands of Ontario Place, set amid the blue waters of the lake, was magnificent. Perhaps the most eye-catching feature of all was the geodesic-like dome named Cinesphere. 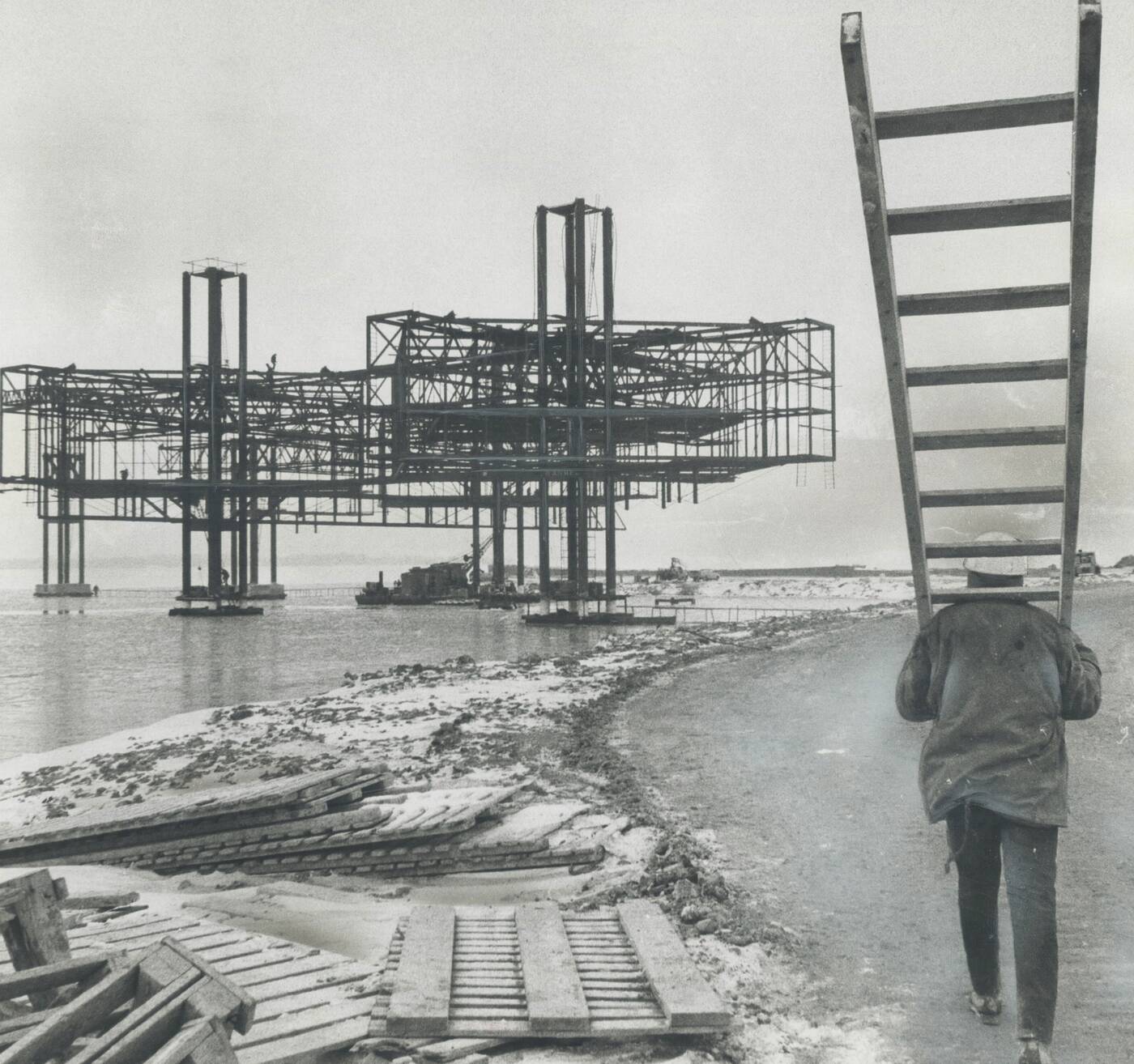 Construction on Ontario Place commenced on March 17, 1969. Three islands were built by dumping landfill into the shallow waters at the edge of Lake Ontario, to the south of the Canadian National Exhibition (CNE).

The islands were connected by bridges and walkways. Three old lake freighters were sunk on the southeast side of the park to create a breakwater; behind it was a marina.

The total size of the grounds was 96 acres, of which 51 were landfill. On the islands were five futuristic pods (buildings), designed by architects Craig, Zeilder, and Strong.

Constructed on steel stilts, the glass and steel structures hovered high above the water. They contained displays, multi-media exhibitions, and restaurants. 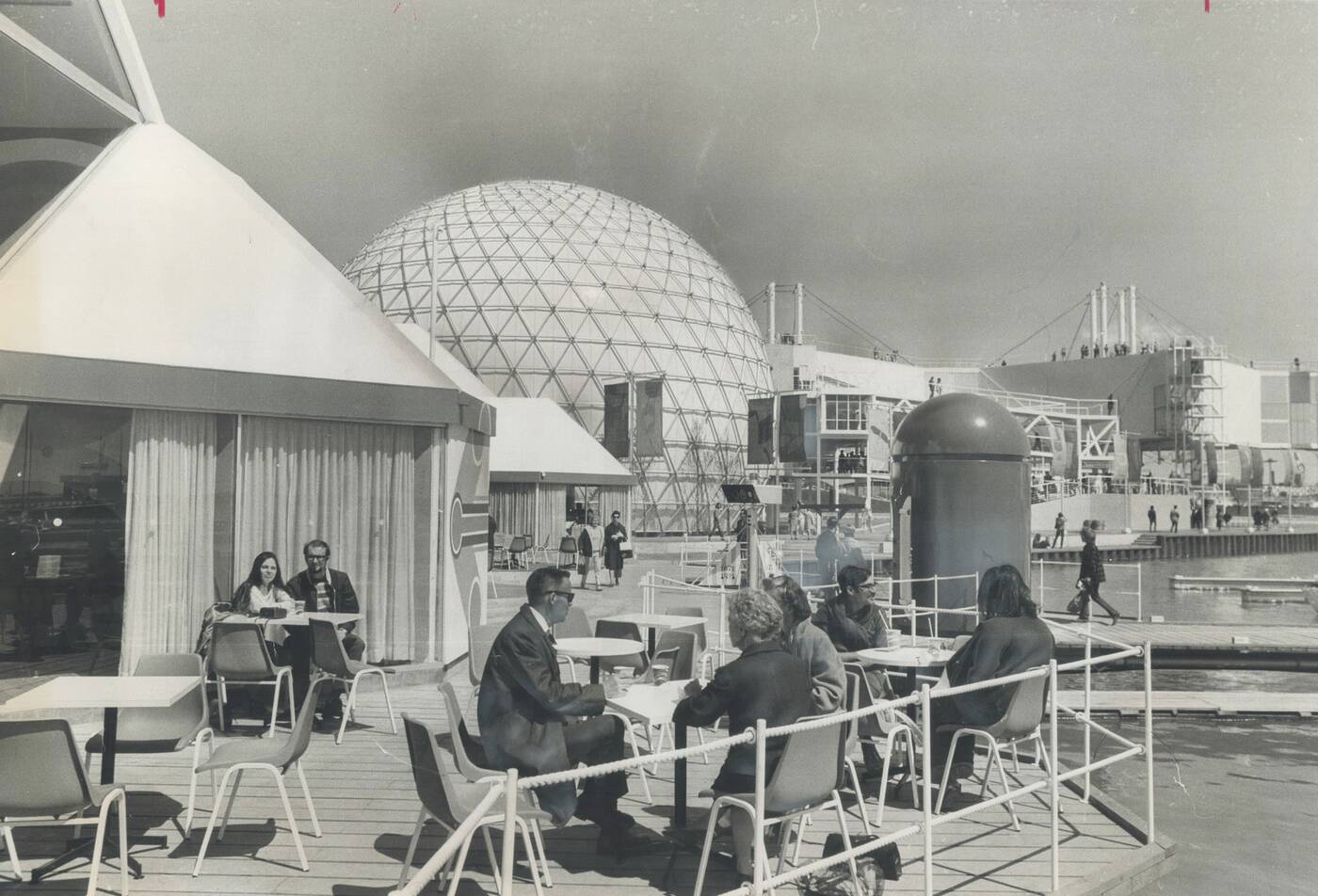 Scattered throughout the grounds were boutiques, shops, food kiosks, and pubs. Visitors were able to rent paddle boats to navigate the lagoons among the islands.

The concert venue, named the Forum, had a seating capacity of 1500, with another 8000 sitting on the hills that surrounding it on three sides. It contained a circular outdoor stage in an amphitheatre that resembled those of ancient Greece. 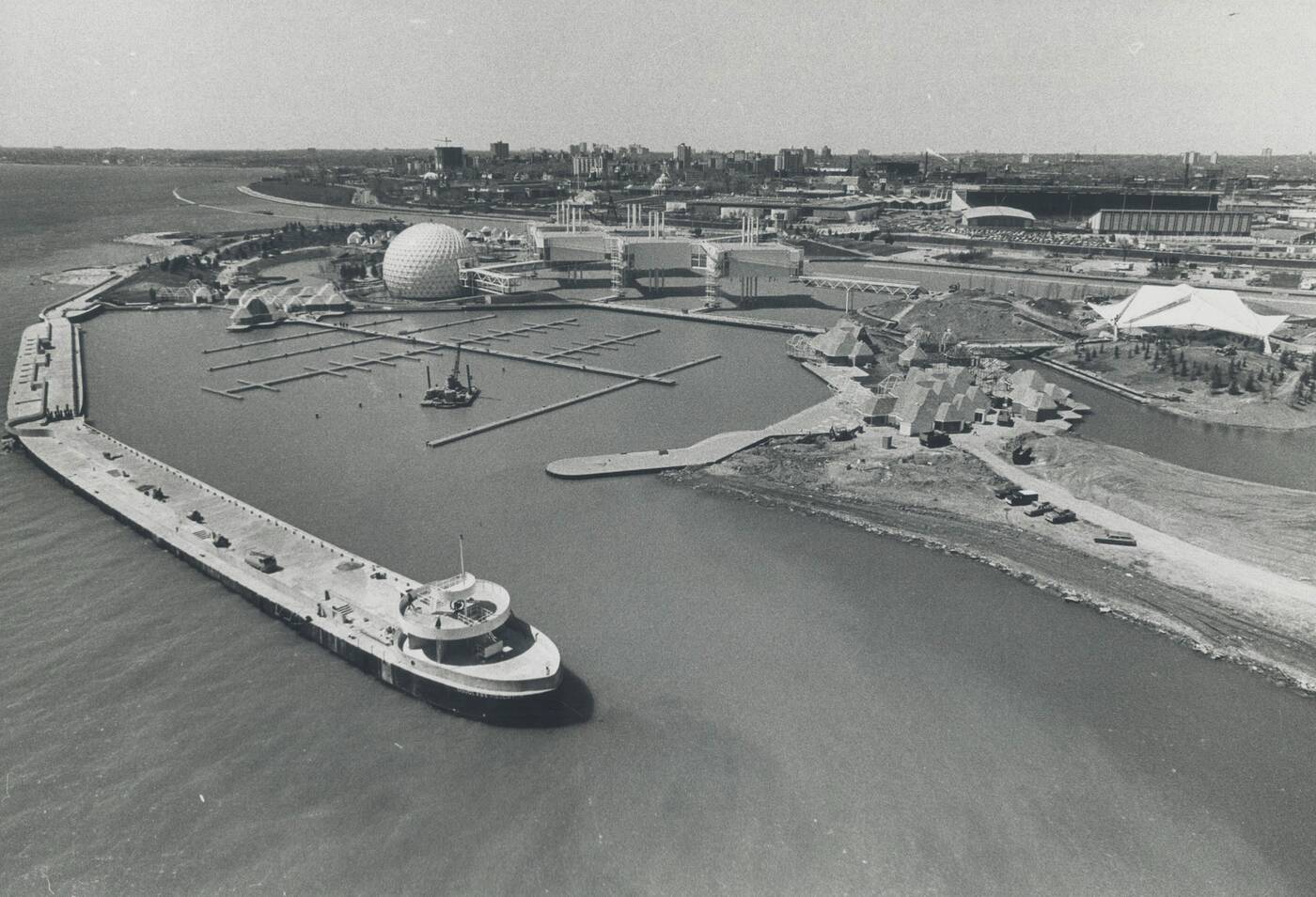 However, the one at Ontario Place had a canopied roof. Those who were unable to locate seats, sat on the grassy hill surrounding the stage.

On weekends, the Forum featured continuous entertainment, including bands, dancers and vocal performers. The total cost to the Ontario Government to build the park and entertainment centre was $29 million. 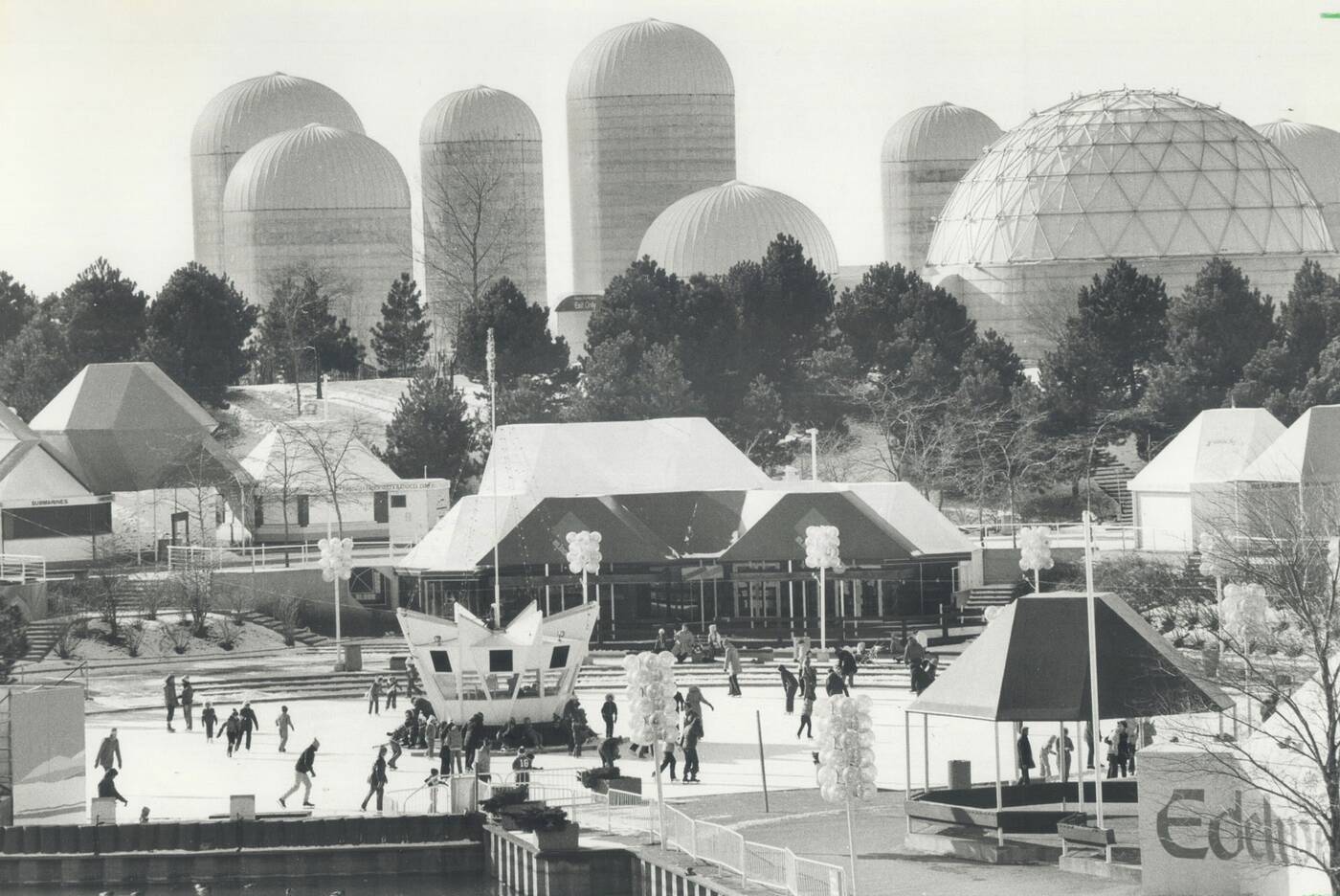 The skating rink at Ontario Place, 1980.

The enormous dome, Cinesphere, which possessed a 19-metre radius, contained a theatre with a seating capacity of 800. It was the world’s first permanent IMAX movie theatre, one of the inventors of IMAX being the Toronto filmmaker Graeme Ferguson.

Cinesphere was similar in appearance to Spaceship Earth, built in 1982 at Walt Disney's Epcot Centre. It has been referred to as the world's biggest golf ball. The curved movie screen inside Ontario Place's Cinesphere was the equivalent in height of a six-storey building.

In 1971, it screened the IMAX film North of Superior, which captured the splendour of the province's far north. The most dramatic scenes were those where the cameras, mounted in a helicopter, swept through deep valleys between the canyon walls of jagged rock, and then, suddenly soared upward over the endless forested hills and sparkling blue lakes.

It was similar to a virtual reality experience of today, as the audience was a part of the scene, travelling above the rugged landscape. People reacted by leaning in their seats, to the left or right, their movements synchronized with the cameras. They felt as though they were actually flying alongside the photographers.

When the park was officially opened, it was described as a site that would be continually changing—a work in progress. This was not an exaggeration. 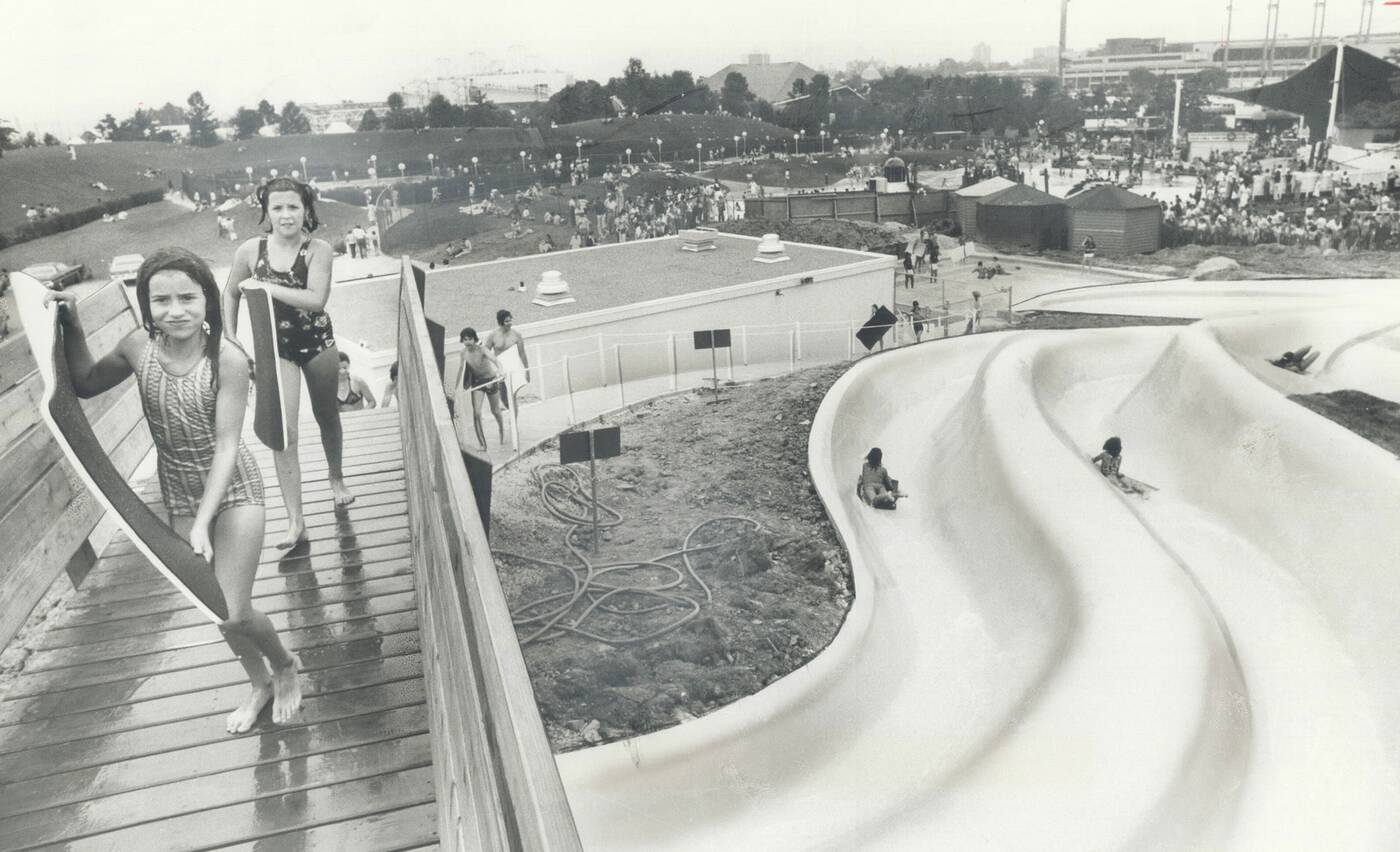 The waterslide at Ontario during the year it opened, 1978.

The following year, a Children's Village was added, and in 1973, a water-play area. The waterslide appeared in 1978, the first one built in Canada.

The same year the canopy over the stage at the Forum was replaced with one of copper. Bumper boats were also added in the late-1970s for those who wished to have fun on the water of the lagoons.

In 1980, seven tall silos, linked by walkways, were constructed on the west island. Named Ontario North, the silos displayed the wild life of northern Ontario. In 1981, a 70 mm film festival was held, and for the first time, Cinesphere screened films other than IMAX.

In 1982, Future Pod opened in Pod Five; in it were displays of the province's advancements in technology, communication and energy. It included a full size replica of the Canadarm, a robotic appendage used on space craft, in zero gravity. 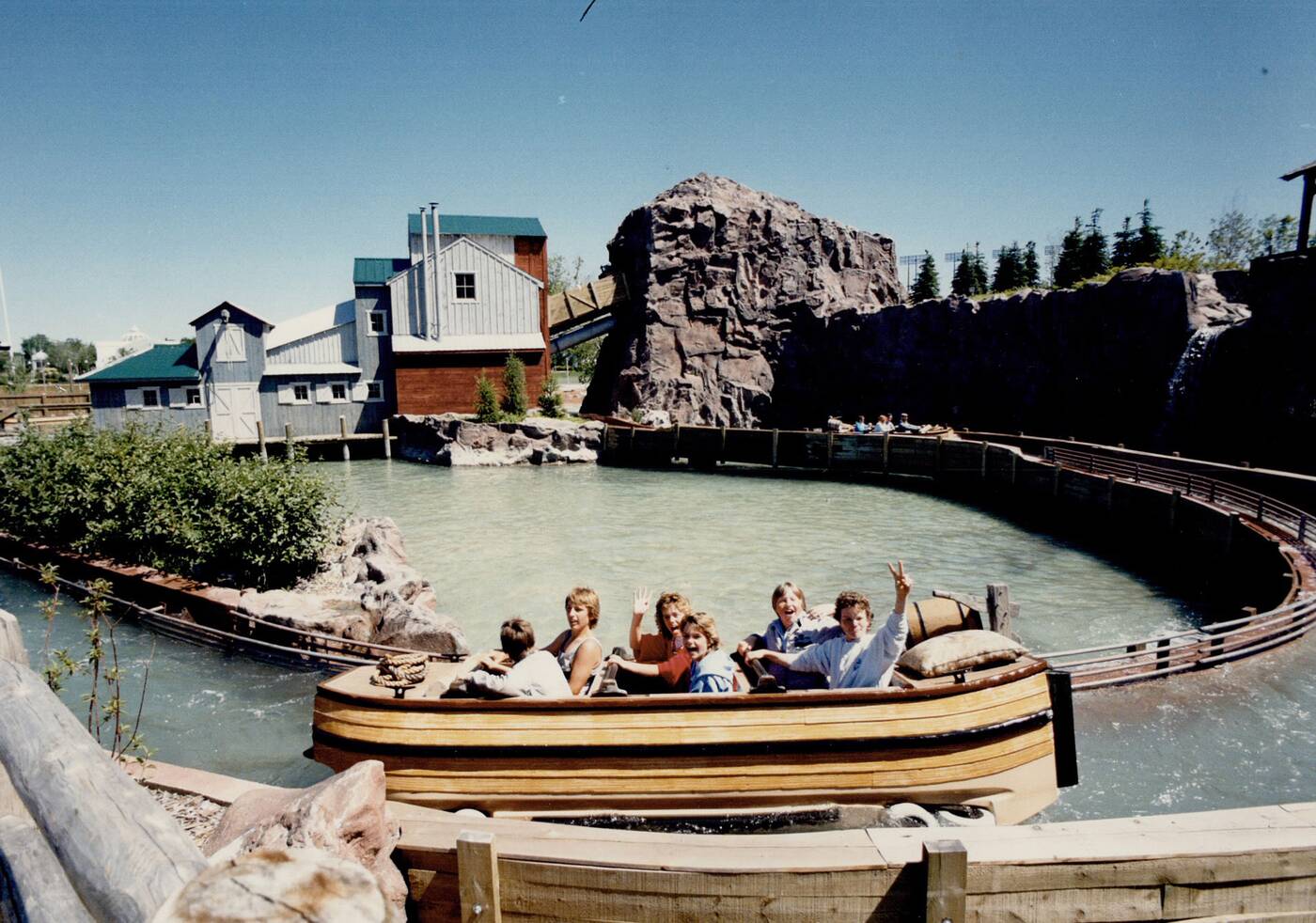 In 1984, on the west island, the Wilderness Adventure Ride was constructed. It was a flume ride (log ride) where people sat in boats that resembled large logs and were propelled down a 40-foot high narrow trough containing gushing water.

At the bottom of the trough was a pool, and when the log-boat hit it, it created an enormous splash, invariably drenching the riders.

In 1991, to celebrate the 20th anniversary of the park, free admission was offered. Also, the Festival Stage was built near the Children's Village as a venue for children's programming.

In 1992 Bungee jumping appeared for those more adventurous, but it did not become a permanent feature of the park.

During the winter of 1994, the Forum was demolished to create the Molson Canadian Amphitheatre. It seated 16,000, whereas the previous venue had held a combined total of 10,500.

It opened in 1995 and was immediately popular, despite the misgivings among many fans over losing the original Forum. 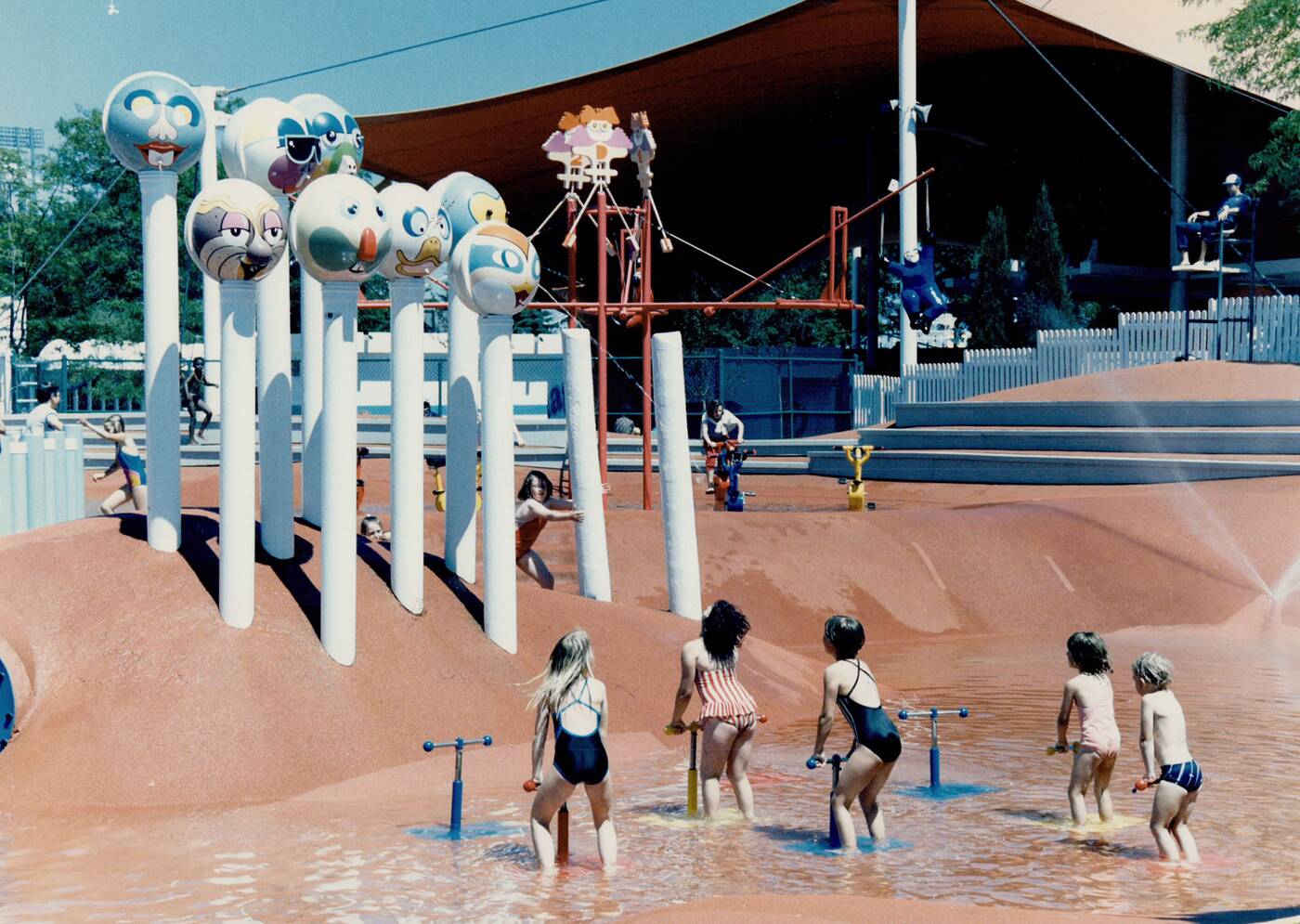 The same year, the demolition of the older waterslides permitted the building of the Rush River Raft Ride; it possessed rafts that accommodated five people. They descended from a height that was the equivalent of an eight-story tower.

The park continued to expand during after the dawn of the 21st century. Among the additions were new restaurants, waterslides, and a South Beach volleyball complex. The water in the slides was heated to provide a degree of comfort on cooler days.

In 2006, I shall never forget attending the Rogers Chinese Lantern Festival, installed on the west island. Strolling along the many pathways after dark, I marvelled at the amazing creations.

Lanterns were employed to build palaces, markets, replicas of world famous buildings, and streets scenes. There was even a huge dragon that slithered through the water of one of the lagoons.

In 2009, the section of the Martin Goodman Trail near Ontario Place was opened, creating a direct bike path along the city's waterfront to Ontario Place.

The same year, the Event Tent in Market Square was altered to become Heritage Square. For several years, when the CNE was in operation, its entrance fee included Ontario Place.

When attending the late-summer fair, I enjoyed walking along the paths of Ontario Place, beside the cooling water of the lake. It was a welcome relief from the hustle and bustle of the CNE and the noisy midway.

Despite the many features that were introduced over the years, and I have not listed them all, attendance slowly dwindled. One of the factors was that the city increasingly offered more choices for places to visit, especially during the summer months.

In 2011, the government announced that there were plans to redevelop Ontario Place, and it was closed on October 25th of that year.

However, in 2015, the West Channel of Ontario Place was employed as the CIBC Pan Am Park, which featured events involving various endurance courses and water sports.

In 2017, Trillium Park opened at Ontario Place bringing new life to the area that continues to this day to host film screenings and allow people to gather around fire pits and admire the amazing view.

Last month, new plans were announced for the revitalization of Ontario Place. They include new waterslides, an all-season adventure park, indoor-outdoor performance venue and a wellbeing resort to name just a few of the proposed attractions.

Only time will tell whether the newest plans become reality and Ontario Place is reborn again.

Doug Taylor was a teacher, historian, author and artist who wrote extensively about Toronto history on tayloronhistory.com. This article first appeared on his site on August 14, 2016 and has been republished here with the permission of his estate. The article has been modified slightly.