The sandy beach co-exists with over 250 homes on the island, which is named after one of the earlier residents, a fisherman and his family who settled on Toronto Island in 1830. 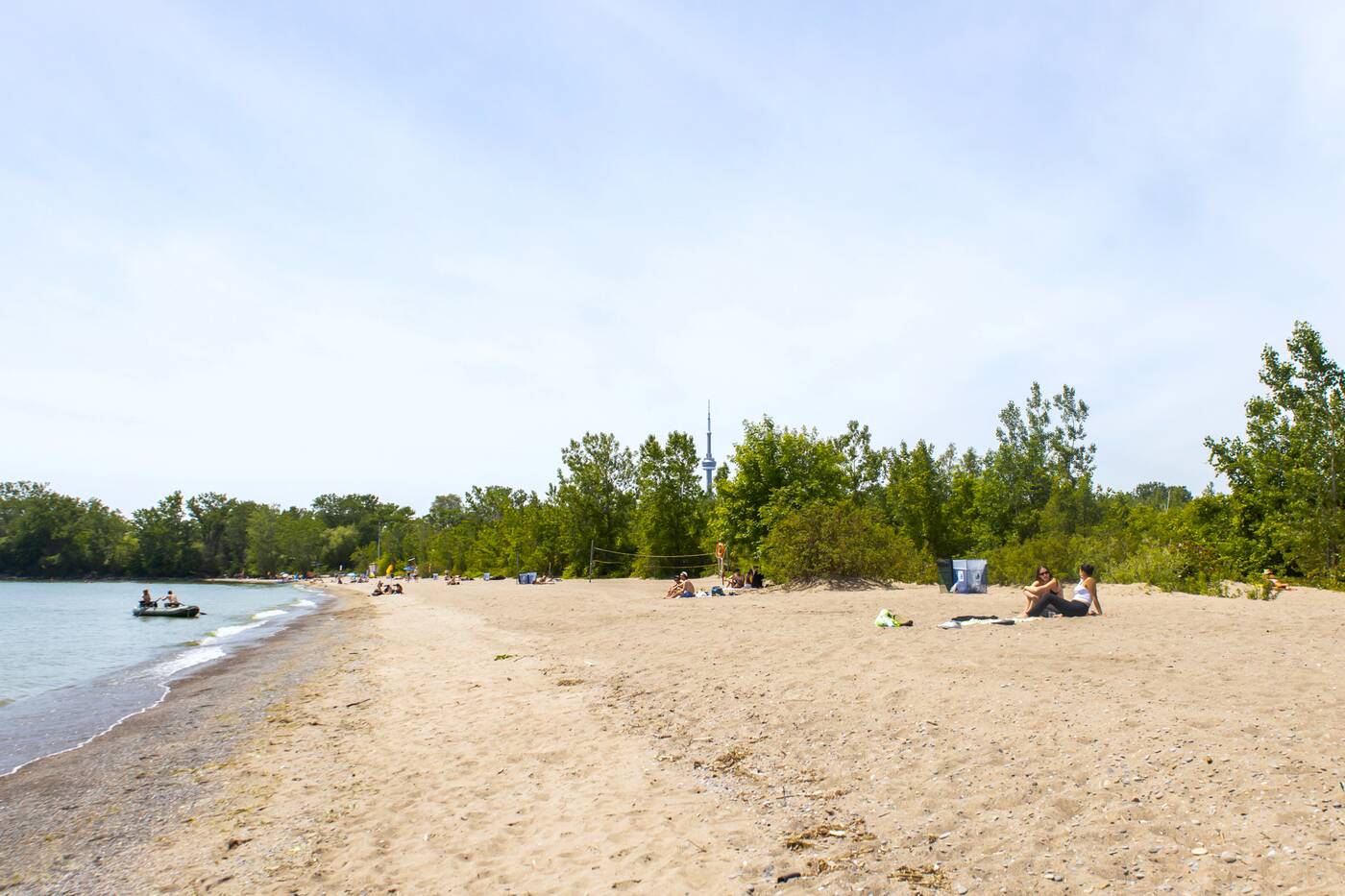 Ward's Island Beach shares the island with over 250 homes.

Although the eastern shores are far from deserted, even the busiest days don't come close to the crowds found at Centre or even Hanlan's.

Residents and visitors looking to escape the throngs of summer while still experiencing the island are usually the ones spending the day along this section of Lake Ontario. 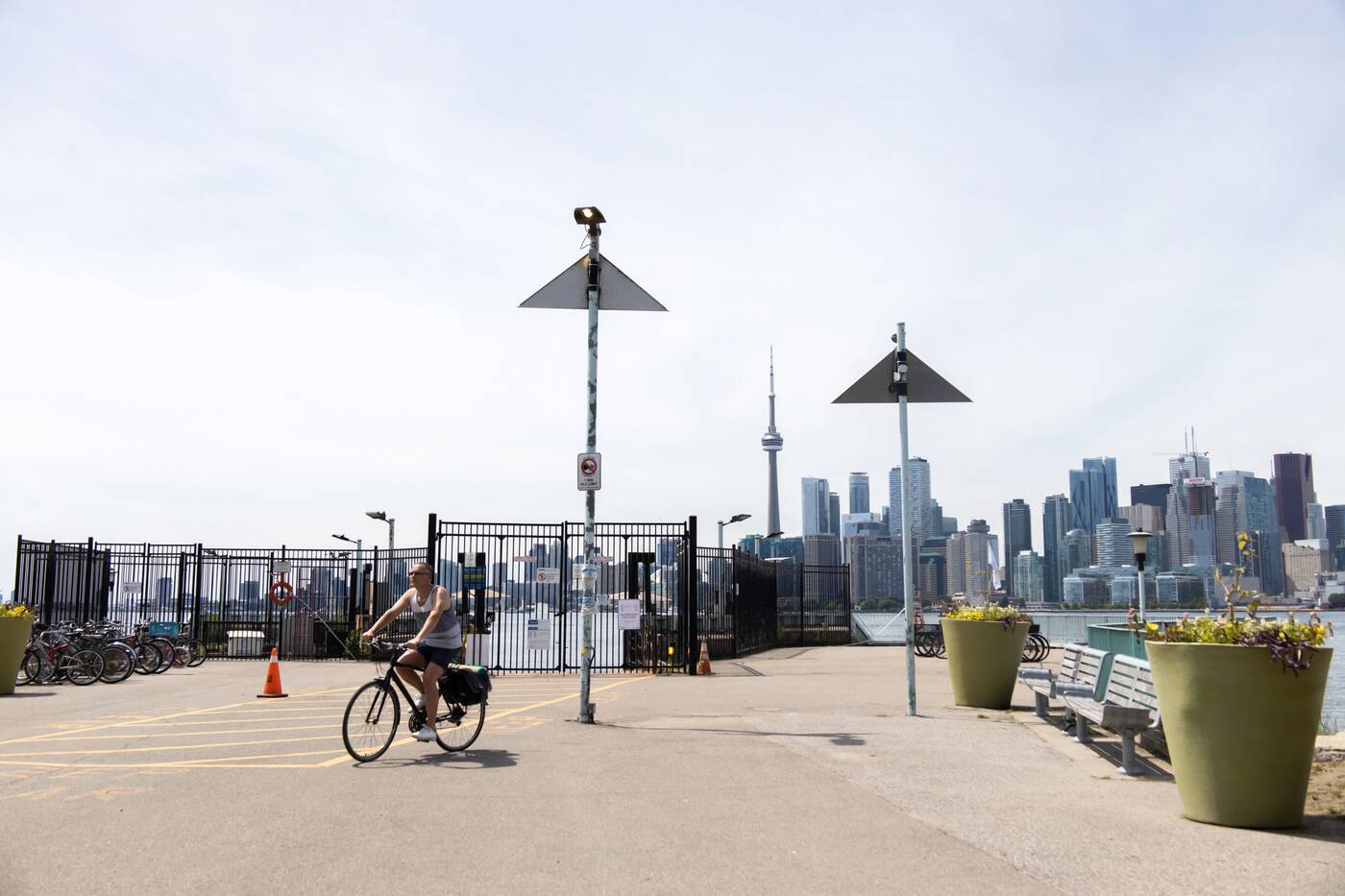 There is a ferry service to Ward's Island and is the shortest ride from the mainland.

The island is serviced by the ferry coming as the shortest ferry ride from the mainland. It's also usually the least busy, though that's not to say it might still be packed on summer weekends. 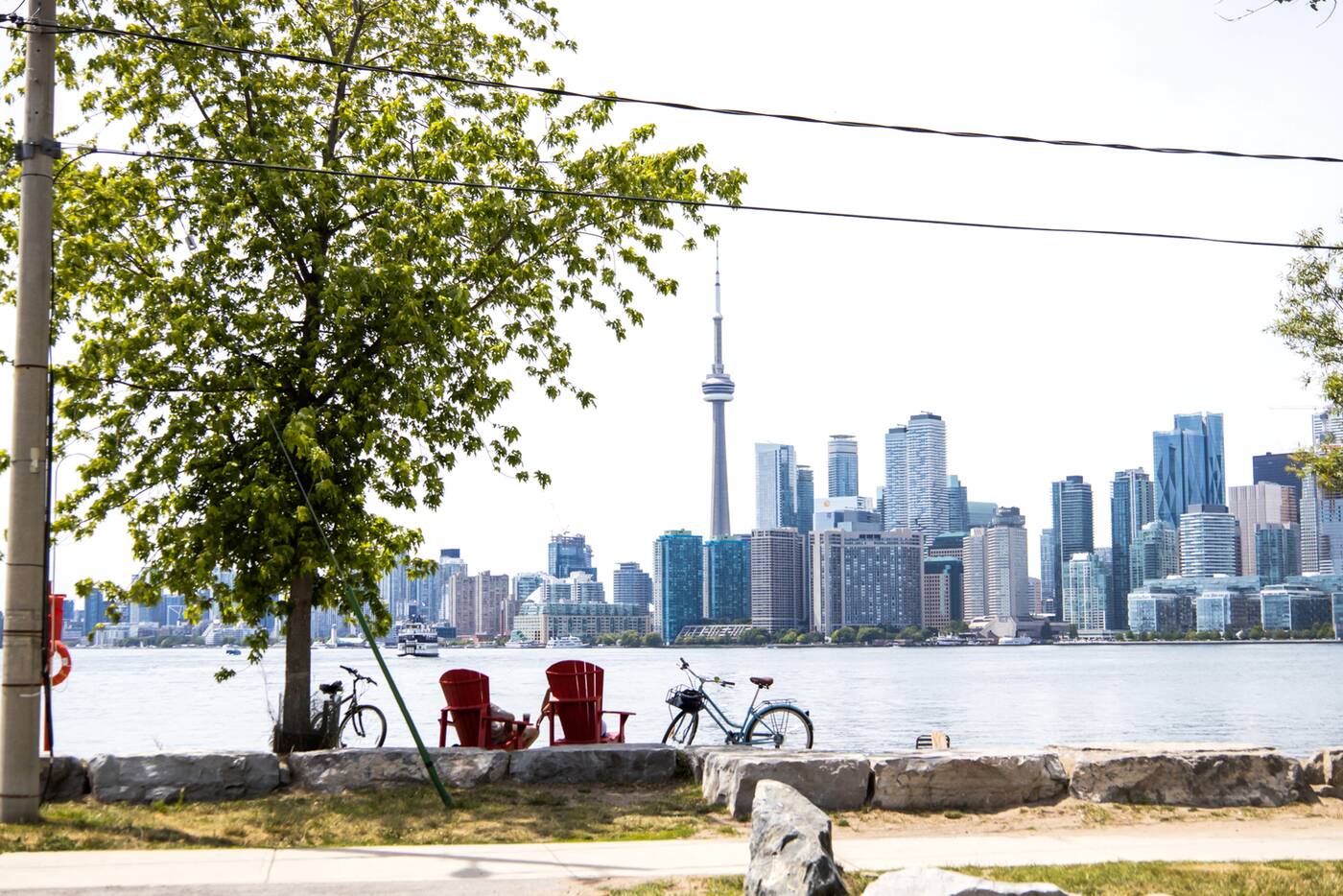 Chairs line the shore next to the ferry terminal where you can take in views of the skyline.

Next to the ferry terminal are plenty of chairs lining the shoreline that provides the perfect spot to sit and appreciate our city skyline. 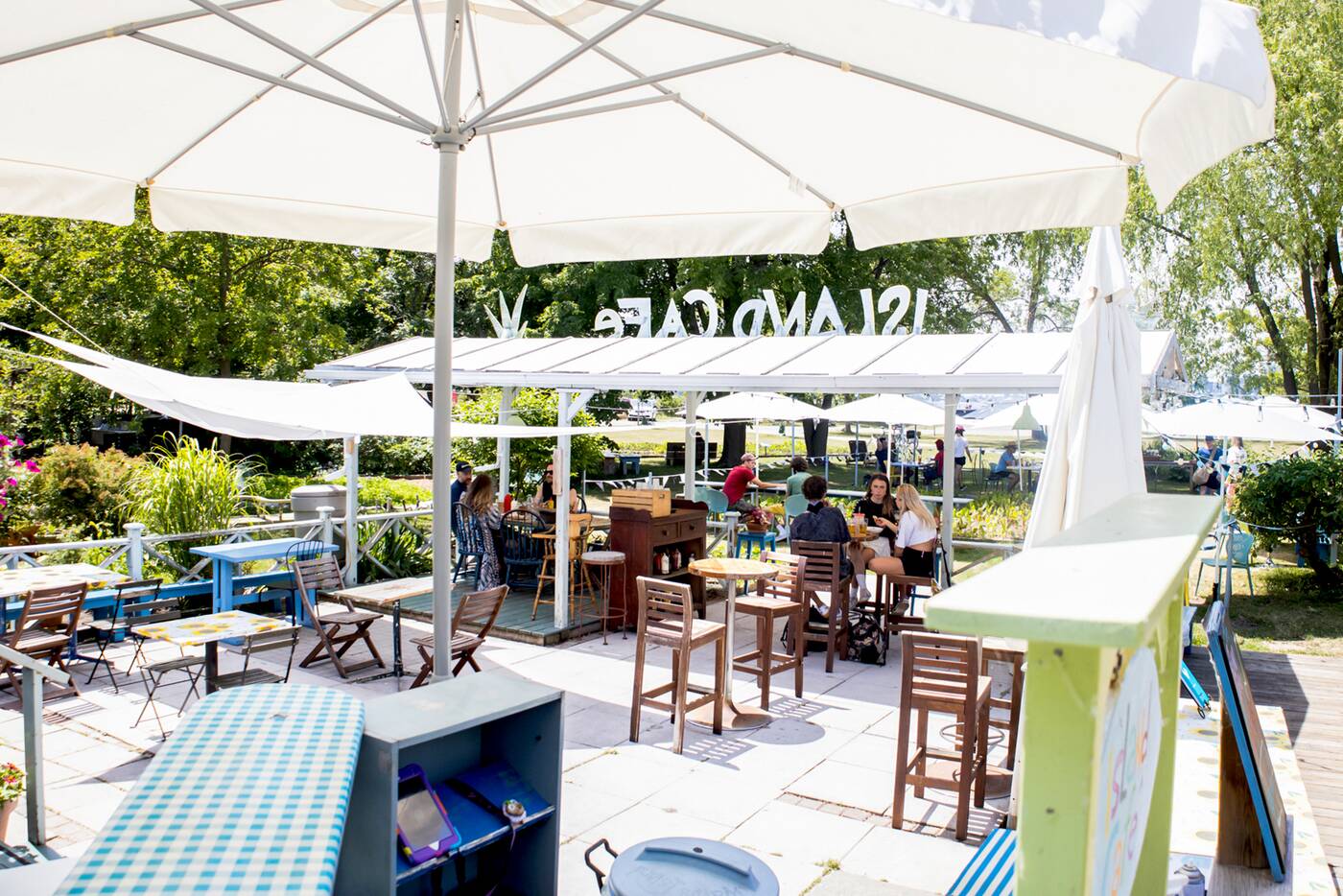 The Island Cafe on Ward's offers a patio where you can eat and drink to your heart's content.

The family-run Island Cafe just across the way comes abundant with local charm. Start or end your day on the licensed patio that has a cottage country feel. Or pick up a cold drink and snack to-go if you're eager to hit the beach. 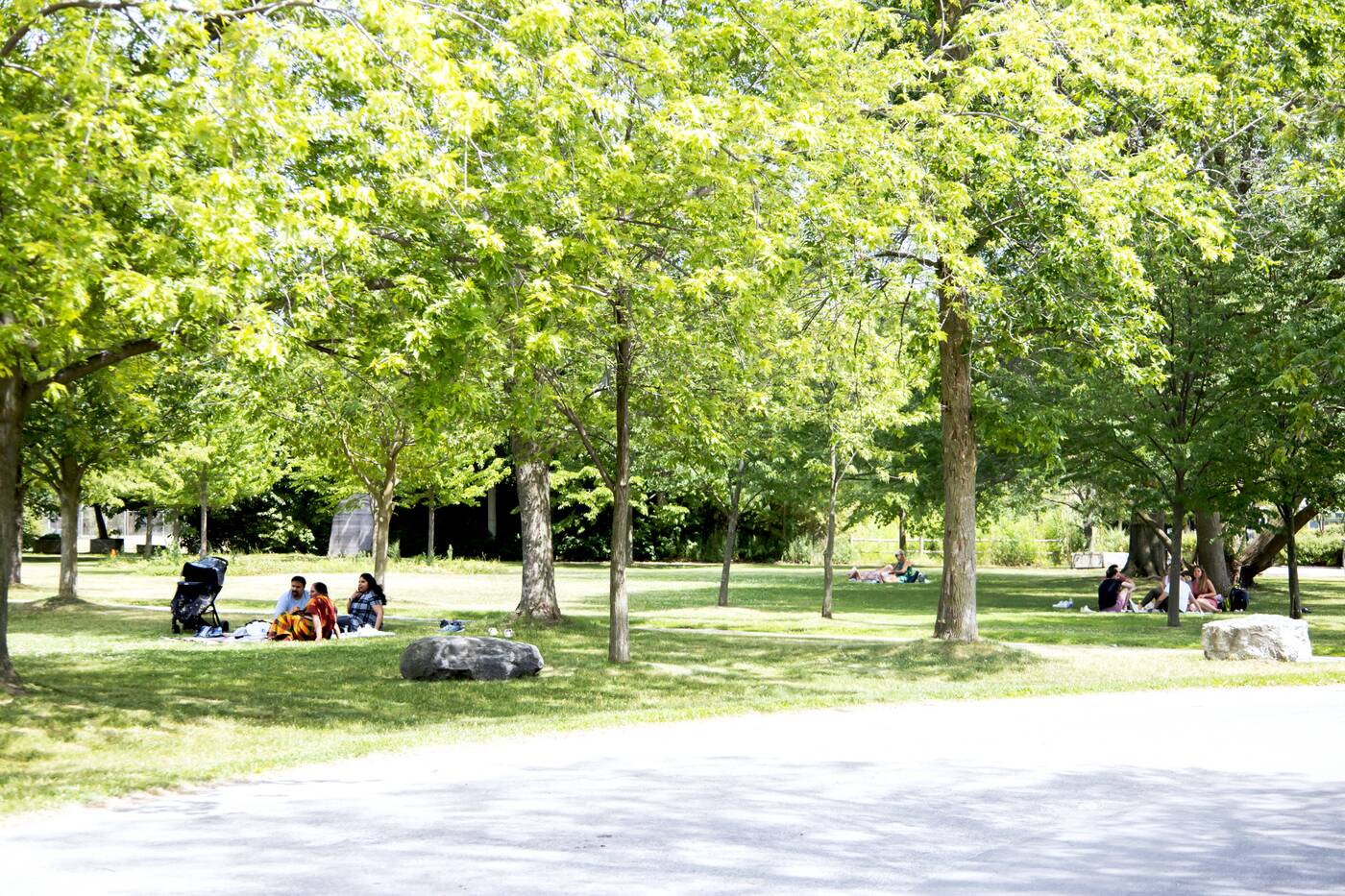 Although there aren't any picnic areas on the island, there are plenty of grass areas to relax.

Head past the cafe and keep walking to the other side of the island for about five minutes to reach Ward's Beach. You'll pass soccer fields, picnickers on the grass, and the Ward's Island Association Clubhouse. 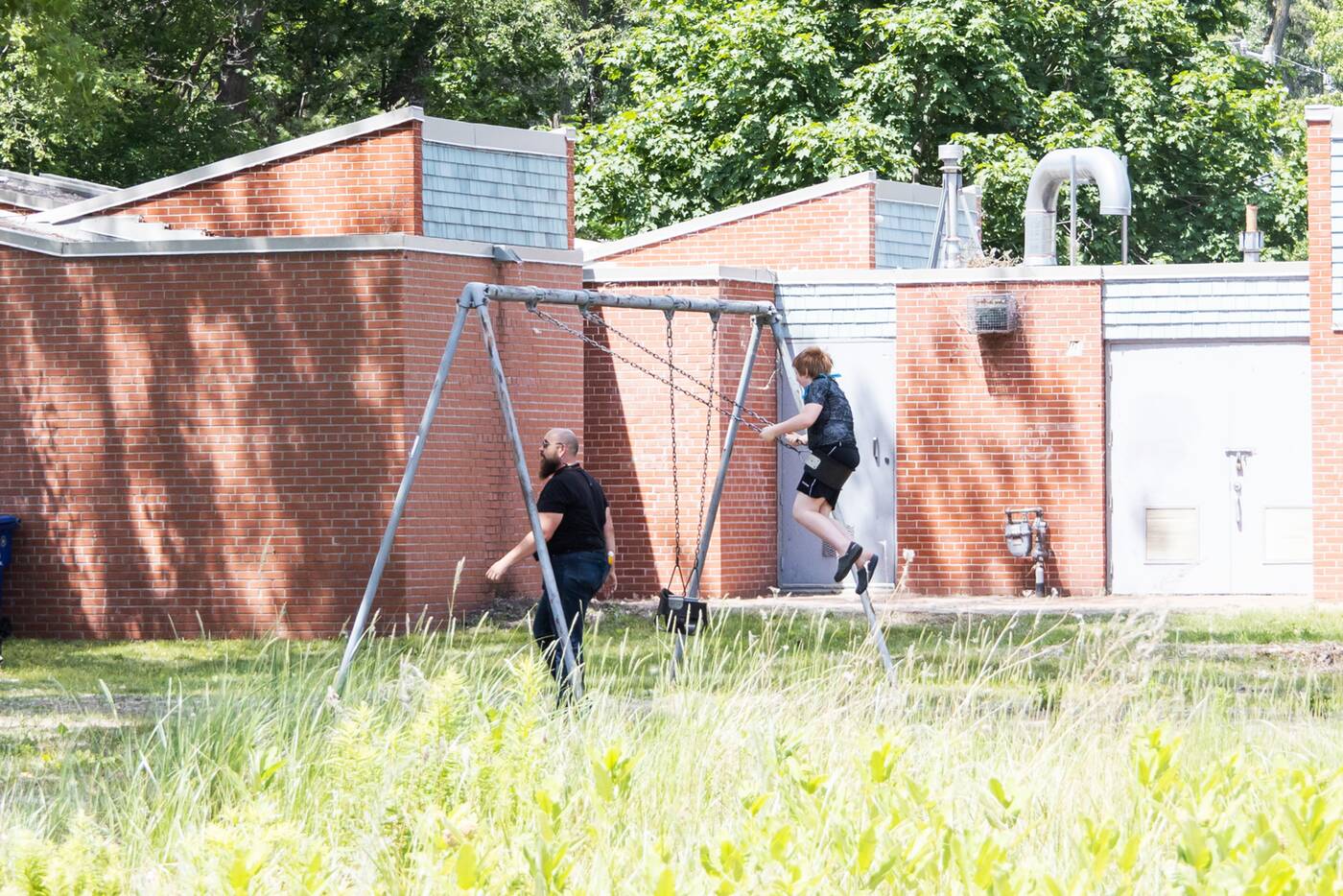 Swings and washrooms are located near the entrance of the beach.

Know that you reached the entrance of the beach when you hit the washrooms and a set of swings. The amenities are nothing close to that of Centre Island, but you trade the slew of picnic areas, bike rentals, amusement rides, and the waterpark in for peace and quiet. 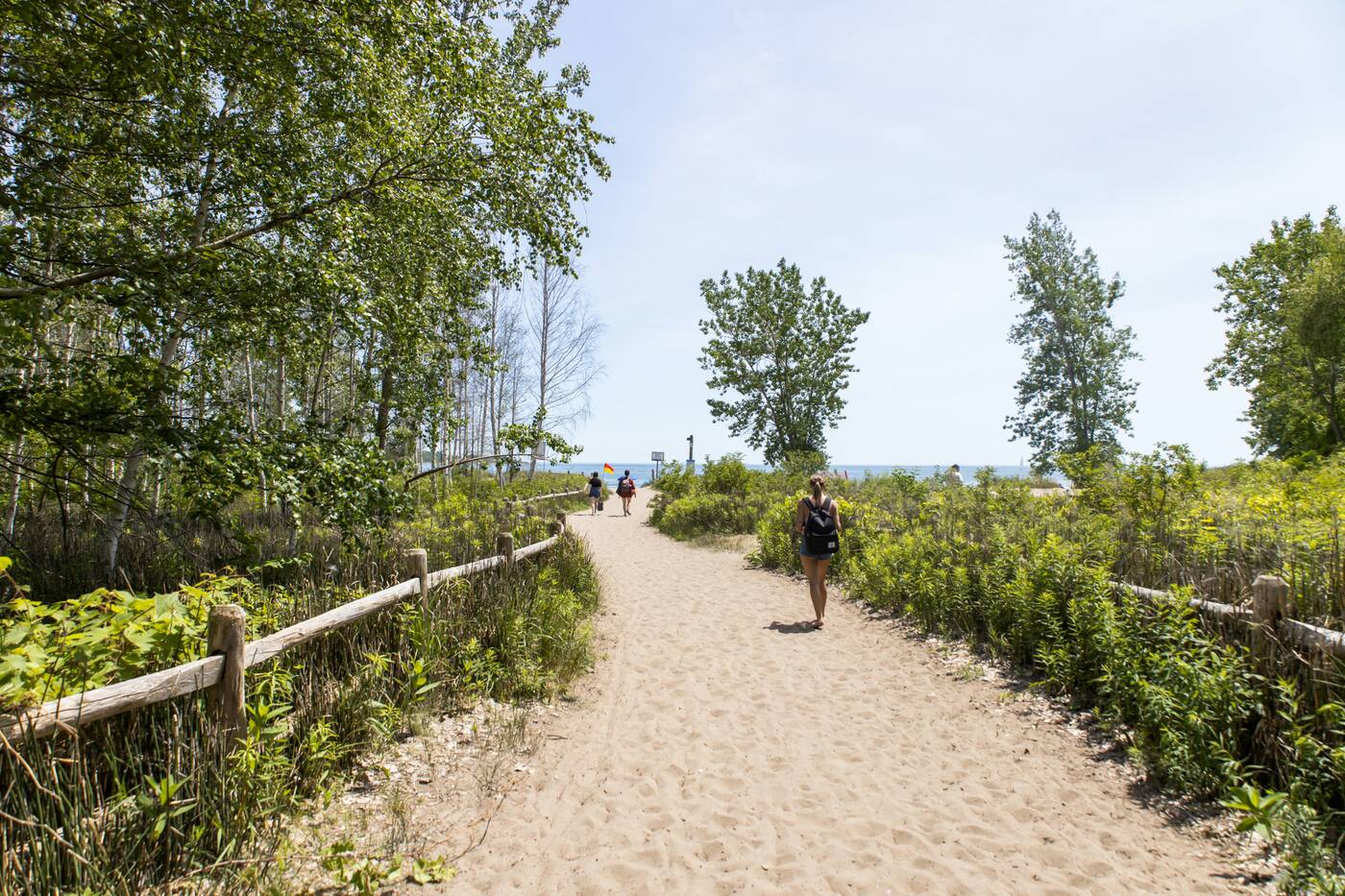 Different pathways lead to the beach.

Different sandy pathways lead down to the beach and the blue water is visible at this point encouraging you forward. While other paths meander through meadows filled with wildflowers and tall grass. 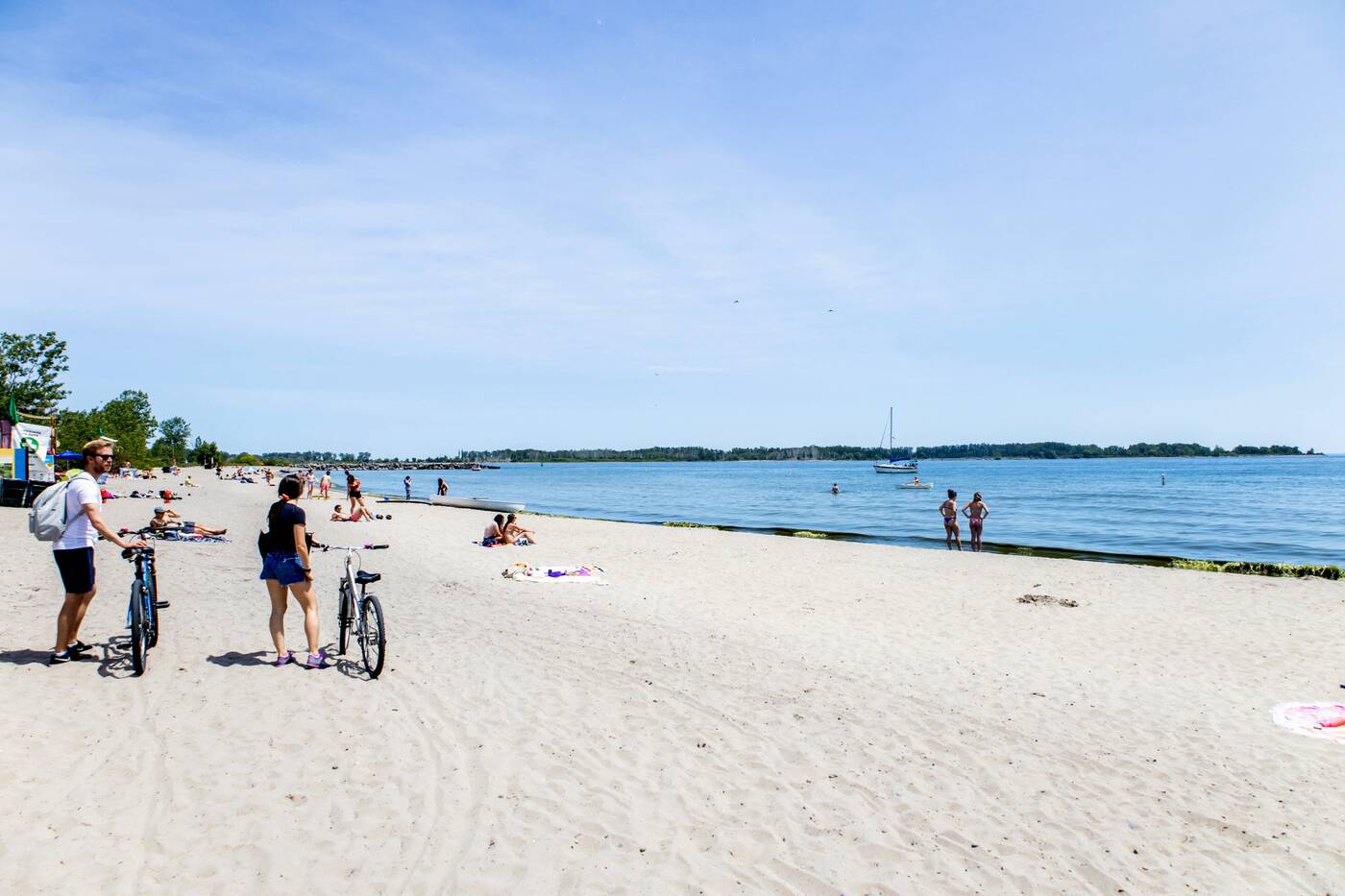 The beach comes with a mix of sand and rocks, as well as beach glass brought in by the current.

The stretch of sand is much smaller than that of the beach at Centre Island but comes with the same mix of sand and rock. Keep an eye on the ground as you walk down the beach as the current also delivers beautiful pieces of beach glass to the shore. 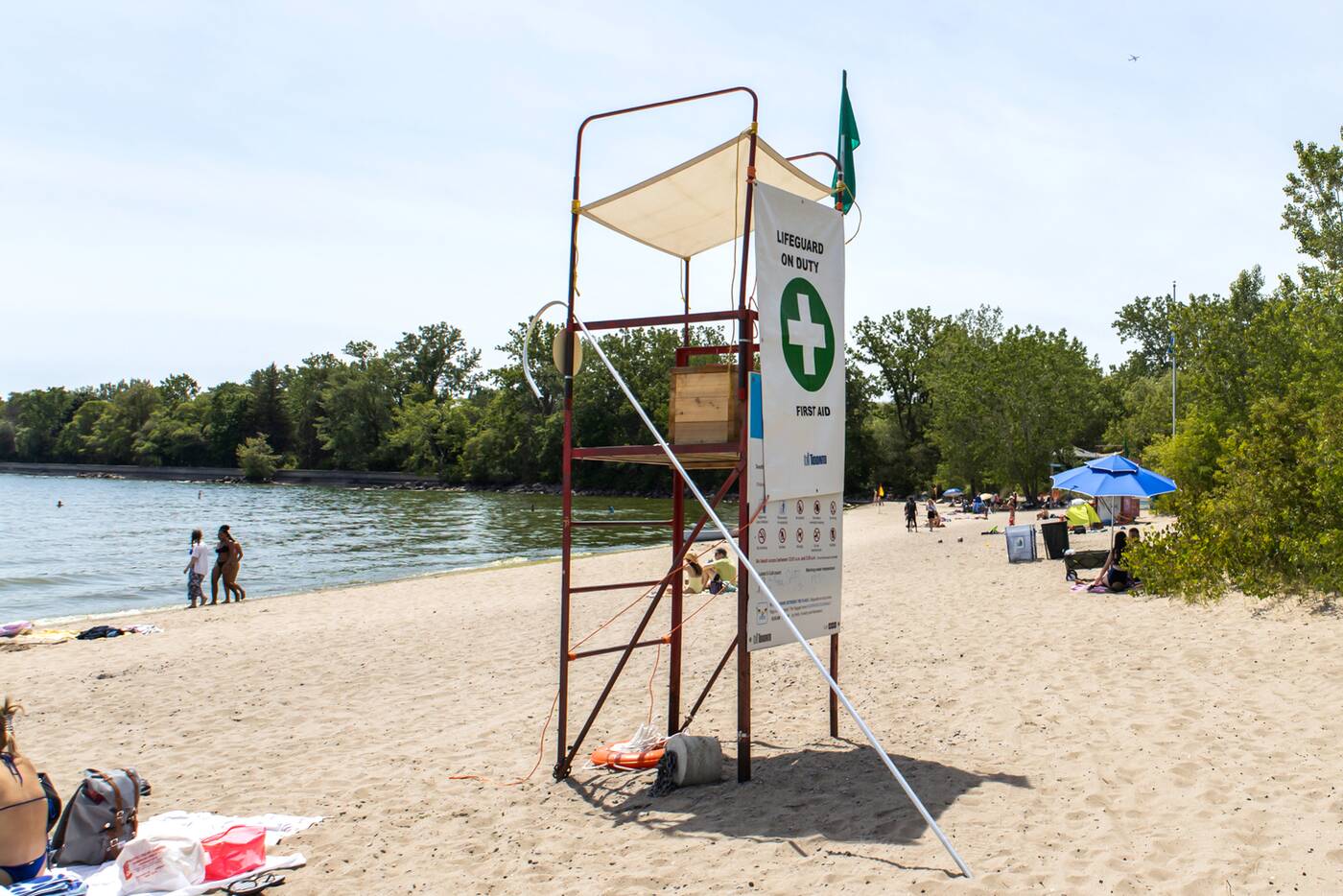 Even though the water has a greenish tinge currently, the blue flag beach is perfectly safe for a swim. And with the Leslie Street Spit jutting out in front of the beach off to the south protecting it from large currents, the waters are especially calm. 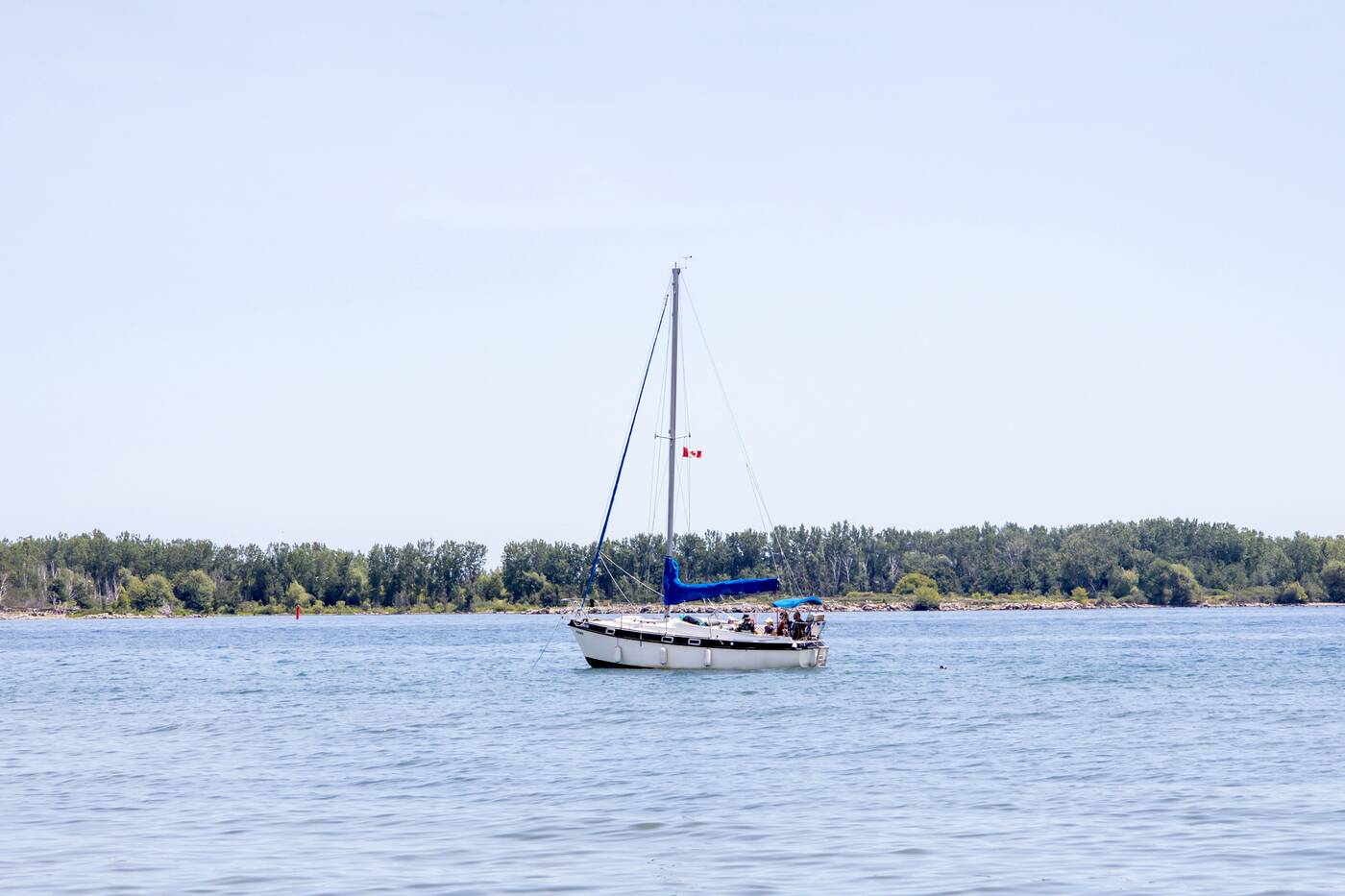 Toronto's Outer Harbour is just a few hundred metres away so plenty of boaters anchor offshore of the beach.

The Spit, Cherry Beach and the entrance to Toronto's Outer Harbour are all just a few hundred metres off in the distance, so just offshore is usually filled with anchored boats hanging out on their way in and out of the harbour. 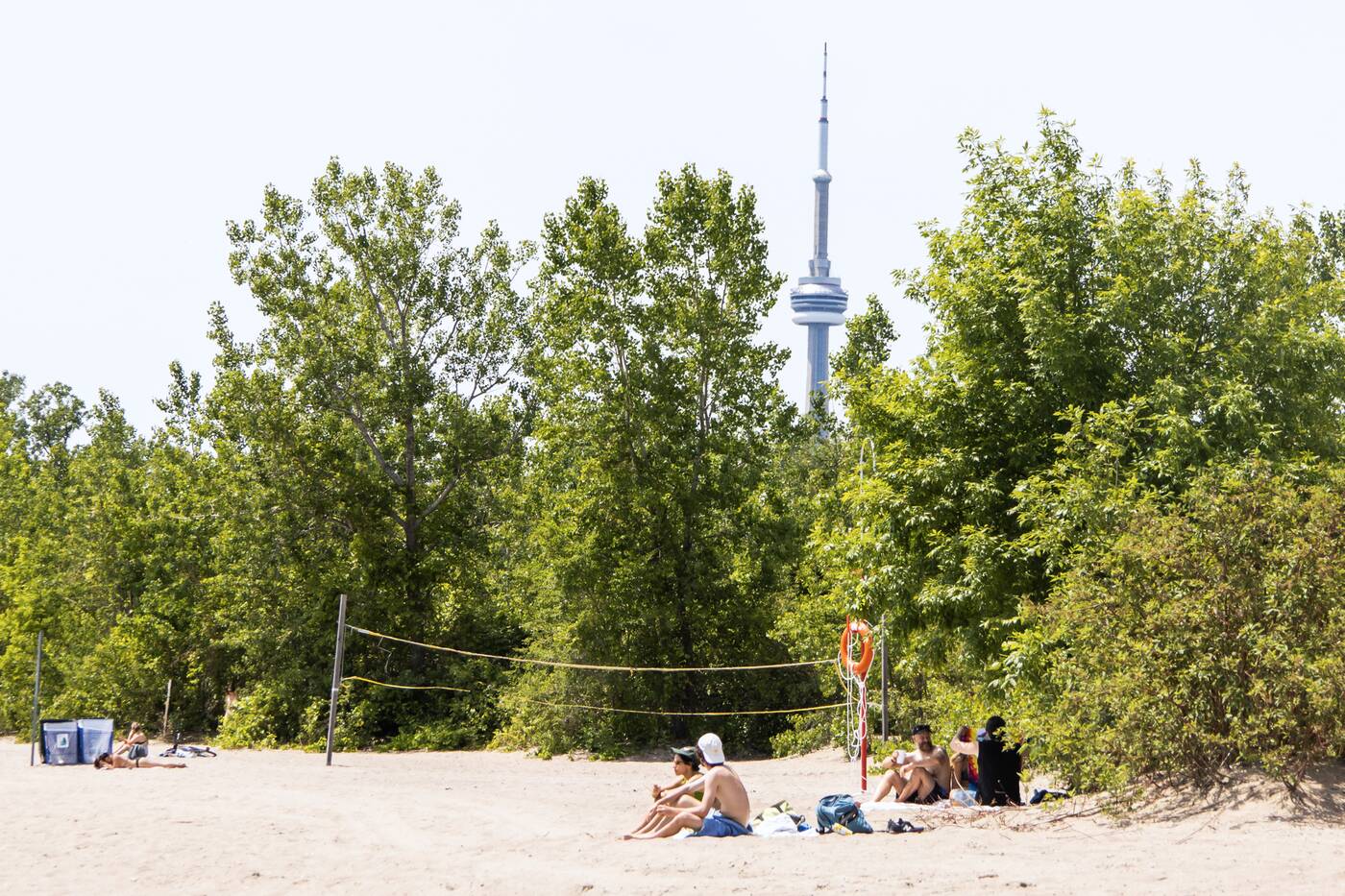 The CN Tower can be seen peeking through the treeline.

A perfectly framed view of the CN Tower through the trees lining the back edge of the beach is a further reminder of civilization. But no need to return to that until you've had your fill of vitamin D.