Naked butts, swinging genitals, and sand: if those are on your list of favourite things, Hanlan's Point Beach is your paradise.

As Toronto's only official nude beach, Hanlan's is not a place for the faint of heart or the easily-offended. But for those trying to liven up their beach-going experience, look no further than this one-kilometre stretch on a secluded stretch of the Islands.

Secluded by a brush and dunes from the eyes of passers-by, no one stumbles onto the clothing-optional area by accident.

Those arriving from the Hanlan's Point ferry terminal will find a fork in the road that will either lead them further south along the trail, where shallow strips of sand for clothed tanning await, or directly west toward the shore, where the nude folk lie. 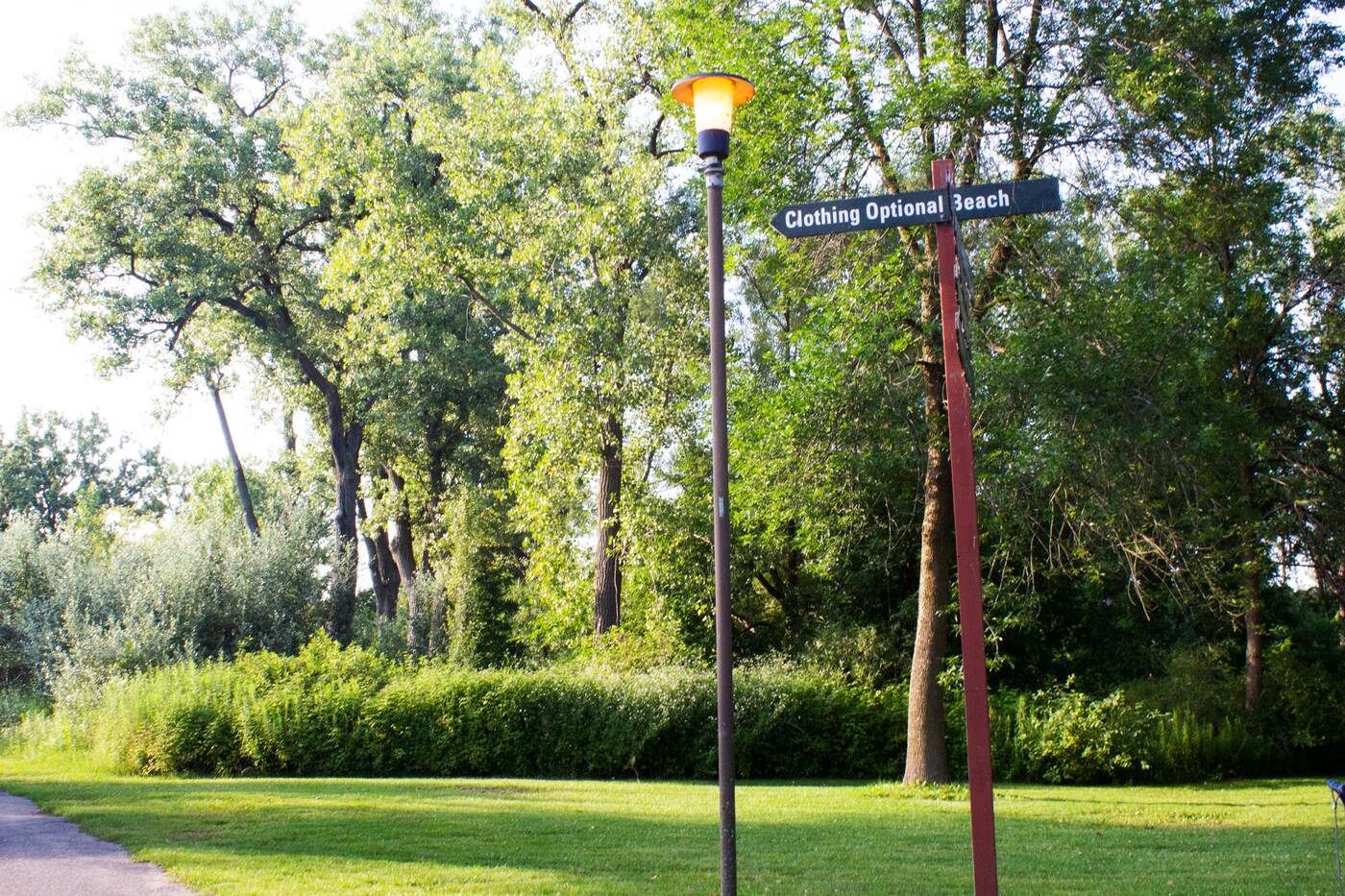 Hanlan's Point Beach is the only official clothing optional beach in the city.

If there's been flooding that year, you'll be forced to take a trek through the plantlife to get to your destination, though doing so is pretty detrimental to the beach's landscape. Just a warning: you might accidentally encounter a hidden masturbator on your way there, like I did.

When you arrive, the beach opens up into a visual frenzy that includes lounging bodies, nude water waders, maybe a gay BBQ, bonfires, and an incredible western vista of the skyline, and Mimico in the distance. 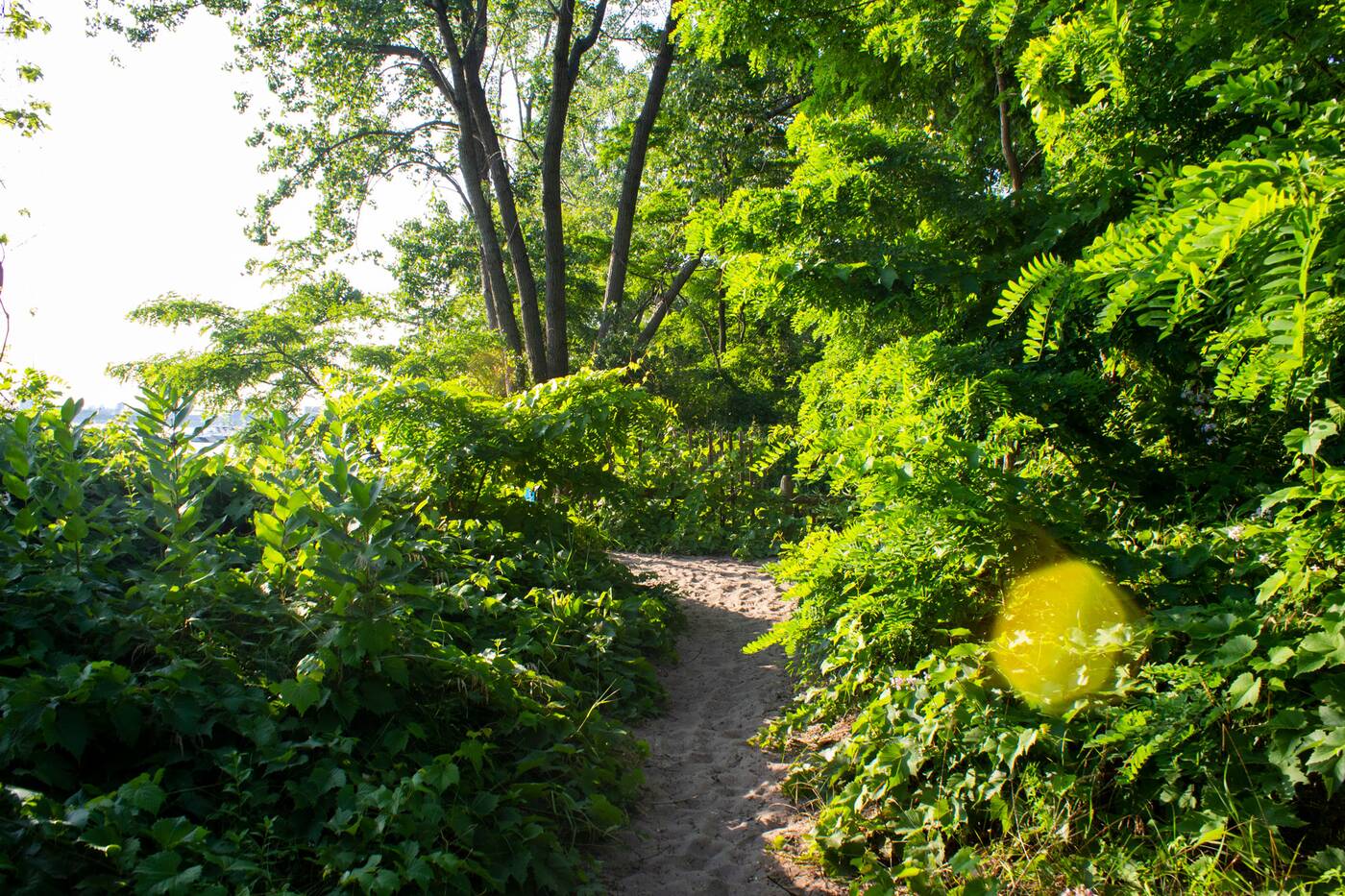 Small footpaths through the sand will take you to the beach.

The water will probably also be teeming with private yachts, blasting Top 40, or maybe some Latin hits, if you're lucky. For some reason, these western waters seem to attract the boat-owning denizen with poor taste in music.

As foreign as it may seem to us in the 21st century, swimming nude was once the norm, from the Mississauga people who first inhabited the Islands to the British colonizers who arrived later.

From 1894 to 1930, clothing-optional beaches were the norm. Near the foot of Dufferin Street and Woodbine Avenue, you could swim nude from 5 p.m to 9 a.m. At Hanlan's Point Beach, anyone could be naked, any time. 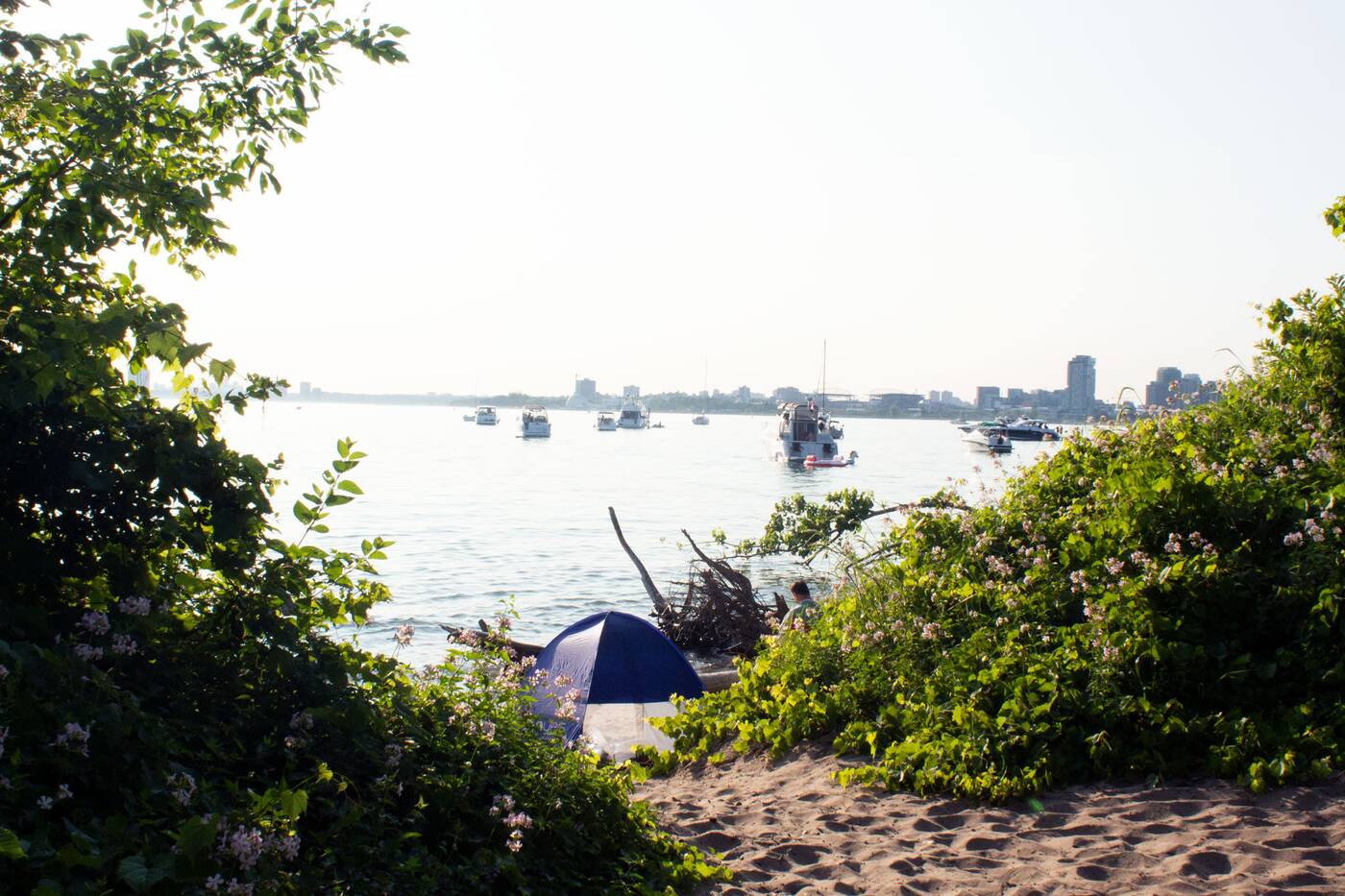 But around the time of the Great Depression, bathing suit rules changed all over the world. Toronto's city council relaxed its indecent exposure laws (meaning bathers didn't have to wear suits that covered them from neck-to-knees) but banned nude beaches completely.

Overtime, Hanlan's became a queer hub (it's still very much a gay beach today.) Thanks to that community and pressure from the public, the city was eventually convinced to pass a by-law authorizing a "clothing optional" section on Hanlan's Beach in 1999. Thus, Toronto's nude beach was (re)born.

It was meant to be a one-year pilot project that turned into three years, until the clothing-option aspect was made permanent in 2002, to the chagrin of Conservative councillors like Giorgio Mammoliti. 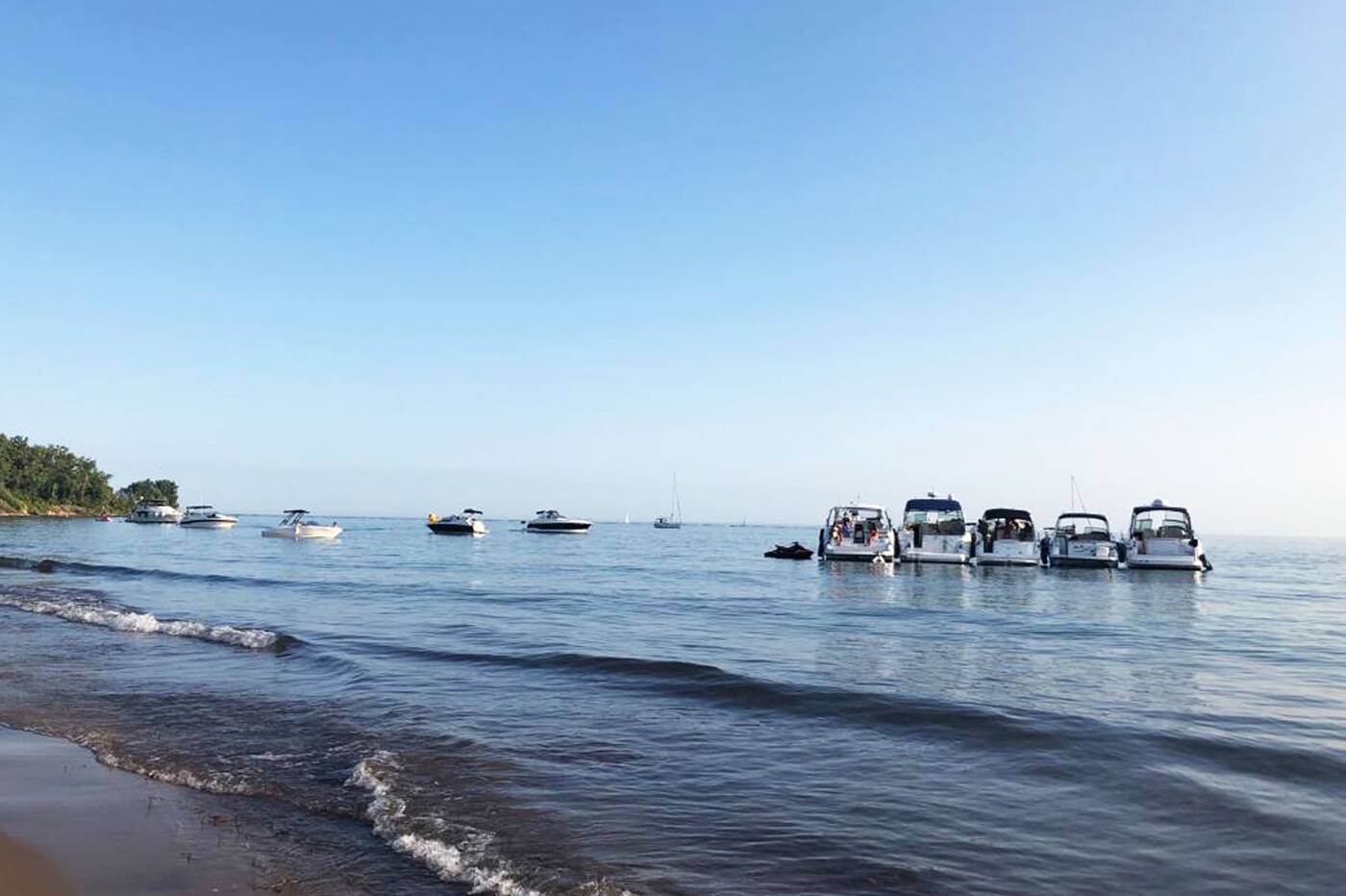 The water at Hanlan's Point is often filled with people throwing boat parties.

It wasn't an easy era for nude bathers: police often clashed with beach-goers, and at one point even begged parks officials to remove the bushes and trees that separate dunes from land, exposing the beach to discourage nudism.

The parks people refused, noting that the plant life keeps the islands from being washed into Lake Ontario. After a few rocky years, police moved on and Hanlan's was fully accepted as a clothing-optional destination—one of two official ones in the country (the second is Wreck Beach in Vancouver).

Today, you'll find the beach constantly bustling with sunbathers of all ages, getting some vitamin D down under, and maybe some discrete public drinking. Just beware of creepy men trying (and mostly failing) to be inconspicuous with their phone cameras. 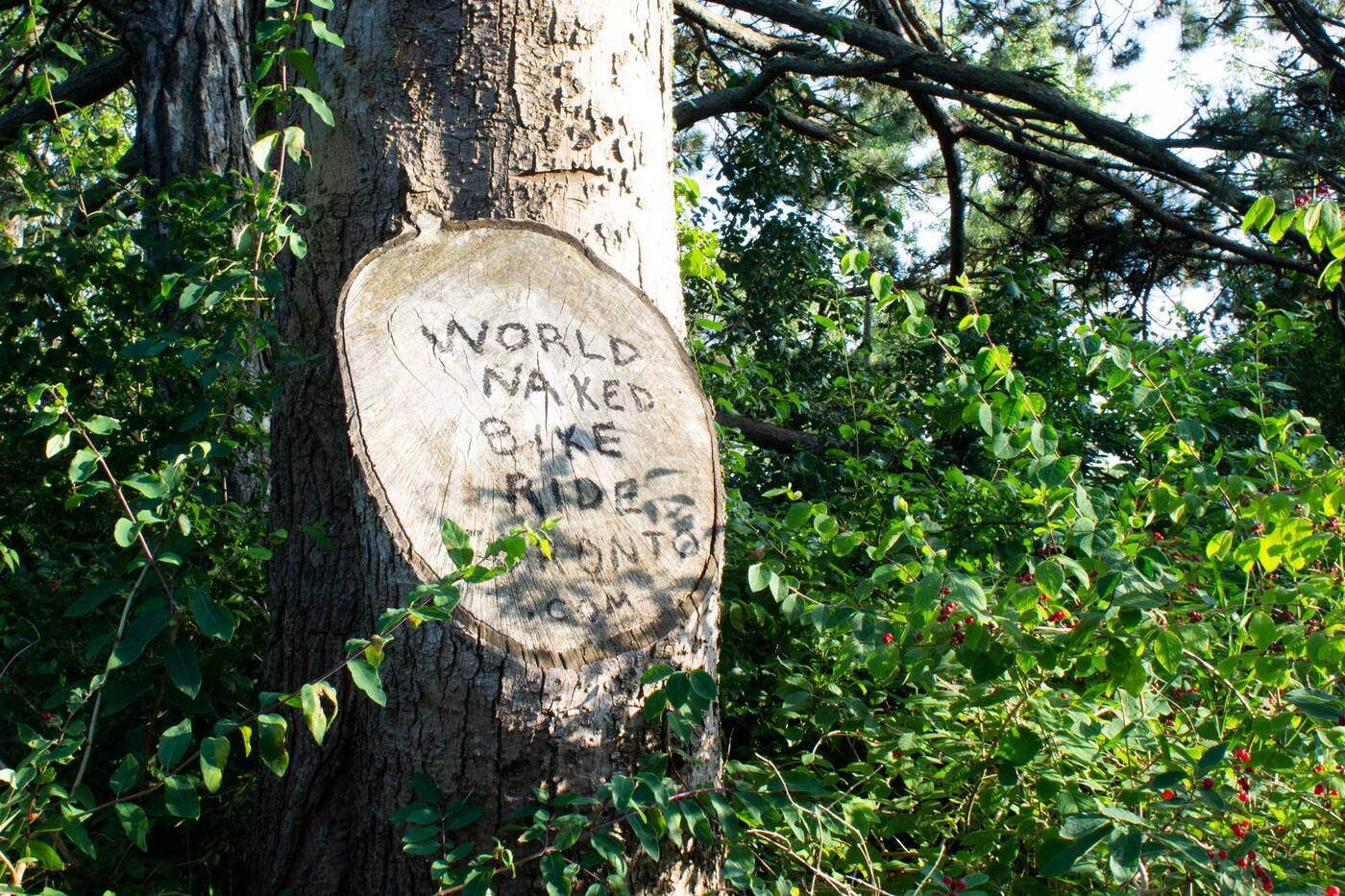 It's best to leave your phone in your bag, for the comfort of those on the beach. And if you're really itching to take a photo, for God's sake, just ask—there are probably plenty of body positive people who’d be more than happy to get a free nude photoshoot.