Guess what, everyone drinking at Trinity Bellwoods Park? You're not the only person squatting in the bushes to do your business because the bathroom is "too farrrrrr."

Those are some nasty, filthy bushes, and you might now be carrying E. coli. Congratulations.

Furthermore, the people whose properties surround the park are really, really mad about you peeing and pooping on their houses — justifiably so, most would agree — and they're coming for you (by way of pressuring local politicians to crack down on such behaviour).

"We want Trinity Bellwoods Park to be a wonderful park. Unfortunately right now the park is in crisis. Yes a crisis. Not just a park that has some 'issues,'" writes the newly formed Gore Vale Action Committee, members of which live directly adjacent to the popular west end Toronto park.

"The thousands of people who are causing massive problems for us are having a great time partying in the park! They flock to the park because the city has allowed it to become an Anything Goes Zone. Drink. Party. Make all the noise you want day or night. It's great. Except for the people living in houses less than 100 feet away."

Not much to add folks. Sad. pic.twitter.com/vr4wSCJ1OQ

Noise is a persistent problem not just for residents of Gore Vale Avenue, but for people bordering the park on all sides. Lately, garbage has become more of a problem as well — and both are worse than ever before.

While Bellwoods has long been a hot spot for young adults to come drink booze on blankets and laugh the day away, the crowds have grown rowdier since the onset of the COVID-19 pandemic and the resultant shuttering of bars.

According to the City of Toronto, complaints about park use at Trinity Bellwoods are way up this year compared to last, and it's not a result of the encampments formed by people experiencing homelessness.

Data provided to blogTO by the city shows that 37 complaints had been logged in 2020 about how people were using the park by June 8 of that year.

Between January 1 and June 8 of 2021, the city had recorded 117 complaints related to park use at Bellwoods — more than three times the number logged during the same period last year.

Of all 229 complaints about the popular park logged to date this year, only 59 of them pertained to the controversial encampments that have formed amid the pandemic. In other words, don't blame encampments for ruining the park, guys — it's your shitty music, shitty attitudes and literal human shit. 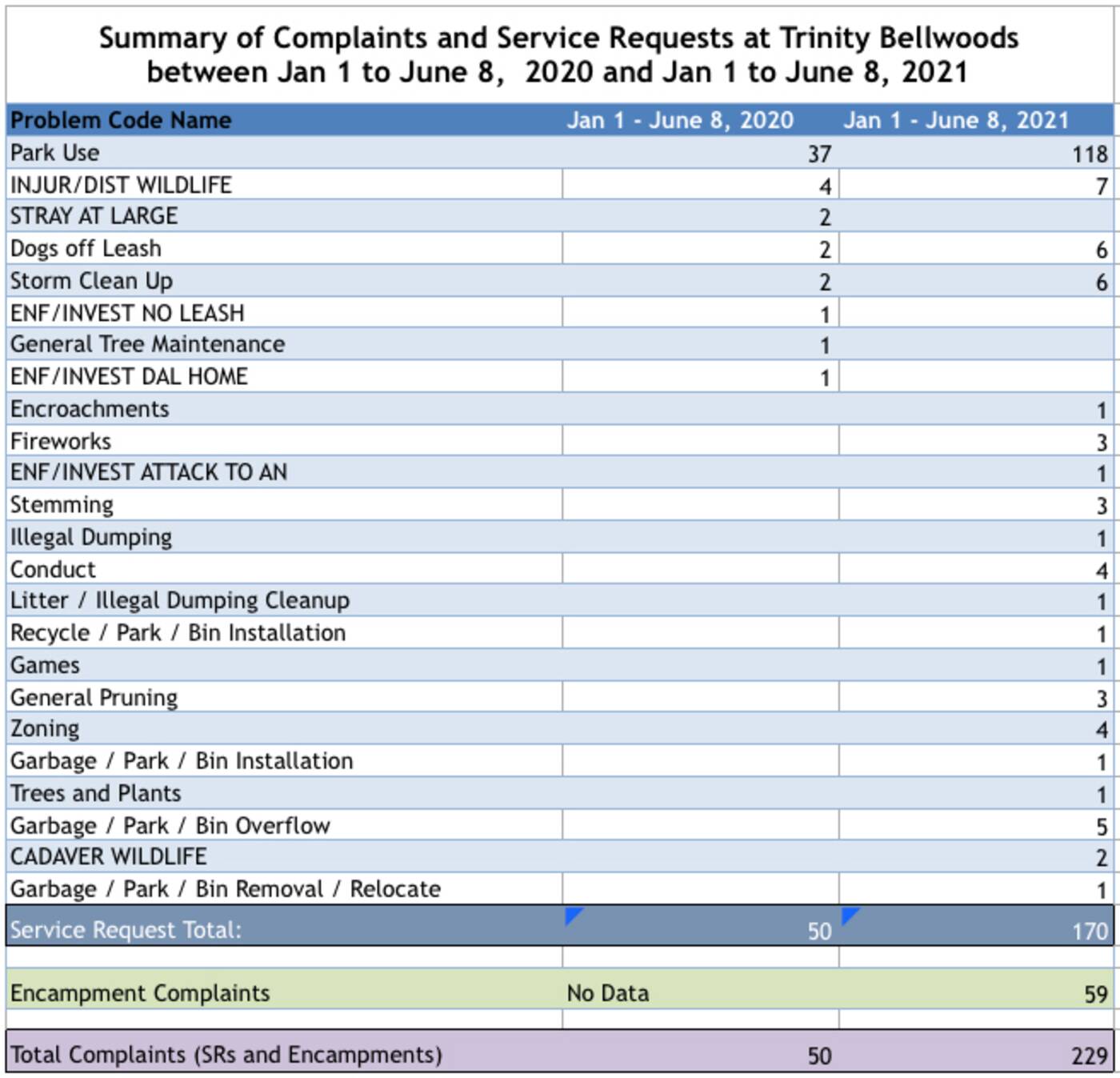 Members of the Gore Vale group have been documenting some of the behaviour that has inspired formal complaints this year, but one of the more egregious issues they warn about on their website is the whole "people peeing on houses and public green space" thing.

"Oh and if you need to take a leak… just find an alleyway between our houses and let fly. What could be wrong with that?" the group writes sarcastically on its website, sharing photos of two young men appearing to do just that.

I mean, it's one thing (a bad thing) to be obnoxiously loud while partying in a public park, but it's another thing entirely to use said park and surrounding private properties as your own personal puppy pad, peeing and pooping all over the place like a toddler at a water park. Gross.

"City bylaw officers and Toronto Police have been attending hot spot parks, focusing on areas that continue to experience high volumes of people and issues that pose the greatest risk to health and safety, including Trinity Bellwoods Park," said a representative for the City of Toronto when asked about the problem.

"Urinating on neighbouring properties is considered trespassing and indecent exposure, which is enforced by Toronto Police. We encourage everyone to respect the rules and make more considerate choices by utilizing the washroom facilities located at Trinity Bellwoods."

The truly messed up thing is that there are multiple washroom facilities located within the roughly 38-acre park. The city even installed a row of portable toilets this year to help mitigate the crowds.

And yet, for whatever reason (people have theories), the production of peepee-poopoo soup persists at Trinity Bellwoods.

"My mom lives on Trinity Bellwoods Park and they are having real issues with people urinating and defecating on their houses. We all want to enjoy the park, but it is hugely disrespectful and gross to use houses as washrooms," wrote one person on Reddit Sunday.

"I know that there aren't many washroom facilities in the park, but there are some in the dog bowl and near the playground. There are also portapotties that have been added in various locations."

Miriam Hesse-Fernandes, who lives on Gore Vale, told blogTO that the behaviour at Bellwoods has gotten significantly worse lately, and that parkgoers are now being disrespectful (if not downright agressive) to residents who complain.

"If I would have been asked about the park situation last summer, I would've said 'well, the urinating at our house during night and day time by park visitors is really getting to me, but humans are social animals and obviously many feel the need to spend time with their friends," she said.

"But things have changed this summer… Now Trinity Bellwoods Park turns into a free outdoor festival and dance party every weekend... The only difference to an official event being that it is completely renegade. Nothing is organized, no authority is making sure everyone stays safe, and no one considering the impact this has on us, the neighbours."

It’s really telling that a bunch of privileged drunk adults disrespectfully leaving garbage, and apparently other waste, behind in their wake can get washrooms installed in the park in less than a week when the homeless had to wait over a year for them. #priorities @JohnTory

Hesse-Fernandes says she and her husband now take their dogs to a nearby schoolyard for play and excercise, as they don't feel the park is safe for their pets after finding such treasures on the ground as cooked bones, cannabis edibles, bags of drugs, vomit and "actual human excrement."

"I am truly disheartened with the way people selfishly use this park now. No weekend goes by without this disrespectful, inconsiderate behaviour," she says, citing things such as people blasting music, getting drunk and high, leaving garbage behind, screaming until 2 a.m. in the morning and, of course, urinating on her living space.

When asked about what's being done to remedy the problem, Toronto police Constable Alex Li told blogTO that the city takes the lead on park enforcement, but that TPS officers "do patrol the park every day and remind those in attendance of by-laws and will disperse people where possible."

"Officers have to use their discretion at the time and have to take into account the safety of themselves, those in attendance and the wider public," said Li. "We have also been speaking with residents nearby to try and address their concerns."

While the concerns of neighbours are certainly mounting, Hesse-Fernandes has a simple message for people who use the park to party:

"This is not fair, guys. We are asking for some decency and respect and for you to consider more than just yourself. GIVE US A BREAK. Clean up after yourself, respect other peoples' property," she writes.

"I can only speak for myself, but I know that most of my neighbours would agree: We do not want to call authorities on you, we want you to enjoy the park. But it can't continue like this."