That's not a value judgment, it's an unfiltered observation: The place is literally covered right now with food wrappers, six-pack holders and pee (most of it dog, some of it undeniably human).

But I mean, was anyone expecting anything different?

Bellwoods has, for at least a decade, been one of Toronto's most-popular spots for young adults to spend the day drinking outdoors by the hundreds or even thousands, especially on sunny days.

The COVID-19 pandemic kicked things into overdrive last spring when businesses shuttered and indoor gatherings of all kinds became illegal, forcing stressed-out residents to find somewhere else to blow off steam.

What was once a weekly annoyance for locals became a national news story as maskless, seemingly incontinent crowds descended upon the park, drawing comparisons to Coachella (or Woodstock, depending on the critic's age) and prompting Toronto to tackle the problem with spray-painted white circles.

The city-installed circles, which are meant to encourage proper social distancing, are back this year, but so too are scores of people partying at Trintiy Bellwoods because — wouldn't you know it? — bars and restaurants are still closed nobody can hang out with their friends inside amid the stay-at-home order.

#trinitybellwoods be poppin today. Get out and enjoy your life (safely) pic.twitter.com/wAIIbf5YMM

Whether it was the summerlike temperatures, the newly-announced extension of lockdown restrictions, or even buzz over the return of the white circles, the 85-acre green space was slammed all weekend long, like most other Toronto parks.

The vibe at Bellwoods this weekend was definitely more "let's dress up and take pictures at the park" than the traditional old drum circle / slack-lining / west-end-youths-drinking-tall-cans-on-blankets, but things seemed relatively orderly — albeit busy — during the days.

Evenings and nights got quite rowdy, however, by the accounts of people living nearby, and as evidenced by all of the trash lying around on Saturday, Sunday and Monday mornings.

Thank goodness for the can collectors is all I can say, because could you imagine what the park would have looked like without them?

I'm outraged about all the garbage left behind. pic.twitter.com/Lm6W4adko6

"PSA! Pick up your rubbish! Put in bins, if full pile neatly beside. OR boomerang it back to where you bought it. They'd be more than happy to dispose," wrote the Trinity Bellwoods Park community Instagram account in the caption of a photo showing garbage strewn about the park on Sunday.

"We want all to enjoy a clean, safe park in the afternoon and morning!"

As of Monday morning, the City of Toronto had emptied what on Sunday were grossly overflowing public trash bins, but debris remained littered around the open, treeless area where the majority of circles live.

Black and blue bins around the park are no longer exploding with pizza boxes and plastic cups, but you can definitely tell that they were in a bad way not too long ago. 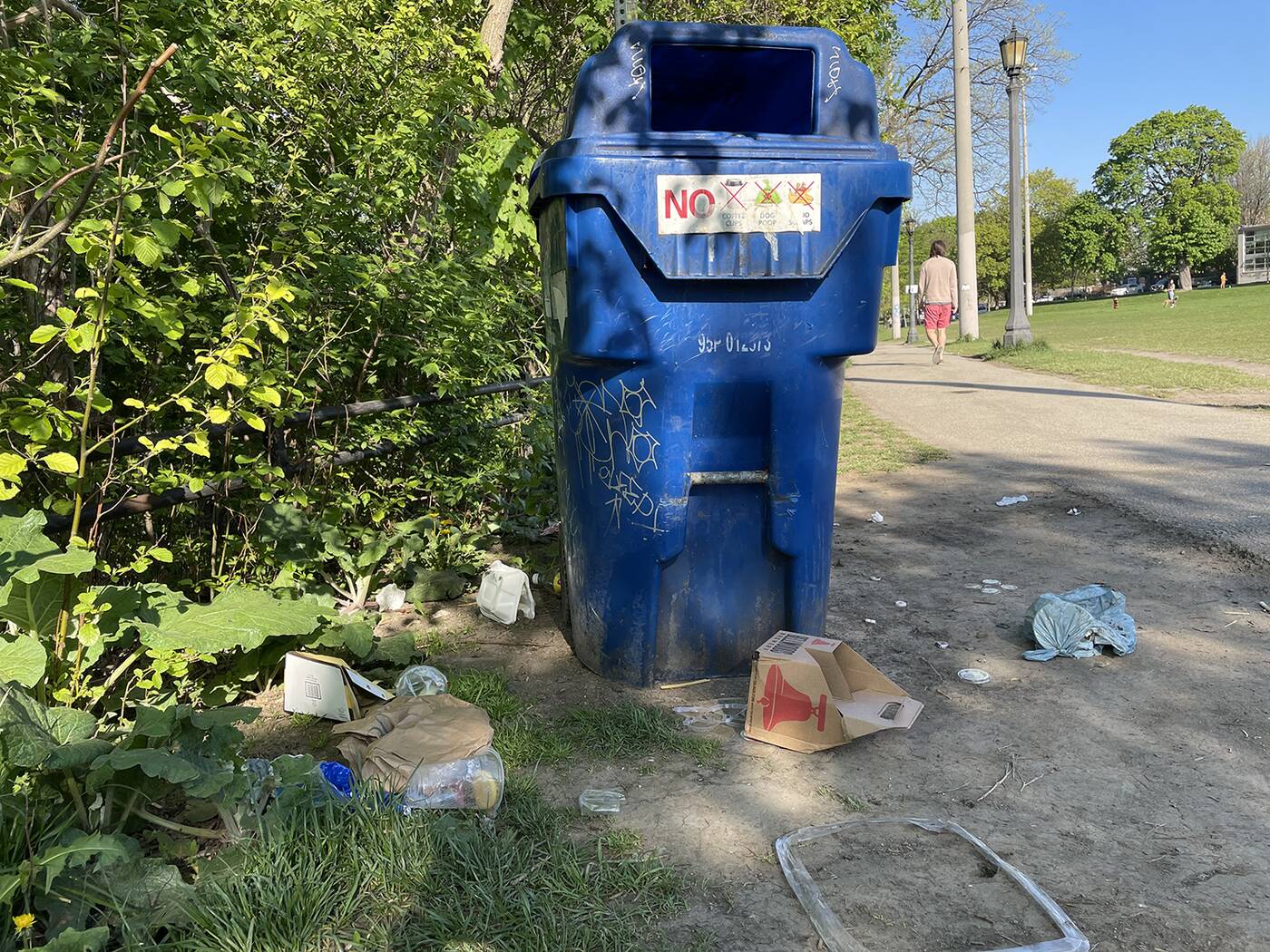 Lots of garbage had yet to be picked up around Trinity Bellwoods Park as of Monday morning following a busy weekend. Photo by Lauren O'Neil.

Some people are blaming the city for not putting garbage disposals throughout the park or for failing to empty the cans enough.

Others say it's not the city's responsibility to clean up after litterbugs.

"It's easy to point a finger at the city and say 'more garbage cans' [but] how about those who brought the trash take the trash with them," wrote one Twitter user. "As an avid hiker, camper, and outdoors man, I've followed the credo that all we should leave behind are footprints."

"Maybe instead of spending hundreds of thousands of dollars paintings circles, put out some trash cans instead?" wrote another with a helpful suggestion for the City of Toronto.

And pick up your trash!!!
This is the view this morning at Trinity Bellwoods! Disgusting humans! 🤬 pic.twitter.com/v2JzLGyM9X

Others still are blaming the provincial government for keeping outdoor amenities closed and prohibiting people from gathering at their own homes.

"Well, if patios will continue to be shut down, then the city should be increasing the number is trash cans and the times they empty those," suggested one Twitter user.

"I guess this falls under 'freedom' too," wrote another. "Freedom to be complete and utter pigs and treat the city, community, and environment we live in like a garbage can. Appalling as there are so many places to throw out trash in that vicinity and all over Toronto."

Will more trash receptacles, the reopening of bars, or even an increased police presence help Bellwoods tackle its trashiness? This is not yet clear.

What we can say for certain is that the old adage rings true: You can round drunk people up into circles, but you can't make them walk to garbage bins.