Metrolinx just keeps on coming with the detail drops as Ontario prepares to start building a new subway line through downtown Toronto.

The former two stations will serve as connection points between the $11 billion Ontario Line and the TTC's existing Line 1 subway, while the latter two will bring subway service to east downtown Toronto for the first time ever. 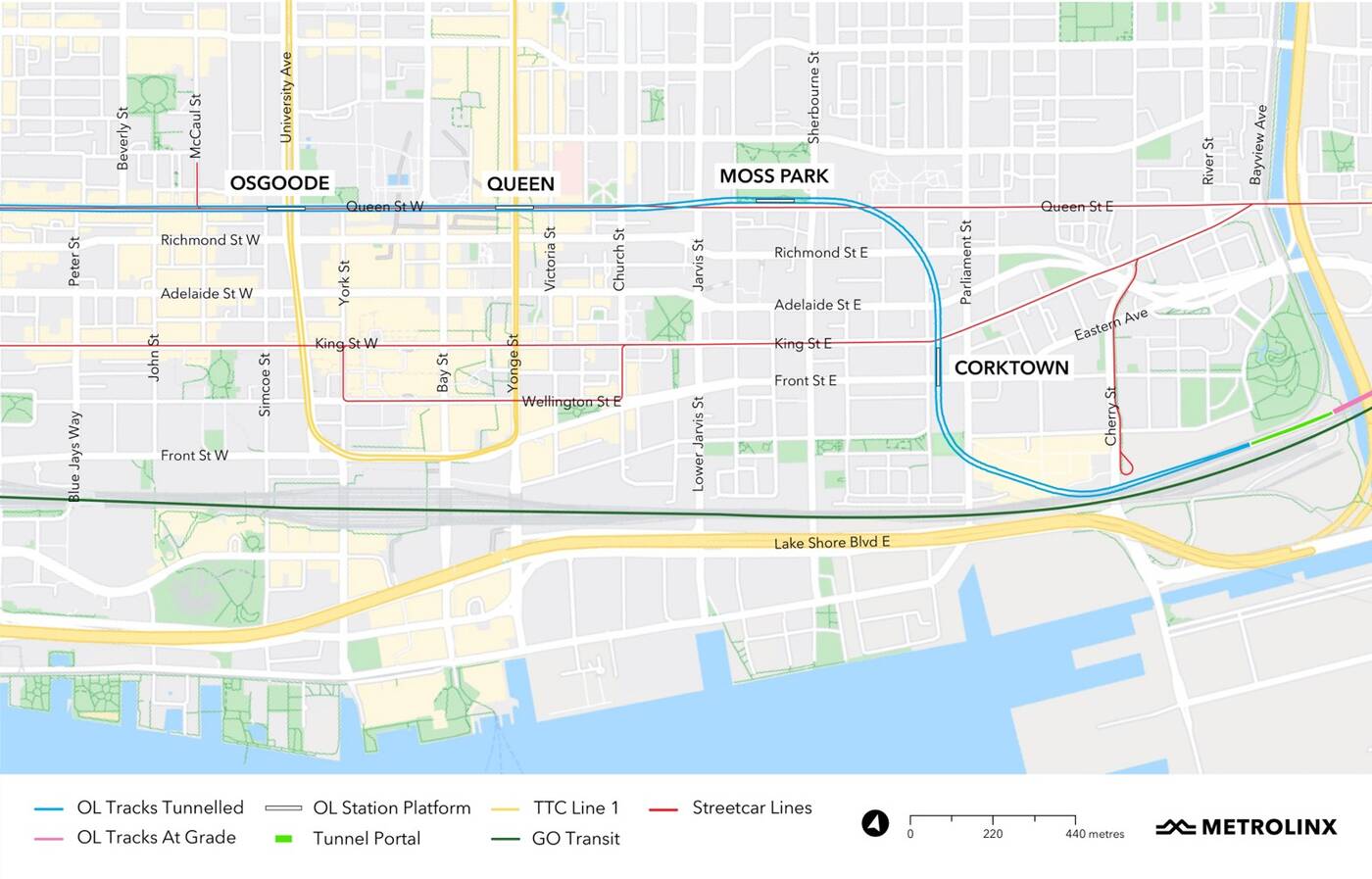 "We are making important progress on bringing more rapid transit to downtown Toronto with the Ontario Line," reads a newly-published update on the project's website.

"The stations at Osgoode, Queen, Moss Park and Corktown will give people fast and easy connections between the Ontario Line and other major transit routes," continues the update.

"The stations have been designed to put customers close to popular streetcar and subway routes and to develop a truly integrated transit network, making it as simple as possible to experience the city and the whole Greater Golden Horseshoe all with the simple tap of a PRESTO card."

From Osgoode to Don Yard, here's what we now know about four more of the 15 total stops on Toronto's forthcoming downtown subway line, which will eventually span roughly 16 kilometres, from Exhibition Place to the Ontario Science Centre. 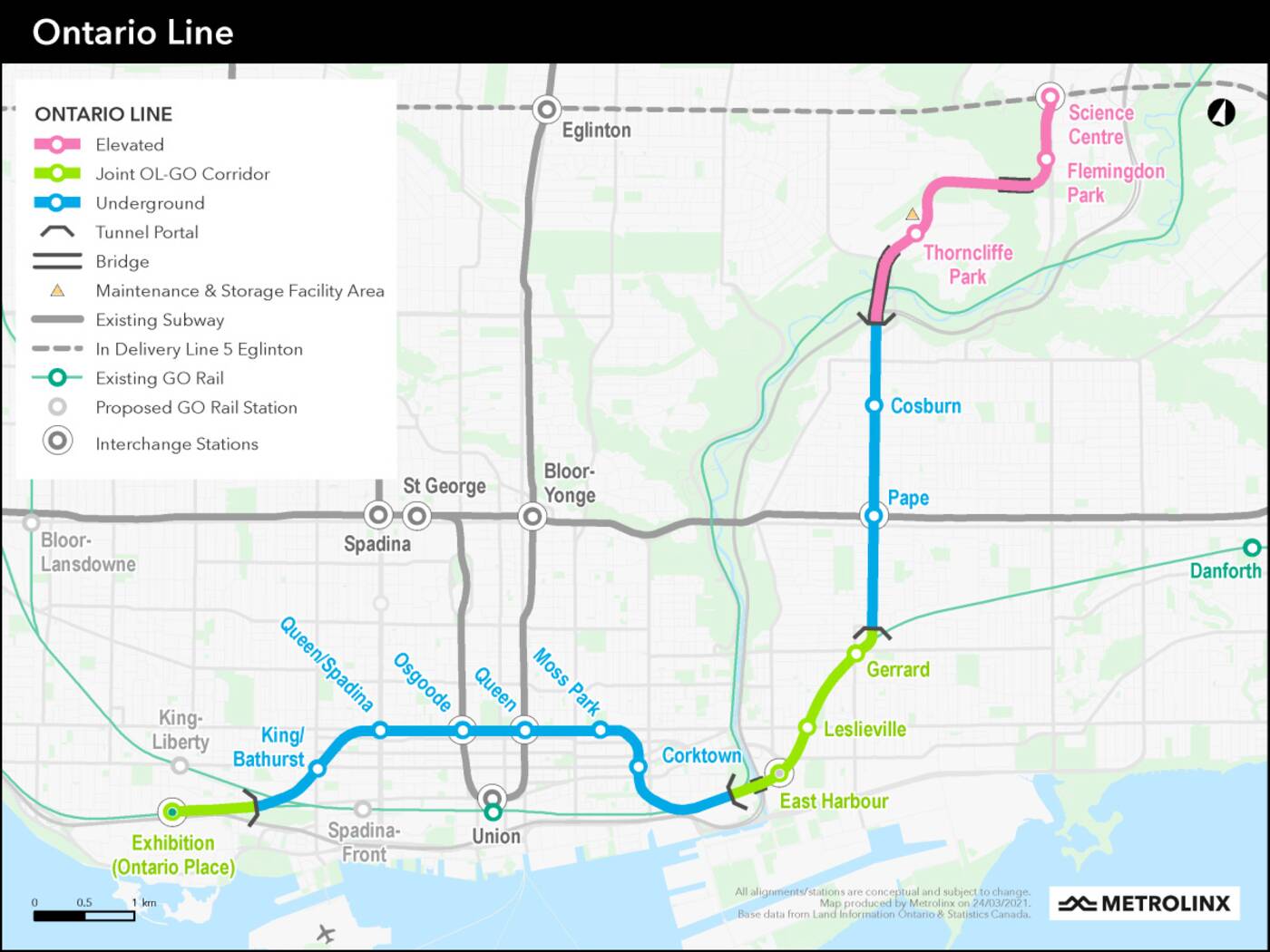 The full Ontario Line will take passengers from Ontario Place to the Science Centre in less than 30 minutes, if all goes as planned. Image via Metrolinx.

The Ontario Line will link directly to Line 1 at Osgoode Station. New station entrances will be constructed on the northeast and southwest corners of the intersection at University Avenue and Queen Street.

This intersection will "create needed capacity for an increasing number of subway customers," says Metrolinx, as well as "make it easy for customers coming from underground to get to directly to eastbound or westbound streetcar stops without having to cross the wide and busy intersection." 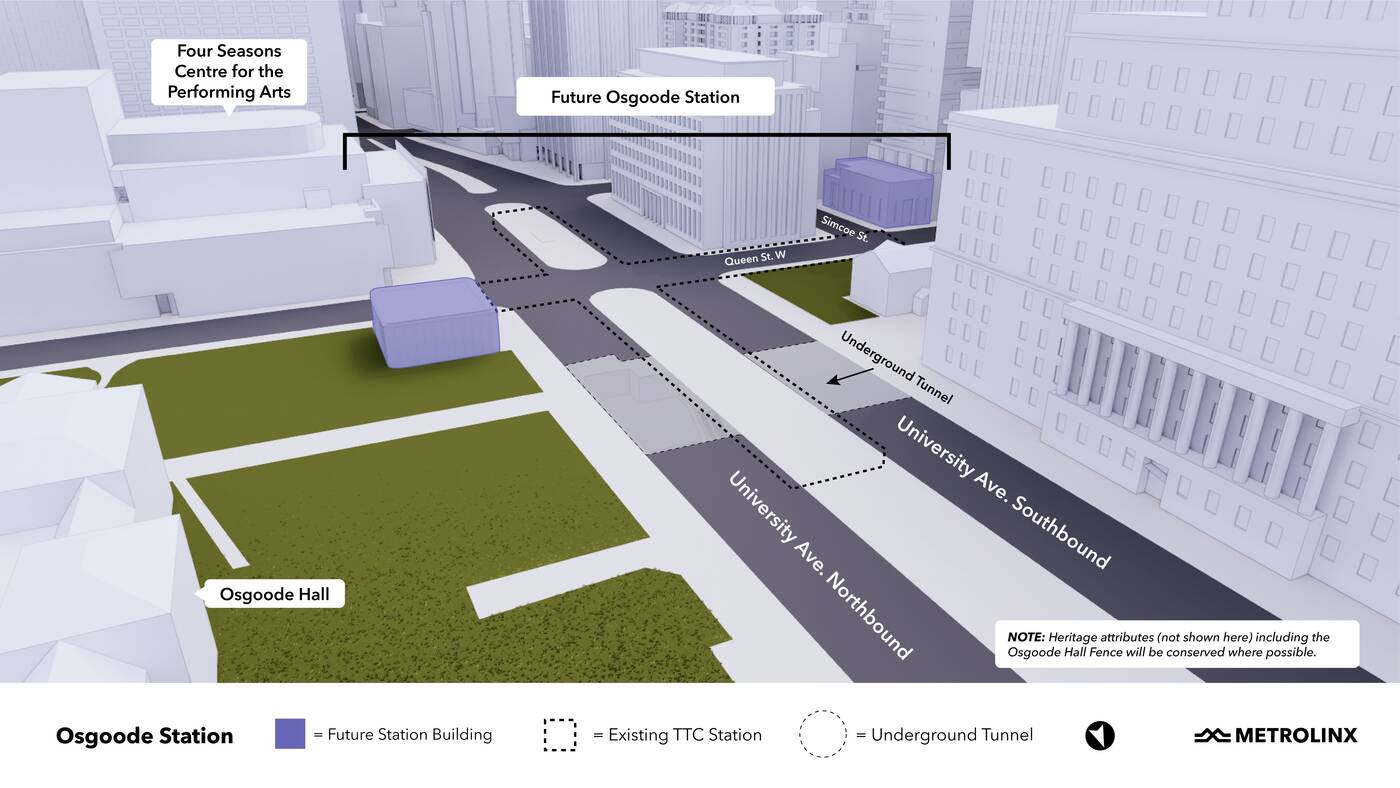 A look at the future of Osgoode Station. Image via Metrolinx.

Billed as a "vital transfer point between Line 1 and The Ontario Line," the new Queen Station will have seven different entry points.

"Located in one of the city’s top spots for work, shopping and entertainment, an estimated 6,700 people are expected to transfer between the Ontario Line, Line 1 and surface routes each day during the busiest travel hour," reads the Metrolinx update. 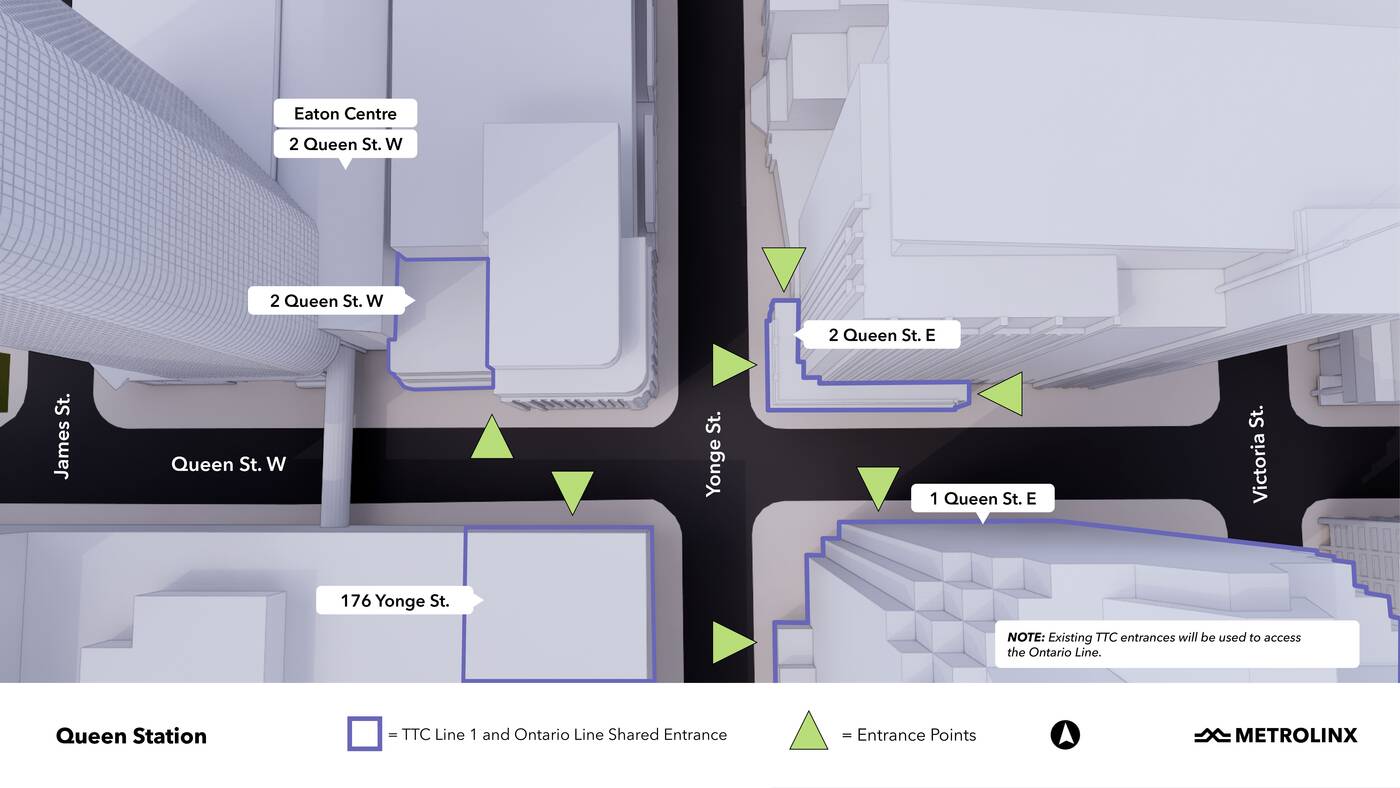 A bird's-eye view of the new entrypoints coming to Queen Station. Image via Metrolinx.

A brand new subway station at Sherbourne and Queen will "connect a dense and fast-growing area of the city to the subway network" with an estimated 7,300 people expected to use the brand new Moss Park station during the rush hour.

The connection should help to relieve congestion on popular surface routes such as the 75 Sherbourne bus and 501 Queen streetcar. Post-construction, the entire Moss Park area will be restored and returned to the city for redevelopment. 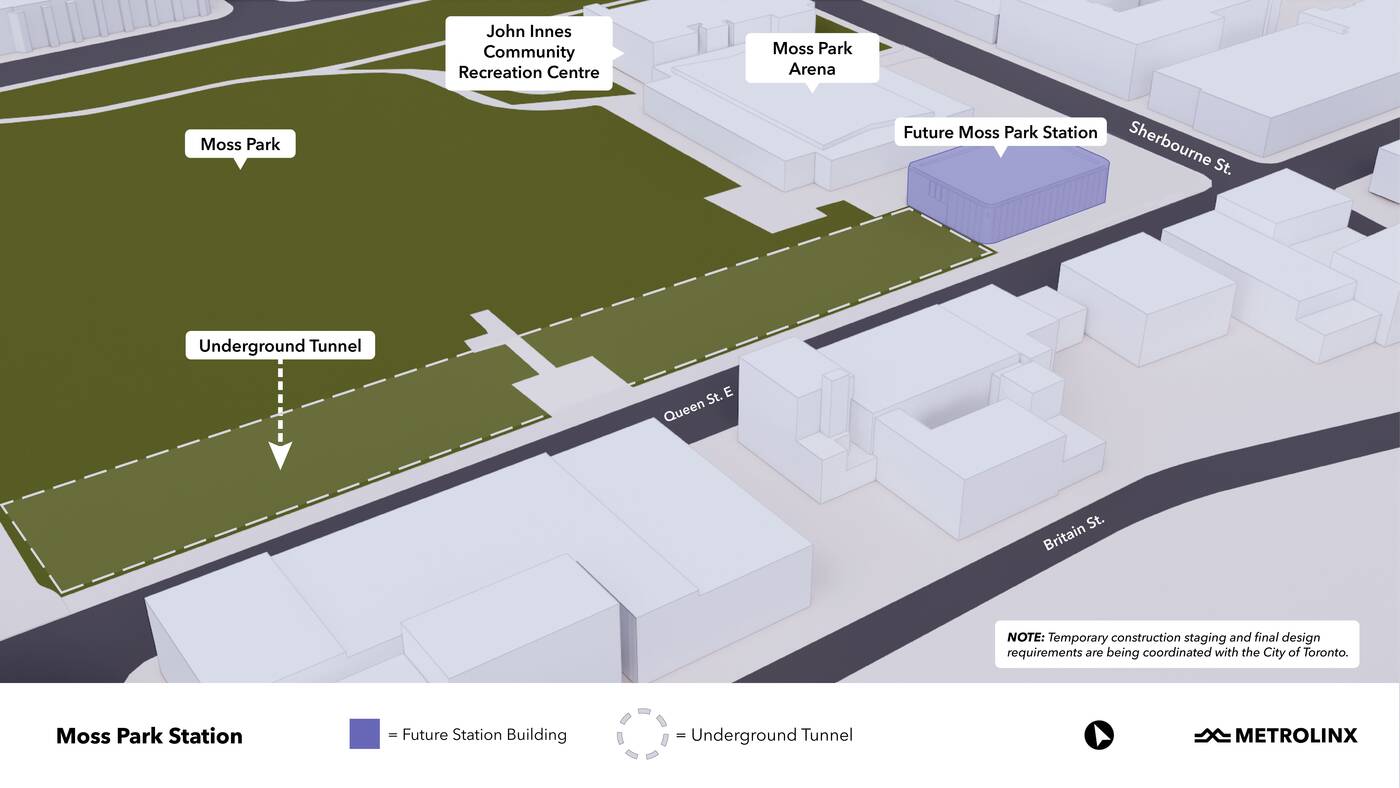 A map of where the future Moss Park Station will be. Image via Metrolinx.

One of the more complicated stations on the line, this new subway portal will conntect Corktown and the Distillery District to the rest of Toronto, alleviating traffic on the popular 504 King Streetcar, 65 Parliament bus, and 172 Cherry Street bus.

"The site south of Front Street which includes the First Parliament site is required to support construction in order to minimize impacts to the street," writes Metrolinx. "Metrolinx will be working closely with Indigenous communities, the Ontario Heritage Trust, the City of Toronto and the public to advance those plans as part of a Heritage Interpretation and Commemoration Plan." 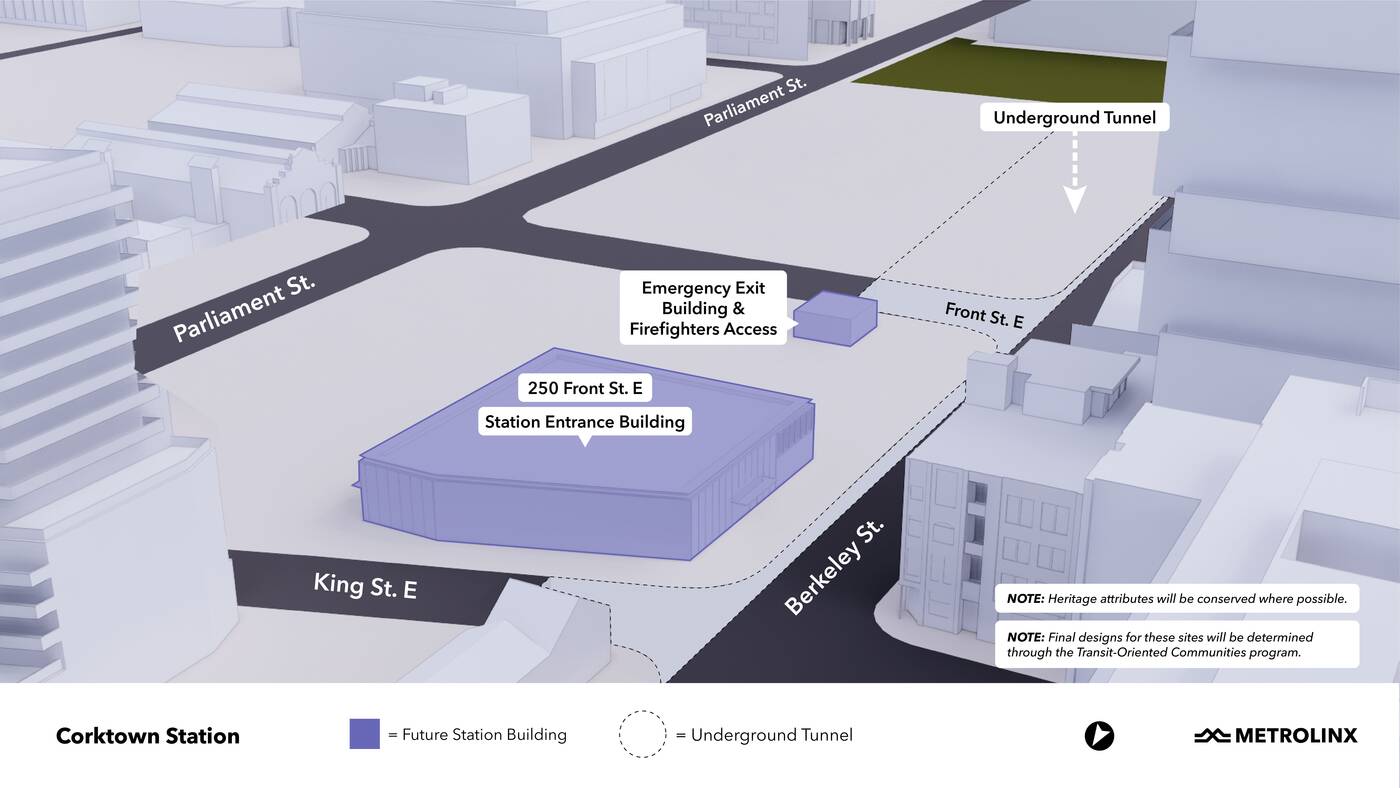 Where the new Corktown Station will be built. Image via Metrolinx.

With details of these four stations in the mix, we now know the precise locations of nearly half the entrance/exit points along the Ontario Line, and will likely learn the rest in short order based on how Metrolinx has chunked out this news in the past.

As for when the people of Toronto will finally be able to hop aboard the long-awaited downtown relief line (or rather, the relief line's replacement), that's anyone's guess.

The province is still projecting a 2027 completion date for the Ontario line, but given how slowly infrastructure tends to develop in this city, many residents are skeptical.

Metrolinx just keeps on coming with the detail drops as Ontario prepares to start building a new subway line through downtown Toronto.

Regardless, we're closer than ever to getting an east-west subway through the downtown core, and that's something worth celebrating.