So long Regulars, Bye bye Banknote, and hello to two new subway portals at one of downtown Toronto's most-frequented intersections.

The Ontario government dropped new renderings this week illustrating how it plans to incorporate an entire subway station into the surrounding infrastructure at this, and two other highly-trafficked junctions throughout the downtown core as part of its forthcoming $11 billion Ontario Line project.

Yes, we knew that a subway station was coming to Bathurst and King, but it was unclear until very recently where the entrances and exits would actually go. 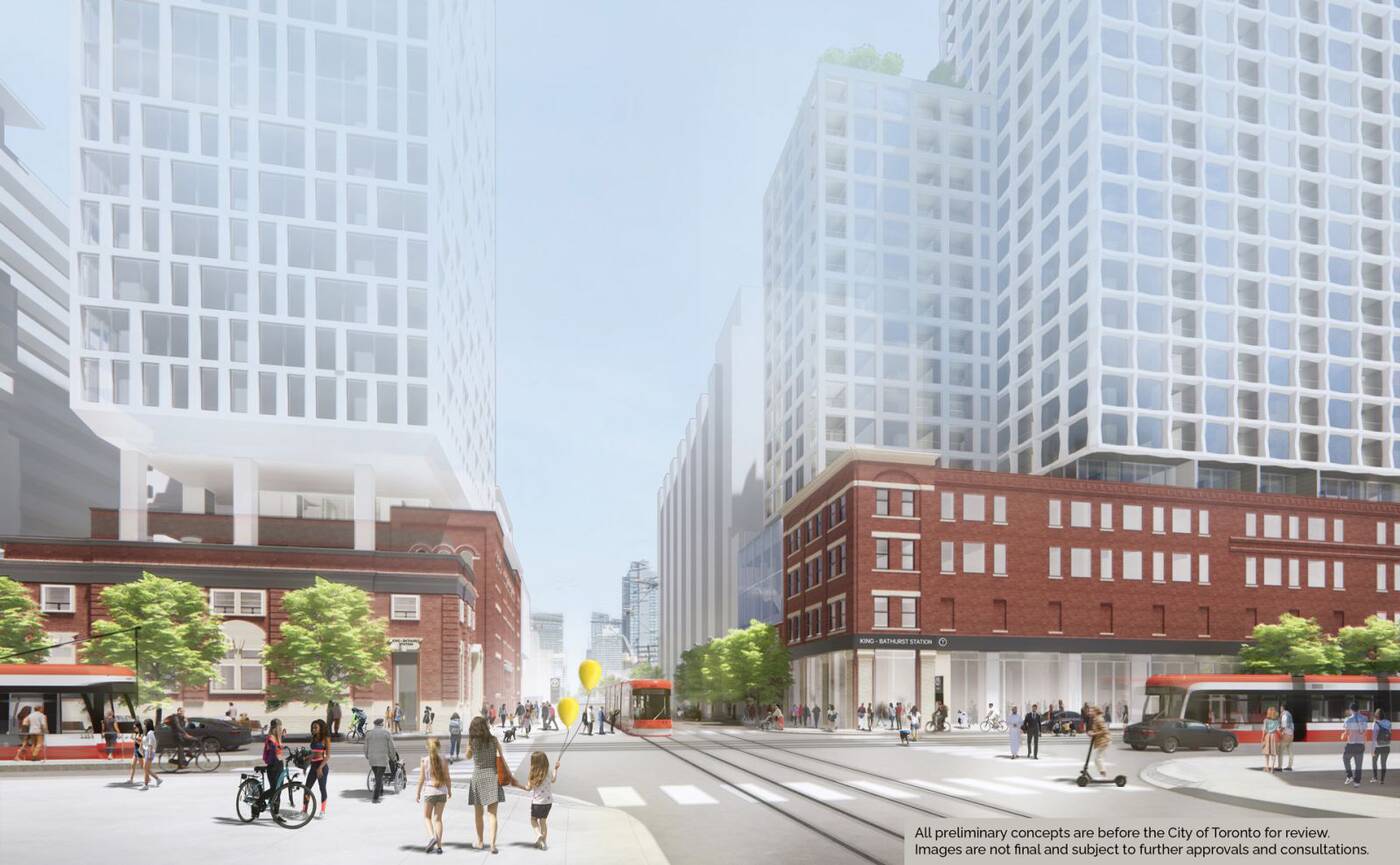 Entrances and exits for the new Ontario Line subway station at King and Bathurst will be positioned on the southwest and northwest corners of the busy intersection. Image via Province of Ontario.

Last week, we learned that Metrolinx plans on putting the portals on the northeast and southeast corners of the intersection so that transit riders can easily transfer over to the 504 King and 511 Bathurst streetcar lines.

This week, we learned that the Ford government is proposing new "transit-oriented communities" atop those portals, as well as on top of other subway stations being built in downtown Toronto.

"The Ontario government is proposing to build vibrant communities along the future Ontario Line subway at the Exhibition, King-Bathurst and Queen-Spadina transit stations," reads a release from the Ministry of Transportation issued Tuesday.

Subway entrances will be constructed where two bars, The Banknote and Regulars, stand now. Image via Province of Ontario.

The renderings aren't incredibly detailed but suggest that those communities will mostly consist of big condo towers on top of existing historical structures, with some nice streetscaping in the mix.

We can see that the new entrances will exist where two bars are now: Regulars at 668 King St. W. and The Banknote at 663 King St. W. Fans of Toronto's oldest bar, The Wheat Sheaf, will be pleased to note that the southwest corner of the intersection will remain untouched (at least in the current proposal.)

The province hasn't said if these new subway stations will exist alongside the bars or replace them entirely, though renderings do suggest that at least some of the historical buildings will be preserved, even if only their facades.

Plans have been in the works for a residential building atop the building in which The Banknote currently lives (former home of the Canada Biscuit Company, built in 1900) for years, but it is not clear how the province's new proposal will affect that development. 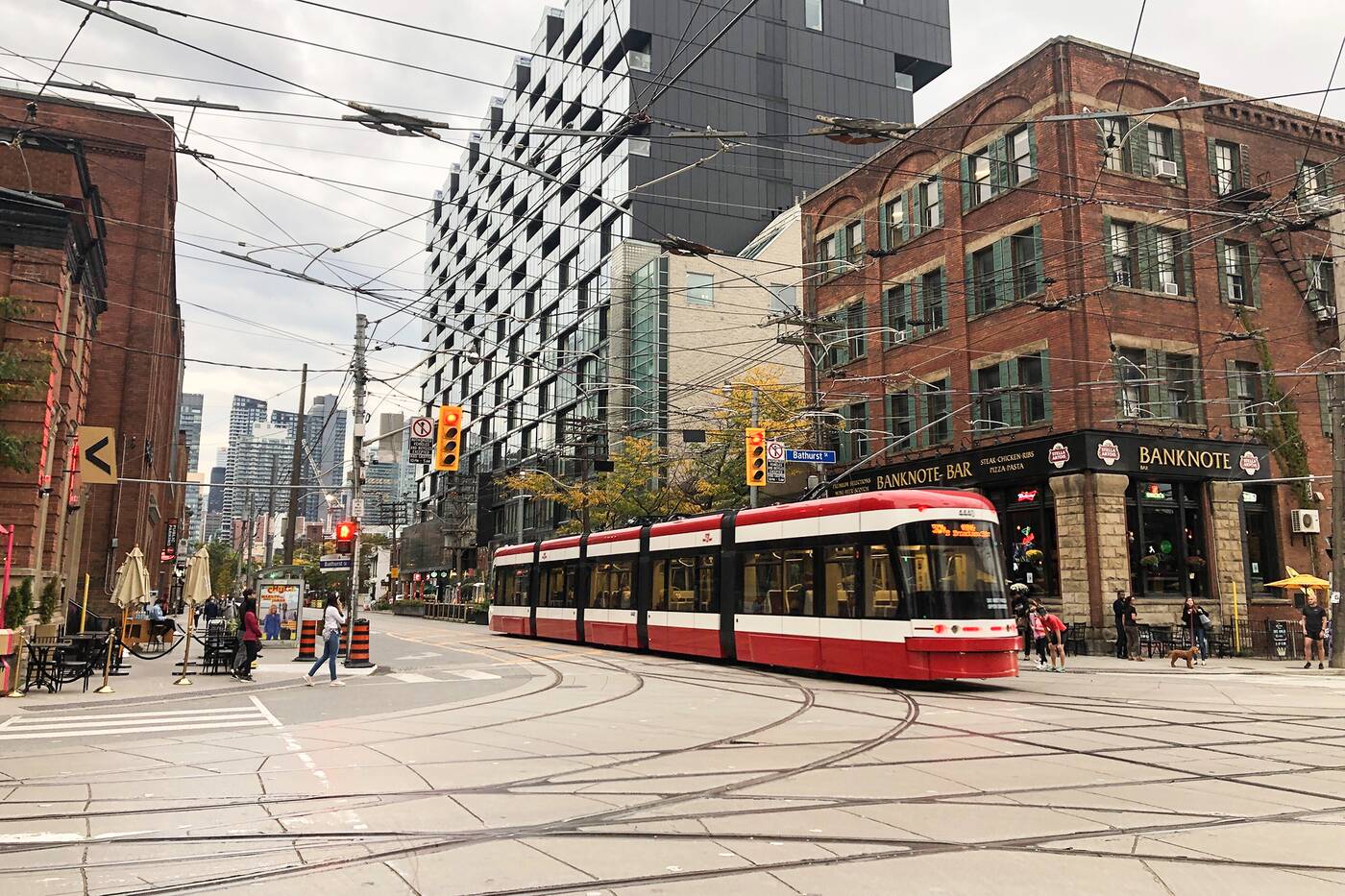 The subject site as it exists today. Photo taken facing southeast from the northwest corner of King and Bathurst. Image via Lauren O'Neil.

What we do know is that King and Bathurst will transform, one way or another, to help Torontonians move around the city with greater access and ease.

If the Ontario Line is built as planned, public transit riders could eventually zip northeast across the entire city, from Exhibition Place to the Ontario Science Centre, on a single, 16-kilometre track in just 30 minutes.

Meant to replace the long-awaited and desperately needed downtown relief line, the roughly $11 billion initiative will be the largest single subway expansion project in Toronto's history... when it actually gets built.

Right now, the line's (optimistic) date of completion is sometime in 2027.