In what amounts to a  momentous political compromise, Toronto Mayor John Tory has agreed to support Ontario Premier Doug Ford's controversial Ontario Line plan — but only in exchange for the province abandoning its TTC subway takeover attempt.

Tory announced the news at Toronto City Hall on Wednesday morning, calling the Ontario Line subway plan "viable" and "a favourable option because of the relief it will provide sooner to the Yonge subway line."

The agreement, which is still subject to approval from City Council, would see Toronto retain ownership of its existing subway network, while the province funds and builds transit expansion projects. The TTC would continue to operate the entire transit network.

This morning, Mayor @johntory announced an agreement with the province that will free up $5 billion for state of good repair work and keep the TTC in the City's hands. This was achieved by being at the table and we will continue to do so to advocate for our communities. pic.twitter.com/Afu4zZa7BR

Moving forward, Ontario and Toronto would work together on such projects as the Ontario Line, the Scarborough subway and the Eglinton West LRT.

The province would additionally support the city putting its own expansion funds (roughly $5 billion worth) toward "state of good repair" and priority projects like the Eglinton East LRT and Waterfront Transit.

A report released by the city this morning makes clear, however, that there are still many, many details to be worked out.

This is really big for the City. The no-more-upload bit is significant, sure, but the province freeing the City of any obligation to put up capital dollars is HUGE. Amazing that the province put this on the table. pic.twitter.com/Am4SN8ANkK

"The Province has stated a project timeline with a 2027 in-service date for the Ontario Line, two years sooner than the accelerated Relief Line South schedule," reads the report, prepared by TTC and city staffers.

"Given the current stage of the project and the variety of design challenges that remain to be overcome in a project of this scale, further design and development must occur before City and TTC are able to assess the validity of the stated timetable or the estimated cost at this time."

Should everything go according to Ford's transit plan as it was announced in April, the build will cost around $10 billion and result in a new, 15-kilometre subway line with 15 stations running from Ontario Place to the Ontario Science Centre. 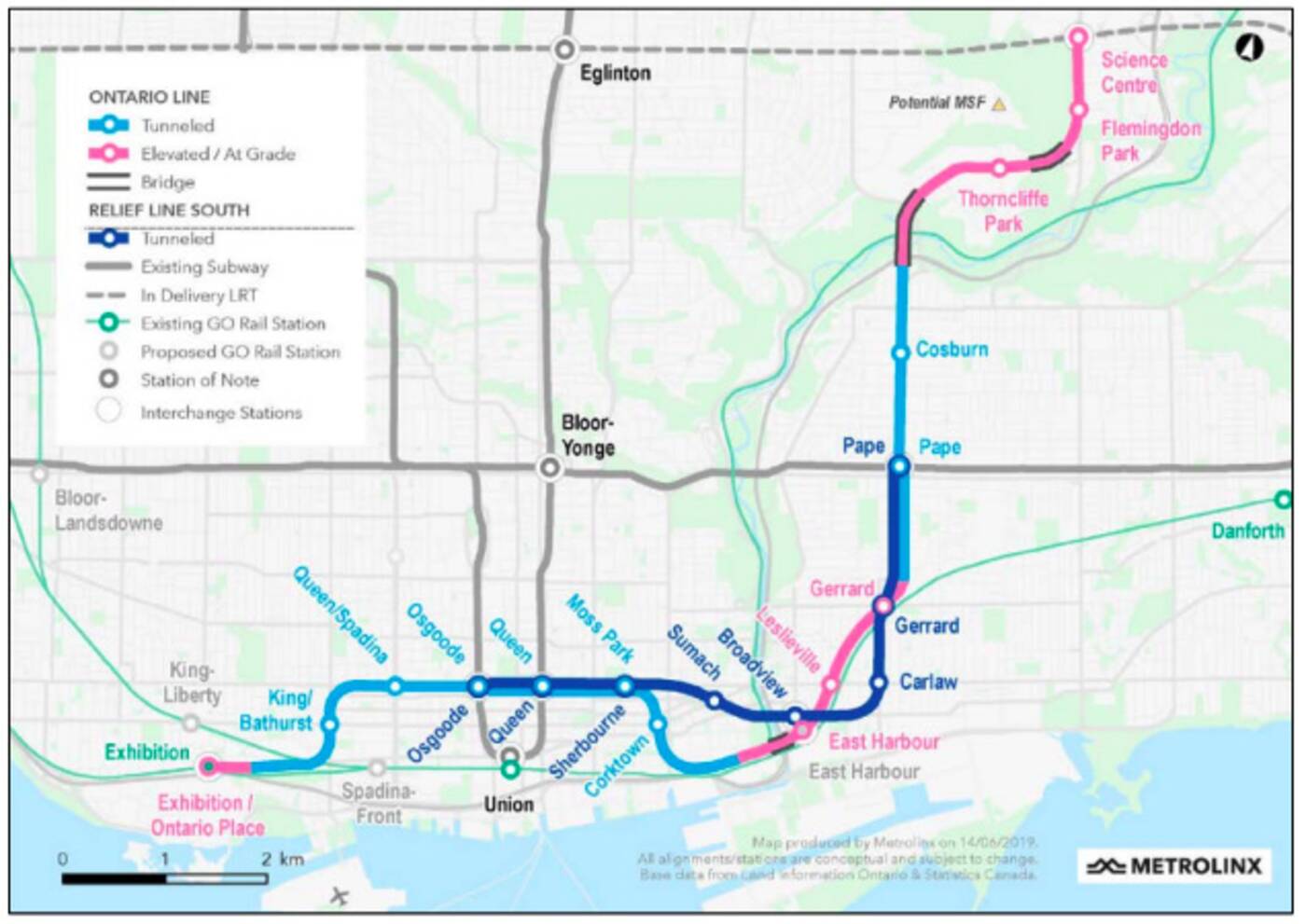 The most recent proposal for the province's Ontario Line subway running through Toronto. Image via Metrolinx/City of Toronto.

Toronto's own downtown relief transit line would still be scrapped, but the report notes that all of the "sunk costs" invested into planning it (and the Scarborough subway) would be reimbursed by the province.

"Last December, we were faced with a provincial government that was committed to uploading our entire subway system," said Tory during his press conference this morning.

"They were prepared to break up the Toronto transit system and impose a split system that in my view would not have worked for the average rider... We argued the TTC should stay together, in the city's hands."

"But we also knew, especially given the province's outdated but nonetheless real legislative power over these things, that we should at least try to sit down with them to see if we could come up with something better," said Tory.

If Council accepts the agreement, the City will continue owning the subway. Council endorsed that unanimously. Province would pay for expansion projects and the City would free-up $5 billion for other priorities like our $33 billion TTC repair backlog and other expansion projects

The mayor is celebrating the resulting agreement as a victory for Toronto.

"We have defended our TTC, found a way to move forward on transit expansion, and to invest in improvements in our existing system, and we have done so with an increased financial commitment from the province,"

"That is tremendously good news for the residents of Toronto I was elected to represent."

Further to this, if Justin Trudeau's Liberal Party is re-elected on Monday, all three levels of government will reportedly be in agreement on the issue.

A senior federal party official told The Toronto Star confidentially in a piece published Wednesday that "a Trudeau government would abide by the wishes of city council if it votes for the line."

"John Tory has been very persuasive," said someone referred to by The Star as a "high-ranking federal official."

"This is something that is up to the city. It is not for the federal government to be deciding where transit should be built. Mayor Tory deserves a lot of credit for moving this forward."