Toronto is getting a new subway station at King and Bathurst

One day, at an unspecified date in the future, you'll be able to ride the subway in Toronto from Exhibition Place all the way to the Ontario Science Centre.

I don't mean "walk to a streetcar and then transfer to a subway and then transfer between several buses until you reach your destination," either; if Metrolinx and the Ford government's forthcoming Ontario Line is built as planned, public transit riders could eventually zip northeast across the entire city on a single, 15.5-kilometre track.

Meant to replace the long-awaited and desperately needed downtown relief line, the roughly $11 billion initiative will be the largest single subway expansion project in Toronto's history.

It's safe to say, based on where and how Metrolinx plans to build out the infrastructure, that Toronto will look quite a bit different when all is said and done (in 2027, by optimistic estimates). 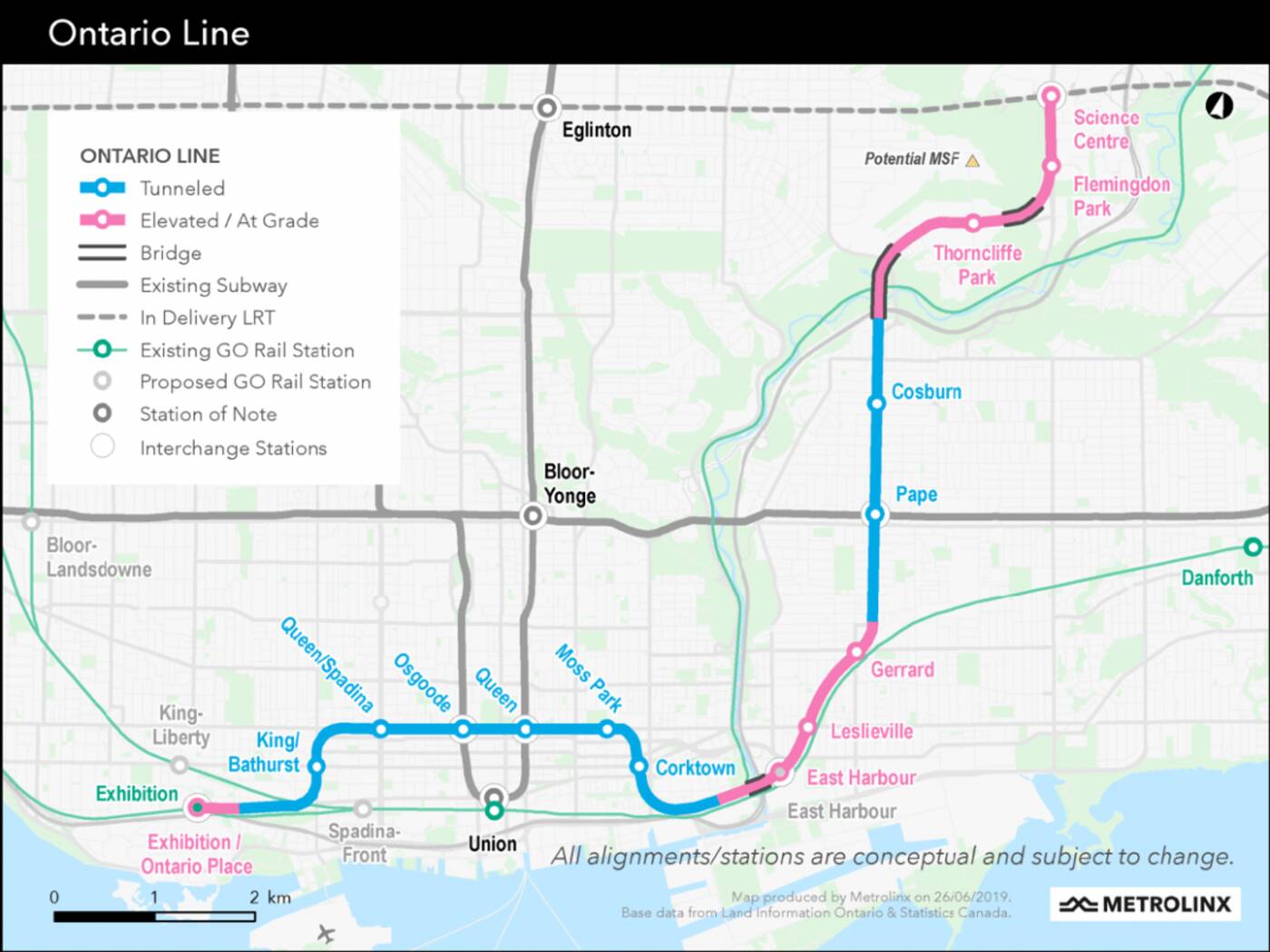 A map of the planned Ontario Line as of September 2020. Image via Metrolinx.

Some decisions, enmeshed in controversy, have yet to be made —  key among them, those related to the destruction of parks, impacts on local business and the delay of important construction projects like a new affordable housing complex on Don Mills Road.

At the very least, we know that we'll have 15 new subway stations across the city, and that the new line will make use of a long-abandoned underground "ghost stop" known as Lower Queen Station.

With early construction set to begin next summer, Metrolinx has started rolling out details regarding what we can expect at the neighbourhood level across four chunks of the new Ontario Line.

"Metrolinx is sharing refined plans for the Ontario Line as teams learn more about the geography and infrastructure — both above ground and below the surface — and the communities the new route will serve," wrote the provincial transit agency when introducing the first of these chunks — the line's West segment — earlier this month.

"Refinements to the Ontario Line route between the Exhibition Grounds and Spadina Avenue... will give riders shorter trips and reduce construction impacts by straightening out two bends into a diagonal line that will go in and out of a new station at King and Bathurst."

A first look at the West segment of Metrolinx's Ontario Line, running from just past Liberty Village to Queen and Spadina. Image via Metrolinx.

That's right, a new station at King and Bathurst — but don't go pre-mourning the loss of Toronto's oldest bar, The Wheat Sheaf, just yet.

"We discovered that if we rotated the King-Bathurst Station diagonally, we could provide riders a more direct route, reduce our capital costs and help reduce property impacts. It just makes more sense when you look at the big picture," said Metrolinx deputy techinical director Michael Tham of the change.

Metrolinx says that this change in alignment "also means that a favourite pub for many Torontonians will stay standing long into the future — the historic Wheat Sheaf Tavern on the corner of King and Bathurst."

The newly-renovated 170-year-old bar is thus saved by the designers who decided to straighten their formerly-planned 90 degree turn into a more gradual, diagonal curve.

No word yet on where the entrance to the underground station at King and Bathurst will be, but Metrolinx says it will connect to both the 504 King and 511 Bathurst streetcars. 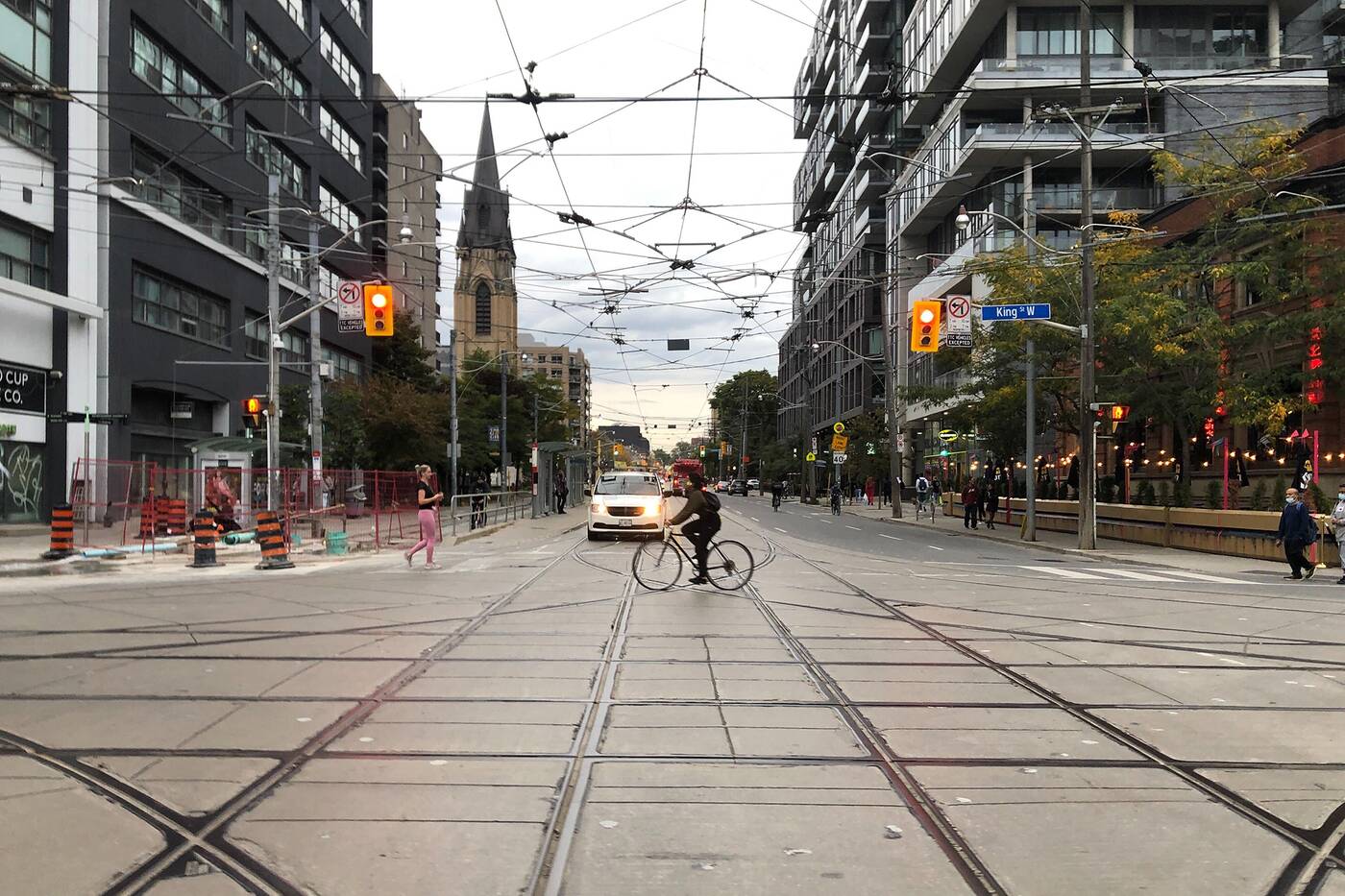 The Wheat Sheaf, Banknote, Regulars, and a mess of construction currently anchor the corners of King and Bathurst. Photo by Lauren O'Neil.

This means that, in addition to providing relief for the TTC's overcrowded Line 1 and 2 subway routes, the Ontario Line could help ease up pressure on the notoriously-busy 504 streetcar... if the city ever goes back to its bustling, pre-pandemic self, that is.

Everyone else will love the fact that they can get from the Ex to a new underground station at Queen and Spadina in one straight shot.

"Straightening out the curve and travelling diagonally will give customers a ride that is smoother, more comfortable and faster," writes Metrolinx of the Ontario Line's West segment between Ontario Place and the Fashion District.

"This change reduces track maintenance, which means less risk of delays due to repairs making for a more reliable service."

I sincerely hope they're right.