Toronto residents are continuing to fight back against the forthcoming Ontario Line subway — or at least, some specifics of how it's slated to be built.

Though most of the city can easily get on board with a new transit project that will help alleviate TTC congestion and get commuters around different parts of the city faster, some residents are concerned with the fact that portions of the new line are likely going to be built above ground.

These segments will be near Ontario Place, through Leslieville/Riverside for three stops around the new East Harbour Station, and from Thorncliffe Park through Flemingdon to the Ontario Science Centre, partially through existing GO Transit corridors.

Groups like the EastEnd Transit Alliance (EETA) in particular are contending the current plan, saying that it will greatly disrupt their neighbourhood.

EETA is now circulating a map that shows what they expect the geographical extent of the impact will be on the areas surrounding the proposed above ground tracks. 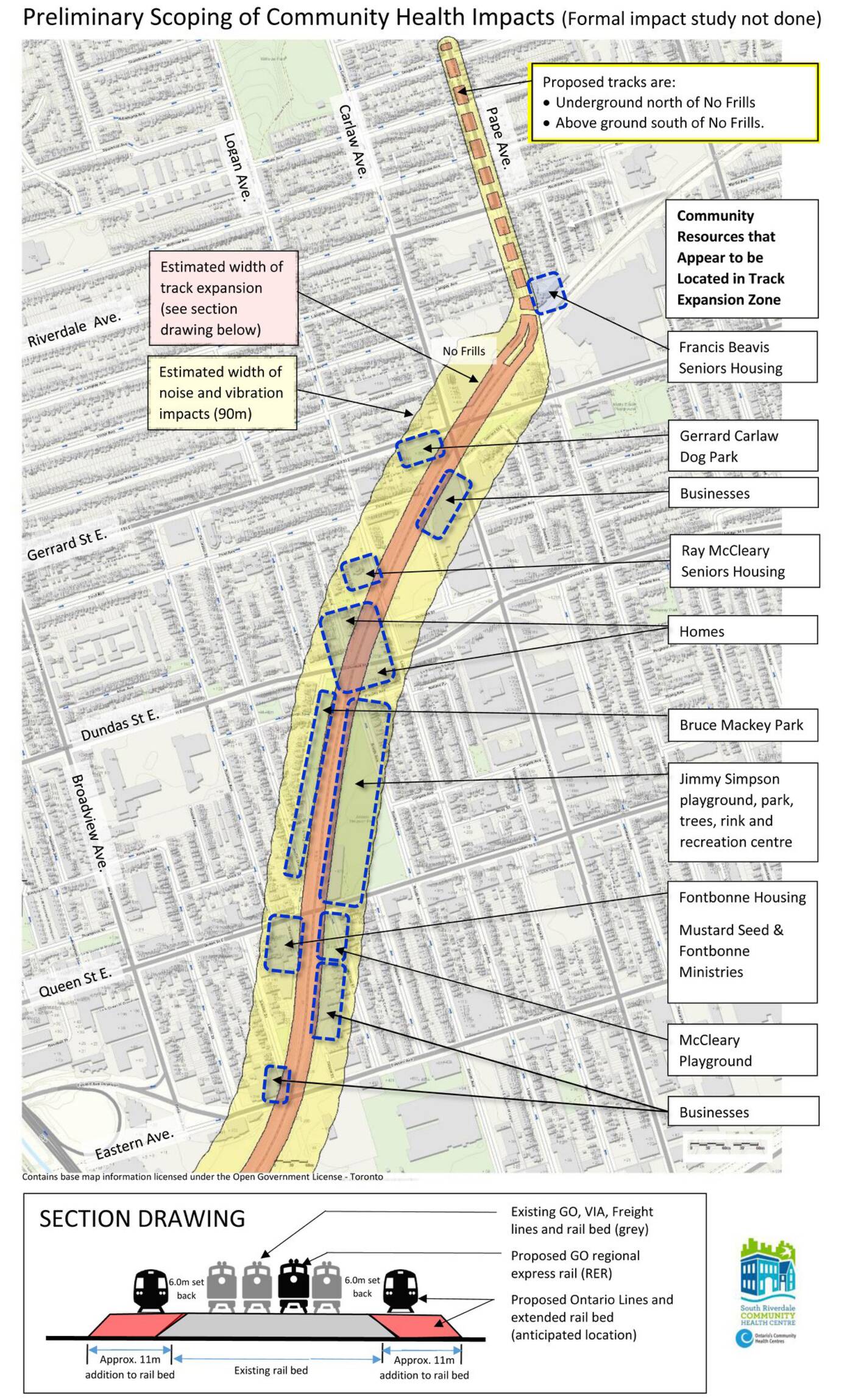 The map indicates the path of the proposed Ontario Line in Leslieville if it gets built above ground.

It is worth noting that Leslieville already has existing rail beds for other active transit lines, so a completely new corridor will not need be constructed, as Metrolinx prefers to widen the current one in order to save costs to complete the project.

Still, Toronto residents say above ground parts of the line will mean the disruption of things like construction projects — notably, an affordable housing complex on Don Mills Road — and interference with parks, housing, and local businesses that appear to be in the way of or concerningly close to the proposed track expansion.

Most concerning perhaps is the potential demolition of Jimmie Simpson park and community centre, a vital green space in the area that will only become more needed as residential density increases along Queen East with all the new condos.

The map also suggests numerous homes and popular local businesses such as brunch stalwart Bonjour Brioche could be demolished if the line is built above ground.

Metrolinx has reiterated that putting parts of the line above ground will be more cost effective: a bridge over the Don River to the East Harbour transit hub is a far cheaper option than digging a tunnel under it.

Some say the cost savings for this approach are overstated if Metrolinx needs to buy a significant number of properties at current market values and demolish all the buildings in order to build the tracks.

What is undeniable is that downtown Toronto needs an additional transit line of some sort as the population continues to grow.

Metrolinx, an entity that takes its orders from the Ontario government, held a number of well-attended open houses about the new subway line last month, but it seemed that many of the public's questions were left unanaswered and concerns, unassuaged.

The 15-stop line, which will snake through downtown from Exhibition/Ontario Place in the southwest to the Science Centre in the northeast via Queen Street and Pape Avenue, is due to be finished as early as 2027.