What do the chairman of Rogers Communications, the niece of Toronto Raptors founder John Bitove, and former U.S. president Donald J. Trump all have in common (aside from having tons of money)?

They were all spotted hanging out the latter rich person's exclusive Mar-a-Lago Club in Palm Beach, Florida, this past weekend despite Ontario's stay-at-home orders, much to the shock and revulsion of Toronto "society" watchers.

Even worse, the Canadian elites weren't covertly photographed by some third-party gossip hound — they were proudly outed by one of their own, fashion philanthropist Suzanne Rogers.

Suzanne, wife of Edward S. Rogers III, posted several videos and photos as Instagram stories on Saturday morning, all of which appear to have been taken on Friday evening.

"Dinner last night at @themaralagoclub" reads the text overlay on one video showing a plaque denoting Trump's purchase of the resort in 1985.

"Boys happy to dress up!" reads another in which her husband and two sons enter the Palm Beach landmark. Another clip simply shows a (rather flattering) portrait of a young Trump, captioned only with "The 'Donald'."

"With my godson and @jennabitovenaumovich," wrote Rogers when sharing a photo of herself, Jenna, and Jenna's young son. It is not clear if any other members of the Bitove family were present at Mar-a-Lago this weekend. 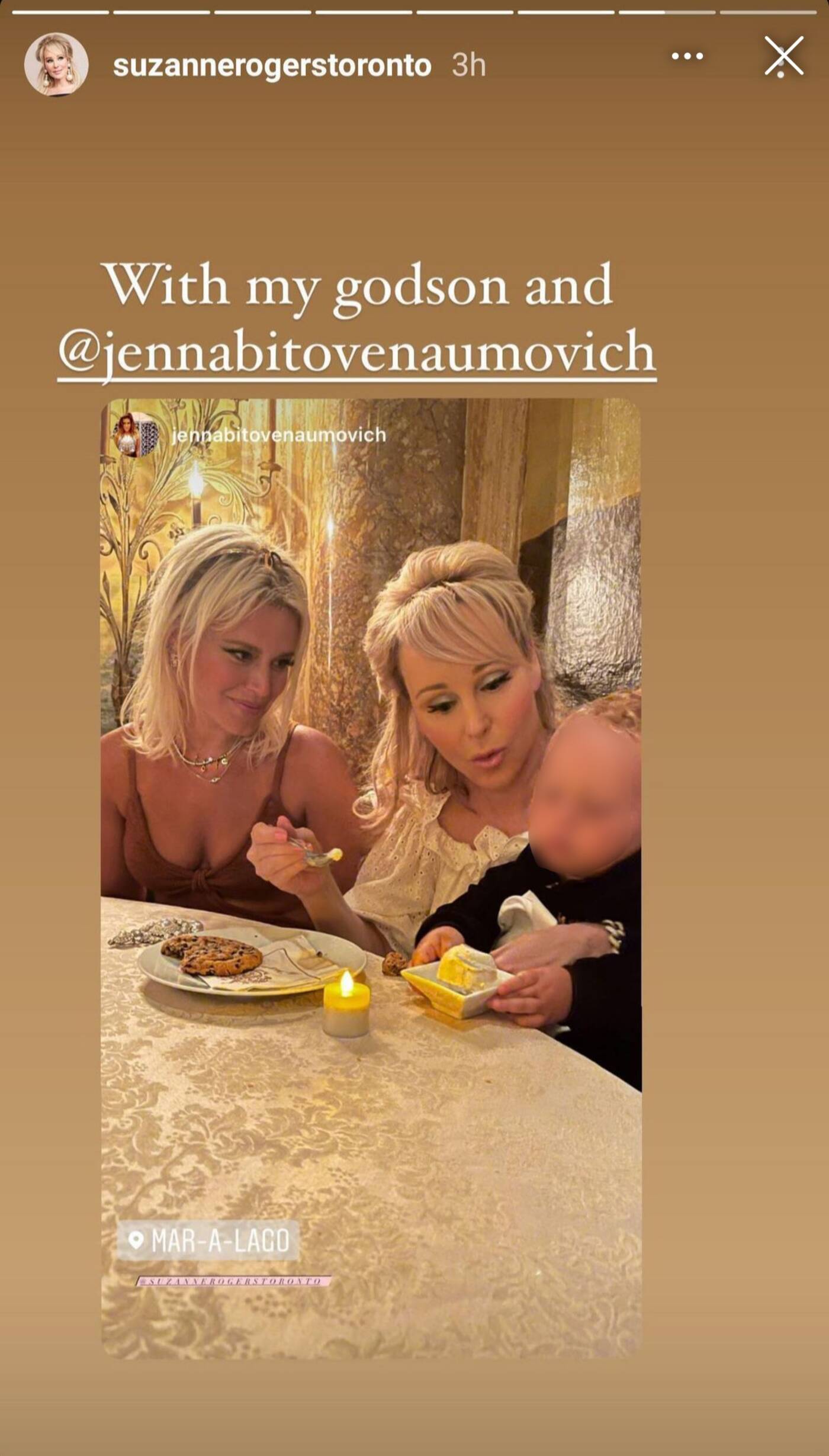 The most controversial of these posts is one that actually pictures members of the Rogers family — Edward, Suzanne and their two sons — posing with Trump himself.

"A special way to end the night!" wrote Suzanne when sharing the photo, which began circulating widely online not long after she shared it Saturday morning.

Many people in Toronto were annoyed, to say the least, and for several reasons, the first of which is the fact that nobody is supposed to be travelling right now amid the COVID-19 pandemic and provincewide shutdown orders.

While it's not illegal, Ontario's provincial government currently advises all residents not to "travel outside your region or the province unless absolutely necessary."

This is essential travel @fordnation?

It's important to note that both families do own homes outside of Ontario, and that they may not even be living in Toronto right now.

Still, posing with Donald Trump in Florida while his home province is under lockdown isn't a great look for someone who controls one of Canada's largest telecoms.

"It truly takes a staggering amount of ignorance, and a similarly immense lack of empathy, to not understand or care how dispiriting and infuriating a thing like this was going to be for people — even people who have already accepted, as we all have, that shitty people and shitty companies are in charge of a whole lot of the things we love," wrote sports journalist Andrew Stoeten of the photo.

"What in god's green f*ck is Edward S. Rogers, chairman of the Toronto Blue Jays baseball club, scion of the Rogers family, son of the man who absurdly towers in bronze (or actually, presumably, some shittier, cheaper alloy) above the southeast courtyard of the building formerly called SkyDome (now, naturally, the Rogers Centre), doing in Florida, at Mar-A-Lago, during a pandemic, smilingly posing with his family alongside the racist dog-whistling king of the dumbshits?

Sure, sure, he's just doing the whole 'being a billionaire failson' thing, but could ya maybe at least try to read the fucking room a little bit here?"

Twitter users are now calling for a boycott of the Rogers network in light of the photos, but what else is new?

"In case anyone needed more proof the that #Rogers family were horrible, they are currently at Mar-a-Lago hanging out with Trump. Maskless," wrote one on Sunday. "Canada needs to know where their money is going."

"When Canadian monopoly biz owners want to show Canadians that they are 'for the people.' Gross," wrote another.

"Great way to show you've got a white hood in your closet back in #yyz."

Suzanne is also facing heavy backlash over the photos she shared, thanks in part to her deep involvement with the local fashion community.

Oft-referred to as the "fairy godmother of Canadian fashion," Rogers is a well-known philanthropist who has donated millions of dollars toward emerging local designers and raised millions more for local charities through her fashion-focused gala events.

Her namesake fellowship program at Ryerson University, The Suzanne Rogers Fashion Institute (SFRI), was recently renewed for five years with a $1 million donation described as "the largest contribution made by a donor in direct support of emerging fashion designers in the country."

Thus, it was quite awkward when The Ryerson School of Fashion condemned the Trump photos on Instagram... and even more awkward when they retracted the post.

They really backed down that fast eh? pic.twitter.com/5i583Ag6SY

The original statement posted to Instagram by Ryerson's fashion school invited Suzanne Rogers to "discuss the impact that Trump and his community has had on further harming members of the fashion industry who are low income, Black, brown, Asian, disabled, Indigenous, trans, queer, and/or part of other systemically marginalized communities."

That post was replaced in short order with a statement that read: "A previous post from the School of Fashion was not endorsed by Ryerson University and does not reflect Ryerson's views."

"We do not believe social media is the appropriate platform to judge the actions of others," said the statement, which, as the fashion school was careful to note, was provided by Ryerson University brass.

"Ryerson's values have long defined who we are and will always guide where we are going. They are the basis upon which we have built our uniquely vibrant, diverse and inclusive culture."

I can’t imagine what it feels like to be a @RyersonFashion student right now. If you’re pissed about how the university has responded to Suzanne Rogers’ gleeful Trump selfie, tell them—I did pic.twitter.com/gkLSCticgI

This speedy retraction only served to infuriate people in Canada, many of whom say that it's evidence of Ryerson favouring donors over students and community members.

According to campus newspaper The Eyeopener, the Rogers family has donated almost $34 million to various programs at Ryerson University over the years.

As of 2017, the Rogers clan had an estimated net worth of $11.57 billion, making them the fourth-richest family in Canada.

According to a Wikipedia entry for Edward S. Rogers III, they are descendents of Timothy Rogers, "the colonist settler of Newmarket, Ontario and Pickering, Ontario."