If the COVID-19 pandemic leaves Toronto with anything positive (aside from lower rent prices), it's got to be a deeper city-wide appreciation for local wildlife.

Whether due to less traffic on roads, fewer humans in office parks, or merely the fact that we're all spending more time outside while businesses remain closed, wild animal sightings have increased over the past year in Canada's largest city — at least in terms of photos posted online.

From stunning red foxes and mysterious coyotes to hundreds of species of birds, animal photographers both amateur and professional continue to reveal the magical creatures living all around us through social media, often through nature-focused Facebook groups like Beauty of The Don and Toronto Birding.

Sometimes owls dominate the conversation. Sometimes it's small, furry rodents. Sometimes it's raccoons, which have long been popular as subjects among urban photogs. Often the stars of the show are deer, especially majestic horned bucks.

Lately, however, turtles have emerged to take centre stage on the Toronto wildlife photography scene — and the reasons behind this phenomenon go far beyond that fact they're cute.

Turtles are really cute though. 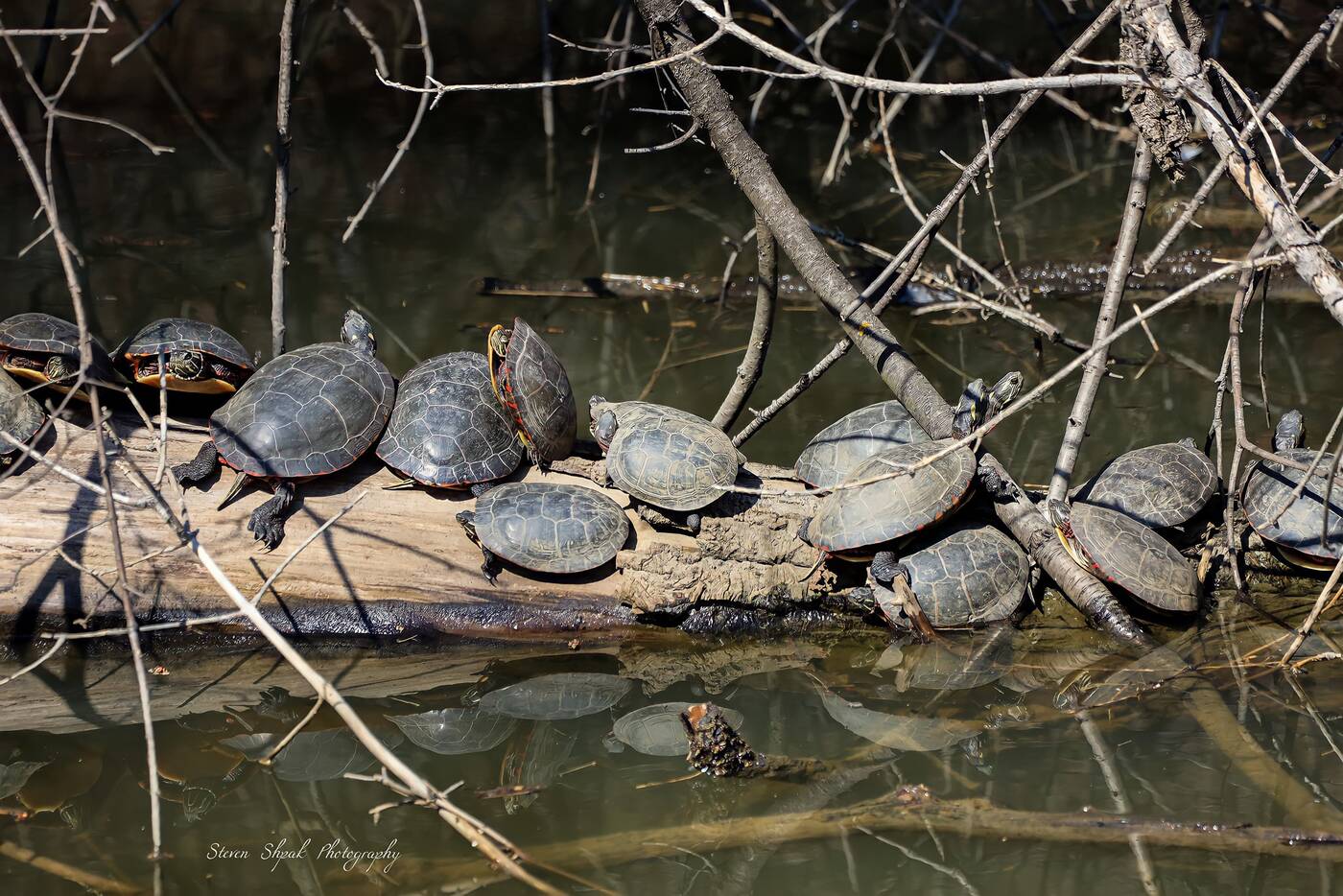 Toronto turtles have been clamoring to get some of that sweet, sweet early spring sunshine in recent weeks. Photo by Steven J. Shpak Jr.

"So busy they were parking on top of each other and rolling off into the pond," he reported. "Fun Facts — You can count the rings on a painted turtle to see its age, just like a tree."

Jim Crawford posted a similarly-popular shot of some painted turtles hanging out near the Evergreen Brick Works, later telling blogTO that "seeing them out of hibernation and warming up in the sun just shouts SPRING!"

I went for two walks today and saw a lot of turtles 💜🐢 pic.twitter.com/hvhS1dzzL3

Photos of sunbathing Toronto turtles popped up all over Instagram and Twitter last week as humans dealt with stay-at-home order boredom by taking nature walks.

It wasn't only the abundance of people going outside and capturing pics with their phones that led to increased turtle content, however.

Dr. Sue Cartairs, executive and medical director of the Ontario Turtle Conservation Centre, confirmed to blogTO that local turtles are actually out early this year thanks to that gorgeous spate of weather we just experiened.

"The mild weather has them coming out of hibernation ahead of time — they like it not too hot and not too cold, in order to start moving," she said.

"I think people are seeing more right now as a result, plus the leaves aren't out yet to block the view and perhaps people have a bit more time to observe."

Dr. Cartairs explained that Toronto "has a surprising number of turtles," most of them snapping or painting.

"We quite frequently get turtles admitted from that area," she said of Toronto. "Our hospital sees turtles from all over their home range in Ontario, and we admit over 1,000 each season."

There are eight species of turtles living in Ontario, half of them endangered or threatened, all of them considered "at risk" by Canada's federal government.

Cartairs says many of Ontario's eight species, including the Blanding's turtle, have been spotted at one point or another in the Toronto area — particularly around Tommy Thompson Park on the Leslie Street Spit.

"If you build it, they will come!" she says of the man-made wetlands, which have become known for attracting not only turtles but many different and unique bird species.

While fine to take pictures of turtles from afar, experts say never to remove them from the wild — and to please, please watch where you're driving, especially right now.

"Both males and females will be travelling at this time of year, with females nesting usually about June time," Cartairs told blogTO.

"They can travel far distances across land, so it's not unusual to see them quite a distance from water; looking for mates, looking for their favourite hangouts, and in nesting time, looking for a place to lay eggs."

Aside from habitat loss, Cartairs says road mortality (read: turtles getting hit by cars) is the top reason for populations declines. Boats, fishers and poachers are also huge problems for turtles.

"Healthy turtle populations depend on adults living a very long time, since not many turtles ever make it to adulthood (it can take upwards of 60 years for a snapping turtle to have a chance of replacing herself in the population), so early adult losses can be devastating," says Cartairs.

"The general public can help out a lot with turtle conservation; driving and boating safely, not taking them from the wild, providing safe habitat at their cottage, or even helping a turtle across the road  — always in the direction they were headed! And of course ONLY if it is safe to do so."