Hinder Property is a quiet and picturesque natural area in north Toronto.

Located at Bathurst Street and Sheppard Avenue West, the natural area is bordered by Earl Bales Park to the south and the West Don Parkland to the north. 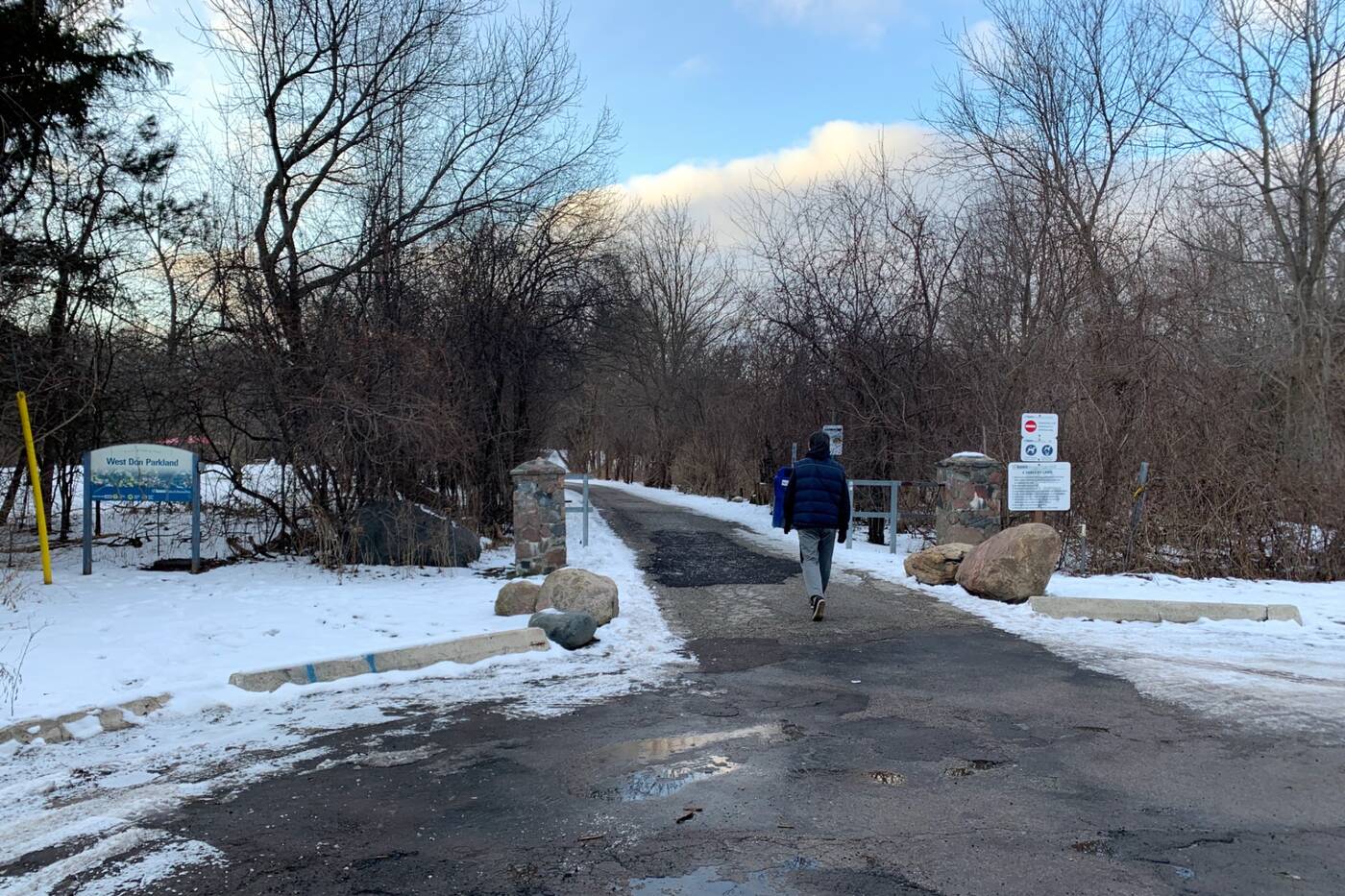 The paved pathway that leads from the parking lot at Bathurst Street connects with the West Don Trail.

But despite its close proximity to the well-known Earl Bales Park, this little gem of a trail is quite secluded and feels tucked away from the rest of the city as it's entirely surrounded by forest. 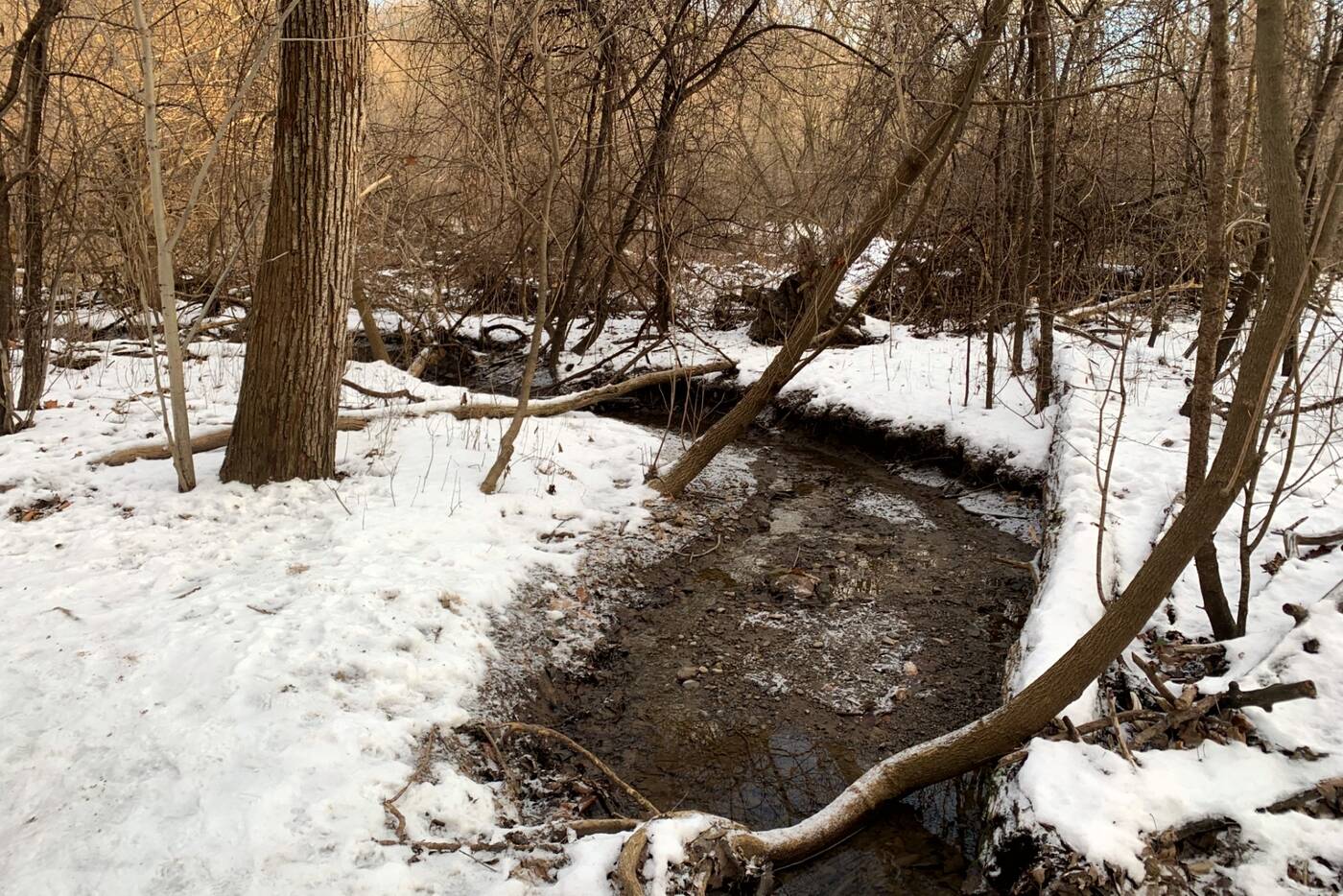 The trail through the Hinder Area follows a small creek in some sections.

If you're coming by TTC, you can take the 7 Bathurst bus from Bathurst subway station to the 4600 Bathurst stop and walk south to the park entrance on the east side of Bathurst Street.

For those driving, there's a large parking lot at the entrance off Bathurst right near the trailhead. 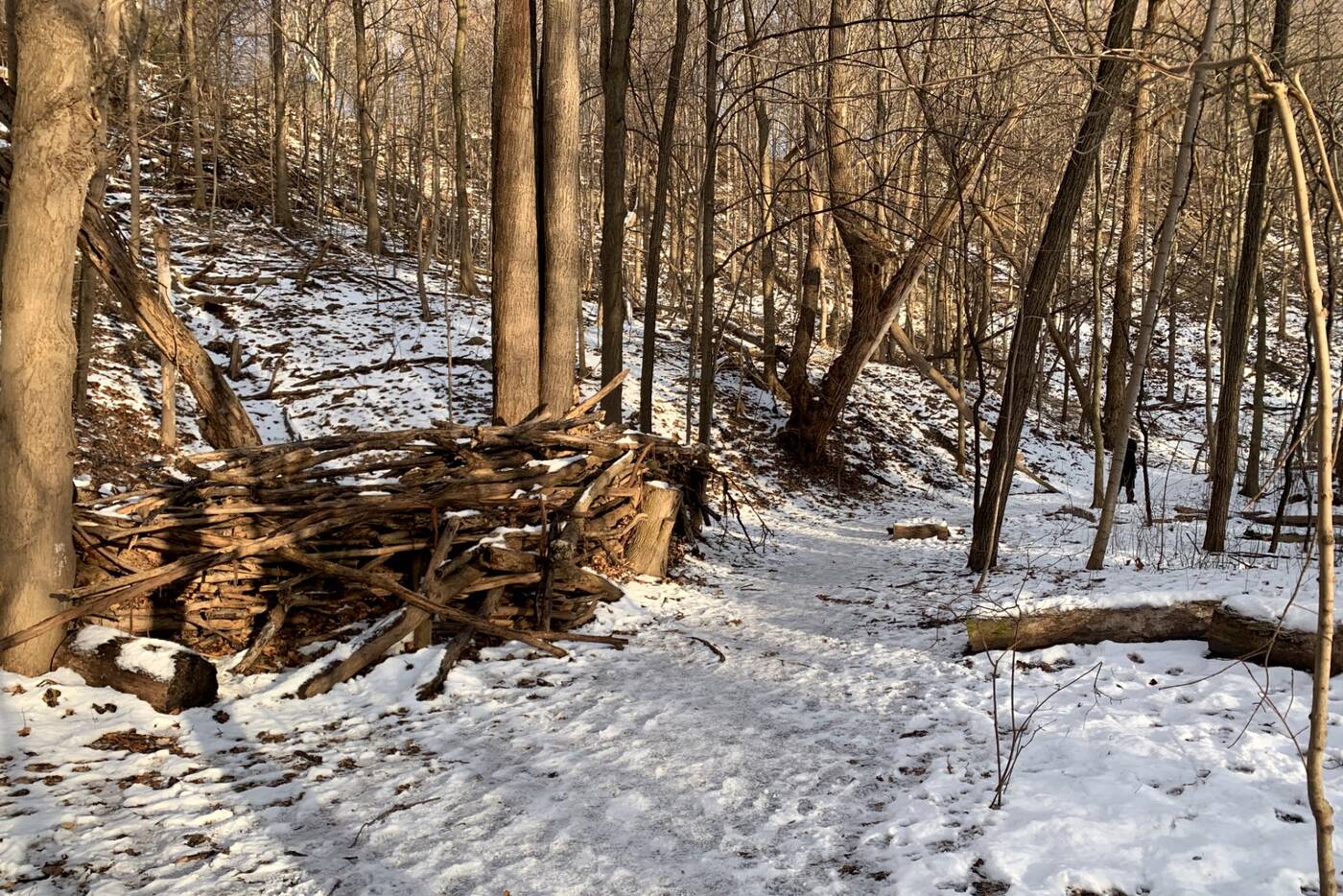 The natural area is covered in trees, both fallen and standing.

There's a paved pathway that you can take that runs fairly straight southward and through a residential street for a short time before connecting with Earl Bales Park Trail. 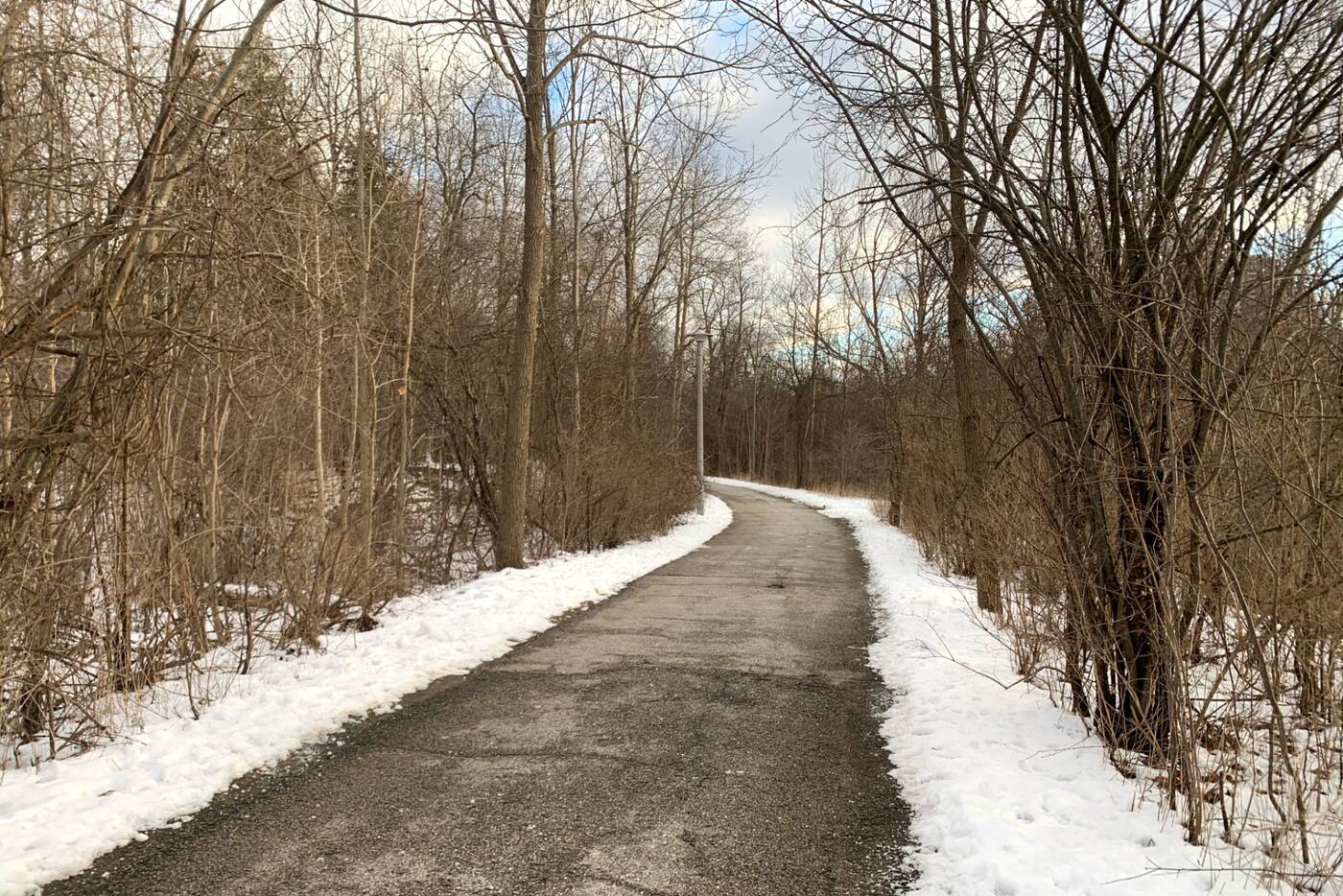 The paved trail makes for a better option for those with a wheelchair or stroller.

Alternatively, you can explore deeper in the forest by stepping on to the rustic trail system in the woods right next to the parking lot. 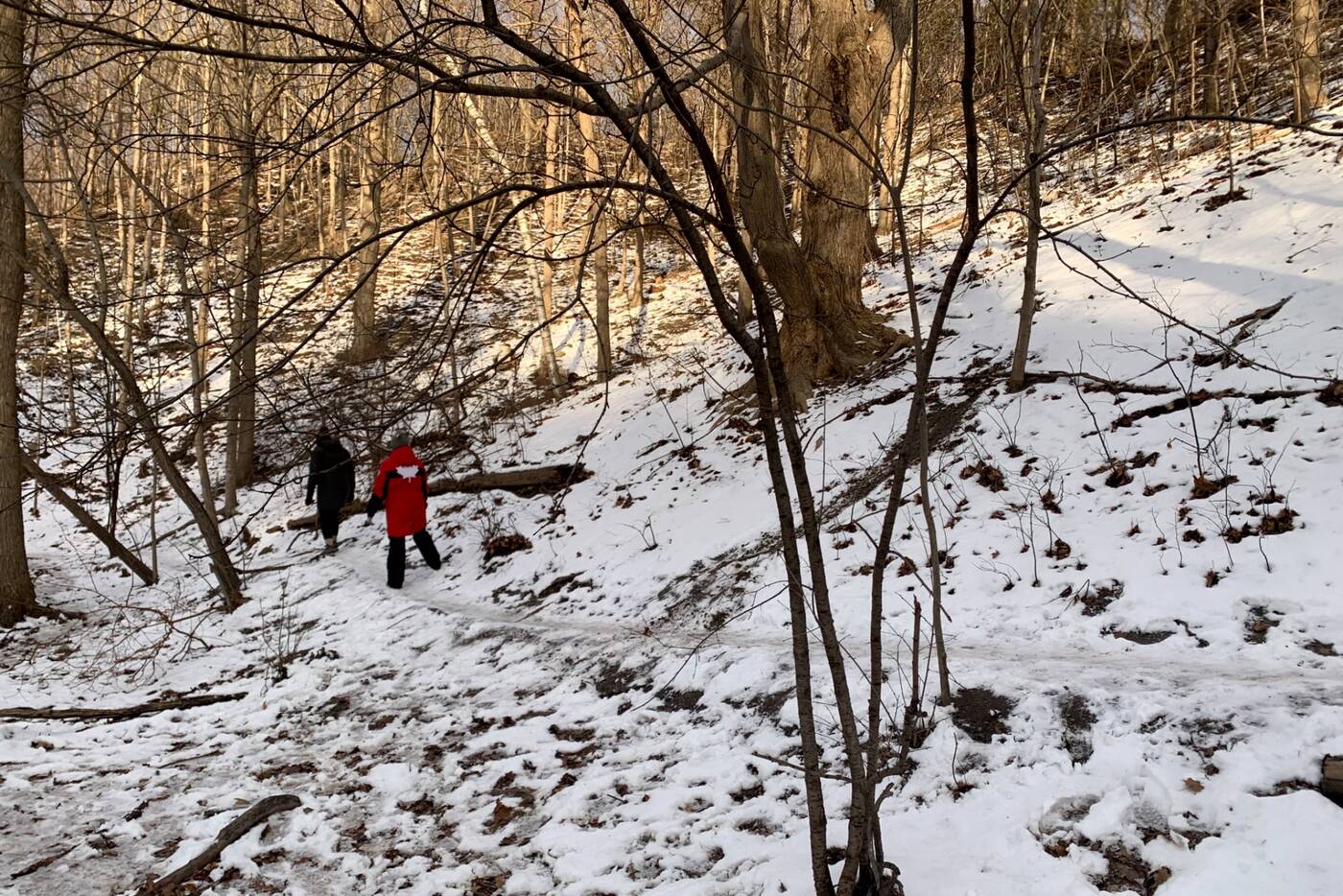 There are no official trail markers or signs through the forest and hikers tend to just walk on the safest route.

The varied dirt path will bring you through the Hinder Area, which is part of an extensive forested ravine system that helps support wildlife in the area. 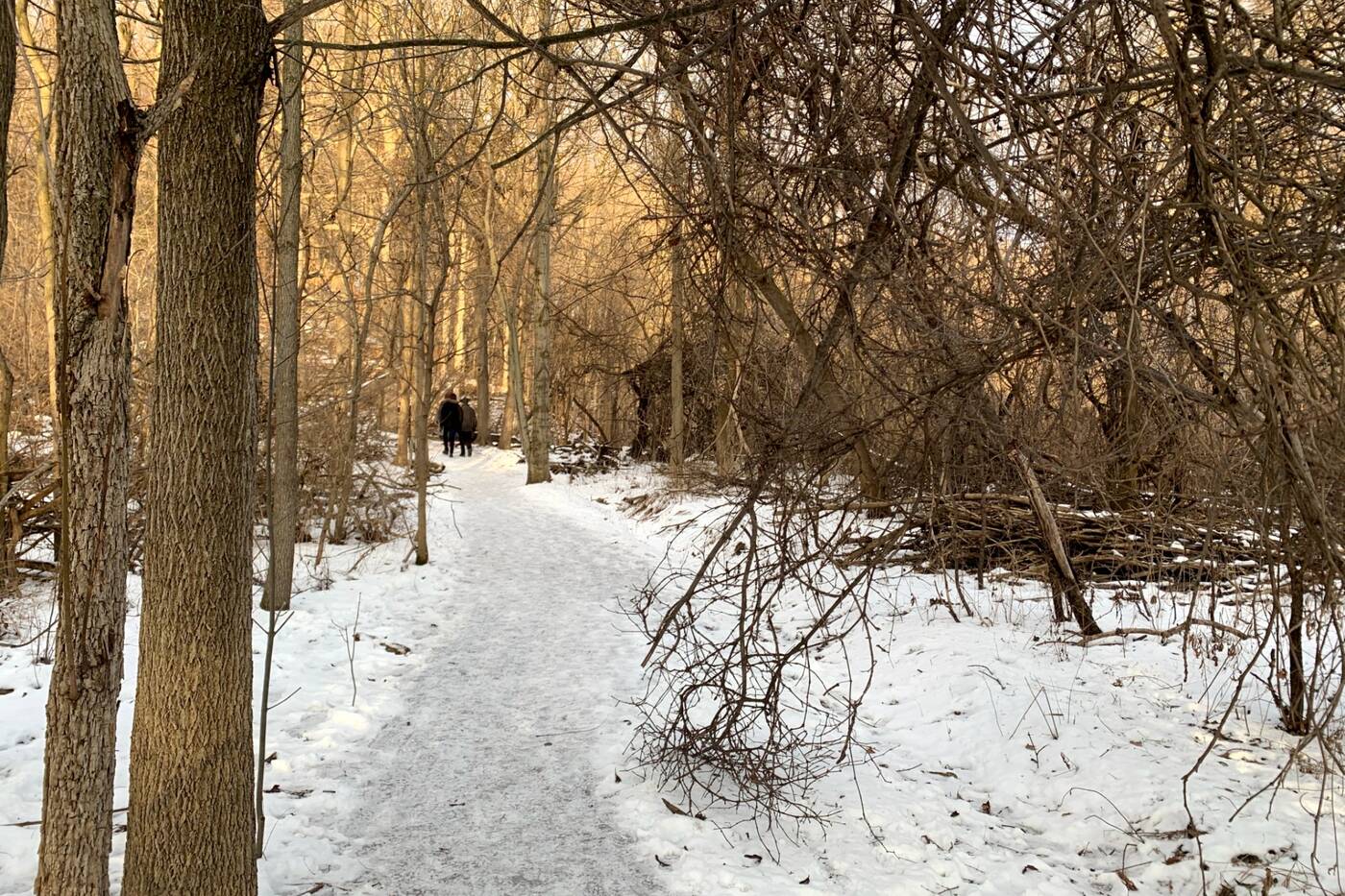 Boasting a vast amount of tree cover, the area is a popular spot for birdwatching in the city.

Although this route can be a bit slippery and treacherous in the winter months (there's no winter maintenance through this area), it's a great option for those who prefer to be entirely surrounded by the forest. 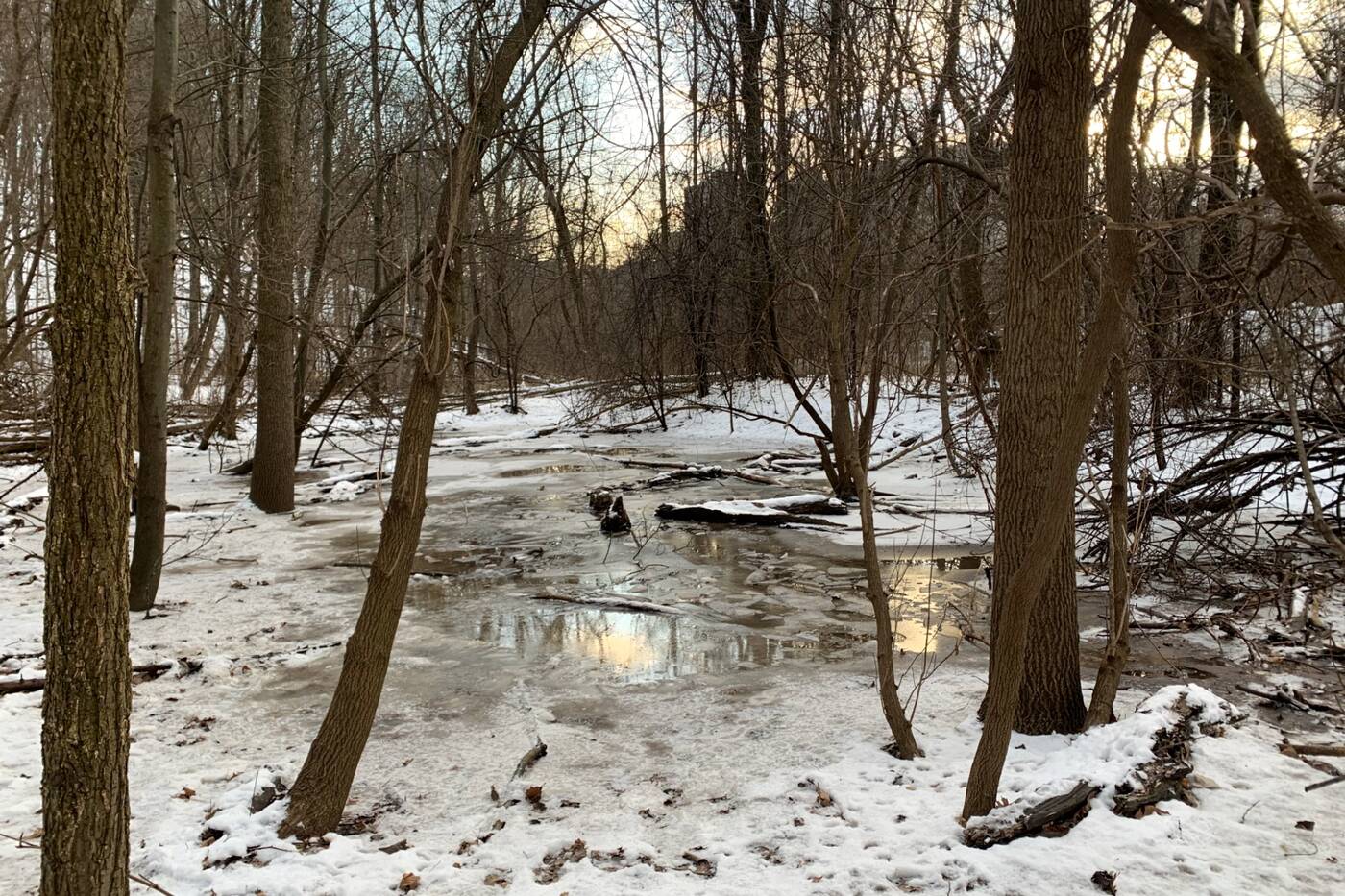 The creek will be frozen over in a lot of spots during this time of the year.

The forested area is covered in mature stands of Sugar Maple, Black Maple, American Beech, among many others, so you're in for quite a colour display if you visit in the fall. 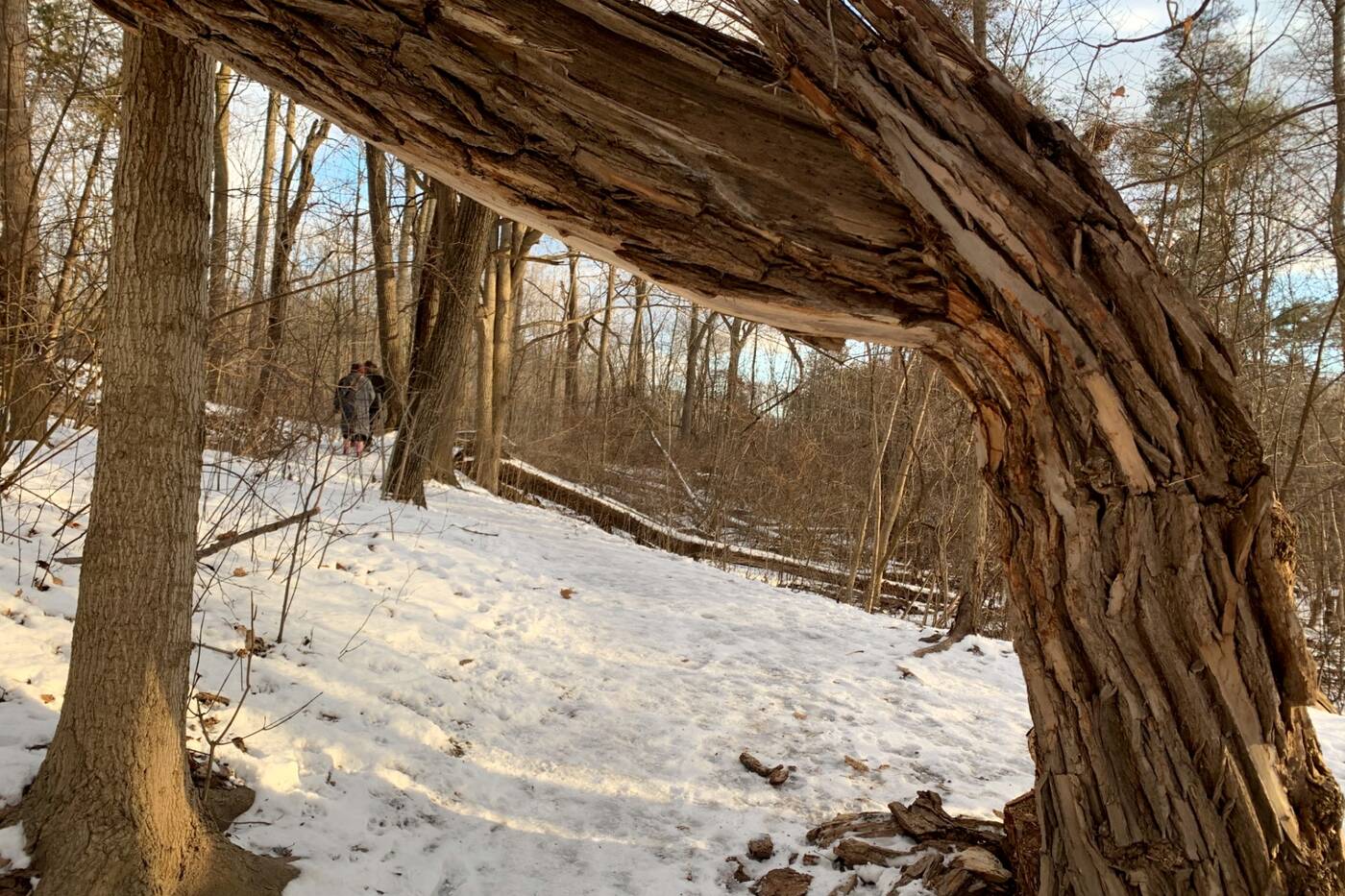 The walk through the forest is quiet and secluded, especially during the winter months.

There are also a few rustic wooden boardwalks laid down to help you traverse over the small creek that trickles by in some areas or to make for a smoother surface for bikers in the summertime. 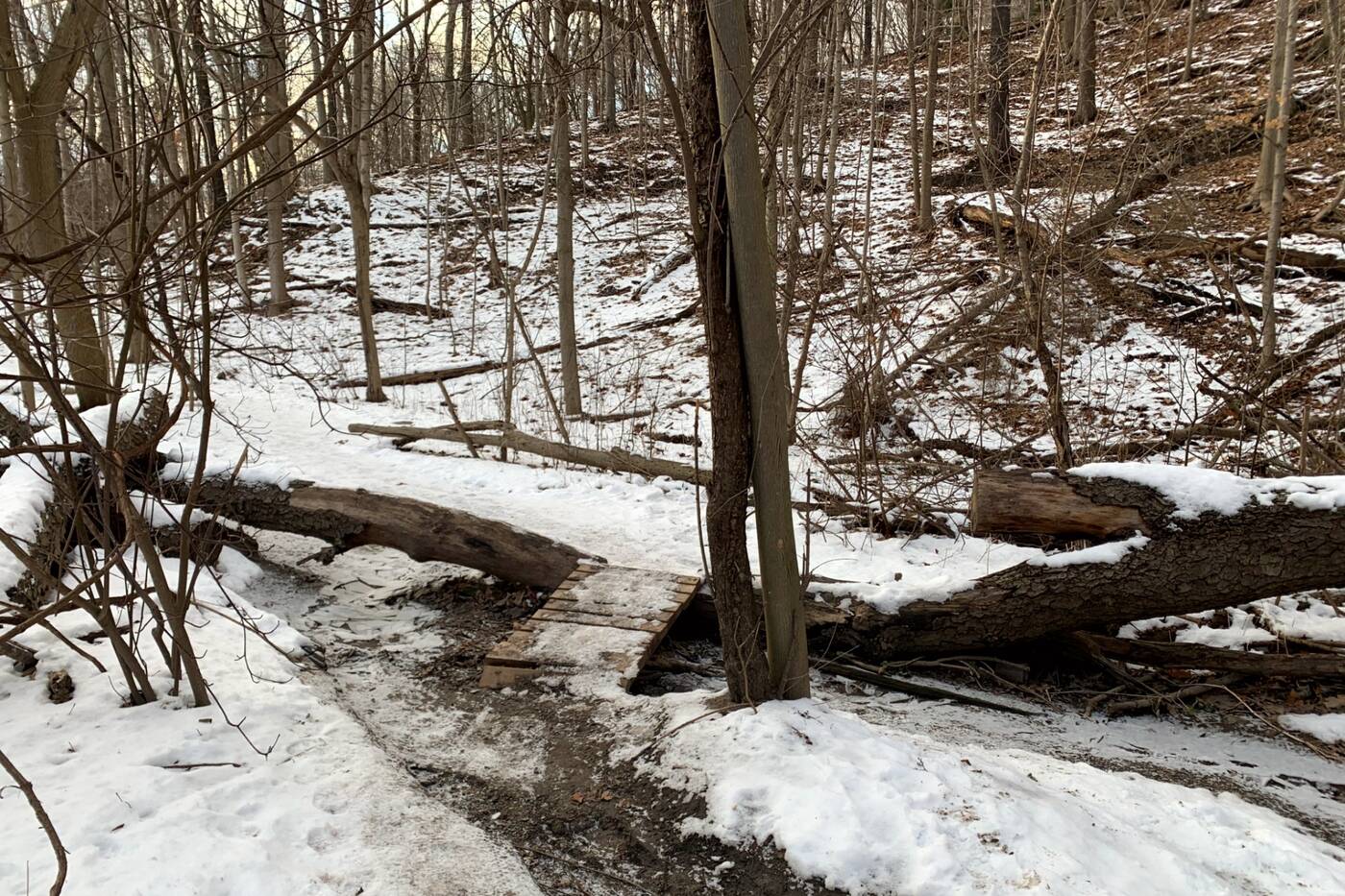 The natural area tends to be a well-used bike trail in the summer.

Eventually, you'll find yourself at Burnett Park located on the south end of Hinder Property where you'll converge with the paved pathway that leads from the parking lot. From here, you can make your way to Earl Bales to extend your hike. 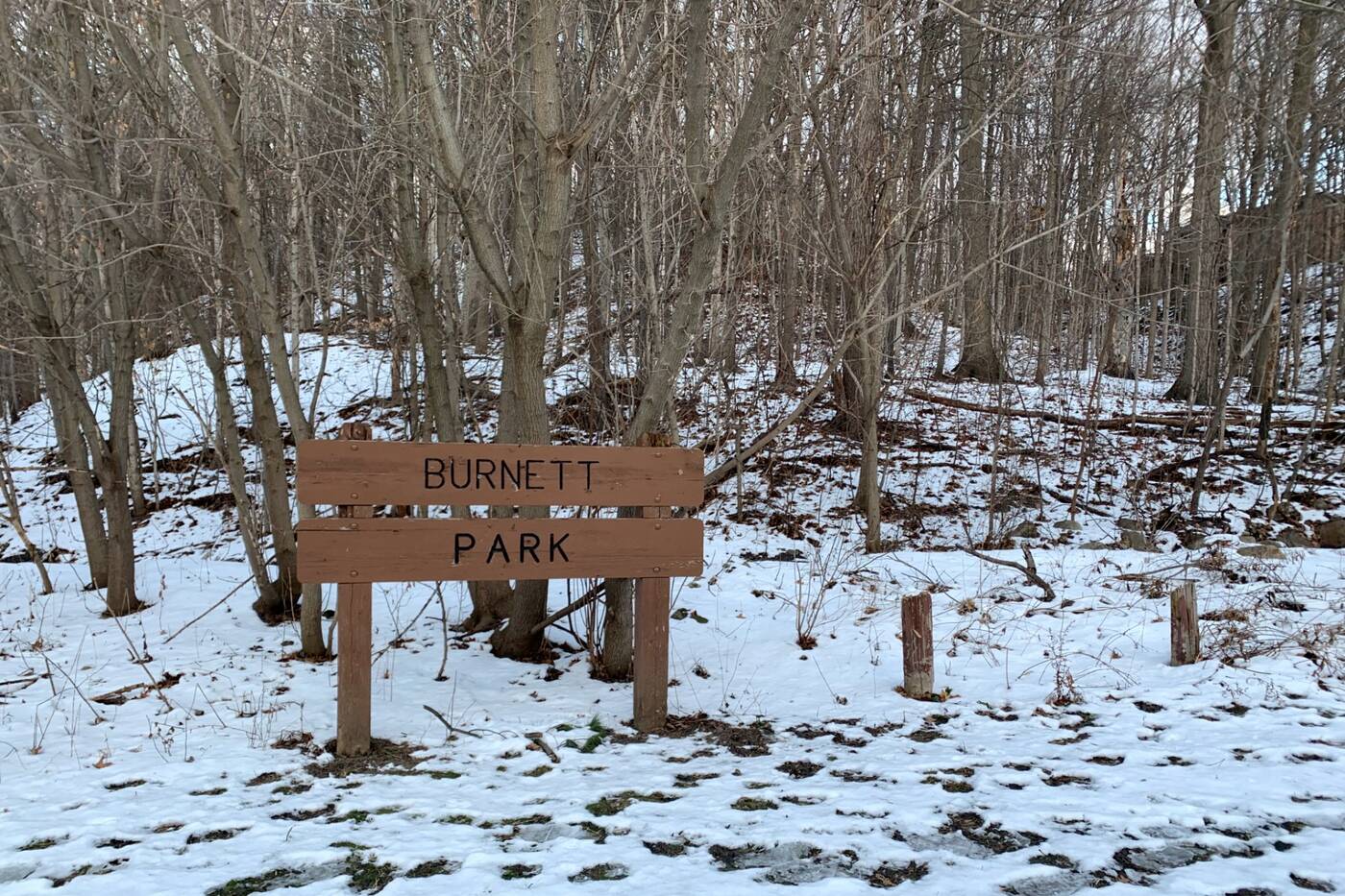