Small businesses across Toronto are protesting today in light of provincial lockdown restrictions that have forced them to close but allowed big box stores to remain open.

Organized by business improvement areas throughout the city, the protest is meant to draw attention to the continued struggles faced
by small businesses amid a second lockdown.

Business owners were encouraged to stand outside their establishment at exactly 12 p.m. with signs saying how long they've been open and how many people they employ.

Small business owners are holding signs saying how long they’ve been in business and how many people they employ in protest of the lockdown #Toronto #TorontoProtest #SmallBusiness #Lockdown #ThinkOutsideTheBigBox pic.twitter.com/md283fF7PA

"This Saturday would traditionally have been the busiest shopping day of the year," said Broadview Danforth BIA Chair Albert Stortchak.

"While the big box stores continue to operate through the pandemic, it's the small business owner that once again suffers by having to shutter in what would normally be their most profitable time of year."

Small, independent businesses have been hit disporportionately hard by the financial impacts of the pandemic, with far too many already out of business and shut down.

And when the province first announced that Toronto would be going into lockdown at the end of November and small stores would be forced to close for in-person shopping, many questioned why big box stores such as Walmart and Costco could remain open selling non-essential items while independent shops could not. 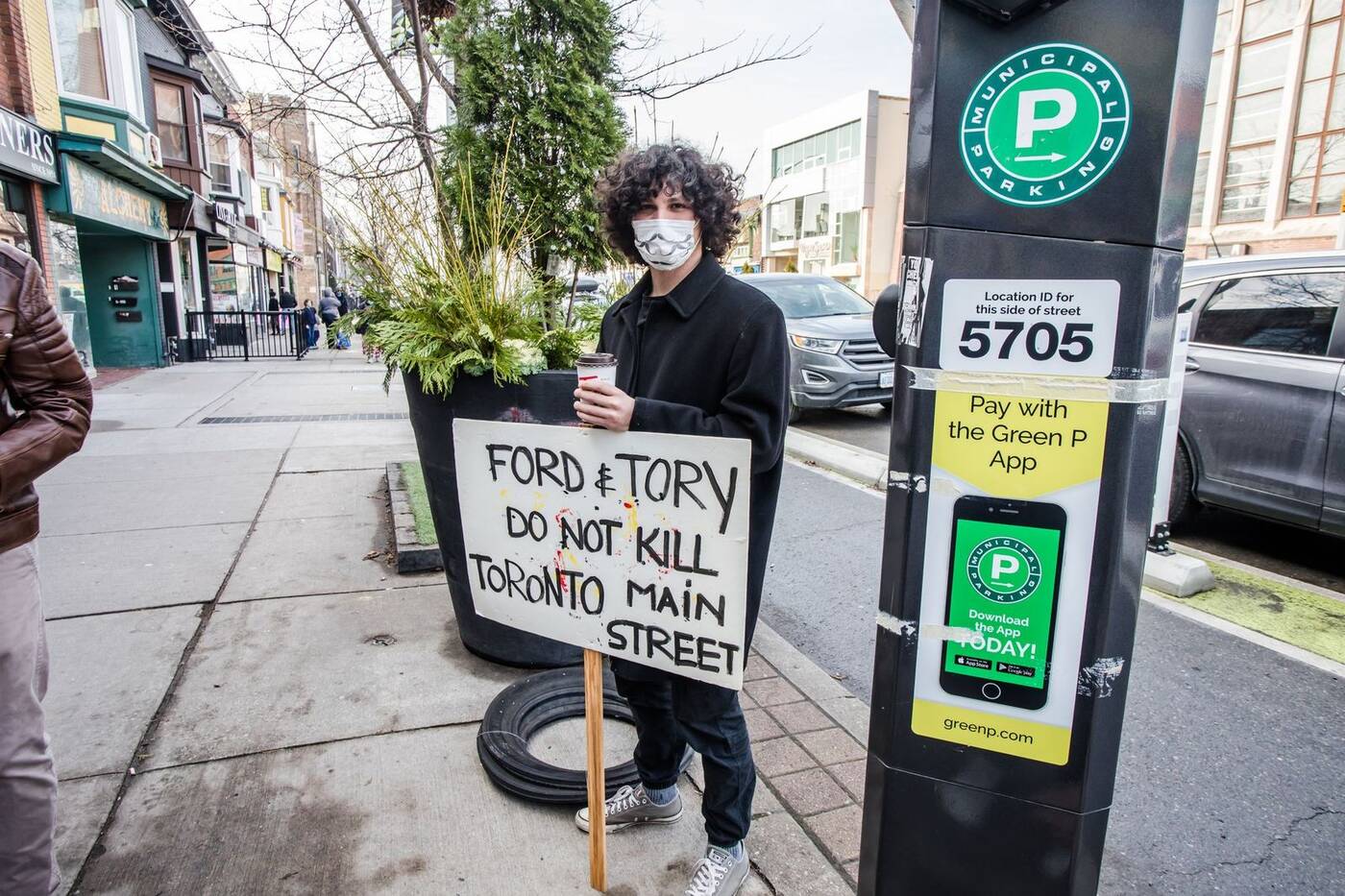 Premier Doug Ford has admitted that it's unfair, but he has also defended the fact that these large stores sell essential items like groceries, and it would simply be too complicated to force them to only sell items deemed essential.

As a result, small business owners are struggling more than ever, and many are protesting today in hopes that the government will change the rules and allow them to open with strict safety rules in place. 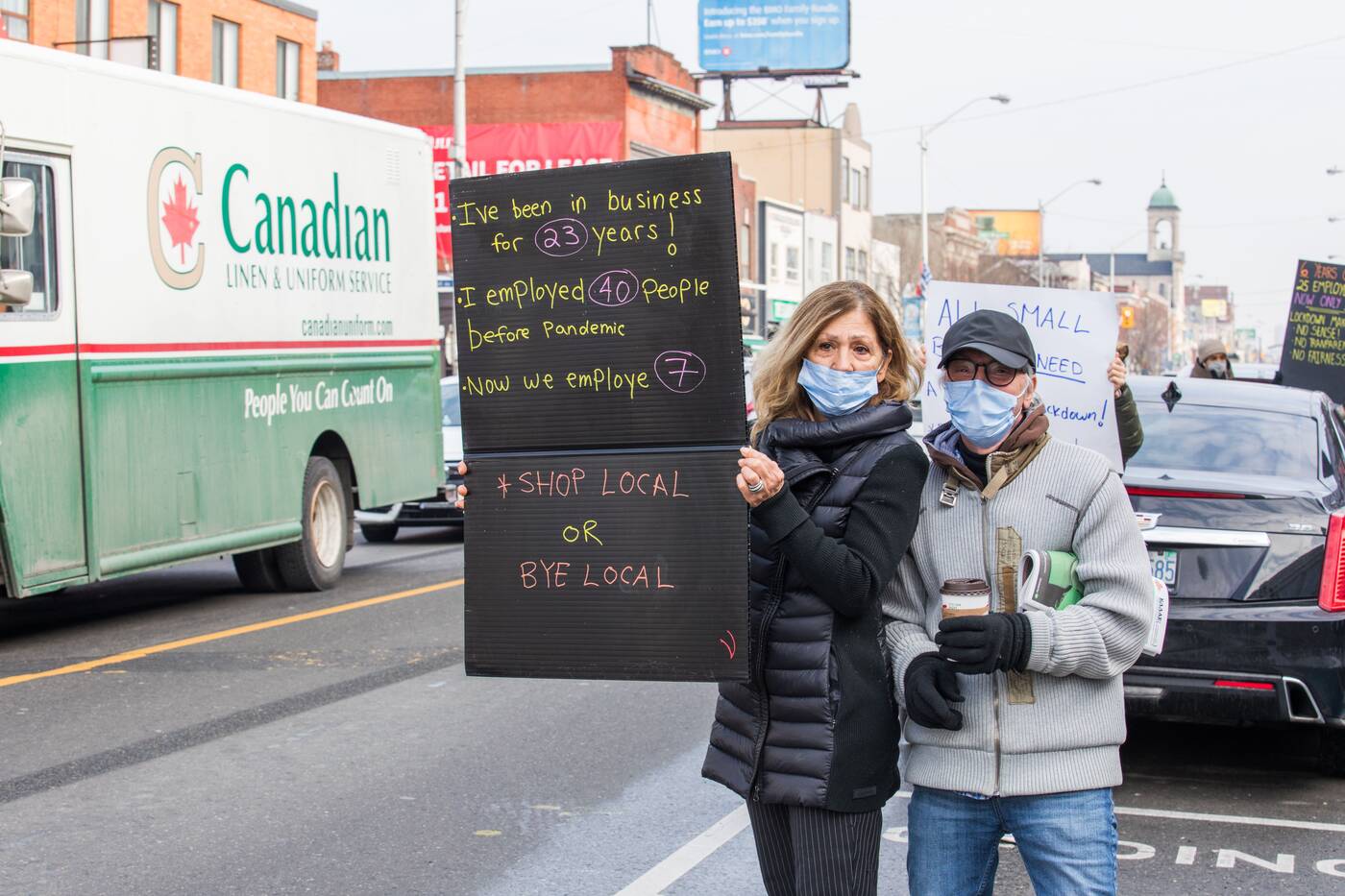 "I think they should allow us to open like they do the big box stores," owner of Reina Women's Fashion, Marta Montoya, told blogTO while participating in the protest, adding that allowing just one or two customers in the store at a time would be better than nothing.

"We can control how many people come into our store. It's small enough that we can keep it safe." 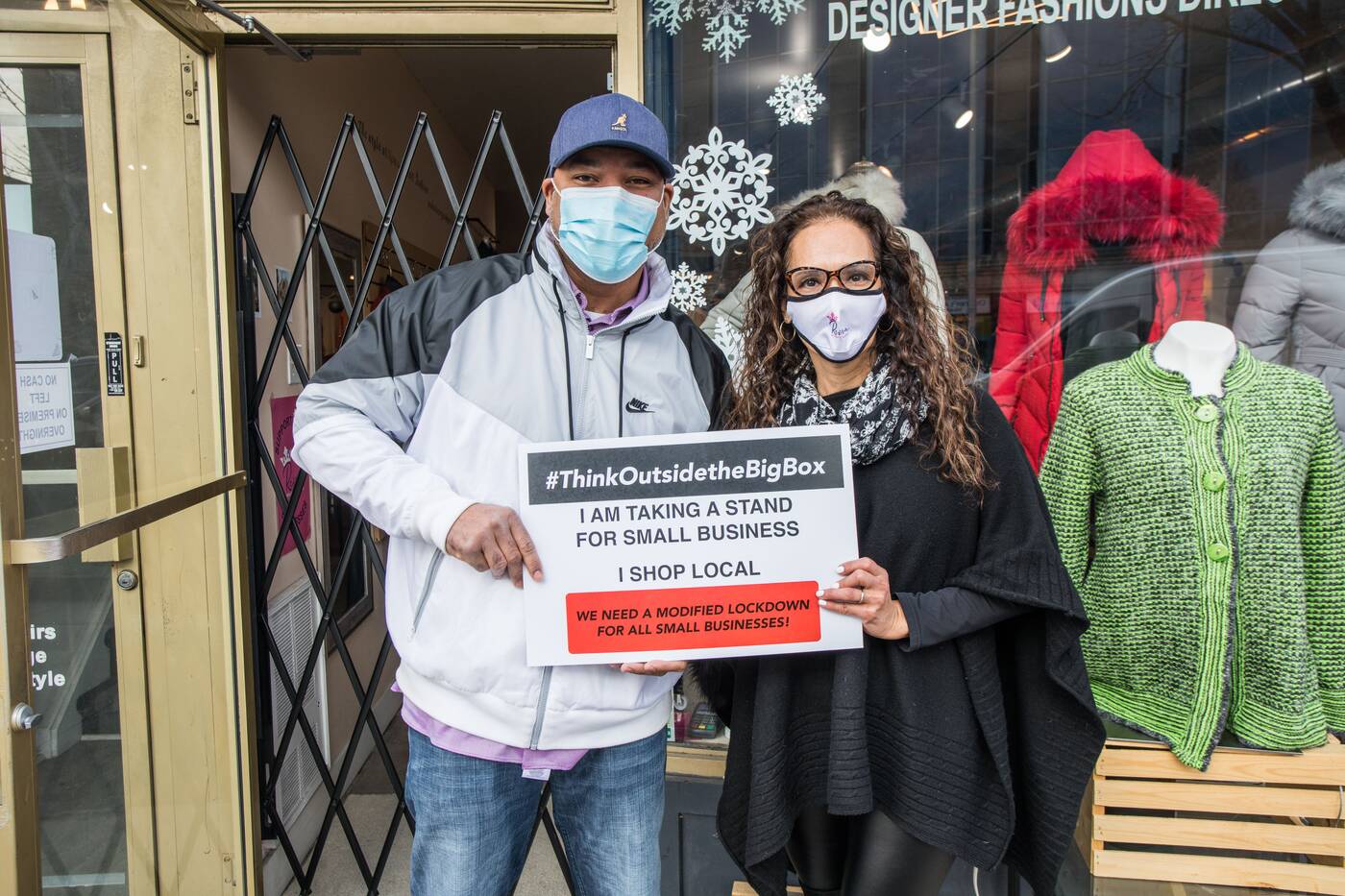 BIAs and business owners are also spreading the word on social media with the hashtag #ThinkOutsideTheBigBox, and they're encouraging everyone to shop local this holiday season.

This afternoon I'm with @BroadviewDanBIA out on the Danforth in support of small business. They are struggling and need our support more than ever. Please #ThinkOutsideTheBigBox and shop local. pic.twitter.com/wbouYVMsxA

"We hope that the government will consider modifying the current restrictions to allow these businesses to operate under an 'Appointment Shopping' model," said Stortchak.

"This would allow one or two customers on the premises at a time, with ample time to properly disinfect between appointments. We're asking the government to think outside the box on this."