Toronto's troublemaking raccoons are generally thought of as the unofficial masked mascots of the city, but true locals know of another, more elusive animal that also serves to represent the 6ix: the white squirrel.

Predominantly seen in Trinity-Bellwoods Park, the little genetic anomalies have been the subject of art installations, the inspiration for costumes, the namesake of a business and a laneway in the area, and more.

And, as such, the city is understandably devastated when one of the rare resident creatures passes away — something that unfortunately just happened again this week.

A citizen shared the heartbreaking news in a Bellwoods community Facebook group on Sunday, informing members that they had sadly happened upon the lifeless body of one of the few white squirrels in the neighbourhood, who appeared to have fallen to their death from a nearby tree.

"My amazing neighbour Michelle and I had a moment with the little one, and then I took the Squirrel over to Trinity-Bellwoods Park to their park personnel, who were also genuinely saddened by this. Goes to show how much the little one meant to our neighbourhood," the poster wrote.

"I couldn't bury it, as it had fallen from a tree — which is very odd for squirrels, and might indicate that it was sick from something." 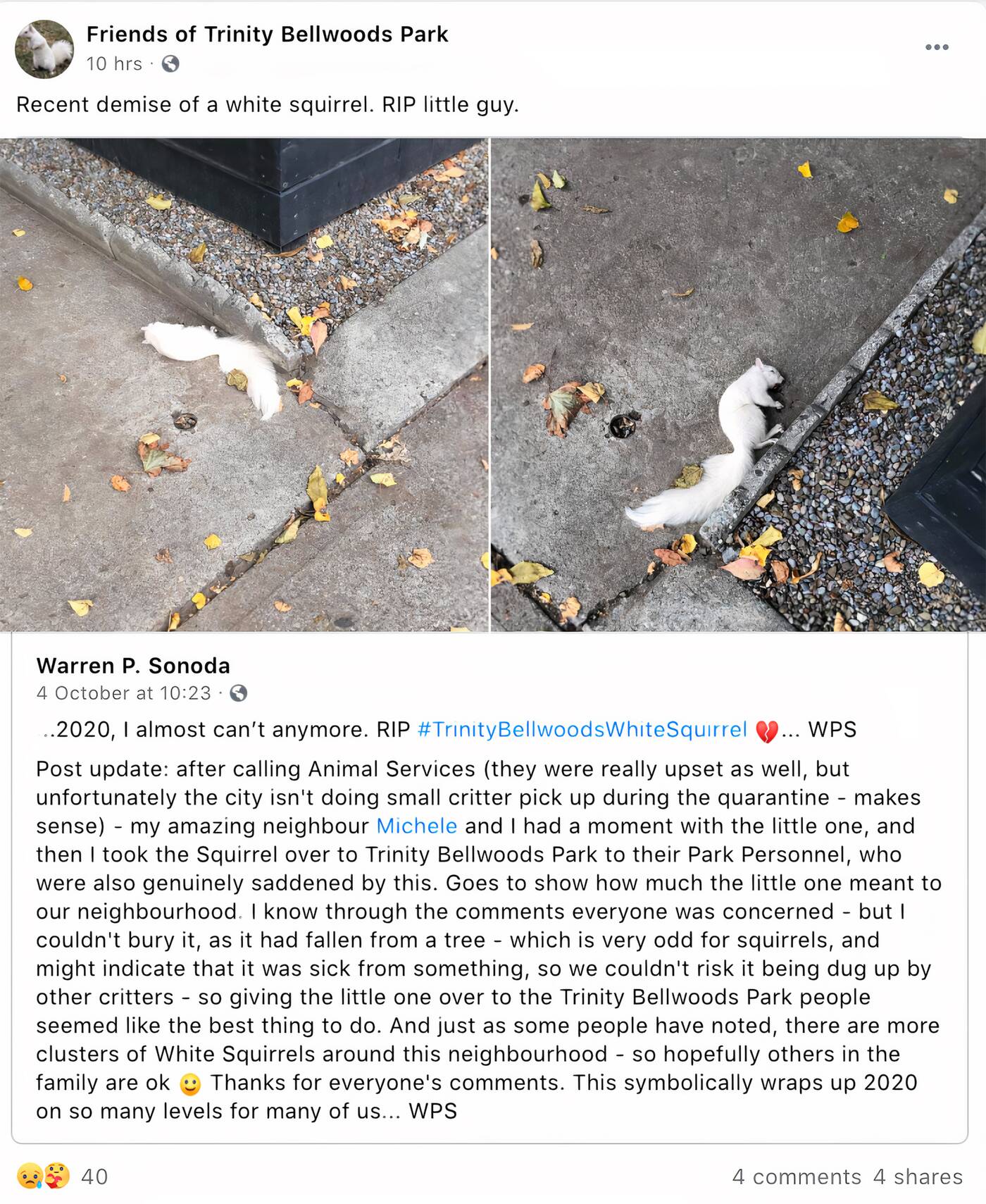 The ethereal critters are not a species of their own, but are actually just eastern grey squirrels with gene mutations that lead to full or partial albinism, which unfortunately also gives them poor eyesight and makes them more prone to things like missing an easy jump to a nearby branch.

Though the legend of the white squirrel may lead some to believe that there is only one, thankfully there are a few of the little pals roaming around various parks in the city, though their exact number is unknown.

They are thought to manage to thrive better in the downtown core than in the wild due to their lack of natural predators despite being tragically awful at camouflaging — a trait that makes them easy to spot for humans that are often understandably excited by a lucky sighting.

Though the city is sorrowfully down one of the famed furry friends, at least there is the hope that the rest of the population is still doing okay.

The incident is just one more in the long line of "wtf" happenings of this year, as the original poster noted when they aptly stated: "This symbolically wraps up 2020 on so many levels for many of us."