The top 25 coworking and shared office space in downtown Toronto

Coworking and shared office space in downtown Toronto isn't as hard to find as it used to be. These days, there's plenty of options when it comes to stylish work environments in the Financial District, South Core, Entertainment District, King West and other downtown areas.

Here are the options you're going to want to consider when it comes to coworking and shared office space in downtown Toronto.

IQs four downtown locations are mostly within a few blocks of one another, all around the Financial District and King West. They have meeting rooms and lounge areas galore and their two-floor 150 King West location even comes with two huge outdoor patios.

This controversial global brand that helped make shared office space cool has multiple locations scattered all around downtown. Their Hudson Bay location might be the nicest of the bunch and is right across from the Toronto Eaton Centre.

The name says it all: this chain has locations scattered across the city, including a multi-storey space with a rooftop patio near Queen and John that also comes with its own Thor Espresso Bar.

Who would have thought that Kensington Market could squeeze in a coworking space? This studio dedicated desks that can be rented month-to-month or in clusters, for teams, in their shared office on Augusta. 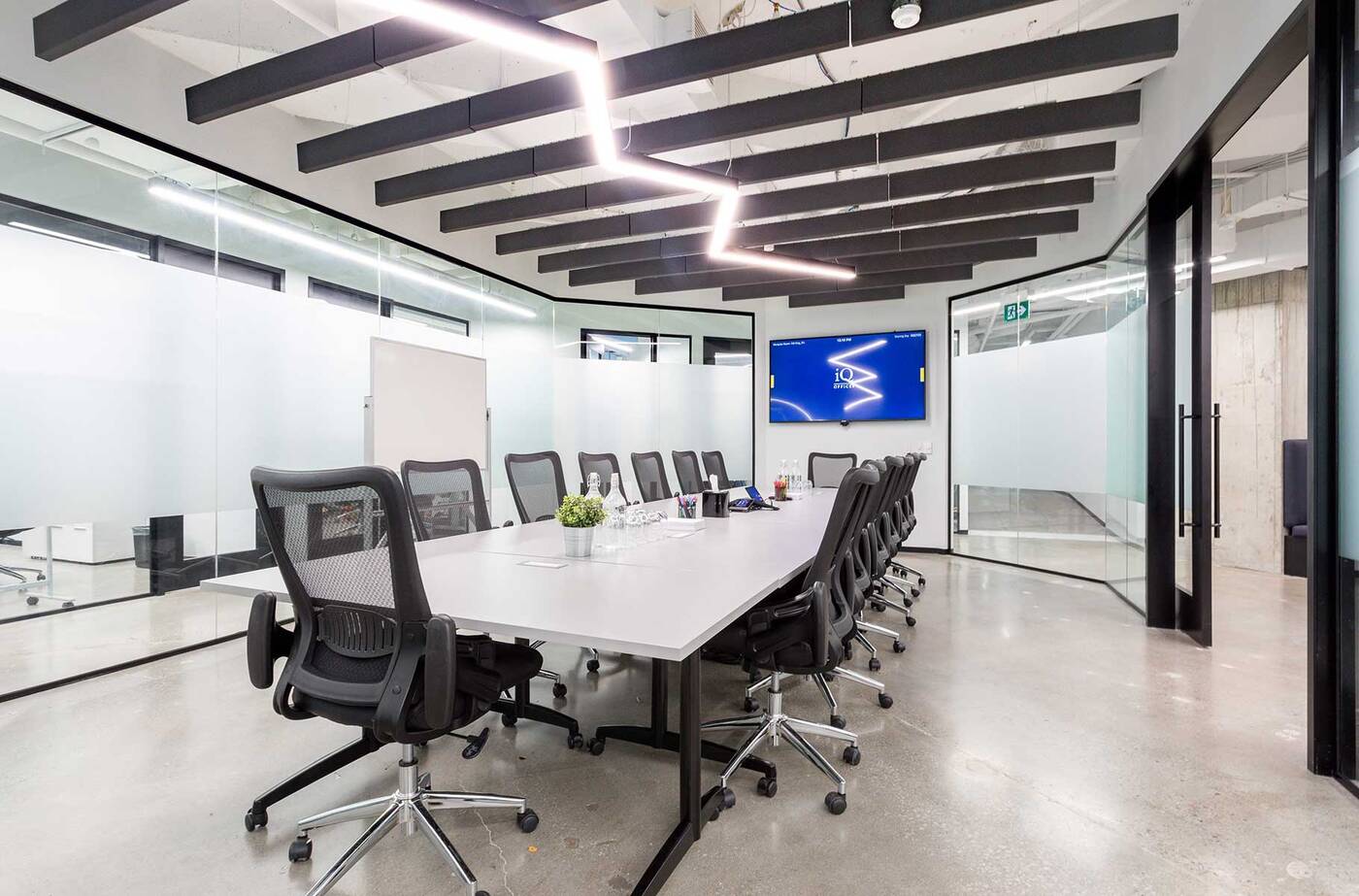 IQ Offices has multiple locations in downtown Toronto including this one at 150 King St. West. Photo via IQ Office Suites.

You'll find both floors of TPC situated inside 120 Adelaide West in the Financial District, meaning there's direct access to Toronto's precious PATH system. Offices come in varying shapes and sizes but try to get the ones with the majestic views of Nathan Phillips Square.

Sitting on the 19th floor of a building directly across from Nathan Philips Square is this sleek and simple workspace that also offers incredible views of City Hall from their Design Space room.

There's multiple locations of this Canadian coworking brand across downtown, including some fancy locations like their Sky Parlour at 1 Adelaide Street and inside the historic Confederation Life Building at the corner of Yonge and Richmond. 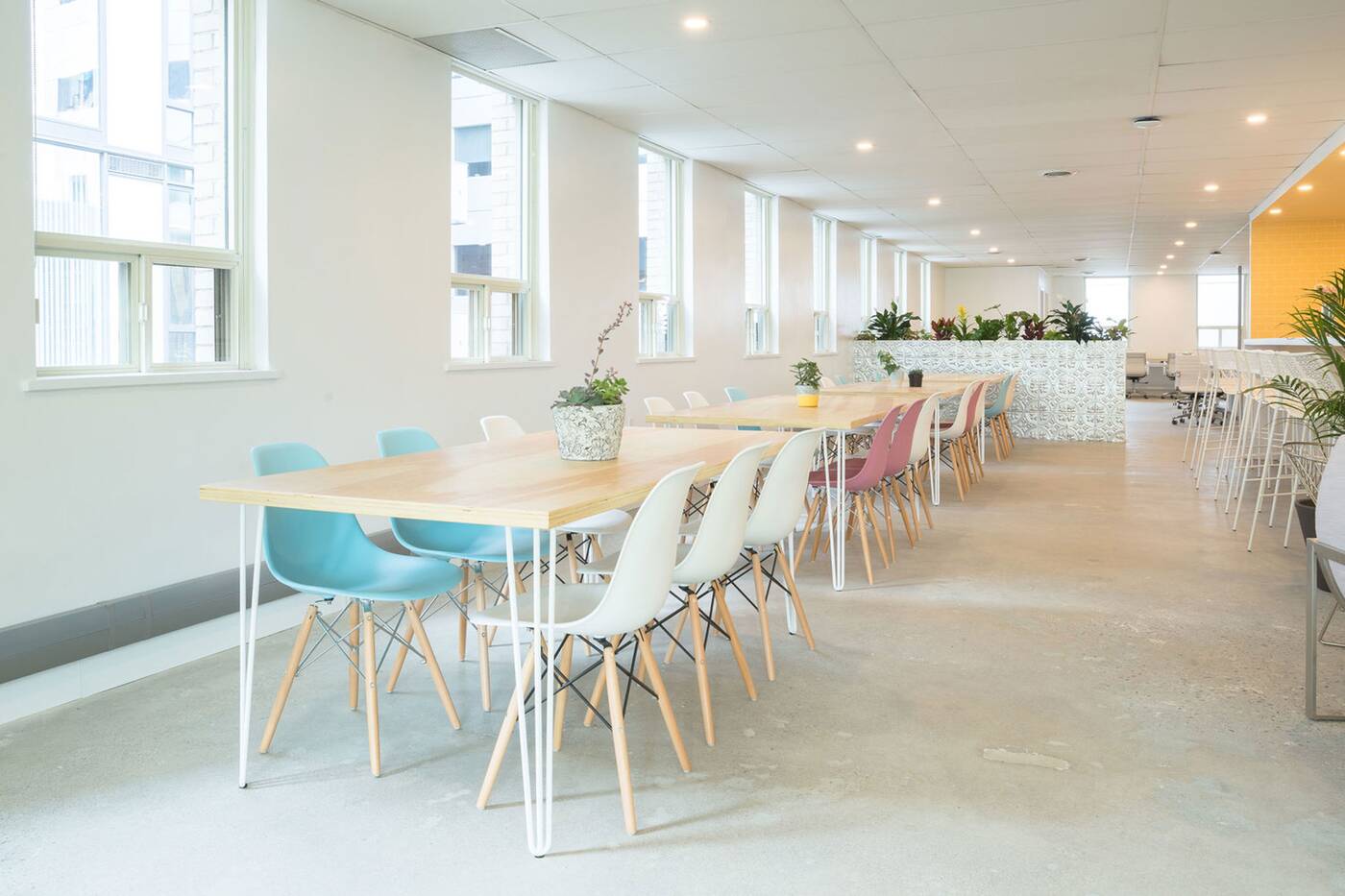 Make Lemonade is at Adelaide and Peter is exclusively for women-identifying members. Photo via Make Lemonade.

There's a No Asshole policy in this space designed specifically for those working in law and legal services. The biggest draw will definitely be working inside the Trader's Bank Building, one of the few remaining skyscrapers in Toronto built in 1906.

Located in the further reaches of downtown is this artists' hub on Queens Quay East. Toronto non-profit Artscape provides some pretty phenomenal features for members, including 3D fabric printers and recording studios.

Created first and foremost for musicians and sound professionals, this two-floor space near Jarvis and Adelaide comes decked out with editing suites, SSL recording studios, and communal work spaces. The fact you might bump into an eOne artist is also a big plus.

It's definitely equal parts work and play at this King West space. It took over the 7,500-square-foot property that used to house The Hoxton, so no surprise parties at night are as common here as laptops during the day. 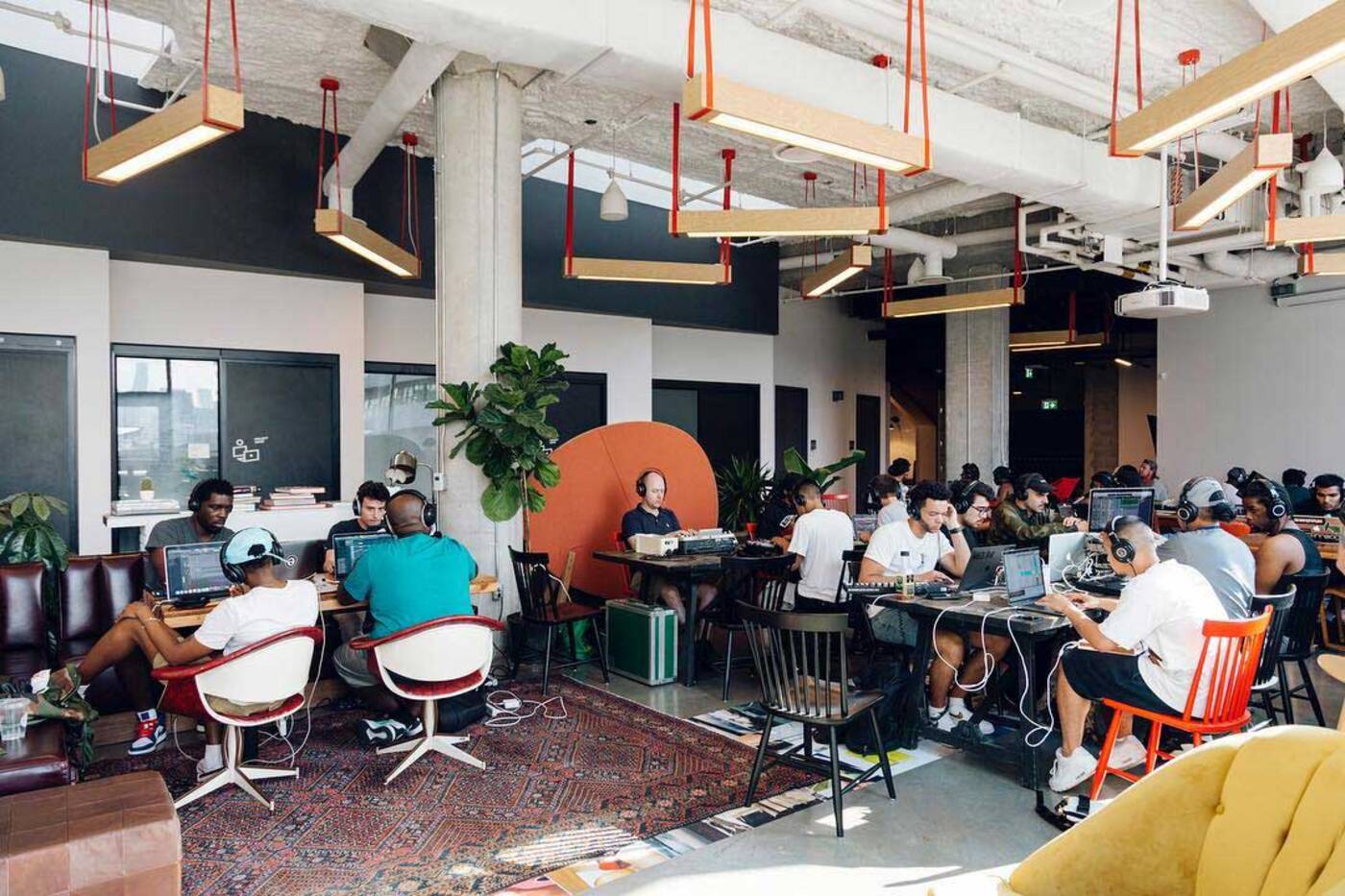 Artscape Daniels Launchpad near Sugar Beach is a hub for creative types. Photo via Artscape.

Aptly named after the 48th floor it occupies in One King West in the Financial District, this shared office space comes with a luxurious board room with sweeping vistas of the city.

A simple hot desk here starts at $295 per month, but if you can swallow the cost, you can pick from your choice of their four-floor location by St. Lawrence Market, or the one with a ground floor cafe and shower suites by Spadina and Adelaide.

If free espressos and craft beer sound appealing, a membership at one of multiple locations of Workplace might be a good move. There's pretty much a location next to all the most popular downtown neighbourhoods, from the Entertainment District to Queen West.

Opt for the loft-style location at King and Bathurst (which has a photo studio) of this coworking brand, or go for their Camden Street space, which spans 8,000 square feet and has its own outdoor patio. 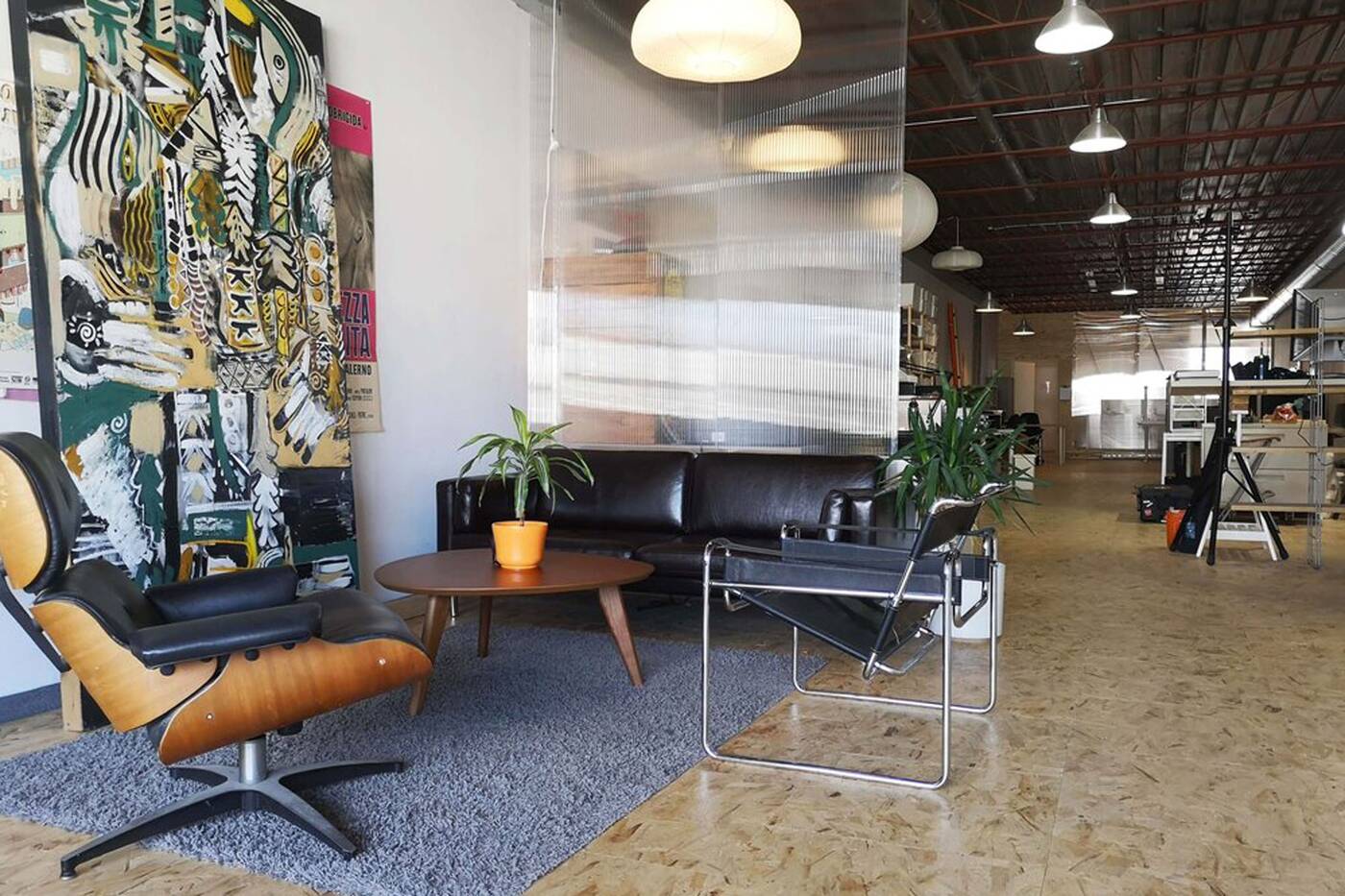 One of the first coworking concepts to ever hit the city is CSI, which has a downtown location in Chinatown. The post and beam space houses some of the more green-minded, activist-type startups and entrepreneurs in the city.

There's no membership needed to get access to this sunny coworking space at Adelaide and Peter where women make up 100% of the members. There's drop-in day passes, vibrant meeting rooms, private phone booths and unlimited lemonade.

Head to the classic brick-and-beam digs of 401 Richmond Building for this coworking spot. Biggest perks here is access to all of 401's highlights like their rooftop patio and a trip to all the galleries in the building when inspiration runs short.

Weekly open bars and speaker series are just some of the offerings at Startwell, which actually has its own campus comprised of event spaces, a podcast studio, an event venue, and offices spread along King  West by Tecumseth. 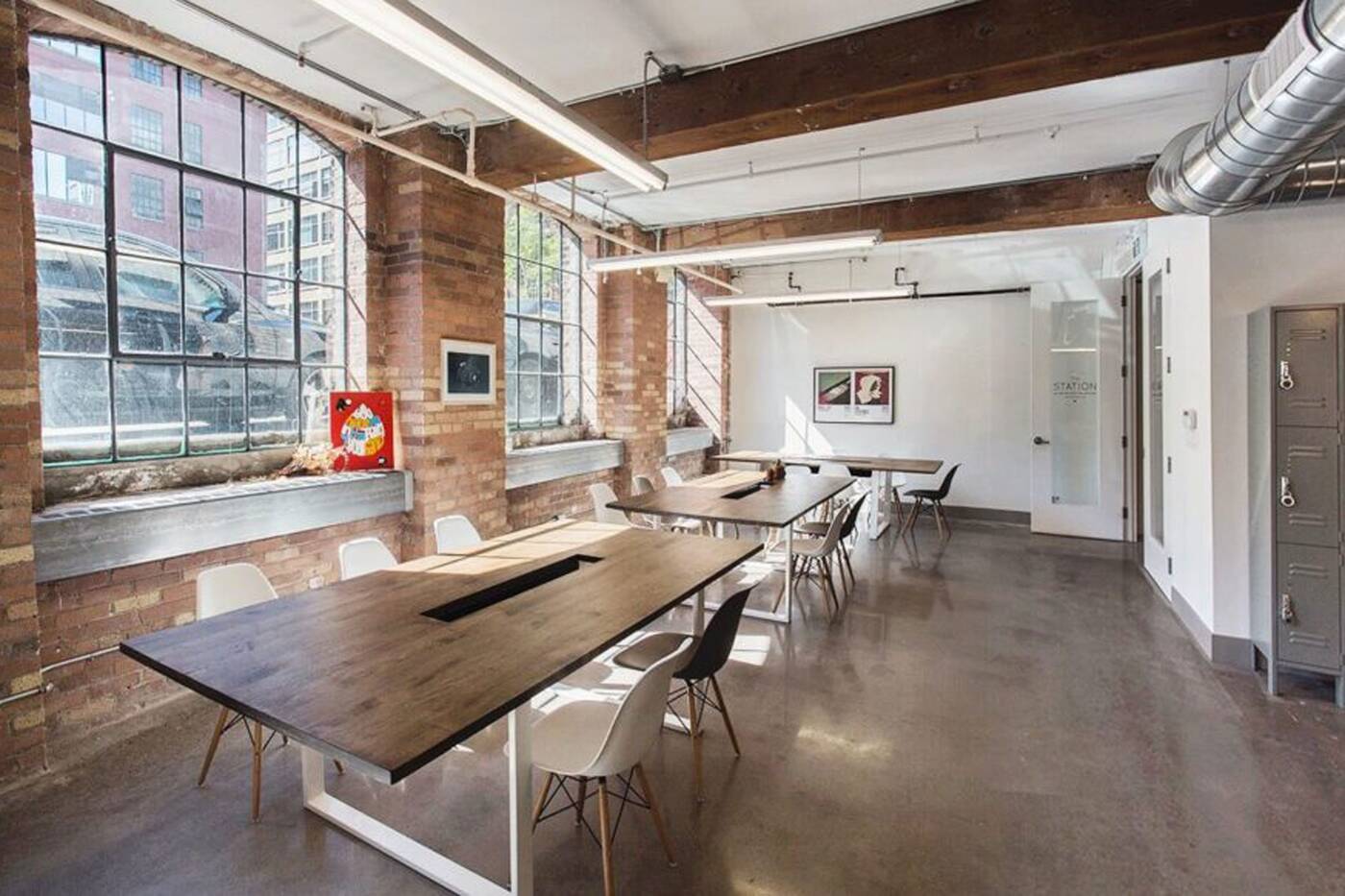 What used to be the Acme Textiles building dating back to 1922 is now a 10,000-square-foot workplace with beer Fridays, ping pong, summertime BBQs on the rooftop, and of course, the ultimate de-stresser, dog-friendly digs.

This community of developers offers an office space where programmers can spend their day coding alone or collaborate, mentor, and trade code knowledge. They also hold events in their two-storey building at King and Bathurst.

This workplace is meant for people working in gaming and interactive digital media, from individual developers to small teams. They're a member of Toronto Media Arts Centre, meaning you'll get to use a 500-square-foot gallery space for installations and exhibits for free.

This traditional provider of shared office space may not be the place for creative types but they certainly aren't short of supply with more than 20 downtown coworking locations and even more across the GTA.

It's not really a coworking space like the others on this list, but if you're the kind of team that moves around, this unique concept offers a Flexday Super Pass which grants you access to some pretty unique places across the city, which range from restaurants like Marben, off-hours, to spots like Snakes & Lattes.