With 96 murders on record to date, Toronto is closing out 2018 as one of its most violent years in modern history. The previous record for the most homicides in a single year, 89, was set in 1991.

Are the numbers alarming? Sure, but Toronto Police Chief Marc Saunders maintains that they shouldn't be viewed as evidence of an "upward trend."

It's simply been a rough 12 months for the city, he says—one that won't likely repeat itself any time soon.

"This is a year like no other year," said Saunders during a year-end news conference at Police Headquarters on Thursday morning. "This was a unique year. I'm certainly not looking for another year like that in the foreseeable future." 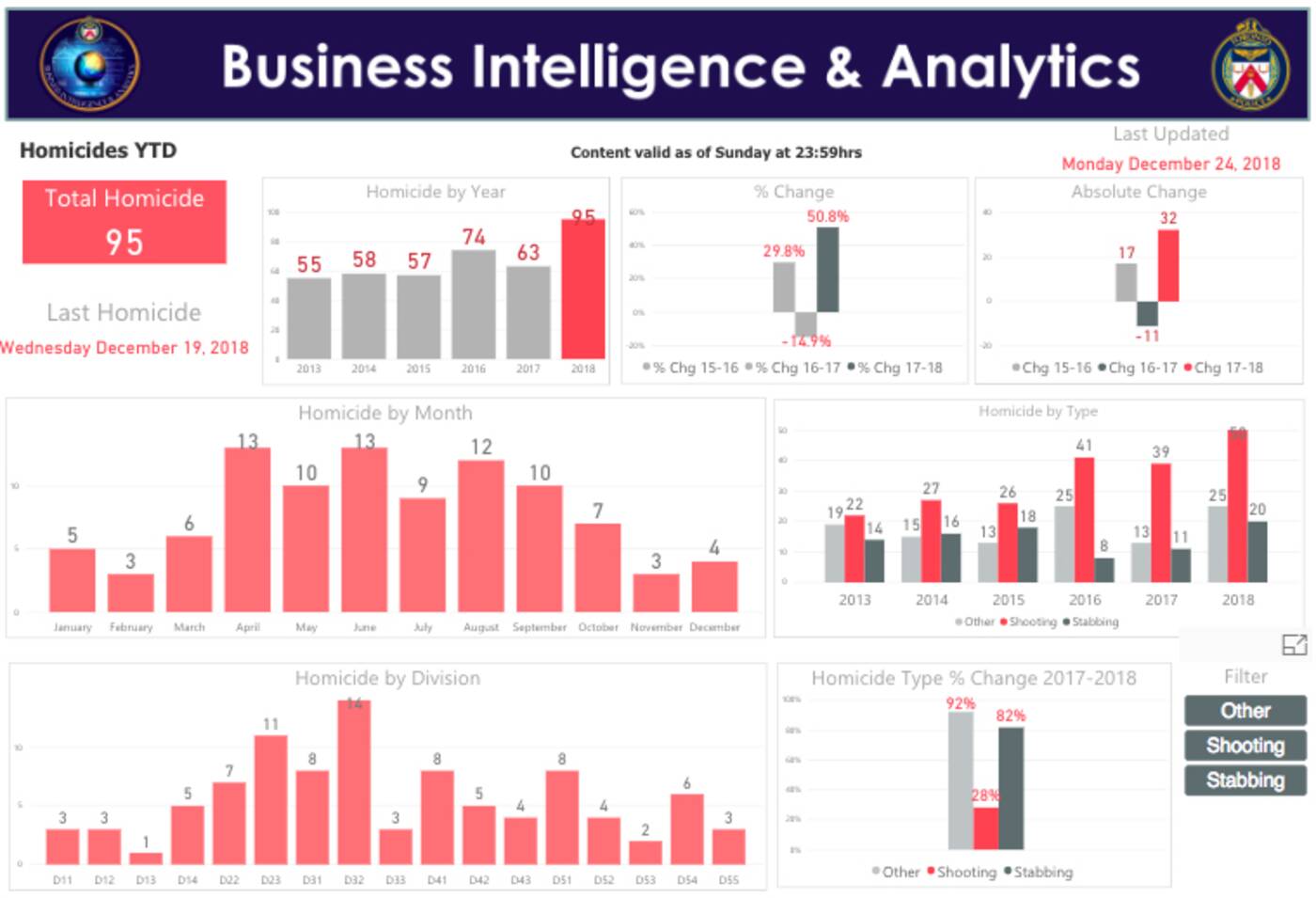 The Toronto Police Service Public Safety Data Portal showed a record 95 homicides for 2018 as of Sunday, when it was last updated. Image via TPS.

At least half of this year's homicides (51) can be attributed to gun violence, according to police, who've been working furiously since this summer to curb a recent surge in local shootings.

Another 20 deaths were related to stabbing incidents, while 25 more were categorized as "other."

It's this last category, up 92 per cent last year in terms of its proportion against other types of homicide, that Saunders says pushed Toronto well past its previously-recorded numbers.

The Chief pointed to two mass casualty events as evidence of how unique and "incredibly busy" 2018 has been: The high-profile North York van attack in April and the Danforth shooting in July.

Ten victims were killed on April 23 when a rental van plowed through crowds of pedestrians on Yonge Street near Finch Avenue. Two more people lost their lives after a gunman opened fire in Toronto's bustling Greektown neighbourhood on July 22.

Saunders also spoke during his press conference about additional challenges faced by the police department this year, such as the case of alleged Toronto serial killer Bruce McArthur.

McArthur so far has been charged with eight counts of first-degree murder in connection with bodies found buried in planters and elsewhere near where he had been conducting business as a landscaper.

These deaths were not included as part of the total homicide count for 2018, though police have dedicated significant resources toward the investigation surrounding them.

Second firearm in as many days....taken off the street last night by ⁦⁦@TorontoPolice⁩ ⁦@TPS51Div⁩ officers in area of Parliament and Queen St E. A 38 year old male now in custody. pic.twitter.com/kGAnVQdFrr

Saunders says the Toronto Police Service will continue to combat gun violence, first and foremost, through "smarter policing" and by developing stronger relationships with at-risk communities.

"Every day, we're seeing more guns," he said. "That's one aspect that has to be looked at. The second piece is what's motivating people to use a gun to resolve issues."

However the gun violence piece works out, Saunders is confident that we'll see a lower homicide rate in Toronto next year at this time.

"I think this was a unique year where there was a lot of loss of life," said Saunders. "I do believe that next year will be a different year."