Eastern Avenue is Toronto's next street on the rise

Take a seat in one of the sunken, busted up red booths at Gale's Snack Bar, and you'll feel like time has hit a standstill.

Almost 100 years-old, this cash-only diner looks exactly like it did a decade ago, and regulars will tell you that it's the same as it was ten years before that too. 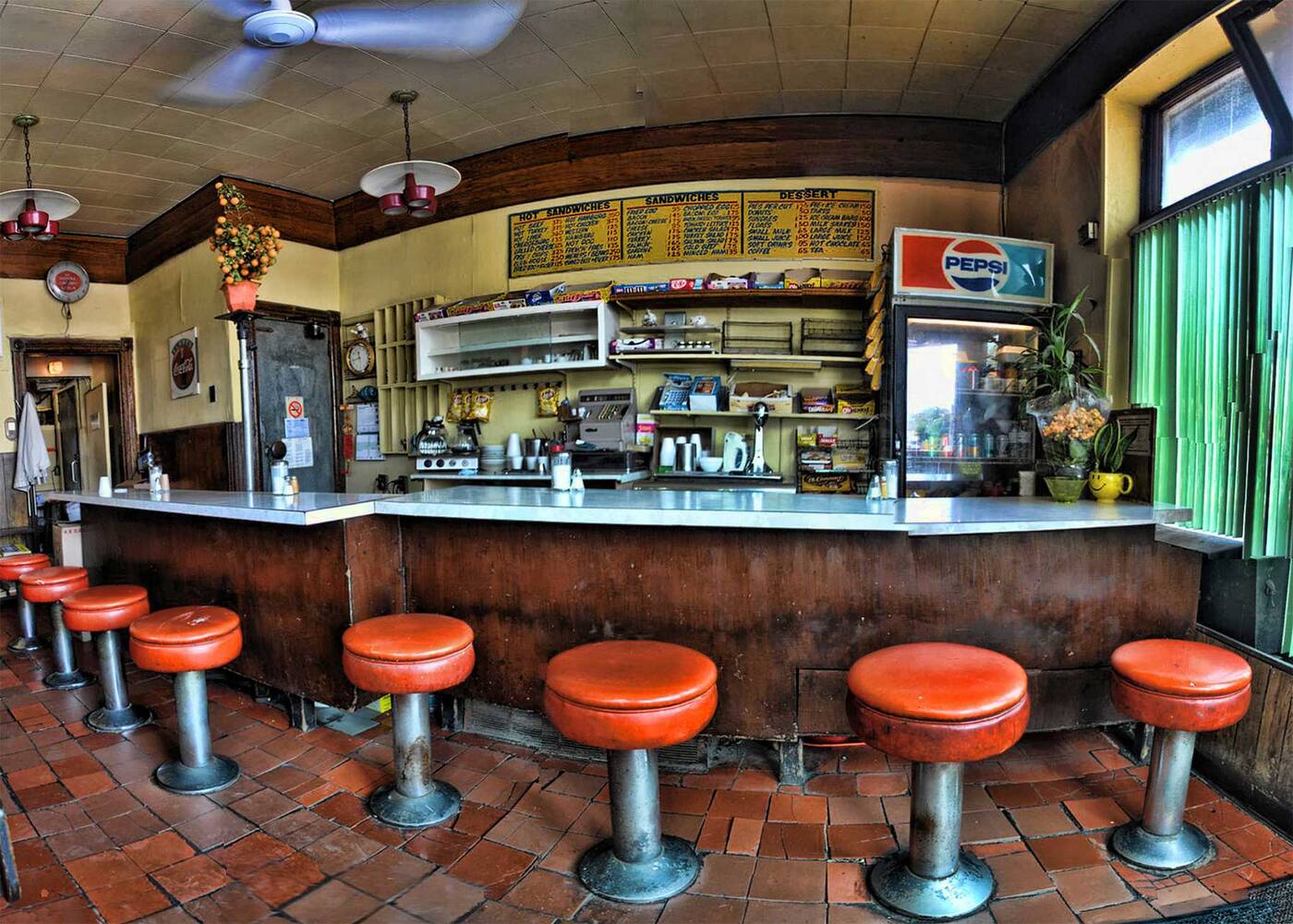 Gale's Snack Bar has been operating on Eastern Avenue for nearly 100 years. Photo by Sally Hunter.

Counters stacked high with gravy-covered dishes and crumpled napkins (it's just Eda working the front as her dad David Chan cooks in the back), the old diner is known for a menu of sandwiches like the $1.65 sardine servings that fly in the face of today's $100 wagyu affairs.

But look out past Gale's old aqua blinds, beyond the greasy window, and you can see that the bustling thoroughfare that is Eastern Avenue is rapidly changing. 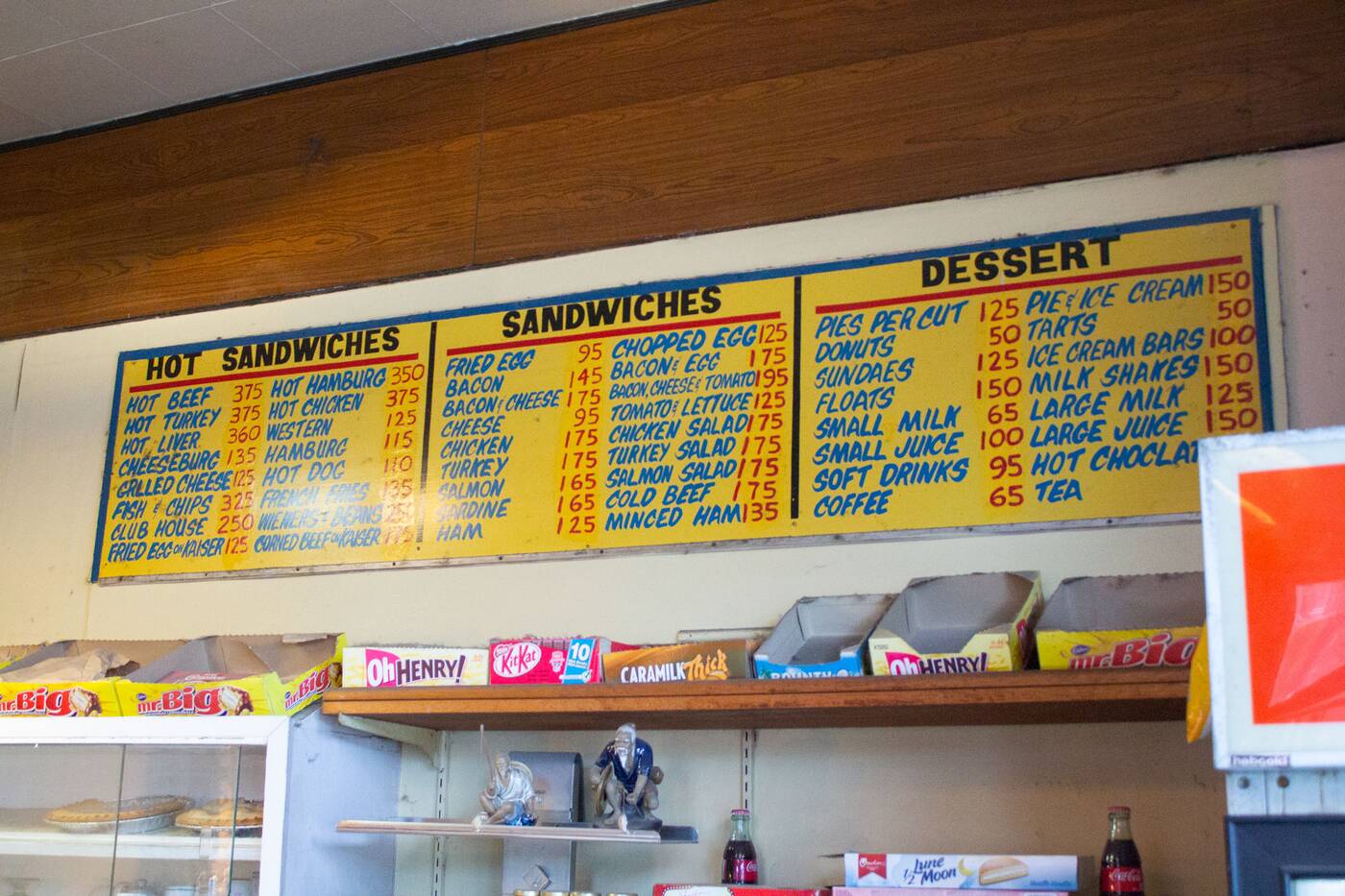 The prices at Gale's have stayed the same for decades. Photo by Tanya Mok.

This industrial street lined with dilapidated, decades-old homes has become the new site for a slew of sprawling projects from west of the Don River all the way to Coxwell.

With the Port Lands to the south, the condos of the Canary District to the west, and the burgeoning number of family-friendly residences just one block north on Queen, Eastern Avenue is surrounded by change. 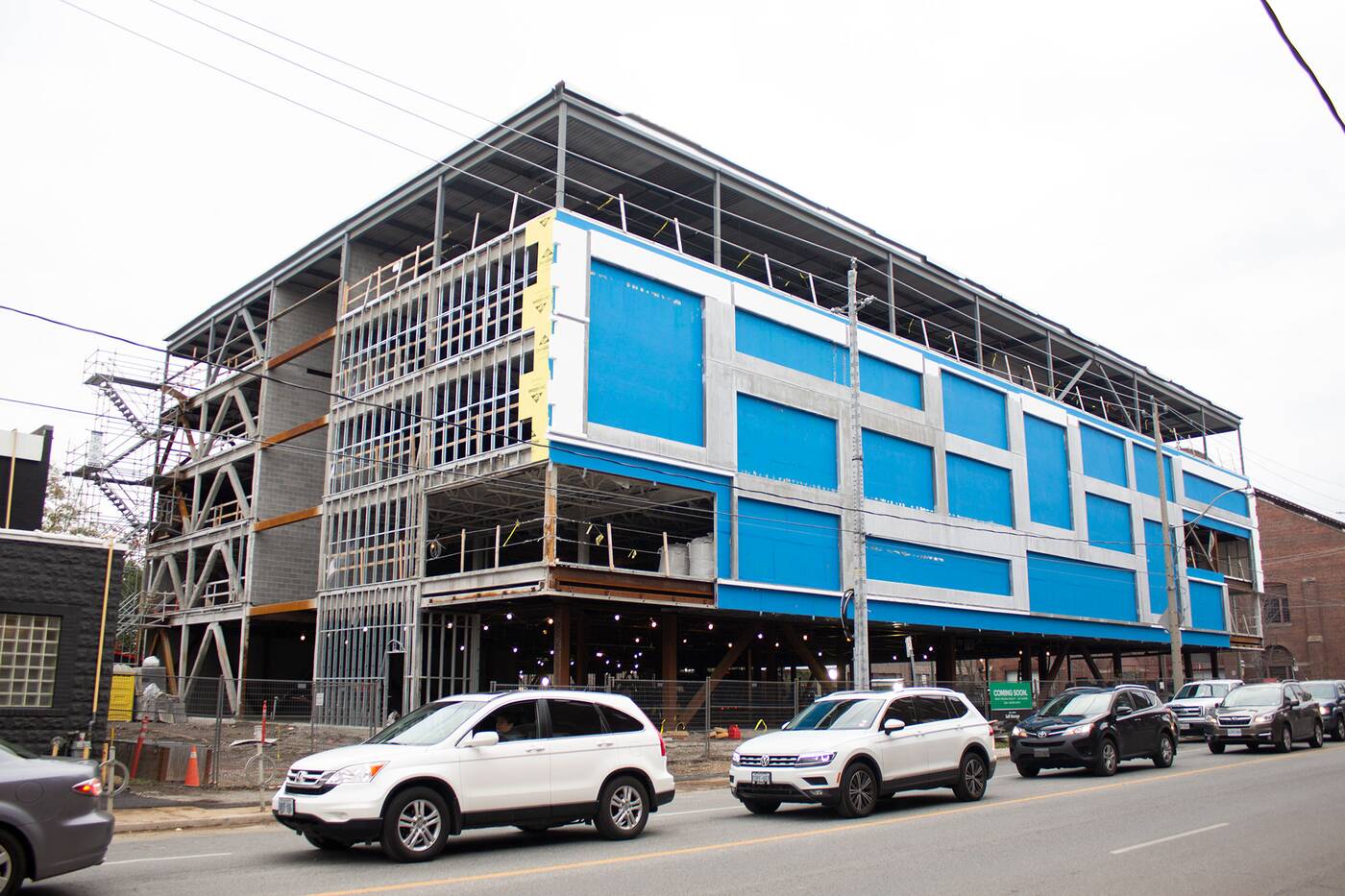 New developments are popping up all over Eastern Avenue including this under construction facility from All Canadian Self Storage. Photo by Tanya Mok.

These days, a majority of development seems to be happening on the stretch of Eastern with Carlaw as its axis, making Gale's the centerpoint of it all.

Transitioning to residential seems a strange fit for a neighbourhood that has embraced its designation as Toronto's Studio District, with five film studios on Eastern alone, not to mention the increasing number of recording studios that pop up around Laing Street. 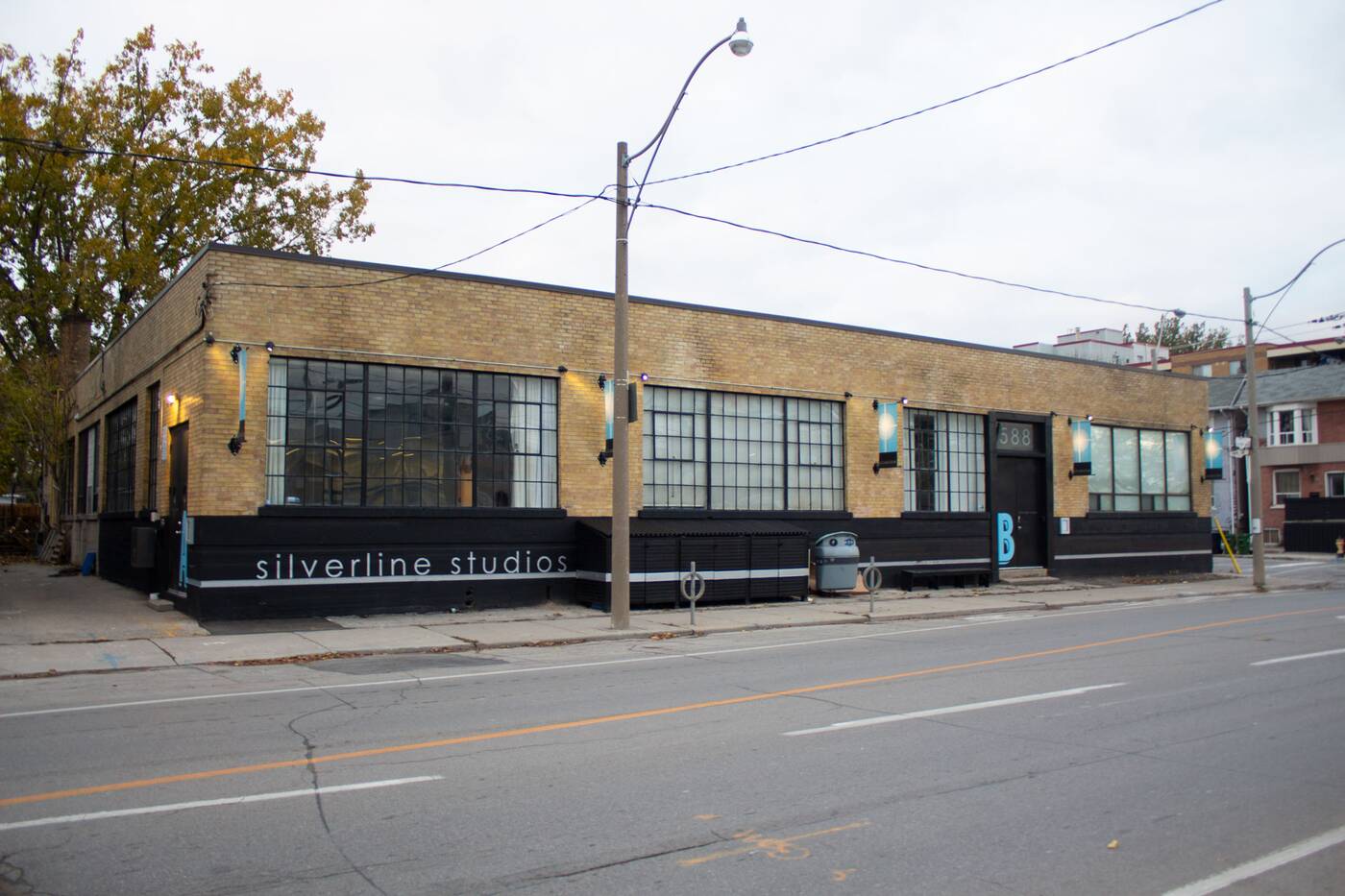 The area is known as the Studio District and is home to a handful of well-known film studios. Photo by Tanya Mok.

But as the city slowly runs out of room for massive high-rise projects in the downtown core, developers have turned their eye toward the spacious grounds of Eastern for expansion.

Projects like the Wonder Condo just west of Gale's will replace the old Weston Bakery with 286 residential loft units when it's finished in 2022. It'll also come equipped with a huge parking lot, introducing the potential for up to 242 new cars in the area. 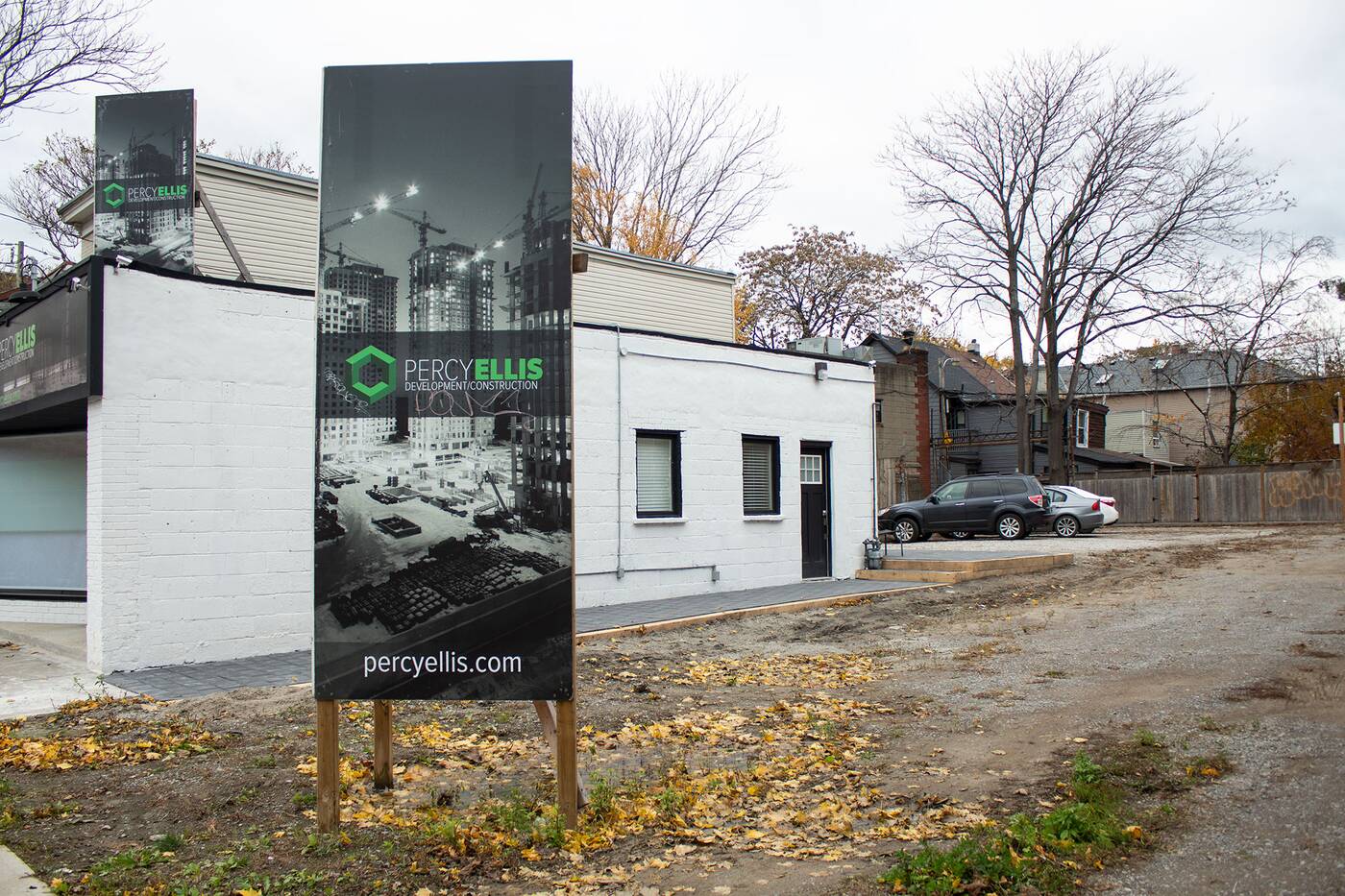 A Percy Ellis sign stands on the lot where the Hell's Angels clubhouse used to be. Photo by Tanya Mok.

Even the lot at 498 Eastern Ave., where the notorious old Hell's Angels clubhouse once commanded the neighbourhood, has lost its identity to the flood of real estate developments.

Razed just last year, the two-storey building which once had front doors made of steel and a hole in the wall where police ripped through with an industrial hook has been replaced by a lone sign from Percy Ellis, a developer with several planned projects along Eastern. 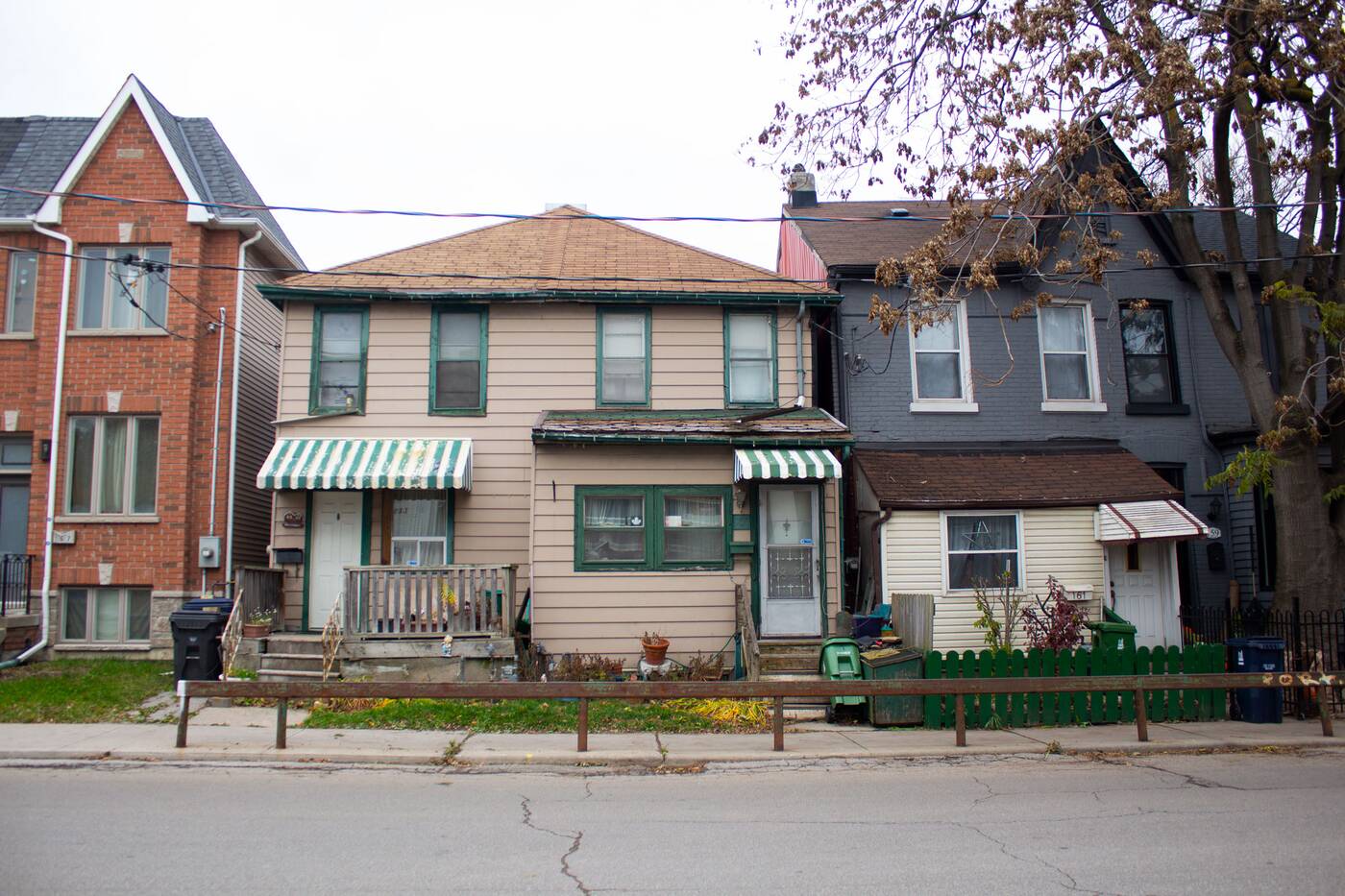 Meanwhile, closer toward Leslie St., the industrial buildings at 721 Eastern Ave. prepare for demolition, making way for something called the Urban Mobility Research and Development centre.

The seven-acre project by General Motors will essentially be a glamourized dealership, and it indeed will act as the offices for multiple car companies like Maven Car Sharing, Chevrolet, Buick, GMC, and Cadillac. 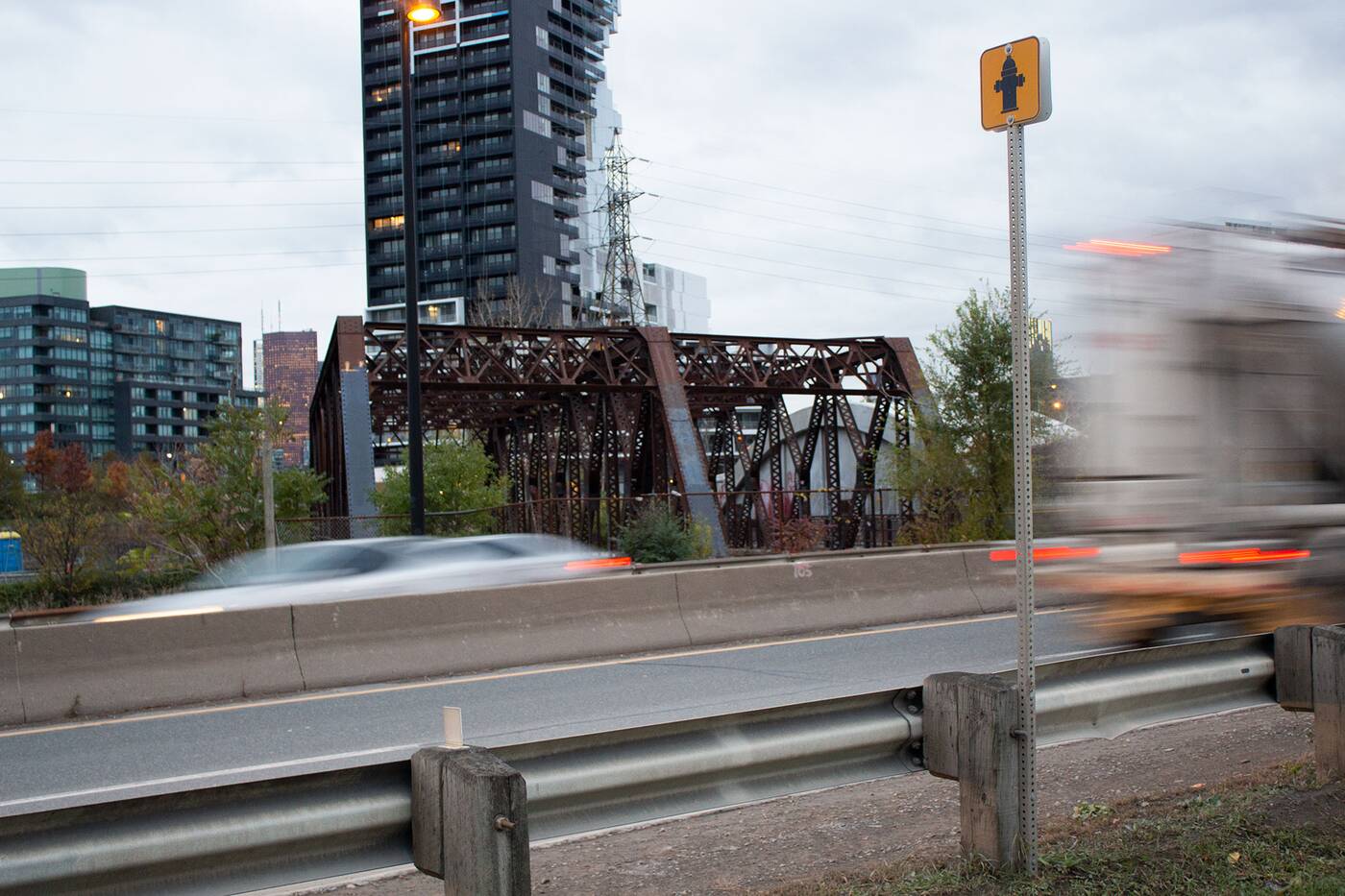 The old Eastern Avenue Bridge sits near a patch of land dominated by car dealerships. Photo by Tanya Mok.

If nothing else, this GM project feels more in line with Eastern Avenue's industrial identity than a smattering of polished condos.

The part of Eastern closest to the DVP (by the old Eastern Avenue Bridge) has long been considered the mecca of downtown dealerships after all, with brands like BMW, Toyota, Hyundai and BMW showing their wares on the same block. 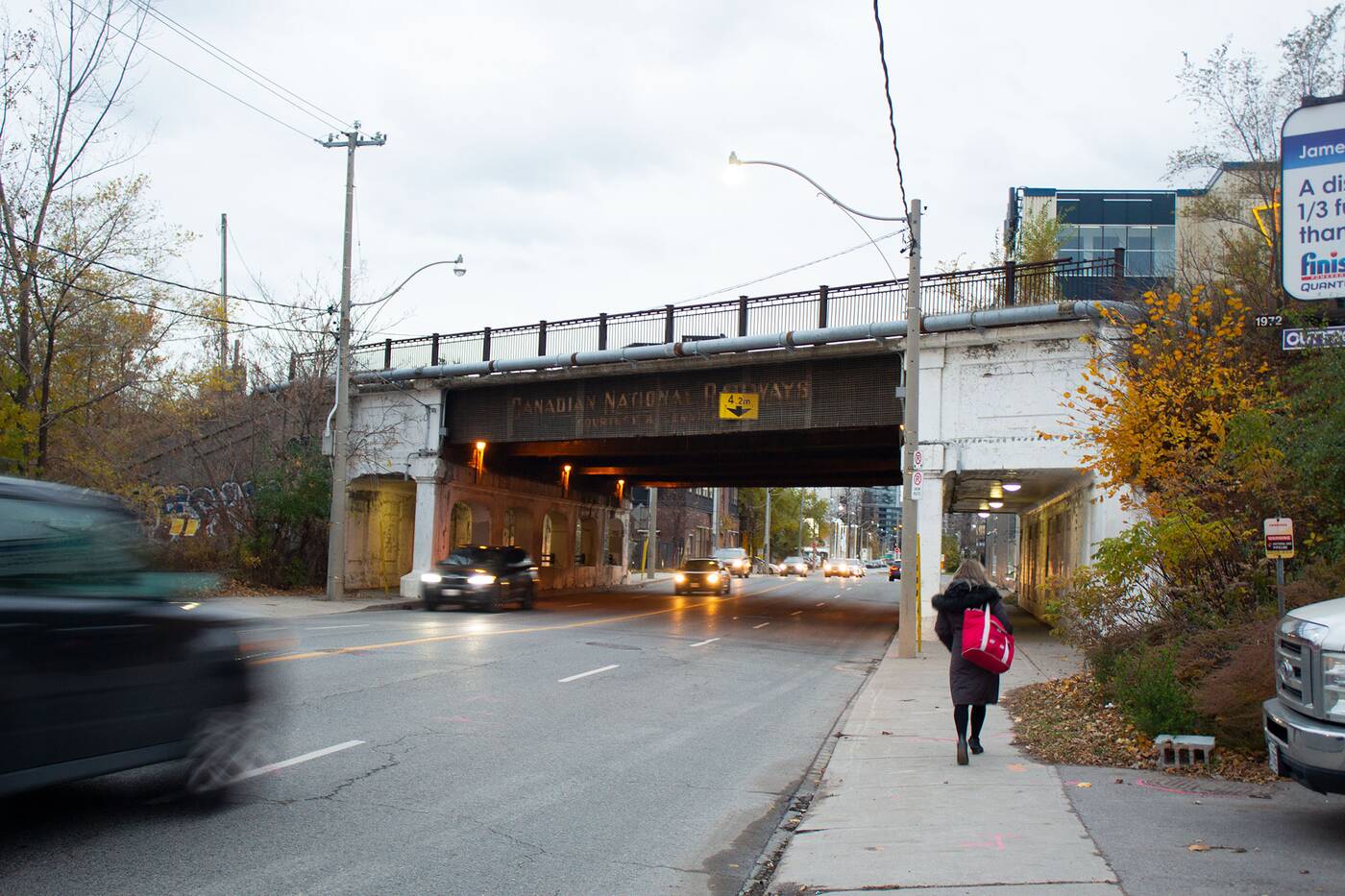 The area near the Broadview bridge consists mostly of large parking lots. Photo by Tanya Mok.

But the new projects also feel like a step backward from the more pedestrian-centric additions to the nighbourhood, like the bike lanes added in 2008, or even the neighbourhood's new cyclist-, runner-, and dog-friendly, Black Lab Brewing.

Sitting right at Leslie and Eastern, Black Lab will be the likely haunt for the influx of condo dwellers nearby before the area builds up some more.

And further east, the sprawling South Central Letter Processing Plant may not be going anywhere but Rorschach Brewing has given new life to an old mansion near Coxwell, and One Academy is gaining a reputation as the place to train for fans of races like Tough Mudder. 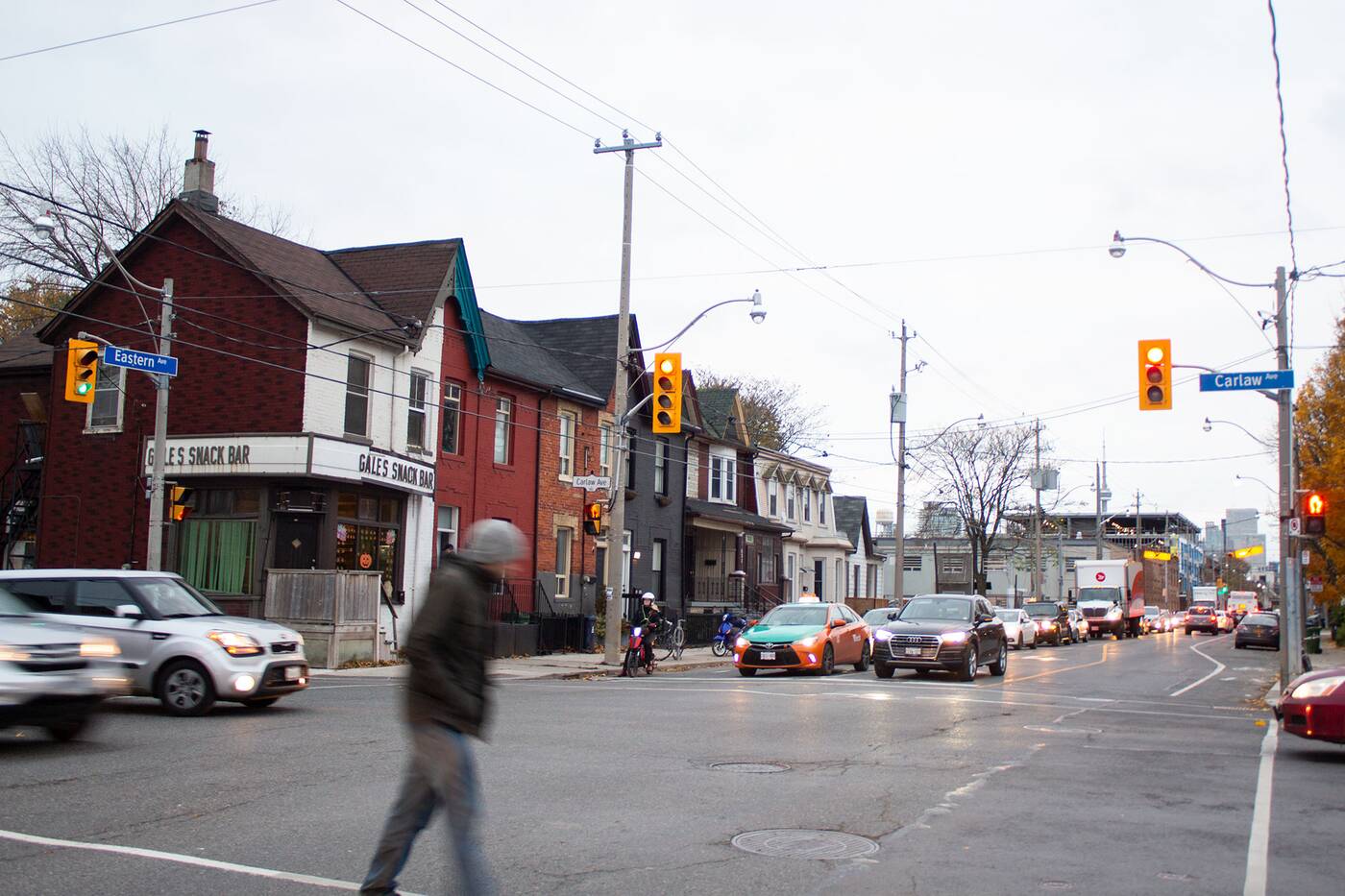 The corner of Carlaw and Eastern has Gale's on one corner and an auto shop on the other. Photo by Tanya Mok.

Meanwhile, to Eastern Avenue's longtime, aging residents, the new developments are bracketed along with all the other additions to the city that are neither affordable nor accessible.

Fifty-three year-old Tim C., who has lived in a detached house by the Jimmie Simpson Community Centre for 40 years, says he'd like to see more affordable housing. 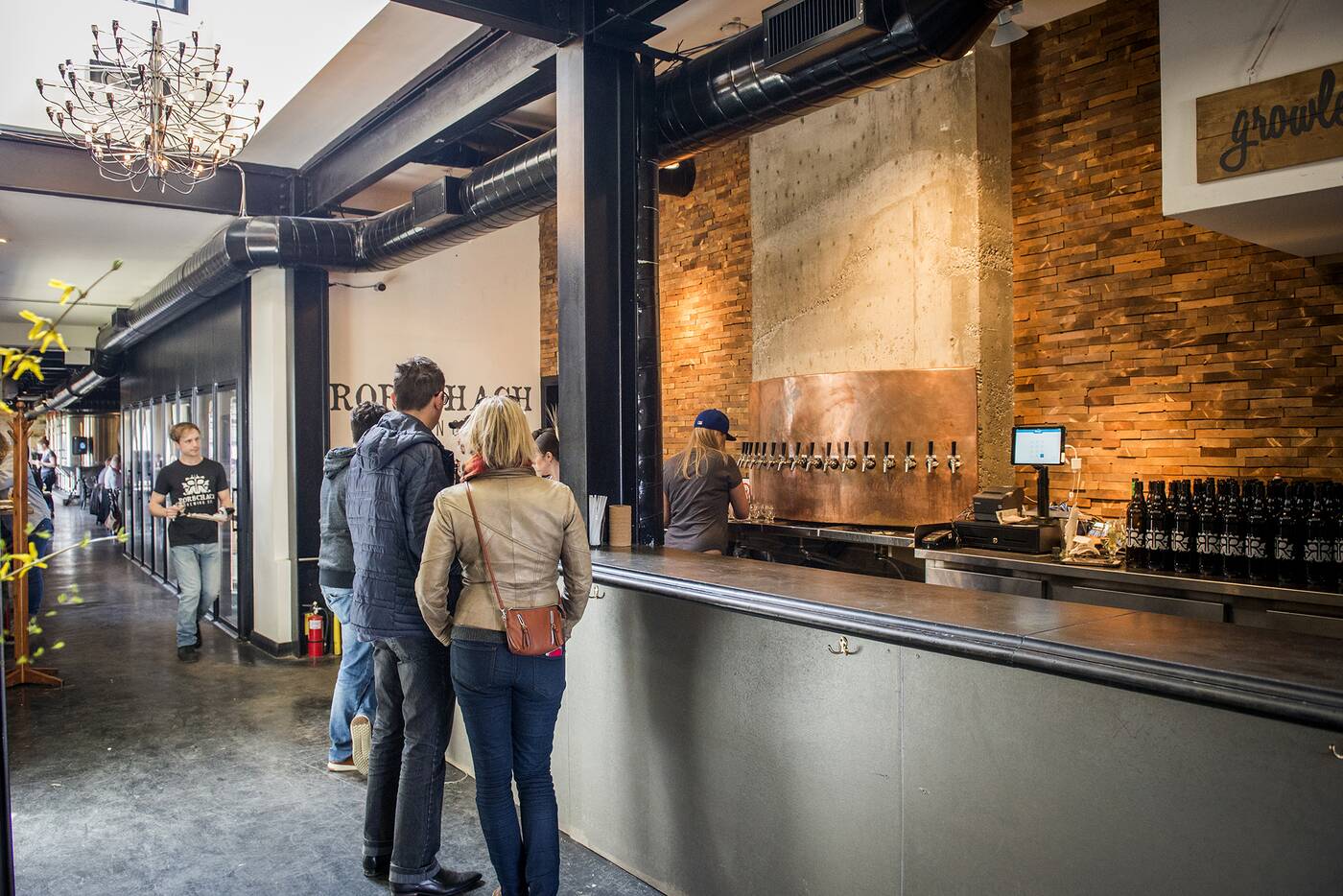 The taps at Rorschach Brewing are always serving up something new and interesting. Photo by Hector Vasquez.

Sipping on a coffee in one of Gale's dimply lit booths—he brings his own cushion from Dollarama to make up for the lumpy seats—Tim laments the fact that seniors don't seem to play a big part in area's development plans.

"It seems to be a lot of condos and it would be nice if it was more apartments," he says. "I feel it's impacting everyone." 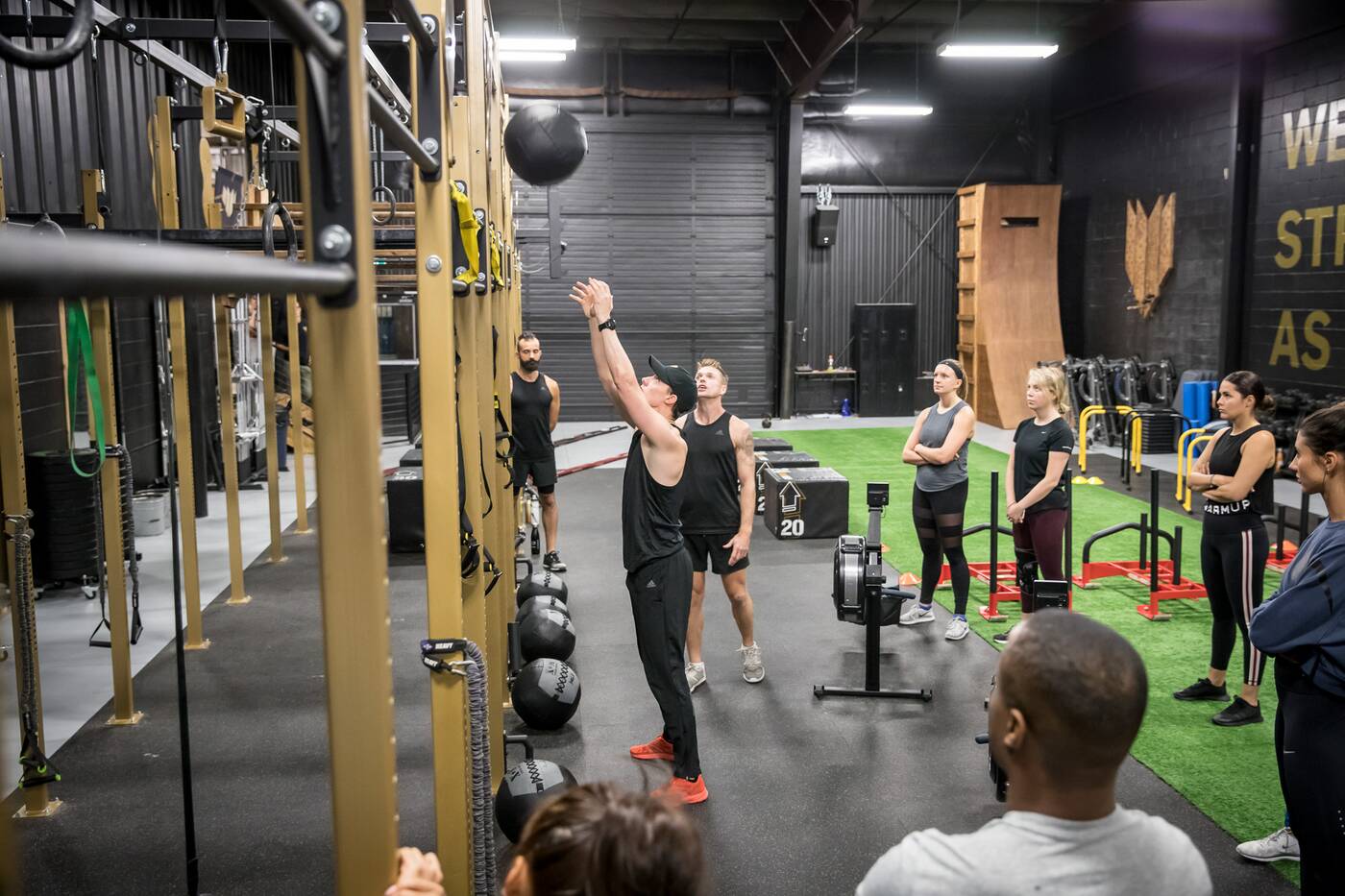 One Academy has transformed a space on Eastern Avenue into a fitness and training destination. Photo by Jesse Milns.

One by one, community institutions are slowly being replaced by towering condominiums. A church, a bakery, and even an old bike gang clubhouse might seem more appealing to locals than condos where units start in the $400,000s.

And while a younger generation readies itself to move into this aging industrial neighbourhood, there's a sense for the crowd that sits in Gale's that the future doesn't look bright for everyone.