To imagine what Toronto might look like in 2050, you need only to go back to 1982. That was 34 years ago. The city's skyline had yet to explode from the condo boom, trolley buses still ran on some streets, and vast areas like Liberty Village, the Distillery District, and the eastern waterfront were still industrial zones awaiting renewal. I could go on, but you get the idea.

The Toronto of today shows us just how much can change in a 34 year span. It also serves as a reminder that a few decades doesn't guarantee major progress in all areas of city development. Toronto's transit networks are not vastly different in 2016 than they were in 1982, though they should be by 2050.

There's obviously too many variables in play to make any surefire predictions about what Toronto will specifically look like 34 years from now. We might all be immersed in VR environments by then, but I'll take a shot at painting a conservative picture of the future of this city. Here are a few categories to track the changes on the horizon. 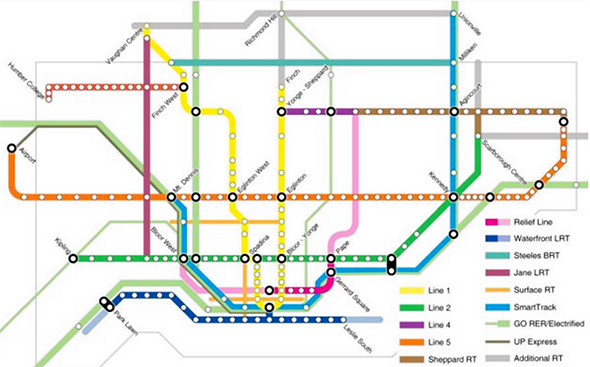 TRANSIT
Aside from projects already on the books (e.g. the Spadina extension, Eglinton Crosstown, Finch West LRT, Sheppard East LRT, and whatever replaces the Scarborough RT), Toronto really needs to expand its rapid transit network. The three most likely additions by 2050 are a Downtown/Yonge Relief Line, Waterfront LRT, and some version of John Tory's SmartTrack.

POPULATION
Yes, there will be a lot more people here in 2050. Toronto's population could reach 4 million people, while the GTA will be pushing towards 10 million. It's no joke when urban planners speak of the need to address transit and infrastructure needs now as the trends show almost alarming rates of growth in the absence of appropriate sustainability measures. 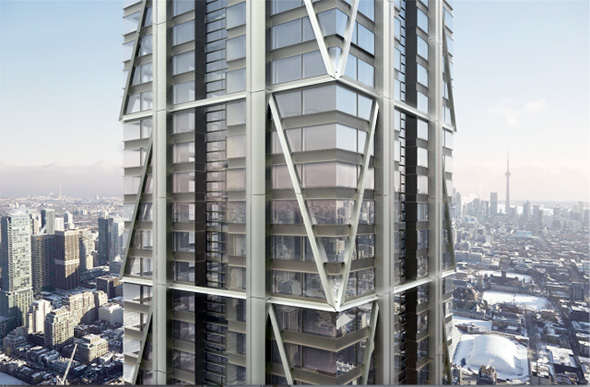 DEVELOPMENT
The city will continue to become more dense, but the most stark visible change will surely be the development of major areas like the Lower Don and Port Lands. 300 metre towers will be common around busy transit hubs, and condos will finally push into Parkdale. The once-quiet stretch of Dupont will be a major residential corridor just as south Etobicoke's population will spike with a new LRT.

COMPLETE STREETS
Those interested in urban planning should keep very close tabs on Eglinton Avenue right now. LRT construction has given rise to the Eglinton Connects project, which is a major effort towards rethinking the design of our streets. Expect our streets to focus more and more on pedestrians and cyclists over the next few decades as development intensifies. 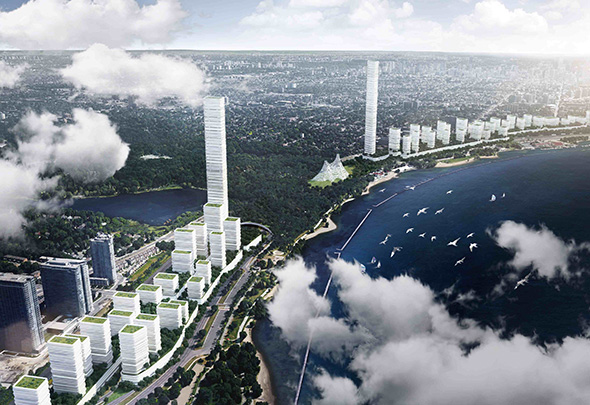 THE GARDINER
Will this thing still be standing in 2050? I'll go out on a limb and say that a future mayor is smart enough to see the potential in tearing it down and pursuing further development east along the city's waterfront. It will take a bold vision, but should this concrete relic still define our lakefront in 35 years?

THE PATH
The PATH system will stretch from the waterfront to Yonge and Bloor well before 2050. Who knows how far the underground city can expand? Imagine never having to walk outside in the winter again. 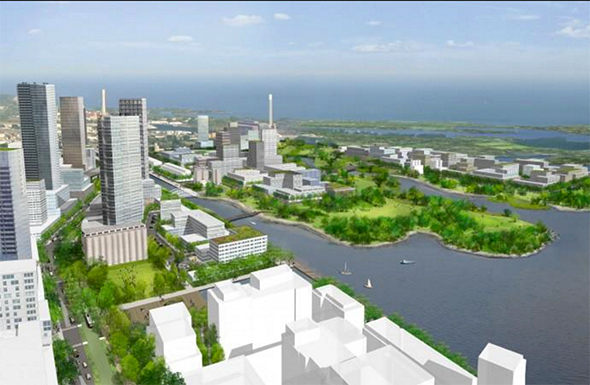 THE WATERFRONT
By 2050, the Toronto waterfront's transformation from post-industrial waste zone to a vibrant and inviting space should be complete. East Bayfront will be a mixed-use community with a bustling lakefront promenade, the mouth of the Don River will have been naturalized, Ontario Place will serve as a huge urban park, and Humber Bay shores will be as dense Liberty Village is today.

ENTERTAINMENT
When people aren't hooked to VR machines like Oculus Rift at all times, they might head out to watch Toronto's NFL team play in a sprawling stadium that doesn't exist today. The Leafs should have an inner-city rival, while places like the Hearn will serve as entertainment venues that allow for a mix of historical tourism and cutting edge technology. Mostly, we'll just stay inside, though. 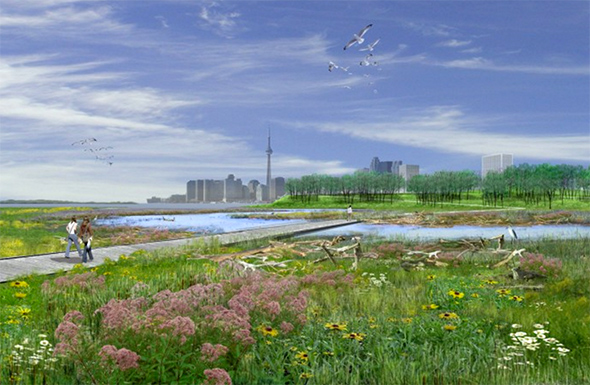 GREEN SPACE
With all this intensification, Toronto will need to get creative with the creation of new parks and green space options. Section 37 funds should help to subsidize the creation of new parks in rapidly intensifying areas, but more exciting is the prospect of a project like the Green Line coming to fruition and the potential posed by the revitalization of the Lower Don Lands.

What did I miss? Add your predictions in the comments.