Another salvo has been fired in the bizarre ongoing battle between two artists at the corner of Spadina and Richmond. This morning, for the second time in less than a year, a work crew armed with a pressure washer has scrubbed away a colourful tape measure painted at the street corner by artist Victor Fraser.

The original artwork, which consists of two colourful buttons, a thimble, and tape measure markings subtly etched into the sidewalk, was commissioned by the city in 2007. Created by artist Stephen Cruise, the piece is titled Uniform Measure/Stack.

Sadness in the hood! Removal of the beautiful alphabet at Spadina and Richmond. #whatsvictorupto pic.twitter.com/jq5z5wJPBx

Separately and without Cruise's permission, street artist Victor Fraser coloured in the tape measure etchings in 2006 using a semi-permanent mix of chalk and tempera. The addition remained in place for roughly eight years, leading many locals to believe the two pieces were by the same artist.

Then, without warning, the tape measure paint was removed by the city last November at the request of the original artist. The cost of the work was $623.

Fraser re-painted the tape measure in July, this time with letters instead of numbers, again without securing the permission of the city or the artist. 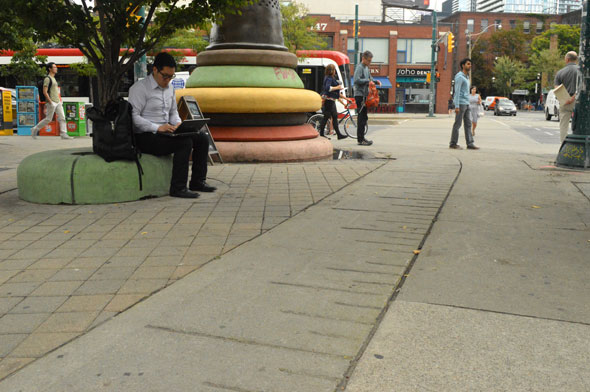 This morning, the pressure washers returned, according to a tweet. A visit to the corner earlier this afternoon confirmed that the artwork had indeed been removed.

In a phone conversation, Fraser said he didn't understand why his work had been removed a second time, especially given the warm reception it received earlier in the summer.

"I have an emotional investment in this piece," he said. "So many people came out and said 'I'm so glad you're doing this again.'"

"I would tell Mr. Cruise to really come and take a look at what's not there anymore."